posted 6 years ago
I am really interested in Sepp Holzer's use of mushrooms. I recall him saying that mushrooms were one of his main sources of income before Chernobyl, but he shifted when he couldn't sell anything and realized that it was an unstable form of income. He says he doesn't use wax on the logs, but I'm not sure if that's recommended for everywhere or just in the mountains. I recently starting using mycorrhizal mushrooms in order to help and stabilize my food forest, but I dont' recall Sepp writing about that. Can you explain how Sepp uses mycology as part of his permaculture plan?
Thanks,
John S
PDX OR

Luke Vaillancourt
Posts: 42
posted 6 years ago
Very interested in Sepp-shrooms as well
Zach Weiss
pollinator
Posts: 304
Location: Montana
93
posted 6 years ago
Sepp has been a great cultivator of the fungal kingdom. When Chernobyl happened the toxins were accumulated in the mushrooms and they were no longer fit for sale. Up until this time the mushrooms had been a huge portion of his business. After this disaster he made sure never to specialize in one thing to such a big extent. Josef takes a similar strategy with the Krameterhof today. For example this past year was a severely dry year. The EU even had to bailout the corn farmers as none of them had a successful crop. Such being the case the mushrooms were not doing much. Rather than going through a tremendous amount of work to try and continue cultivating mushrooms in such a dry year they directed their attention to crops that were having a bumper year because of the dry conditions, such as the cherries.

We have inoculated mushroom logs a couple of times during workshops. Mushrooms area tremendous crop to have as part of the permaculture plan as they provide multiple resources for an incredibly small amount of work. They provide a soil, food, medicine, and bioremediation resource, and are one of the most economically viable crops you can grow. With Sepp's techniques you inoculate the logs, set it up in the right microclimate, and then harvest. And make sure they're not a long hike from the house because your going to have to harvest them every day! When everything is done properly you can get 30 - 40 percent for softwoods and 40 - 50 percent for hard woods of the wet weight of the wood in mushrooms over the life of the log. When a log stops producing soak it for a couple of days and hit it on the end with a hammer and often times after this stress the mycelium will fruit again, sometimes for several years more.

He is not a big fan of wax, he said it falls off over time and insects or wildlife consume the mycelium. He has a wide variety of techniques depending on what tools are available. My favorite it so use an auger bit drilling holes into the log and then plugging them with plugs made from branches. 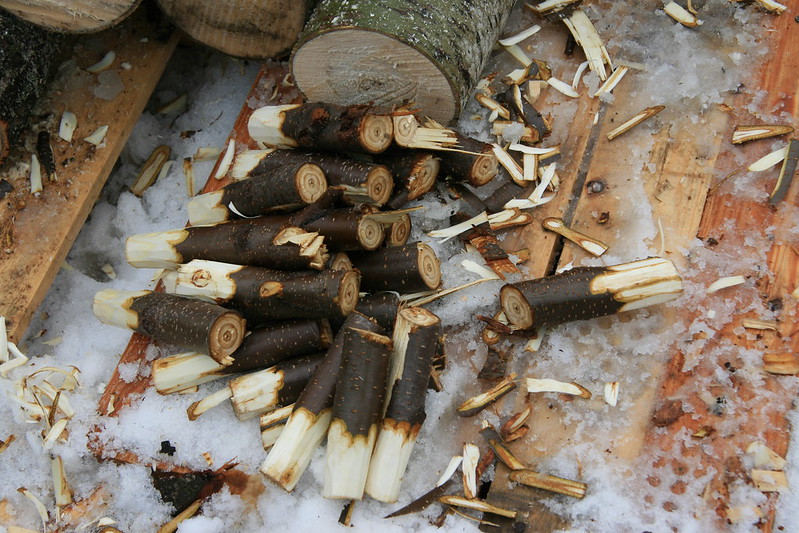 You can also use a chainsaw to make a notch with two bore cuts, stuff in the mycelium and then tape around it. 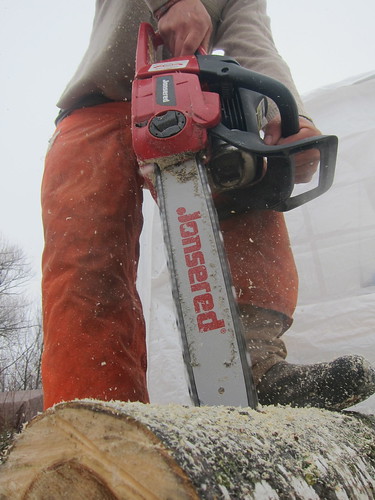 And then there is the method of cutting the log into sections, layering mycelium and then nailing it all together. This technique is particularly useful for inoculating stumps, and when successful the mushroom will fruit all around the stump, with the mycelium colonizing the root system. 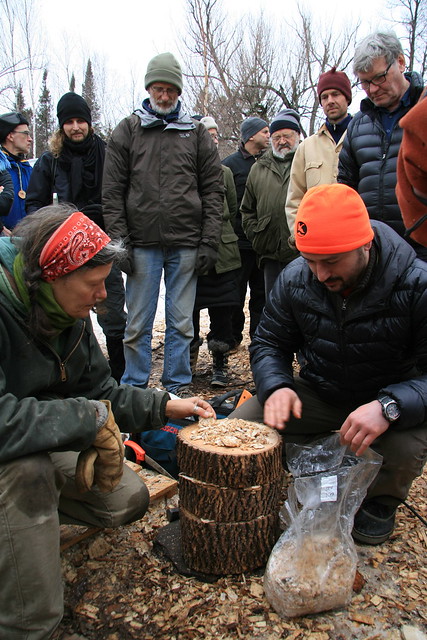 I don't recall him ever writing or talking about using mycorrhizal fungi either but I know he wouldn't hesitate to. This approach may be similar to why some pond builders don't bother seeding cattail, the seed travels so well in the wind that it is going to find it's way there is pretty short order. Creating such lush micro-climates the spores from mycorrhizal fungi are bound to take off before long. Inoculating the ground can certainly speed up the process.

Luke Vaillancourt
Posts: 42
posted 6 years ago
Wow thanks for the all the detailed responses this week Zach!

Emily Aaston
Posts: 138
Location: montana
29
posted 6 years ago
Awesome! Tony and I are planning to get some mushrooms going this summer. We were planning to use wax, but will re-think it now. It might be good to try all of these methods. Does Sepp have any favorite mushrooms?

Zach Weiss
pollinator
Posts: 304
Location: Montana
93
posted 6 years ago
Sepp has lots of favorite mushrooms and has grown pretty much everything you can imagine. He speaks quite endearingly about various medicinal mushrooms, as well as edibles, oyster and shiitake are the ones he mentions the most (probably because they are the most commonly cultivated strains). As with most other things the more unique the better.

Sepp has a unique perspective about the landscape. He has said before that he tries a little bit of everything on his property. Sometimes he gets unbelievable sick, sometimes he has euphoric experiences, you never know unless you try. Now this is not to tell people to go out and immediately ingest anything they can find, there most certainly are plants that will kill you with this kind of attitude. There are safe and logical ways to do this. One example is to rub some of the in question plant against your skin, then wait a couple of days and observe. If no reaction then you can try this at a concentration of veins. Again wait and observe any potential reaction. If it still seems safe then you can put some on your tongue and then spit it out. So on and so forth listening to your body for a potential reaction. Obviously this is not everyone's cup of tea but I found this most fascinating.

I'm very fond of Reishi, Turkey Tail, and the like. I would love to start cultivating Chaga in the future. In addition to supplying the highest quality medicines to a household growing valued medicinal mushrooms can be very profitable considering the inputs involved.