Sean P Brennan
Posts: 4
posted 6 years ago
I am 90% black locust is illegal in MA? Can anyone confirm? What about NH?

Posts: 7926
Location: Currently in Lake Stevens, WA. Home in Spokane
318
posted 6 years ago
Yep. Banned in MA. I do not know about NH though.
Ask Trees and Shrubs. They are in MA, but ship all over (when not prohibited - they should know.

Read the comments @ the bottom of this attachment: 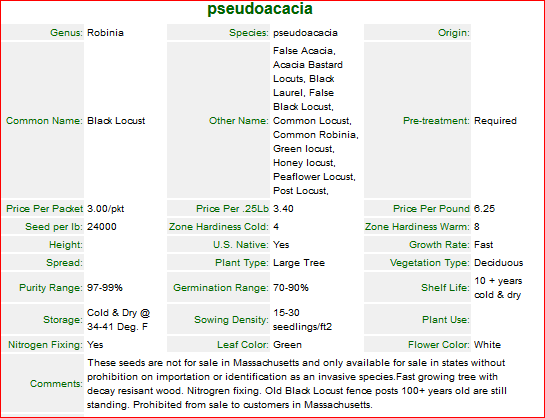 posted 6 years ago
Adler and dutch clover fixes as much nitrogen as black locust. Without blocking as much sunlight and for as long.
Adler drops as much leaves and clover probably produces as much biomass too.
After 10yrs the adler bows out and make room for your nut and fruit tree.
Which means more sunlight for fruit/nut production seeing as how at 10yrs old they grow less and need less nitrogen.
The dead alder wood can also return all the nutrients that it has mined from the subsoil to the food savannah.

Black Locust does have that stately look and if you plan on harvesting it to make fence post later that would be a use.
In the dry desert southwest it is a wonderful tree to mine its own water, fix nitrogen, block some of that 13 hours of 110F sun etc.
For the cloudly, cool, rainy nutrient-leached east coast Adler might be the plant to use.

Lance Kleckner
Posts: 123
Location: West Iowa
2
posted 6 years ago
You still can grow it easy enough since it is probably feral all over.

Lance Kleckner wrote:You still can grow it easy enough since it is probably feral all over.

I think it is funny that a state like Massachusetts thinks they can stop a plant from growing within it's borders when every state around it has the exact same plant.... Because plants clearly pay attention to human political boundaries...

I live in MA and have been considering other New England states to eventually move to because Massachusetts has a few problems inherent in living there, one being that they have some really crazy laws and fairly high taxes. The other primary thing is that comparatively your average person in the northern New England states are about 10 times more friendly than your average Massachusetts resident (I live near Boston... might as well be NYC on the friendliness scale). I was thinking about Vermont, New Hampshire or Maine for my eventual homestead destination, edging toward Vermont because I went to school out there.

My thought lately has been though, how unlikely it would be that you would ever actually get prosecuted for planting black locust. Now for sure you would not want to attempt to sell these things but what are the odds that a state inspector is going to come to your land and inspect all of your trees to ensure that none are black locust... Pretty slim I would wager, and an even slimmer chance that even if some state person or neighbor who would care saw the thing that they would even know what it was and that it was "controlled". EVEN IF all that happens they would still be required to prove that you knowingly planted the tree as I am pretty sure they can't prosecute you just for having an invasive growing, especially if you then say you will take it out right away.

So to summarize, I would NEVER advocate doing something illegal... and yet the larger the plot of land the more difficult it will be for anyone to ID every species found there. I am simply musing about the difficulties that the powers that be would have enforcing this specific and incredibly silly of a "law". Now granted I kind of understand the intention, as native plants are important to protect but with a clearly changing climate there is just no way to keep our vegetation the same as it was 100-200 years ago which is clearly what this legislation is about.

posted 6 years ago
Thanks R Scott that was the gist of my post... yours was much more succinct

Sean P Brennan
Posts: 4
posted 6 years ago
Thanks for the responses. Yea, massachusetts is crazy... I am probably moving to New Hampshire. I am interested in cultivated black locust mostly for firewood and also as a nitrogen fixing support species