Beth Mouse
Posts: 86
3
posted 8 years ago
Last year I did not keep up with weeding the guild rings beneath my fruit trees. The year before that, we had dug out the pasture grass in a nice wide ring below the 8 fruit trees we planted in our pasture and had then put chipped bark in this dug-out ring.

Now the pasture grass and weeds have grown back practically to the trunks and I am wondering if I should dig it out again or whether to sheet-mulch. I was hoping to actually plant some guild plants this year (blueberries and asparagus).

Also, I am not remembering how wide the rings need to be below each fruit tree. Anyone help with this would be appreciated.

Thanks,
Beth
G Freden
pollinator
Posts: 612
Location: West Yorkshire, UK
202
posted 8 years ago
I vote for sheet mulch. You keep the fertility and soil structure in place, and it's a lot less work than weeding; I've given up weeding, myself.

You can sheet mulch as much or as little as you like; I would probably do it where I was planting new shrubs, and under the tree--at least up to the tree's drip line, to control the grass.

You don't actually need to eliminate the grass from the area, just tip the balance back in the favour of the trees. I've found that grass doesn't really thrive in wood chips - at least the leaves grow lush, but the root snever form that really dense mat. You don't even need the cardboard if you mulch thickly enough and don't mind a bit of grass after you are done.

posted 8 years ago
Can you place chickens around them of a few days to scratch up the grass and fertilize?

Martin Bishop
Posts: 20
4
posted 8 years ago
Once complete, plant comfrey in a circle just Outside the dripline. It will keep grass from encroaching again. You can then plant Inside the dripline any herbs or other companion plants etc. 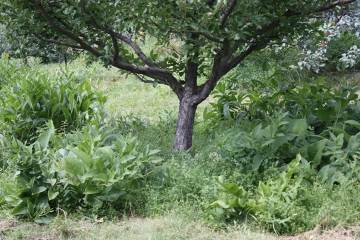 posted 8 years ago
Also plant daffodils, and other flowering bulbs that bloom just before your fruit tree. It will attract pollenizers and positive insects, and drive away voles, and other rodents you don't want there. Also, besides comfrey, plant dandelions, horsetails and other dynamic accumulators, so you can chop and drop a diversity of dynamic accumulating nutrient laden leafage. I know most people have never heard of planting comfrey, dandelions and horsetails. They will crowd out grass, which you definitely don't want, and encourage a full and lively soil food web, which you most definitely want.
John S
PDX OR

posted 8 years ago
What is the difference between grass and permaculture plantings with regard to the health of the tree itself?

Thanks for the pictures.

If anyone's done before-and-after comparisons, or side-by-side comparisons, I'd love to see pictures of that too.

My personal quest:
The in-laws are getting tired of hand-watering their mini orchard; but setting up irrigation conflicts with running the riding lawn-mower.
I would love to help set up irrigation, but can't make promises about being here to mow, weed, or water at any given time (medical and workshop and family stuff going on all over the place as always).
(Note that being too tired to keep caring for their beloved orchard, their way, is frustrating for them. The idea of doing things their way (frequent sprinkle watering, bare-dirt weeding) would be frustrating for me, not to mention I have other demands on my time. Non-interference may be the best policy, but I'm keeping an ear open for options. I'd like to know what I'm doing before I mess with other people's stuff, especially while they're grumpy/vulnerable. )

Just mulch and soaker (rather than spray) irrigation would feel like a minor triumph here, for me. Hand-weeding consistently will mean paying someone by the hour. It would need to be a finite transition period, after which the labor goes down significantly.
I know that comfrey behaves itself when undisturbed, but propagates like mad if shoveled or hoed. The lady of the house is pretty much attached to doing things her own way; I've seen similar gardeners get really frustrated with comfrey, and insist that it will die if they shovel it enough. This does not seem like a good year to explore this particular exercise in futility.

Climate is semi-arid sub-alpine; they have had much more success than the neighbors predicted gardening up here, but it's a lot of work the way they did / do it.
Unless I demonstrate true no-work food production (instead of sad little things that die of neglect while I'm off teaching workshops), they are unlikely to try a new method just on my suggestion.
Other experiments are in progress; hugels, snow-banking, native and near-native fruit options.

What I'd like to know here is more about is how to make the transition from grassy to "other," and how to make that "other" relatively tidy-looking or attractive.
More photos would be great.

Also, warnings about the pro's and cons, and actual work needed / consequences of neglect. Especially if anyone's done this on a shared orchard with more conventional owners / family members.

Many thanks,
Erica W

Erica Wisner wrote:
The in-laws are getting tired of hand-watering their mini orchard; but setting up irrigation conflicts with running the riding lawn-mower.

If they insist on the lawn mower, lots of options go off the table like soaker hoses & mulch or net & pan system to catch water. Could they set the level of mower high enough so it doesn't hit the soaker hose?

The only other thing I can think of is burying an unglazed pot near each tree (page 383 of the PDM). I think there are versions of this that use plastic soda bottles, filled up and inverted and then stuck in the soil. These are trickle systems which would last a week I guess.

Erica Wisner wrote:What is the difference between grass and permaculture plantings with regard to the health of the tree itself?

I think grass competes with the tree whereas comfrey helps it by mulching and fertilizing.

posted 8 years ago
Grass forms a really dense root mat in exactly the soil zone where the trees want their own roots to be.

Comfrey has deeper roots so doesn't compete and the shade it provides the soil both smothers grasses and keeps the soil moist and mulched.

Beth Mouse
Posts: 86
3
posted 8 years ago
When you say to plant comfrey at the dripline, do you mean the dripline of the young tree I just planted or much further out for how big the tree will eventually become?

Beth Mouse
Posts: 86
3
posted 8 years ago
I guess my general question in creating guilds is, am I supposed to remove most grass in a circle around fruit trees out to the drip line of the mature tree or just to dripline of young tree?

posted 8 years ago
This is spring - a Greengage tree guild with Elder, Blackcurrant, Nanking Cherry, strawberries, Comfrey, Rhubarb etc and poultry. The trees are very productive, the blackcurrant less so.

I never cut the grass - although I clear around the stem of trees a little and the chickens, ducks, geese and turkeys do the rest. 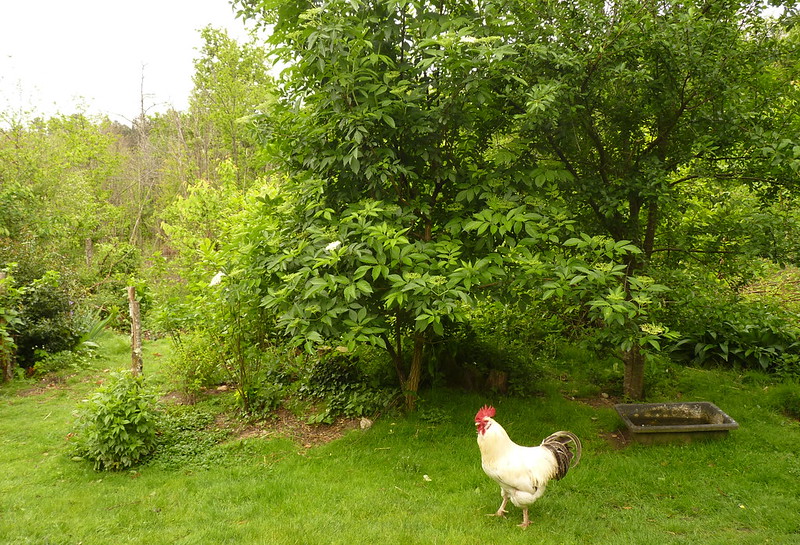 posted 8 years ago
I would remove the grass out to the dripline of the mature tree. You want the roots to grow out into that area. Most fruit trees have roots that grow out much more than down, so it's an important thing to do. Besides, there's so much beauty, creativity, and other food that you can pack in there.
John S
PDX OR