Cory Allan
Posts: 61
Location: Hamilton, Ontario, Canada
2
posted 10 years ago
Here's my situation - I just moved from a small sandy lot to a large heavy clay lot. It isn't uniform, as parts of it appear to have been sodded (after a recent addition to the house within the past 5 years, I presume) and some of it was bare clay dirt and gravel/rubble that had been piled on and/or smoothed over various dirt-bike trails, ramps and rubble that had been buried in the yard. I moved in during March and the bare dirt was muck - heavy sticky clay clay which would sink in to the ankles when walked upon.

One of the first things I did early spring was to sow dutch white clover and grass seed in an attempt to cover the bare dirt. Probably too early, given the clay soil stayed much wetter and cooler than what I was used to on my older lot. Much of the seed either washed away into clumps or didn't germinate. I'm on a water cistern without city water service, so I don't have the luxury of wasting water on sprinklers and hoses - just mother nature, so at least the soggy spring clay works in my favor as it holds water quite well in the spring growing season.

I should have taken some pictures when I moved in (before I stumbled upon this site). I'm attaching some pictures which, from a distance gives the impression of a fairly green lawn. However, the close-ups will reveal large portions of the lawn are 90% or more weeds over bare dirt, with a few blades of grass and clover. If anyone can identify the weeds, I would appreciate it.

Anyhow, I'm determined to take the slow, cheap and lazy organic approach in an effort to improve the soil fertility and grass/weed ratio, even if it takes a number of years. This will all be part of a long-term landscaping plan to add some much-needed tress and plants to this otherwise barren lot, so the lawn space will slowly diminish to a more manageable  supporting cast member.

Other than an occasion in which a friend of mine scalped the lawn mid-summer (adding to the stress of a hot and very dry summer), I've kept a fairly high mowing height (2-3" I'd guess). I'm moving it to the maximum for now on. I've also purchased an organic alfalfa-based lawn fertilizer (5-2-5), which was the best I could find locally on short notice, as it's now time for autumn feeding. I haven't been able to find a retailer that carries the Ringer brand anywhere around here (near Toronto, Ontario).

I'll gladly take any tips and feedback and keep you informed on the progress. 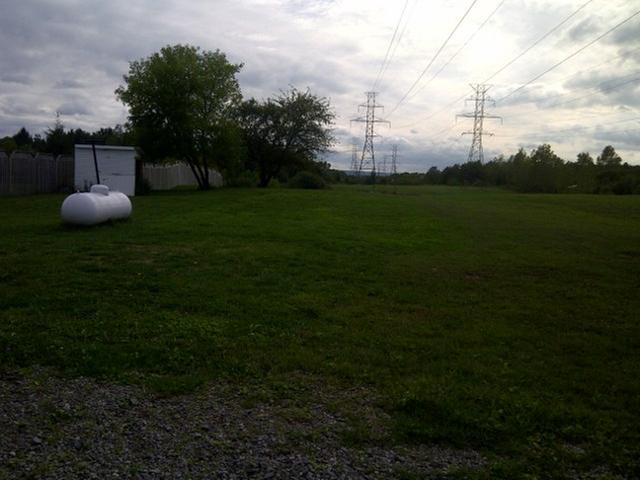 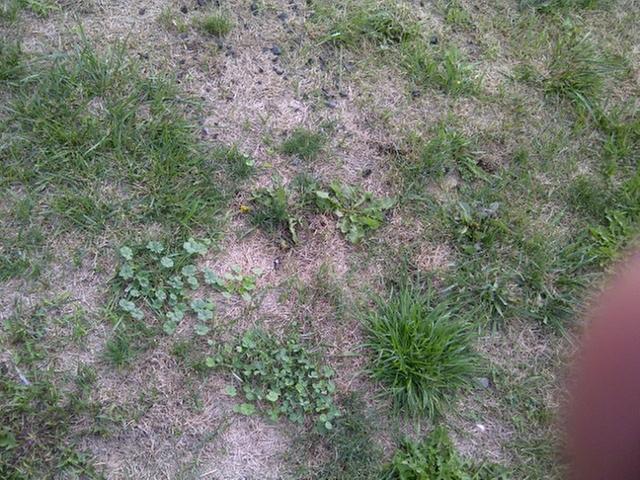 Cory Allan
Posts: 61
Location: Hamilton, Ontario, Canada
2
posted 10 years ago
Is there a way to attach more than two photos per message?

Here are some more close-ups of some problem areas. Weed identification anyone? 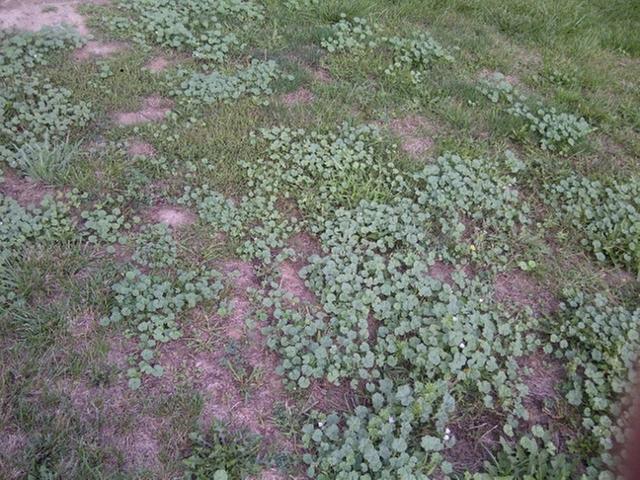 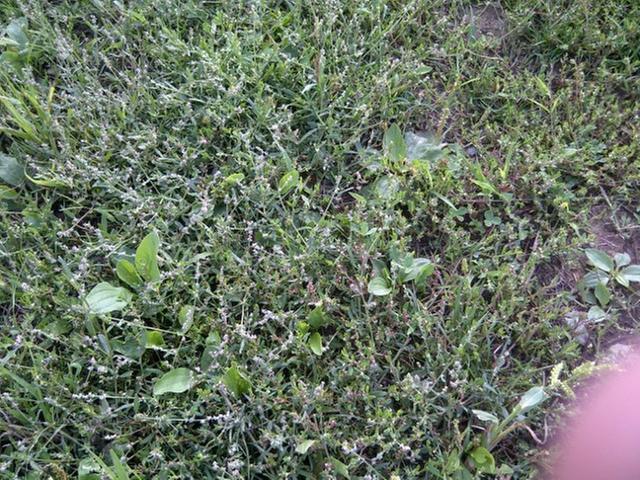 Cory Allan
Posts: 61
Location: Hamilton, Ontario, Canada
2
posted 10 years ago
Here is an (almost) 2ft hole I dug with a shovel. I could have went with a larger hole, as after about 10 minutes I couldn't get any deeper through the hard clay and gravel at the lower layer.

No signs of any critters or worms.

I turned this hole into a worm pit using all sorts of scrub I found laying around (a few twigs, weeds I pulled from the gravel driveway, and some apples laying around one of the only trees on the property lol).
IMG-20110906-00349.jpg 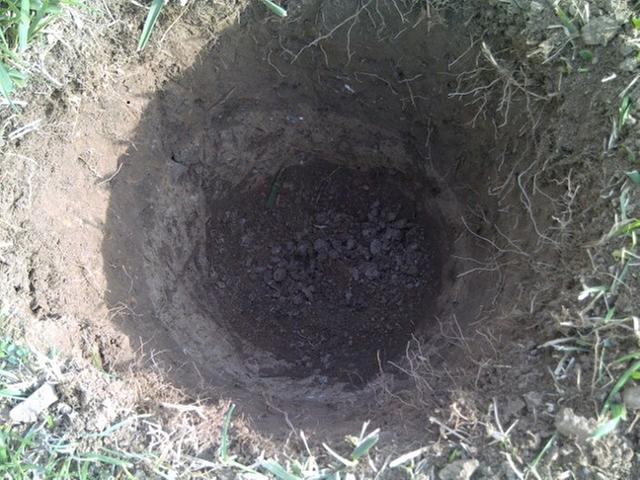 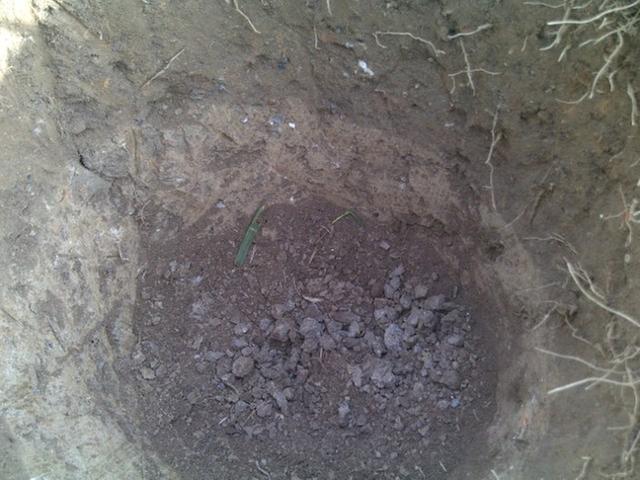 Aljaz Plankl
Posts: 386
14
posted 10 years ago
mallow, dandelion, plantago if you ever get hungry.

posted 9 years ago
^i also noticed that, and the mallow "fruits" are pretty tasty

Jeanine Gurley Jacildone
pollinator
Posts: 1459
Location: Midlands, South Carolina Zone 7b/8a
36
posted 9 years ago
Cory, I like your worm pit - I think that is going to be the key to turning the 'dirt' into living earth.

I did the same thing about 5 or 6 years ago when I first decided to get out of the chemical lawn. I cheated though

I bought red wigglers and dropped them in the holes along with some tasty kitchen trash.

I really need to take some pics of the earth now and I still have spots where it looks pretty close to they way it did when we moved here. Some of the places now are sooo black and it goes down a bit more than the depth of a shovel blade (used to be about 3 inches).

I can't tell what the non-grass plants are - can you take pics a little closer up?

(personally I think your lawn is looking great)

Roy Haney
Posts: 5
posted 9 years ago
Had the same problem in a place that I decided would be a garden. Problem was that it had so much clap seeds cooked and water washed off. It was so bad the saw briers died.
The first year I tried to turn it to break the hard pan. It brock the plow.
I planted on sratched dirt black eye peas that I bought from the grocery. What came up I tilled into the soild while green.
The next year I was able to get a couple of inches deeper and planted suger snap in the spring and then buck wheat later. Both I tilled in while still green.
The third year was easy plowing and rich soil. I still tilled in early for maximum richness. By the end of the third year people were saying that it was easy for me to grow stuff I had good soil, If they had that soil they would too.
The main help was when I was able to get a shank drill to rip up for drainage. I ripped it but what the big benifit was organic leached down and the good stuff went with them (Worms nad such) that got them deep enough to survive the heat.
Cory Allan
Posts: 61
Location: Hamilton, Ontario, Canada
2
posted 9 years ago
An update - the clover has made a big difference. Much of the clover I seeded last year has grown in to the worst parts of the lawn. I continue with the high-mowing routine and things are looking much better already, despite a very hot and dry May. There are hardly any bare patches now and I think it will hold up much better through the dry season (July and August) when the weeds dominated last year. I seeded more clover this spring, but I don't think much germinated due to the lack of rain, but I've got a decent cover of clover where the grass was weakest and overall the grass looks healthier with the nitrogen support of the clover. I'm not going to bother fertilizing until the fall.

I've also planted a bunch of fruit and nut trees in the sunniest area, mulched them and guilded them with comfrey, nasturtiums, chives and a few other assorted support perennials. I'll be slowly expanding the tree guilds outwards to keep up with the root and drip lines as time and material allows. To be honest, I'm looking to transition from a lawn as the dominant feature to a minor player in a forest garden landscape - some lawn paths and maybe one or two clearings should be all that eventually remains. What grass I do keep should be in much better shape by then, due to the soil improvements and some shade from the blistering sun. It'll take a number of years, working a bit at a time at planting the woodies, followed by sheet mulching, shrubs and supporting perennial layers. I'm hoping by the time my lawn tractor grows old, I won't need any more than an old fashioned manual mower.

I didn't notice a huge difference where the worm pits were dug last year, but we had an unusually dry fall, winter and spring, so I don't think it had the chance to break down much. I've noticed more worm activity in the few weeks since I've sheet mulched around the trees.

I'll have to add a photo or two after I cut the lawn, it's overdue

Lloyd George
Posts: 159
posted 9 years ago
the clover is a good move, as is the worm pit...you could dig one of those every ten feet or so, just as you feel like it..but smaller..so you don't wind up with low spots..if you go down to that gravel layer, that will help drainage...Consider buckwheat as well..I am trying to make better soil in on the surface of mars..<mt front yard> and that is one of hte things I am doing..bust up a bed of whatever shape I feel like with the tiller, let it go a week or two, to let what weeds are going to recover come back a bit then dig it again..and sow buck wheat in behind...nitrogen fixer, green manure, and some chicken and goat food, all in one...Buckwheat is a deep rooted critter...will dig a long ways...