Dale Hodgins
Posts: 9002
Location: Victoria British Columbia-Canada
670
posted 6 years ago
I have often been asked to help re-pot trees and bushes that have become too large for the existing pot. It is standard practice to put a few rocks or bits of broken pots in the bottom, to facilitate drainage. Almost always, I find that the old drain rocks are completely surrounded by soil and that the drain hole is plugged with roots. Pots are more likely to be over watered than a larger area of soil, and they are more likely to become completely dry when forgotten for a while. The tray beneath the pot often stores water from pots that drain out too well. The plant sends roots through the drain hole, in search of that water. I don't grow anything of my own in pots. Too much pissing around. But, for city dwellers on balconies and patios, they are needed.

Hugelkultur pots --- Rather than using drain rock at the bottom, I now use wood and a variety of garden trash. My intent is to build a drain that won't clog right away and to create a filter, so that it takes longer for soil particles to reach the drain hole. The new drain material also absorbs water and releases it slowly. I start off with large sticks on the bottom. They are chopped up with my loppers. Then I incorporate all of the leaves, stems and general trash that accumulates from other potted plants that have died. In the example below, my friend had accumulated 5 grocery bags of trimmings that spent a few months in the bags. I was asked to haul this stuff to the organics dump and to buy a bag of soil.

I explained that soil is made from dead plant material and it doesn't come in bags. All of this trash was put on top of the wood. I stood in the giant pot and scrunched it all down. Then I put in the root filter --- Many trees and bushes that are pot bound, will grow a thick mat of fine roots. Even when not in a pot, some bushes do this. When I remove unwanted specimens, I shake all of the dirt from the fine roots, and save them for potting tasks. The big pot received a 2 inch layer of root filter. This will slow the migration of soil into the hugelkultur drain. I absolutely hate those plastic filter cloths. My root filter does the job without poisoning the world with plastic.

The photos are from bottom to top. The largest wood isn't visible, since I thought of documenting the process after I was well into it. Dirty hands and cell phone cameras don't go well together.
IMAG5977.jpg 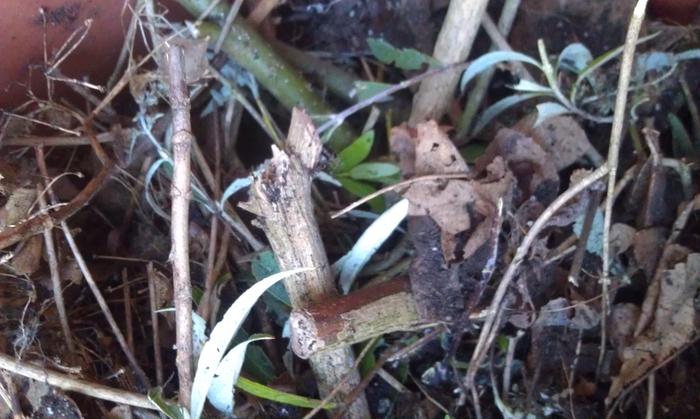 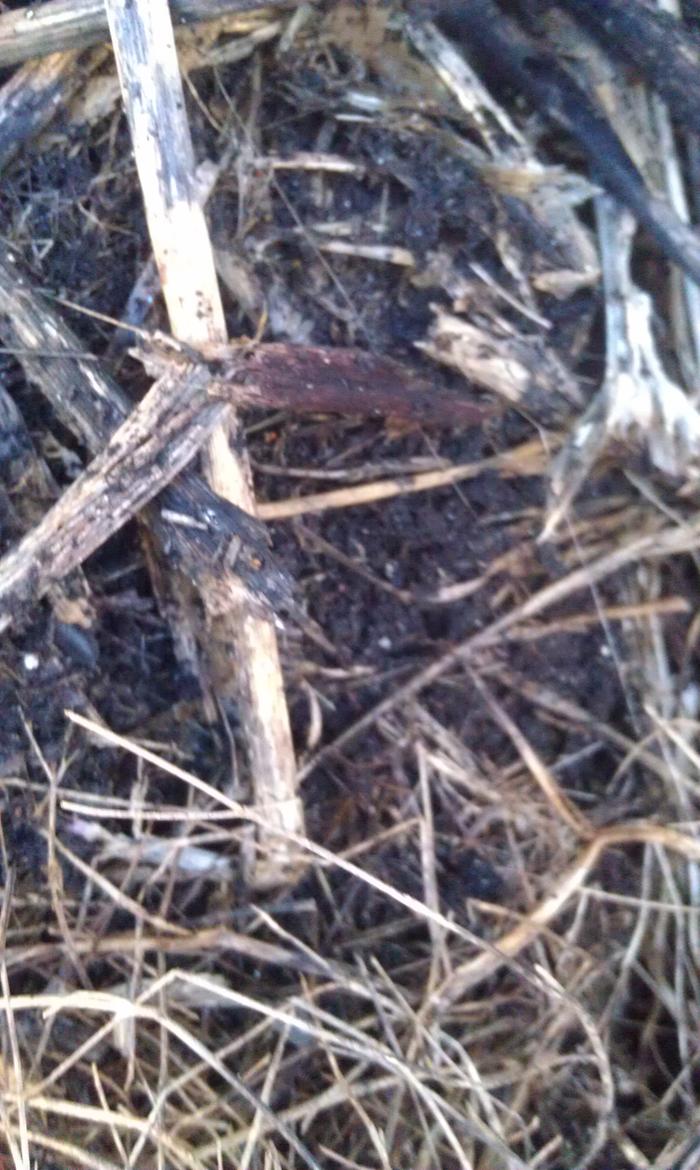 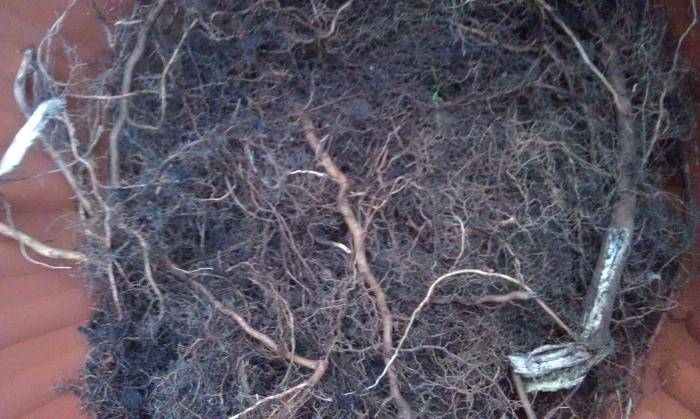 posted 6 years ago
I've done hugelpots with good success. Ants are more likely to invade the pot, I've found, but overall it's been worth doing. I don't put fresh garden stuff in there, just chunks of punky wood soaked in water or water mixed with urine.

kara mia
Posts: 4
1
posted 6 years ago
Brilliant!!! I've seen some stuff re hugel-style approach in pots. One person was comparing vertical to horizontal placement of the wood elements, and observing the wicking effects, like you were telling me about for my beloved stump, which was interesting...vertical was winning. But you're one step further, using the "dirt to be" materials (rather than the bagged dirt it became). And love the use of the fibrous roots as a filter!!! It's also reminding me a bit of the lazy-lasagne, where the sod is flipped so you have this fibrousy//soily layer closer to the top for planting in. Whether we choose or are forced to grow in pots, this is great info, thanks for the share, it adds to our toolkit for incorporating principles no matter the situation or space (says the one who maybe micro hugels with twigs and salad trimmings in bed edges when no one is looking, hehehehe)

Meryt Helmer
Posts: 395
Location: west marin, bay area california. sandy loam, well drained, acidic soil and lots of shade
15
posted 6 years ago
I did this with my spider plants I have inside and they are all very very happy and thriving even if I forget to water them for a long time they seem happier than any other spider plants I have had. spider plants are easy to grow but they are doing really good with the wood buried in their planters.
Dale Hodgins
Posts: 9002
Location: Victoria British Columbia-Canada
670
posted 6 years ago

Thank you mia. Editing can be fun.

Fine roots can also be used to line those wire enclosure types of hanging baskets that usually employ coconut waste for soil containment. The roots aren't as uniform, but they are great for drainage. a lining of leaves can stop them from draining too quickly. Larger roots can stick above the soil for plants that want support, or roots could be trailed, to allow climbers to ascend from the ground or from lower pots. The boom and bust water cycle for container plants can be extreme. I have some of those baskets. I want to try hugelkulture in a clay slip, for the bottom third and against the sides.

Here's another idea --- We all have a few unwanted tea cups or bowls. If they were placed upright at the bottom of any type of pot, a reservoir would be established. Many pots are grossly over watered occasionally. Water from the dish could carry the plants through the drought. Some plants won't like a super wet spot, but I'll bet that the majority will send roots to the dish. Root rot usually occurs when all roots are drowned and they can't breathe. My little stream has millions of healthy rootlets sticking into it from plants further up the bank. I'm going to try this the next time I pot something.

Dale Hodgins
Posts: 9002
Location: Victoria British Columbia-Canada
670
posted 5 years ago
I've potted some hanging baskets, using leaves and kitchen trash as part of the filter. Coffee filters were used right against the coconut waste. This seems to hold water pretty well. Weeds and moss that covered the pots in winter, are used with the kitchen scraps.

In order to enrich my potting mix, I dump many old pots into a big container and mix it with 20% coffee grounds.

Kitchen trash, made of coffee grounds, orange and banana peels and egg shells, is placed in the bottom of each pot.  We do no separate composting.
20150323_090427.jpg 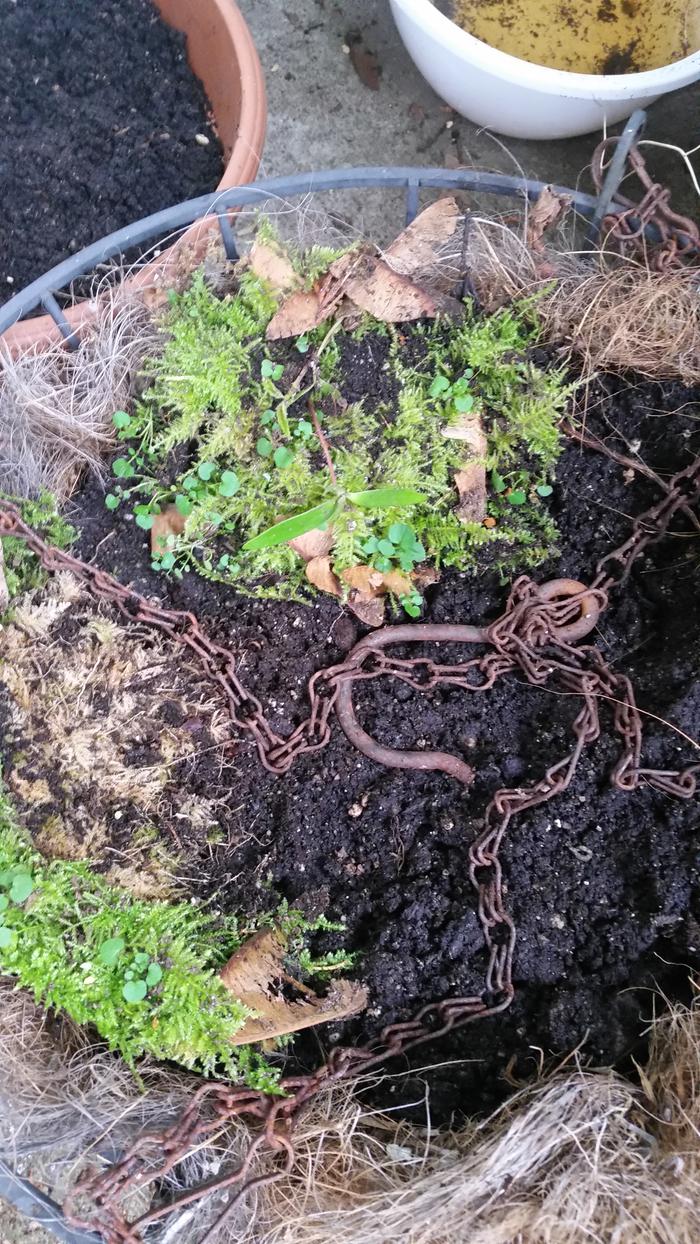 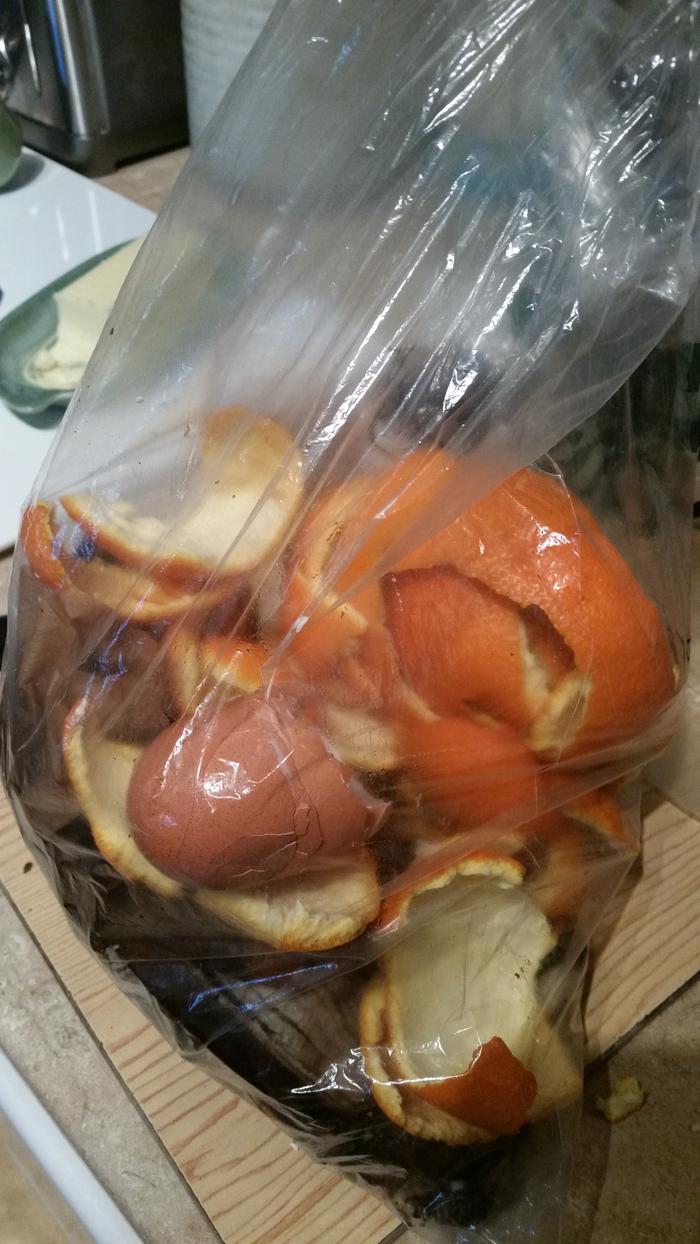 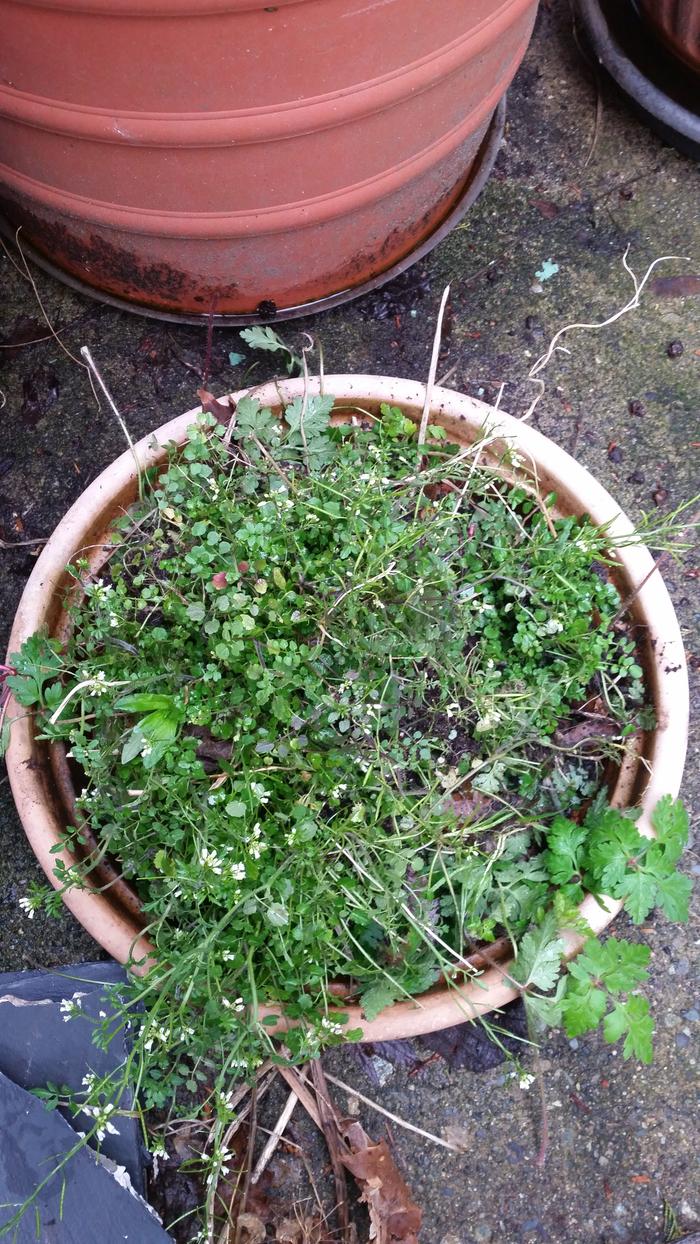 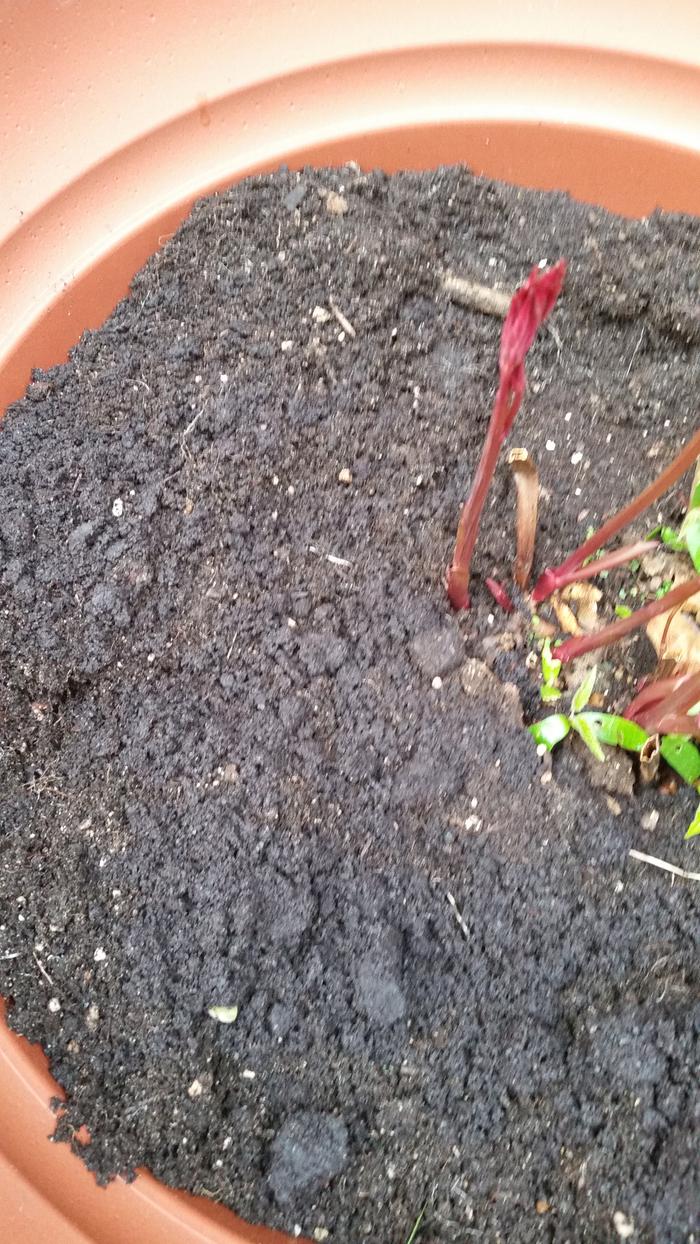