Earthship as a malleable design concept

My name is Duuvy. I studied with Michael Reynolds in Taos, New Mexico in 2011 (i think it was). While there, i was opened up to an amazing world of potential when taught all about the Earthship concept. We got hands on building experience, theory classes, late night discussions and a foundation for our creative evolution.

Upon returning to Australia i was greeted with a mixture of people who loved the concept and a bunch of people who couldnt see beyond the materials used to benefit in what i believe to be one hell of an awesome design concept. So my mission became one of taking this awesome concept and making it malleable.

firstly, here is a crash course in what the concept is in one paragraph or less:

the earthship concept is made up of six integrated living systems, which are:

now what separates this from other natural design concepts is the fact that all of the systems work in integration. take the water system for example. the water is harvested from the roof and is reused 4 times. the same body of water. it is used to shower and wash, then filter through an interior grey water cell which grows food and cleans the air, then is used to flush the toilet, then is used to grow more plants.

so the integration is where this concept comes alive. very similar to how the different zones in permaculture integrate with each other.

So what i am proposing is that people look at earthships as less of a dogmatic design that is only suited to deserts/made from tyres, etc and more of a malleable design concept that can be adapted to suit different bioregions.

duuvy jester
Posts: 5
Location: nimbin, australia
posted 6 years ago
hi miles! thanks for having me

tell you more? what would you like to know?

we are actually running courses at the moment in land and home design adaptation. that is pretty interesting

p.s loving this forum by the way

posted 6 years ago
Nice summation of the earthship concept. Most of the people I have talked to about the earthships think they are wonderful in the deserts. I keep trying to point out that the concept is workable anywhere on the planet. The fact that they have mostly been built in small earthship communities is confusing I think to most people since they seem to be inside the box thinkers or perhaps non thinkers. I believe you could build the concept into just about any type of structure you want to.

Amos Burkey
Posts: 101
Location: Nebraska
3
posted 6 years ago
Hello and welcome, Duuvy. Are you living in an earthship now? If so, how is that working for you? If not, could you describe your design? What challenges do you face executing the design in your location?

Personally, I think the name 'earthship' may be the biggest hurdle for widespread consideration of the design.

i agree. saying earthships only work in the desert is like saying that permaculture only works in Tasmania. Thinking outside the box is essential i reckon. its about looking at the challenges that your bioregion presents and working how how to engage and work with those qualities. We are doing one at the moment which has a superadobe base, strawbale walls and green roof! it still has the interior botanical cells, it still heats and cools itself, it still harvests and reuses water four times (from garage roof), it still treats its own sewerage and grows food internally. the only thing that is different are the materials but its function, operation and core foundation is the same

Currently im not living in an earthship however i have lived in 3 in New Mexico and built 5 across the world, most of which being in Australia. we built the first complete one in australia actually!

i agree that calling them earthships are the biggest hurdle because it is a struggle for people to see beyond the dogma which has been created in that name. i would like to focus on helping with breaking the dogma rather than creating a new one. however we do label what we do 'regenerative biotecture' haha.

i found the earthships in new mexico the most comfortable and nurturing home that i have ever lived in easily. surrounding yourself with earth works well for human health. earth being negatively ionised and us being positively ionised, the balance and harmony is hard to avoid.

we are working at the moment on building a natural building/land design school which is entirely built by the students. we have just acquired the land and i am in the middle of writing it all up at the moment. we are in the sub-tropics so we will be focusing on breathability in walls (absorption and releasing of moisture), cross ventilation, insulative qualities, some thermal qualities and a large focus on vegetation in living areas. we are also focussing on keeping living areas small to assist in thermal consistency, less consumption and ease of construction.

Dave Turpin
Posts: 112
Location: Groton, CT
posted 6 years ago
I have always been a proponent of the Earthship concept as more than just the Earthship Biotecture Global Model design and their ilk. I actually just finished my Master's Thesis on the subject and have designed a concept which meets all of the tenants of the Earthship while also being able to be built, to code.

I will spare the gruesome details, but ultimately, and keep in mind that this is only my opinion, that as long as the Earthship tenants are followed (as closely as they ever can be followed), it does not matter how the Earthship is made.

Thus, instead of packed tires, you can use insulated concrete forms. Does just as good of a job, but building code supported.

Instead of off-grid solar systems, you can use the grid, so long as your energy use is offset by sustainable production somewhere on the property.

And, to heck with spending a year of backbreaking work pounding dirt. Feel free to use machinery.

Michael Reynolds came up with the basic idea of these designs in a time when no recycling existed (at least in the US) at all, and it made sense to reuse as much as possible. In my opinion, building a home which will not fall down in fifty years meets the same purpose.
Bryant RedHawk
gardener

posted 6 years ago
Hi Dave, Congrats on your thesis, I like the idea of grid tied solar more than off grid, if you add the batteries you can have your electricity and not have to worry about the grid going down and you don't have to be so careful of your power draw. You still get savings and by going grid tied with backup you don't have to gear up to the max right away. It gives you the ability to add panels as you can afford them.

I'm using most of the tenants of the Earthship concept but the building is Timberframe, we looked into strawbale, cob, and stackwood but in the end, I know Timberframing so I'm going with what I already have the skills to do correctly. I'm adding passive solar features and super insulation, will do water collection/reuse and most of the other concepts of the Earthship pattern. 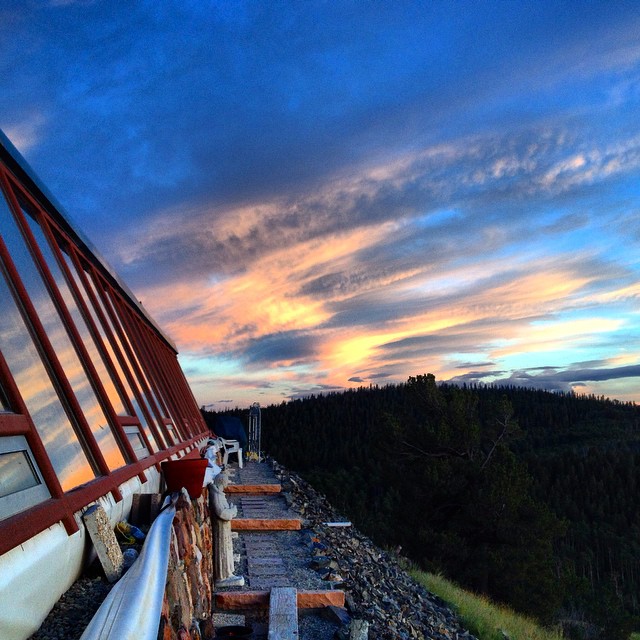 Dave Turpin
Posts: 112
Location: Groton, CT
posted 6 years ago
You're bermed in with crushed stone? Did you crush the stone yourself?

Just wondering. I like the thought of using materials from the site, but in some places (like New England) the soil is usually very thin with large boulders and bedrock not far below.

keith hughes
Posts: 39
Location: futurity, Colorado
1
posted 6 years ago
I be armed the Earthship with rock I dug out by hand with a pick and jackhammer. The rock path I purchase in town for $20 a ton. I used local rock from my adventures in the area. Trees I swiped from my property and national forest. All the brick, block, flagstone got free from job sites and craigslist- freecycle. Insulation, tile, electrical from habitat for humanity. Glass local Denver glass manufacturer. Rest probally from home depot or Lowes.