Kirk Mobert
pollinator
Posts: 172
Location: Point Arena, Ca
43
2
posted 8 years ago
Hello everyone!
This here is an invitation to all of you, join us for an RMH workshop. This workshop will focus on heating water in a safe, zero boom-squish manner.
Heating water with wood is usually a smoky, inefficient and dangerous activity. In this workshop, you will learn how to do this in a safe and clean manner with
recognized Rocket Stove authorities, Kirk Mobert (also known as Donkey) and Leslie Jackson! (co-author of the RMH book)
October 3-5

We hope to see you there!

Douglas Smith
Posts: 12
1
posted 8 years ago
nice design. Would putting heat collection fins on the barrel make heat collection more efficient? What if the air spiraled down along the barrel, increasing the contact time?
Douglas Smith
Posts: 12
1
posted 8 years ago
How do you deal with long term rust? enamel coating? A stainless steel barrel costs about $750

Fins might help. The bell design increases air contact time more than just about anything else can. Look up the principles of "Free Gas Movement" and Bell Stoves. Also, in the actual build, I've placed the water tank directly over the top of the heat riser. A direct strike of heat from the bottom is producing a violent mixing action.. Good stuff!


How do you deal with long term rust? enamel coating? A stainless steel barrel costs about $750


I'm using a hot water tank, salvaged from the dump. On the inside, it's got a VERY tough enamel coat. On the outside, I've covered it with stove paint. The tank was totally free to me, so I'll go with it.
For a different build, if I had to buy from scratch (which I almost NEVER do, I love waste-stream free-bees WAY too much), I would consider a stainless tank, or find a good (and appropriate) paint on coating.

posted 8 years ago
Kirk Mobert : Can we hope to see some pictures from your workshop ?! We were all there in spirit ! For the Good of the Craft ! Big AL

Kirk Mobert
pollinator
Posts: 172
Location: Point Arena, Ca
43
2
posted 8 years ago
Ok.. Some images of the build:
There has been a little bit of a redesign as the space that the stove was built in was rather tight. The tank sets directly on top of the heat riser, rather than beside it. The stove is much taller than I had planned, but much narrower and al in all a tighter build. I like that heat coming from the riser strikes the bottom of the tank directly. The intense hit should provide a rather violent mixing action, turning over the water and making it stratify less.

First, some of the parts. This is the stand that will hold up the water tank and allow heat-flow around the bottom of the tank and up to the bell above. 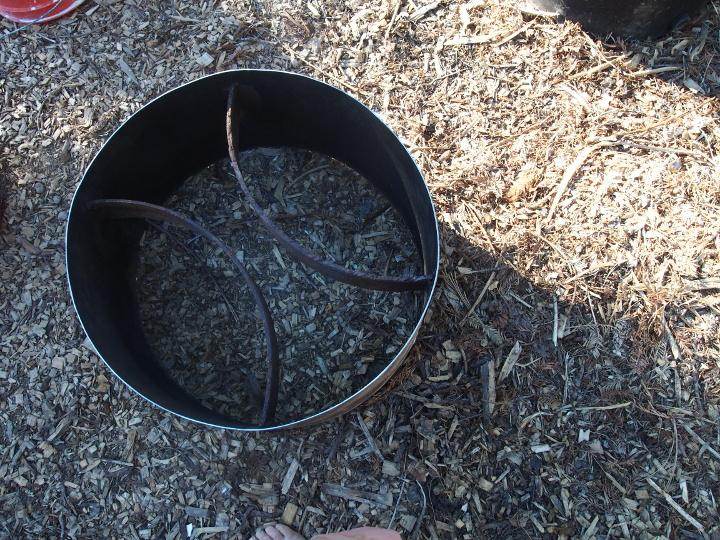 The tank. This is a 24 gallon tank, taken from the old hot water heater (in the same location). We cut the top off and added a sleeve for extra height to allow some free-board in the water level. I wanted to keep the solar pre-heater in the system and the top pipe connector seemed a bit too close to the top, now there's room for expansion and to keep the water level up a bit. 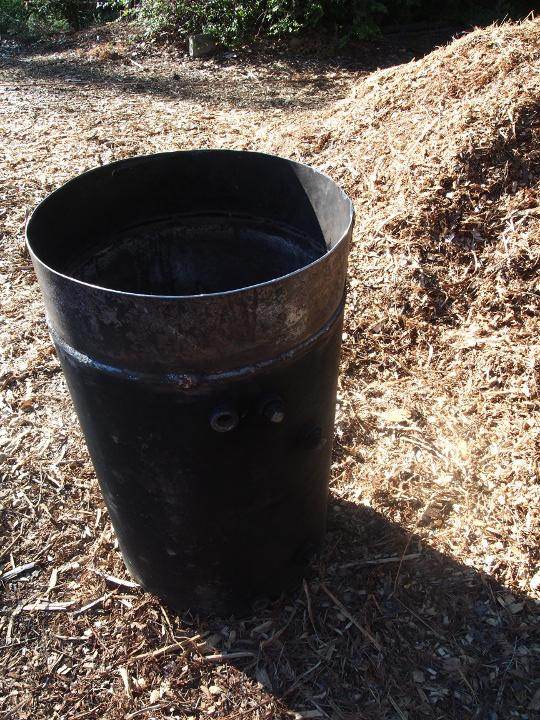 The base going in. It's insulated under with perlite/clay. 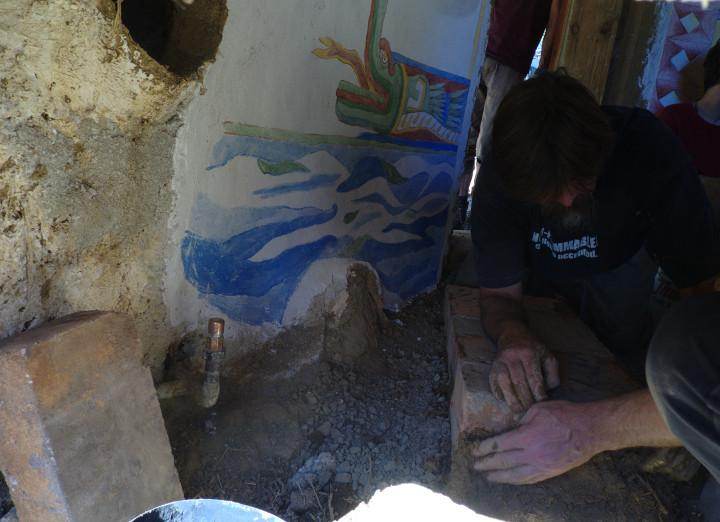 The bottom of the stove, the firebox and burn tunnel are built with firebrick. My neighbour gifted me with some extra large bricks, measuring 12" by 6" by 3", not a lot of them are needed to do the job. The body of the stove was built from adobe brick and cob. In this image, you can see the bottom layout. The heat riser was cast in place using adobes as the outside of the form and sonotube, cardboard concrete forming tube as the inside. We kept the burn tunnel as short as possible, you can see that the center of the heat riser (base) is not in the center of the build. The heat riser is angled to the center at top. 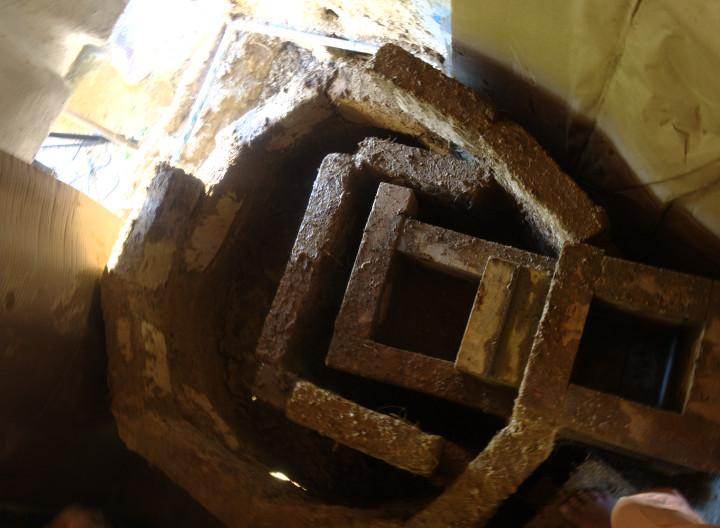 Unfortunately, I don't have any images of the forming/packing of the heat riser. The base was built up with adobes, making an inside adobe form left quite a bit of space around to be filled. We used the dirt/rocks/broken adobes and other debris left over from taking apart the previous stove to fill in extra space in this new build.
Here you can see the rocket stove base, J-tube inside, with the spacer and stove setting on top. 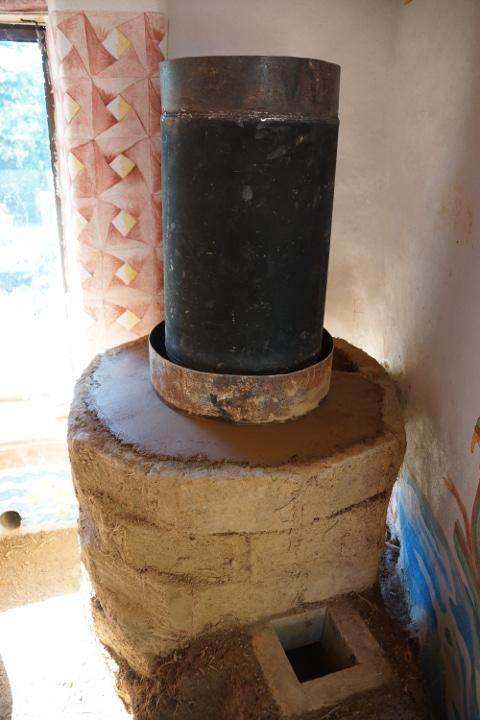 You can see in this image the piping for the solar pre-heater attached to the tank. The exhaust manifold is partially visible at the bottom left of the tank. 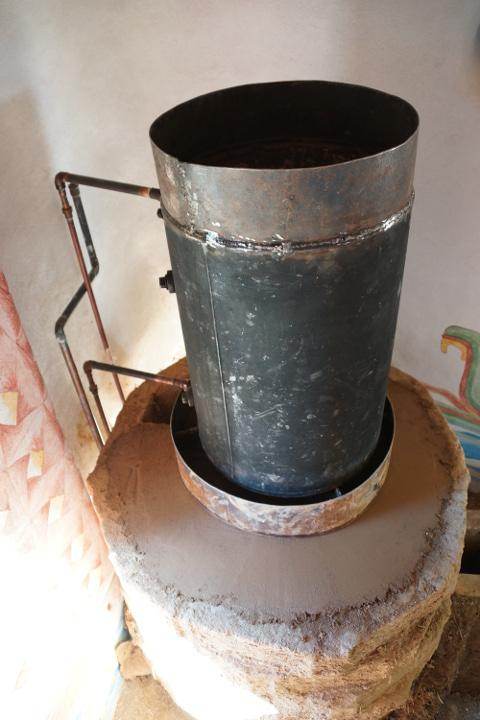 We then built a "bell" around the hot water heater. We built a surround of adobes, leaving a gap of around 8 inches between the adobes and the tank, all the way around. The adobes were plastered with an insulating layer of perlite/clay, added as we went, layer by layer. Here you can see down between the tank and the bell walls to the exhaust below. 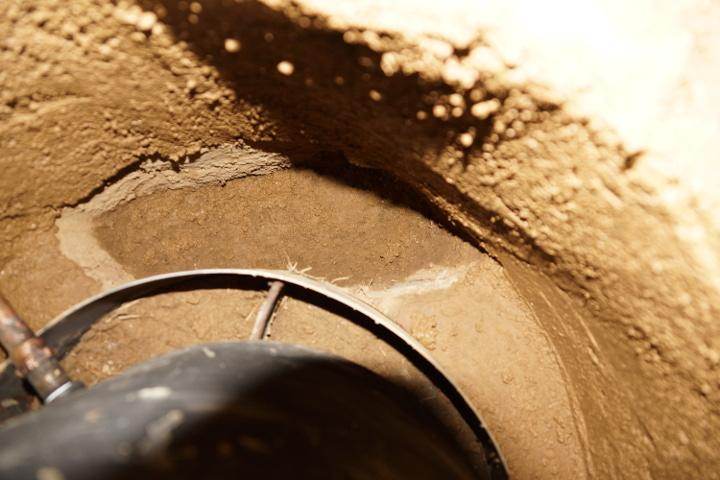 Leslie Jackson, having fun with the process. 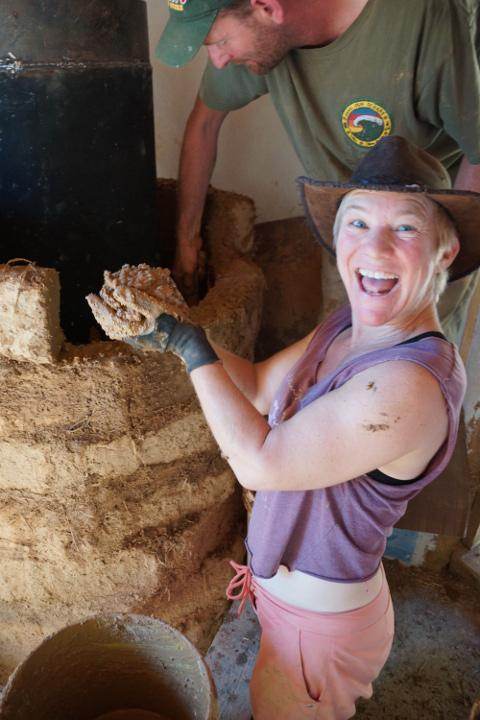 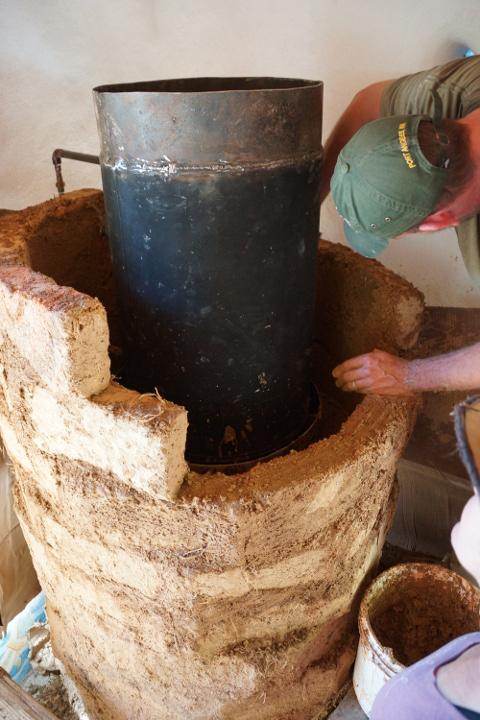 The top layer was made with adobes leaned up the long way, angled into the barrel and cobbed around to seal. Here, James Henderson places the last bricks and closes 'em up. 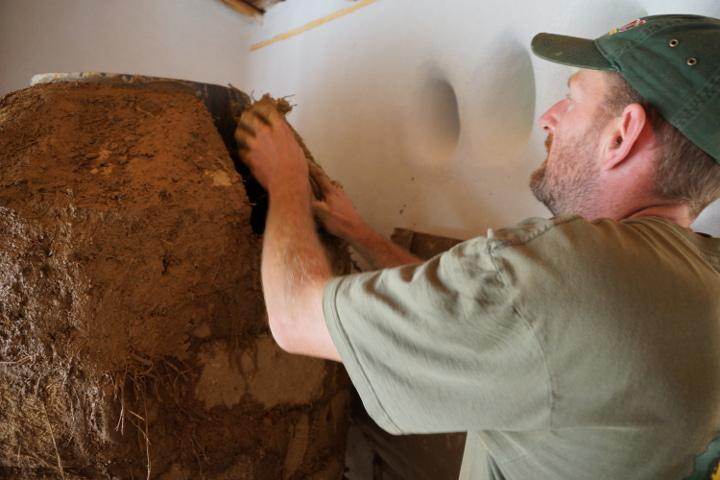 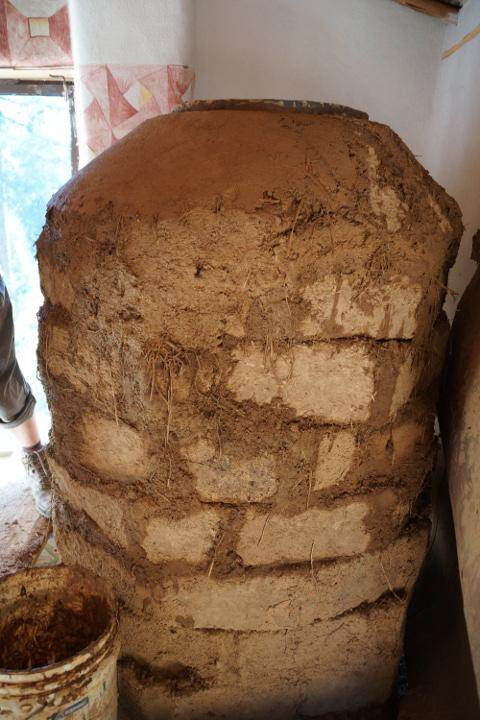 The top acquired a little definition and some sealing with a wet, cob like plaster. Here, Jay Emery applies and smooths. 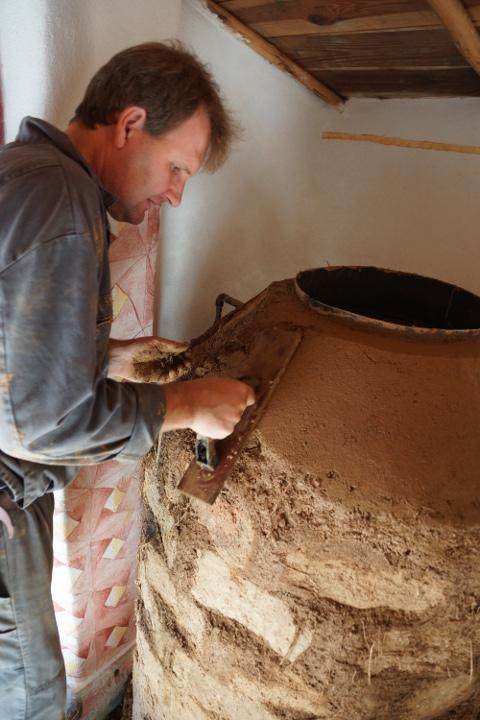 The coil was suspended (by myself and Robin Bonine (pictured)) by hanging it from wires. The coil is not allowed to touch the bottom or sides, in case of a failure that may drain the tank it will never be allowed to come in direct contact with a super-heated barrel side. 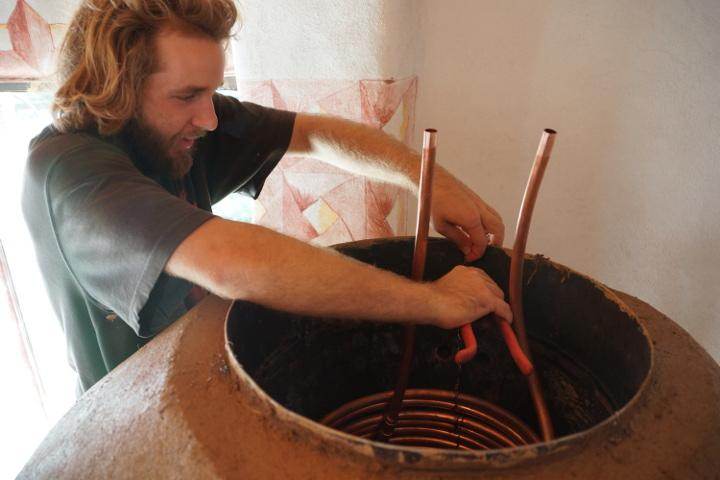 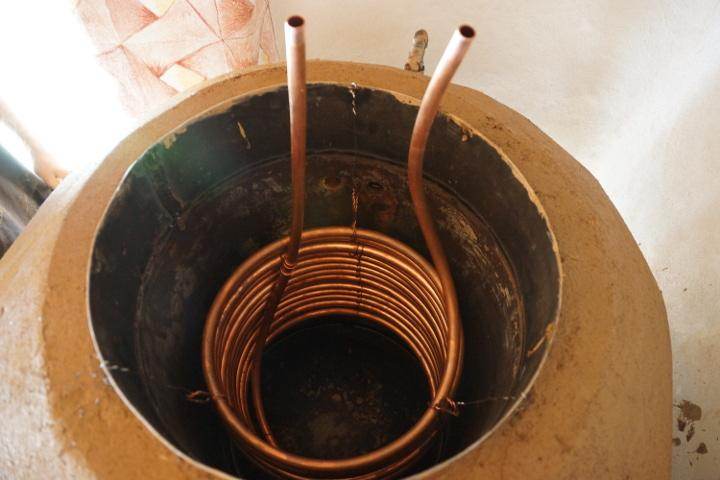 Then, the coil was hooked up to water inlet/outlets, the tank was filled with water and the system tested. 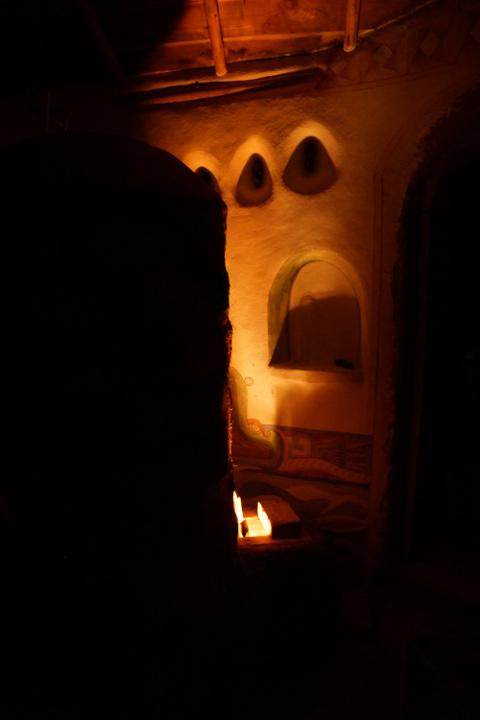 Douglas Smith
Posts: 12
1
posted 8 years ago
@kirk Thank you for the update. That is very inspirational.

o how did you finish the top? did you insulate that also?

o I know you probably need time to actually evaluate the system for summer time use, but can you tell how much extra house heat the system generates , that is, might it overheat the house in summer? How cool does the exterior stay? Could it use more insulation? Maybe you use solar heated water in summer anyway, and see it as a 2ndary RMH

? It looks pretty easy to wrap in fiberglass (or something more natural), if needed.

Douglas Smith wrote:@kirk Thank you for the update. That is very inspirational.

o how did you finish the top? did you insulate that also?

o I know you probably need time to actually evaluate the system for summer time use, but can you tell how much extra house heat the system generates , that is, might it overheat the house in summer? How cool does the exterior stay? Could it use more insulation? Maybe you use solar heated water in summer anyway, and see it as a 2ndary RMH

? It looks pretty easy to wrap in fiberglass (or something more natural), if needed.

Thanks again for sharing.

I will make a wooden lid for the top. It should be a little insulating; on the other hand, it needs to vent freely so it WILL pass heat no matter what is done. It's in a shower house, so it only heats a dedicated building which ALSO has an outdoor shower area. If it does get to hot inside, we can open the doors and shower outside.

The solar loop is intended to heat water for the main part of summer, we won''t need the fire very much. I will need to re-make the solar panel in a different way. I have noticed that the solar loop doesn't work as well as it did before. I expected this and it's fine. Every system has compromises, I can wait on this for a while, summer is a couple/few months off.

The adobe stack is insulated from the inside with perlite/clay. It does heat the room, though (so far) it hasn't been excessive. It could be wrapped in more insulation but I hope to never do that. If I do, I'll make another perlite/clay layer on the outside, then plaster over it. It seems that more heat escapes from the top than the sides at this time.