Gilbert Fritz wrote:No, I meant warming predictions. Some people predicted an ice free arctic by 2013, or a snow free UK by 2000. That does not disproved AGW of course, it just means that there is still some debate as to just how fast things will happen, and even just what will happen. I think anybody can see that there has been a warming trend. But where it goes from here is less certain. Different scientists and models disagree as to just how much warming, when and where.

I think that's the nature of studying such a large and complex system. The consensus is that it is warming and that the warming is caused by human actions.

The good thing about that is that humans are capable of changing their actions, if they choose to.

it's all about "measurement"

posted 6 years ago
The prof seems to be grabbing at the same old objections as the other skeptics:

"I am Norwegian, should I really worry about a little bit of warming?" he said. "I am unfortunately becoming an old man. We have heard many similar warnings about the acid rain 30 years ago and the ozone hole 10 years ago or deforestation but the humanity is still around."

Norway would benefit from warming and humans haven't gone extinct so everything's ok.

posted 6 years ago
"Objection: The surface temperature record is full of assumptions, corrections, differing equipment and station settings, changing technology, varying altitudes, and more. It is not possible to claim we know what the “global average temperature” is, much less determine any trend. The IPCC graphs only say what the scientists want them to say.

Answer: There is actually some truth to the part about the difficulties; scientists have overcome many of them in turning the hundreds of thousands of measurements taken in many different ways and over a span of more than a dozen decades into a single globally averaged trend.

But this is the nature of science — no one said it was easy. It’s taken the scientific community a long time to finally come out and say that what we have been observing for 100 years is in fact exactly what it looks like. All other possible explanations (for example, the Urban Heat Island effect) have been investigated, the data has been examined and re-examined, reviewed and re-reviewed, and the conclusion has become unassailable...."

duane hennon wrote:
we should work to put carbon in the ground where it belongs

Why, if CO2 isn't causing global warming? Why should we bother about carbon at all?

it's about measurement , significant figures, and what you can rightfully claim.


We want to put carbon back into the ground to build soil (humus) to feed the microbes and crawlies
humus also holds water which prevents runoff
soil with humus allow plants to grow
and as the post above describes, hydrated soil and plants
influence the small water cycle
which affects local climate

I'm neither a mathematician nor a climate scientist, so anything discussing numbers is not going to mean much to me, I'm afraid. I really do have to bow to authority on this matter, a matter upon which there is large consensus among scientists.

I certainly agree with you about carbon cycling and local climate. 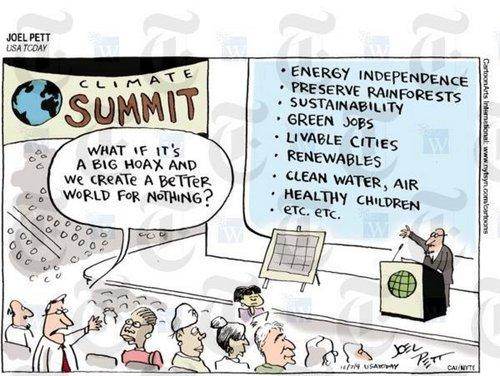 Nick Kitchener wrote:Permies all over the world are designing systems intended to last 1000 years, so what if a fundamental basis for these designs is wrong? There will be very real repercussions within these systems that's what.

I'm TOTALLY not interested in the climate change debate. What I'd like to know are the "real repercussions" of designing resiliency into our systems. How can that be a bad thing?


I'm TOTALLY not interested in the climate change debate. What I'd like to know are the "real repercussions" of designing resiliency into our systems. How can that be a bad thing?

I agree
the CO2/climate change debate is a distraction from what we should be doing
which is building resilient, regenerative systems the best we know how
whether they last for a 1000 yrs (or a 100 or 10) due to climate , design limitations, political upheaval, evolution, or space aliens
is beyond our control