Ben Zumeta wrote:Of course I am not suggesting importing all that mulch, rather we should grow it and glean it from waste streams like the logging industry, as well as from thinning operations to mitigate poor agriforestry practices that led to moncrop dog hair Doug fir stands.

I think this is a common misconception. As one person in my town tried to say, she wanted my sawmills to pay a lot more in taxes because of the "waste" they produced. I fought back with a quick and decisive "what waste", and ultimately won the argument in town and defeated her proposal.

There is no waste.

I have just have rinky-dinky sawmills, but other then a few empty 1 quart containers of oil when I change the oil in the engines, nothing goes to waste. The wood products are obviously used to build, but so are the slabs, or are used for firewood. The Sawdust is used for my sheep, or are sold for bedding, and the bark for mulch...

On bigger commercial sawmills it is even more diversified. A big sawmill near me obviously uses the wood for building products, uses anything small to make kids blocks, the sawdust is burned in their boilers to make steam for their kilns with the extra sawdust being sold to farmers, the bark is mulched up and sold to Jolly Farmer to sell as commercial mulch to Home Depot and such, or is burned in their boilers to make steam for the kilns or their plant heat in the winter...so every drop is used. In fact that is actually my issue with logging today, they take TOO MUCH.

I have no issues with what they do at the sawmill complex, they use 100% of the wood and actually make more money on the byproducts then they do the actual lumber they are making. The problem is, all those tops and limbs used to be left in the woods, about 40% of the tree, but now that is processed in what is called biomass, and burned to make power. This leaves no wood residue on the ground. For the unschooled this looks great, no mess, but it leaves nothing for nutrients for the next generation of trees...

I was talking with a paper company that is sounding out a forester to my farm soon, and he asked me what I was doing with my limbs and tops since I only take the bole (trunk). I said I drive over it and crush it down with my bulldozer or skidder. He started laughing, so I told him, "for the people you deal with most of the time, that slash represents a mess, but as a farmer, that represents lost soil." Here in Maine anyway, anything under 2 inches in diameter, less then 2 feet off the ground, will rot in 2 years time. Landowners today are losing a lot of potential soil because they want the mess cleaned up right now. That mess in 2 years time will be soil they can grow food on.

The forest products industry is going through a lot of changes right now. It will be interesting to see where it ends up. A lot of the sawmills and paper mills I partnered with tried to do the right thing and become sustainable and it kicked us in the teeth. My own farm is certified under the American Tree Farm System and the Sustainable Forestry Council and I am a Certified Logger as well, yet none of it means anything because the consumer buying products from Ebay and Amazon does not care where the cardboard box containing their latest and greatest electronic widget came from, they just wanted it yesterday. The mills that did not bother with the expensive certifications...are still producing paper where as the others are now shut down.

Sadly, my forests are being felled. There is no market and they are losing value. In the perfect world I would keep them, let those majestic hemlocks keep on growing along with our noted Spruce and White Pine, but those forests are netting me $25 to the acre per year at a time when property taxes continue to climb and climb. My taxes right now are at $28 an acre, $3 more per year then what the forest is worth. Yet sheep nets about $1000 and acre and hay alone well over $300 an acre...I have to pay those taxes somehow, but it will not be with forests.

So I chose to farm, but I could go back into the workforce, but calculating the environmental impact of that alone would really open peoples eyes as the hidden costs are staggering. It would be ONE WAY to pay my taxes, but I chose farming instead, and my daughters and wife reap addional benefits of having me home and living a good life.
Marco Banks
gardener

posted 5 years ago
Here is a link to a fantastic guide to re-introducing beavers.

Its LOOOOOONG, and full of a ton of technical data.  But its really well-written and it speaks to many of the concerns raised earlier in the thread.

As a keystone species, beavers might be the most important environmental restoration engineers on the planet, and that includes humans.

Erica Wisner wrote:I don't think I've seen beaver-felled trees much over 1 foot diameter.  Usually, they're more in the 1" to 5" diameter range.  To make use of them for dams, the beaver generally has to be able to drag them.  Most of the trees they chew are small branches for food.  They can clear out brush quite a lot, tho.

I know this is an ancient comment in an ancient thread, but what the hey, beavers are amazing animals.  Sometimes they do crazy things for no obvious reason.  In the floodplain of the middle Yukon river and the lower reaches of its tributaries, where there are a lot of towering cottonwoods (very soft wood, quick growing) I have indeed seen beaver-cut trees in the 18-20" size.  Sometimes just felled and left (maybe to get at the upper branches?) but on a few occasions I have seen multiple cuts along the felled tree, creating heavy rounds and short logs, which are still laying more or less in the line where the tree fell.  This has always been in places where the beaver activity is prodigious -- large dam complexes, long dug canals, huge amounts of browse cut and stored underwater -- but not to the extent where, at least to the human eye, beaver browse was depleted.  There always seemed to be lots more willow, alder, aspen, and smaller cottonwoods in the vicinity of these huge-cut trees.  It's not behavior I can explain, but I've seen it.  My best guess is that beavers are bad at guessing/knowing what size log they can move into their canals to float to the dam.  Perhaps they operate on simple instinct; cut the tree, try to nudge it to the canal, if it don't move, cut some off the base and try again, iterate until you get something that moves.  When you have enough beavers and everybody has food and everybody is happy, who cares if that fool Joe spent half the summer getting to the small-enough top of that monster cottonwood before he put the first stick on the dam?  Evolution will eventually put pressure on developing smarter beavers when the situation is more marginal and the need for more efficient dam construction is pressing, but the Yukon river valley is not that situation...

posted 3 years ago
"I have indeed seen beaver-cut trees in the 18-20" size.  Sometimes just felled and left (maybe to get at the upper branches?) but on a few occasions I have seen multiple cuts along the felled tree, creating heavy rounds and short logs, which are still laying more or less in the line where the tree fell.  "

I too have seen this with large cottonwoods and have a couple of ideas...I agree with the tops and branches being food, but suspect that as a building material this softwood is not ideal. Could they be clearing so that alders or other types would grow? Could they be waiting for water to rise and float them during high water season? Could cottonwoods be viewed as a "fall threat"? Could such large trees provide perches for predators like birds of prey? Or is it simply that Johnny beaver is a bit slow and the family just let him (or her) have a 'project tree' to keep busy and out of the way?

It would be very interesting to figure this out - generally there is a logical reason for animal behavior.

posted 2 years ago
Just wanted to add some picrues I took off my dock last Autumn. 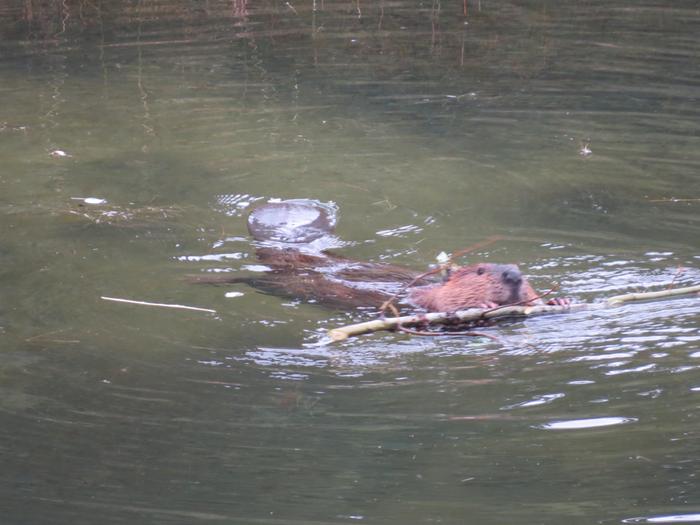 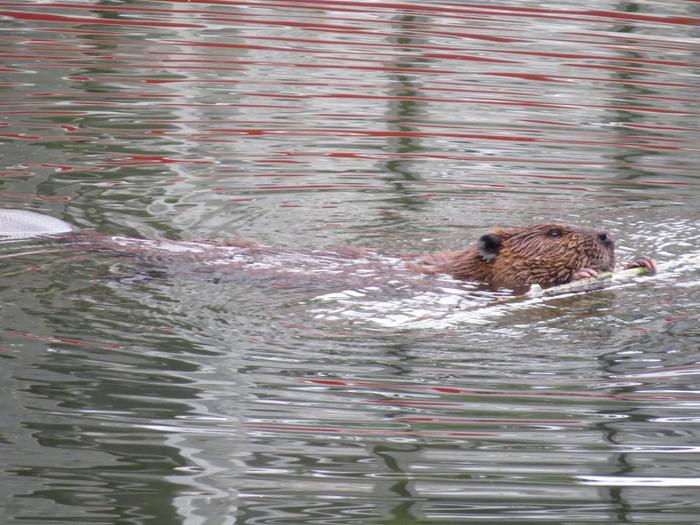 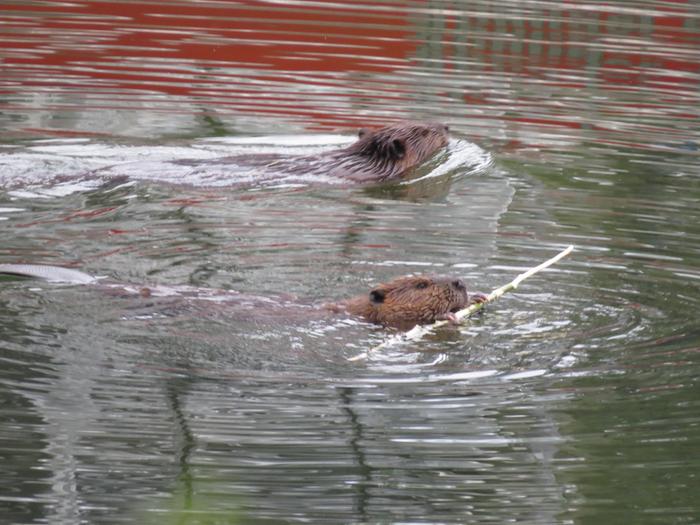 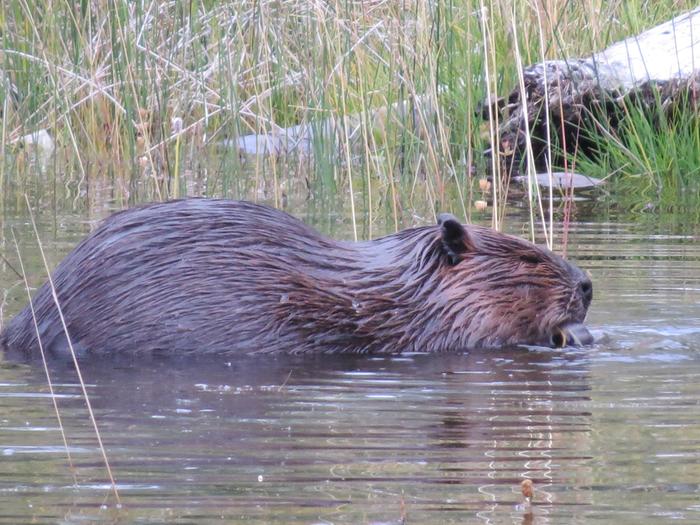 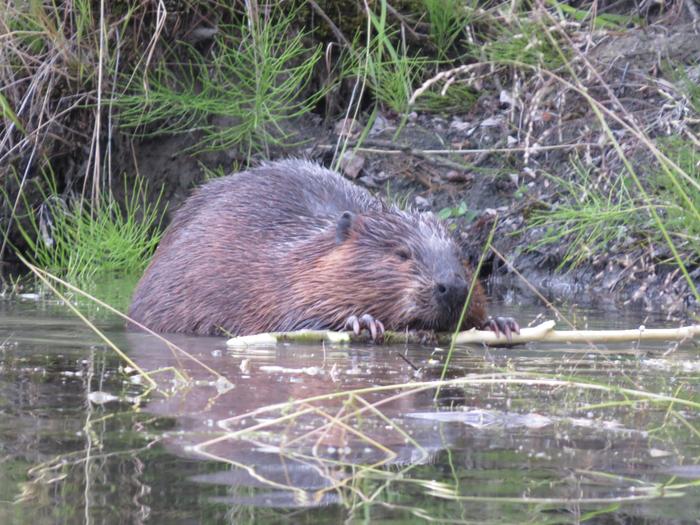 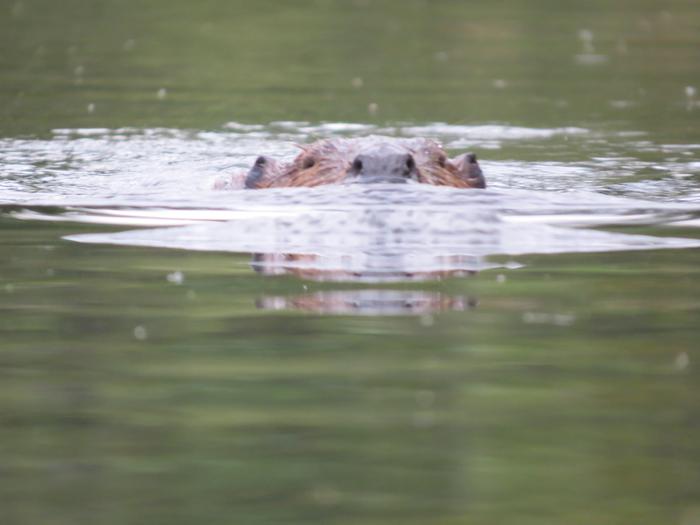