round timber, and straps.

posted 5 years ago
Is there anyone out there, who knows the limitations on round wood building, without the use of expensive, custom made and ugly plates and straps. Are complex joint systems enough for inspectors to bypass these so called necessities? I realize the concern is based on mason to wood, and wall to roof mechanical attachments. Are gravity 'defing' joints ennough to surpass and act to/as/for these restrictions to apply? I'm in the USA. So these rules apply under the international codes. No site specific replies needed. I understand my county is different than yours, I need a generalization, and experience.

Terry Ruth
Posts: 698
26
posted 5 years ago
Chad, IRC 2012 for example states that is for "light framed Buildings" to revert to WFCM for alternative Heavy Timber Frames or WCD 5 it shows some strapping for sawn lumber but no span tables, round, etc? You see requirements for "end joints" or finger glued with HRA that can only be vertical (no bending) or how they can compare to sawn lumber strength of the same grade. That's all I can find. Hiring an Engineer is acceptable, but I'm wondering if there is a code path for say post and beam with traditional joinery like wood pins, etc? Looks the grade ID has to be on every timber from an "approved agency" and a fire rating (1-2 hour) depend on exterior if it is 5 feet away from another wall.

What document are you referring to? 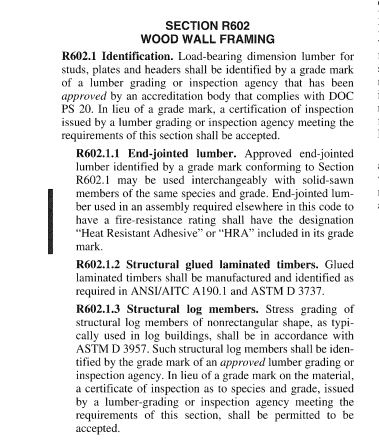 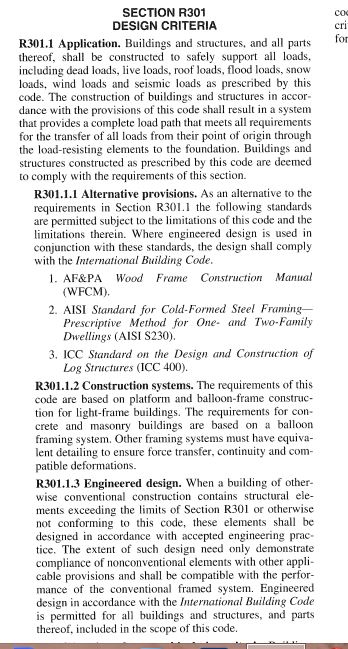 posted 5 years ago
Great resources, and understanding of my question terry. Your dedication, and knowledge is outstanding and as always, much appreciated. My question was mostly if i could get away with round timber framing. I really enjoy the aesthetics of hand built homes. There's something about big ugly straps and plates that I don't want visable. Also, the more I have to buy and fabricate, the higher the cost, and further from nature. I'm willing to fake out some bolts and plug the ends with wood. Form has value over function some times, and i like those clean lines. To go into detail, I want to first build a pavilion over a frost proofed slab, and turn it into a non load bearing walled home. Maybe once the pavilion is okayed legally, and literally on the radar, they won't notice or care when I close it in. (They can't see walls from a satellite) jay, my cpu is telling me you commented on this post, but it's not showing me your post? I'm interested in what you may have said. My next step is to see how my local Amish get away with timber structures, and if they could help me. Ps, an added bonus, pa recently gave inspectors the go ahead to inspect harvested wood. This could be a double edged sword, but as long as I'm on top of the game, I see it as a favor.
Jay C. White Cloud
Posts: 2413
46
posted 5 years ago
Hi Chad,

Sorry my other post failed, that seems to happen to me these days...

I could ramble on for sometime about this subject, but a good deal of it would be repeated from other post I have written and/or info out there already (though not often easy to find and get to.)

As short answers go, square or round...timber framing is any wood to wood joinery...and...it works just as well today as it did thousands of years ago. If a PE spec's some hidden strapps on rare occasion I can live with it if I have to. In most cases (~95%) that is not necessary. We use traditional joinery all the time and often on vintage architecture that we have restored, such as this giant double canted queen/prince post barn I am currently working on which is 50' x 75' in size and over 250 years old.

A PE on your side can really smooth a lot of "bumps" in the road with building officials, so get one if you can afford it. So can working in concert with established Timberwright, even if they do nothing but add there "two cents" and the officials know that. I like your idea of pavillion, but would suggest something besides a concrete slab for both environmental, as well as structural, aesthetic, and monetary reasons. Hope this reply helps.

j
Terry Ruth
Posts: 698
26
posted 5 years ago
Guys, I talked to Engineers both at American Wood Council (AWC) and National Frame Building Association (NFBA). I myself am looking for a lower cost path to build with timbers, post and beam. AWC only has WCD 4 & 5 shown on their site and it is free. No span table, on center spacing, limited metal joinery, etc.....NFBA, AWC pointed me to, does not offer it either. Nothing there worth using. To code comply we have to hire a Structures Engineer (PE) licensed in the job site state.

Baffles me how there is so much out there for light framing in IRC/IBC (replaced UBC). I believe back in day when Unified Building Codes were available there was more. If you look at the same paragraphs I noted above between IRC 2006 - 2012 Heavy Timber framing goes away and points to AWC which again has little except for Engineers per AWC National Design Standards. The NFBA Engineer I spoke with explained the evolution to me a little and the lack of standards he said has to do with artificial growth of trees over recent years that are being farmed and hybrids of unnatural species that are changing the "allowables" or mechanical properties (shear, axial loading, bending, deflection, etc) making it more difficult to standardize into code "especially" he said for non-metal joinery where high load transfer occurs.

Anyway, he said it you look at the growth ring of an artificial tree you usually see in "rows" of trees on farms rather than radom in nature, it has grown making it weaker in some cases. And I thought it had to with preferred stud manufacutruing and politics as is usually the case with alot of code. Sounds like it is tree boot-leggers keeping us from having a code prescriptive less cost no engineer path and not having to hire an Engineer according to one at NFBA. Ironic, since there is more history as Jay said with Timbers, Round wood, etc. Interesting though, since the gal Engineer at AWC said she thought it had to do with lack of seismic and wind or lateral load tables. Heck, those tables don't change just because Timbers are used that is not it I said. NFBA made more sense, properties vary too much with breeding trees outside of nature. They are doing that with food too. We may as well go with engineers glue lams, lots of guides for them - yuck!

They have a "find a Designer" search to the left

BTW: Once there is an Engineered Drawing anyone qualified can inspect it. Some jurisdiction hire private third party inspectors that do not work for the city, etc. Often if an inspector is not familiar with it the PE or another qualified party the PE approves of can inspect it. Our framing inspectors here would probably shy away.