posted 4 years ago
Bear with me on this, I'm still pretty new to general gardening practices and just kind of jumped right into permaculture when I started learning, some I'm a little foggy on some fundamentals. But my questions is this:

My husband and I have successfully start off 3 different varieties of squash seedlings. We have red kuris in our greenhouse right now that we'll be transplanting outside to a hugel bed after most of the frost danger is gone (we live in Central Montana, so that's basically never, but we're shooting for mid-June), Zapallo squash that we'll be keeping in the greenhouse, and butternuts that we'll have planted outside the greenhouse in a little hugel bed. My concern is that these are sprawling plants that produce very heavy fruit, and that the ones in 10" wide clay pots in the greenhouse are going to spill over the edges of their pots, and wind up snapping a lot of vines because of the weight of the squash.

Our plant table is just an old door on top of some cinder blocks - not nearly strong enough to support the weight of a full raised bed in there, but at some point next year when we have more time, we're going to convert the whole operation into actual beds (there is no floor) and a composting operation. Until that time, it seems that we may just be stuck with containers in there.

My husband seems to think we can just keep supporting the growing weight of the vines with strings and wires where necessary, but I feel like this is going to get all over the place fast, and you'll still have the problem of strained vines. What do you guys think? Is there a better way?

Promoting Your Stuff on Permies
Creating a Book or Product Thread
Paid Advertising on Permies.com

posted 4 years ago
I'm afraid this doesn't really answer your question, but I want to a share a little story with you.

I once found myself as a single mom, unable to drive, and with a surplus little red pick-up that I needed to sell. My boss sent one of his drivers around to collect it. I'd been working on my teeny tiny little garden and had made a border of interesting plants, sown wildflower lawn mix, and had a few grow-bags with pumpkins in, grown from seed from a home-grown pumpkin that a friend had given me. When the driver arrived I offered him a cup of tea and he sat on my doorstep looking out over my tiny postage-stamp of a garden and proceeded to tell me all the names, and uses, of the seedlings that were starting to emerge on my 'lawn'. Then he noticed the strip of 'weeds' growing along the back border and told me they were sow-thistle which must have collected along that strip as they seeds were wind-blown and they must have blown to the edge of the garden from the patch of sow thistle growing over by the river, but not to pull them out as they were perfectly edible.

And then he looked towards my grow bags and said "Why are you trying to grow pumpkins in there! They need much more room than that. I'll clear a patch in the field at work and you and the toddler can grow them there." I've no idea if they really would have produced anything growing in a grow bag, but they certainly did well growing a bigger space, and we had a good crop off them, and that driver and I have been together for about 17 years now, and we have a rather nice chunk or two of land. And we still grow a lot of pumpkins.

Destiny, I have grown pumpkins in containers once, trellised up a fence. They were able to grow up the trellis just fine, after I initially tied up the vines while they were small. After that, they could cling and grow through themselves. As far as yield, I grew two vines, and each vine grew one small-ish pumpkin.

The biggest challenge was keeping the containers watered. I was watering them two or three times a day, and they were still not getting enough water. I then tried a "ghetto" drip irrigation system, which was basically a wine bottle full of water, upturned into the pot so that the potting compost went into the neck of the bottle, forming a little cap; this cap of soil acted as a sponge, letting the water from the bottle out slowly so that the plants could take up the water slowly, instead of most of the water just running through the pot. It wasn't until I did this that the vines finally produced female flowers and formed pumpkins.

In the photo, my son is standing in front of one of the pumpkin containers, and you can see the remains of the old vine over his head. 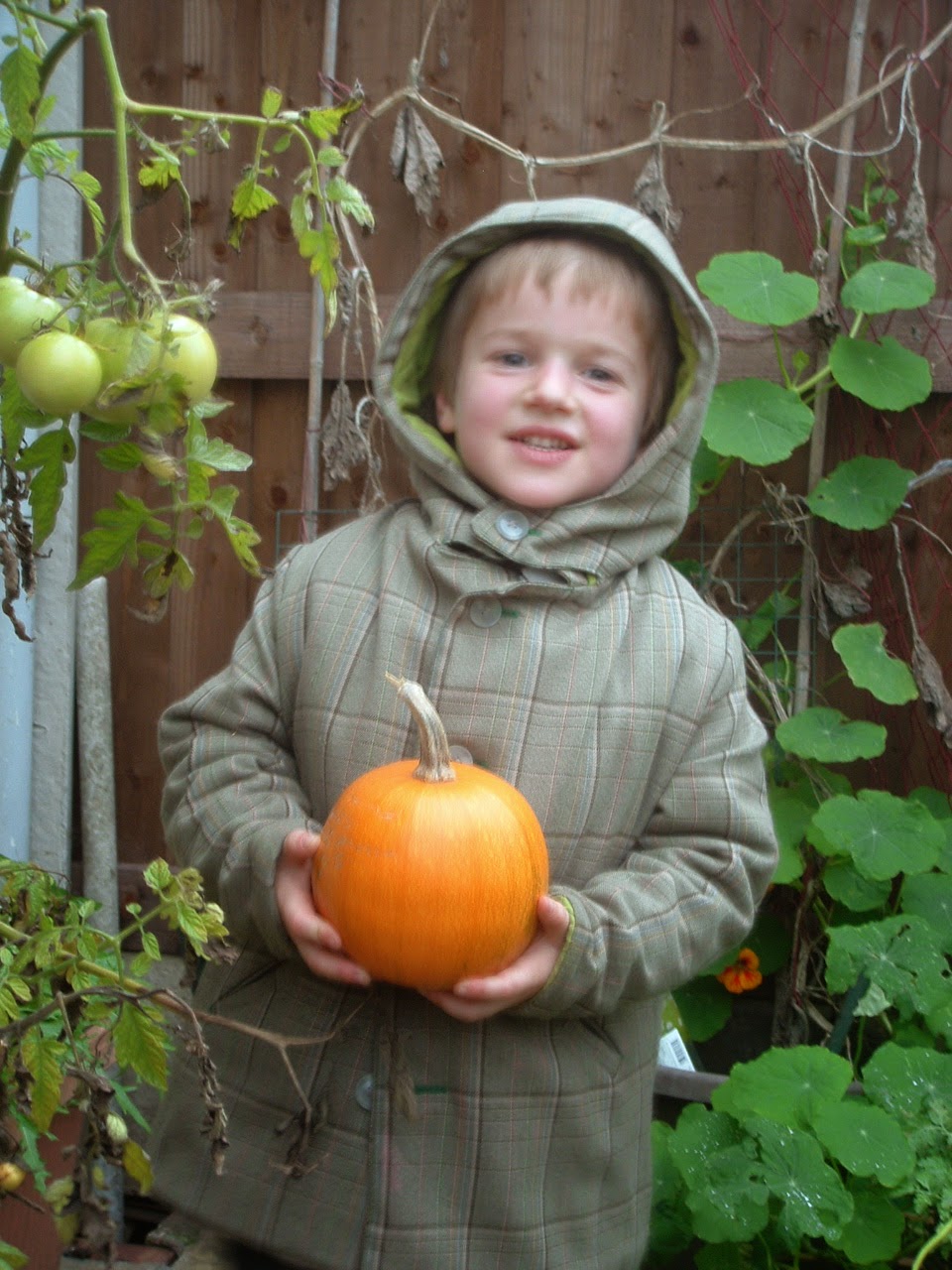 posted 4 years ago
The only squash I have grown in containers are black zucchini, but even there I was using half-barrel-sized plastic tubs. They grew just fine at first -- except for the one where I didn't provide adequate drainage, that one languished -- and produced plenty of zukes in the first flush of production. However I felt they were outgrowing the tubs at about the time the powdery mildew and squash bugs wiped them out.

posted 4 years ago
The size of the Container is realitive. Fertilizers. People grow squash hydroponicly in a no nutrient substrate, with nutrient rich water. So the answer is yes, but the smaller the Container, the more maintenance.