Dale Hodgins
Posts: 9002
Location: Victoria British Columbia-Canada
673
posted 5 years ago
There will be a national IQ test for all Canadians on Canada Day, July 1st.

Rather than a sliding scale, this one will be pass or fail.

Those who have failed the IQ test will have received a sunburn that proves their status.

Get a hat.
bill berry
Posts: 5
posted 5 years ago
do you pass for not getting burnt, or for not using sun screen that has far more damaging effects then a sun burn?
Jeff Hodgins
Posts: 291
13
posted 5 years ago
I thought you were going to say that thouse who were drunk by the afternoon had failed
Dale Hodgins
Posts: 9002
Location: Victoria British Columbia-Canada
673
posted 5 years ago
They've failed themselves and their families already. No point heaping more shame on them.
........
I hope people use one of the completely harmless sunscreens. Hats, umbrellas and trees work well. The goo from the drug store also works well. When I'm 106, if I croak, people can point to the sunscreen as the culprit.

Some people have failed already. I saw a guy this morning, with seriously sunburned shoulders. I have worked outside, all week, without even a hint of sunburn.

posted 4 years ago
I can think of some neighboring countries to yours, that would benefit from this kind of national IQ test where people of color are considered more intelligent by default...

(Umm, just joking, I don't want to start a Cider-Press discussion! Please don't comment on my comment, just mutter "Haha, that's a point, isn't it," and go on writing about ways to avoid sunburn in the genetically melanin-deficient.)

posted 4 years ago
It is currently an article of faith in western culture that exposure to sun is harmful and increases risk of cancer. However, there are some serious and respectable studies that show the opposite, ie avoidance of the sun is actually correlated with a higher risk of death. I know, I know, you don't believe me because you've been following the idea that the sun is bad for you for the past 20 years. But this is some seriously evidence-based stuff. The major study followed 30,000 subjects over 20 years. This is not one of those "20 subjects for 3 years" studies, this is serious.

The Journal of Internal Medicine in March 2016:


Nonsmokers who stayed out of the sun had a life expectancy similar to smokers who soaked up the most rays, according to researchers who studied nearly 30,000 Swedish women over 20 years.

This indicates that avoiding the sun "is a risk factor for death of a similar magnitude as smoking," write the authors of the article, published March 21 in the Journal of Internal Medicine. Compared with those with the highest sun exposure, life expectancy for those who avoided sun dropped by 0.6 to 2.1 years.

Pelle Lindqvist, MD, of Karolinska University Hospital in Huddinge, Sweden, and colleagues found that women who seek out the sun were generally at lower risk for cardiovascular disease (CVD) and noncancer/non-CVD diseases such as diabetes, multiple sclerosis, and pulmonary diseases, than those who avoided sun exposure.

And one of the strengths of the study was that results were dose-specific — sunshine benefits went up with amount of exposure.

The researchers acknowledge that longer life expectancy for sunbathers seems paradoxical to the common thinking that sun exposure increases risk for skin cancer.

"We did find an increased risk of...skin cancer. However, the skin cancers that occurred in those exposing themselves to the sun had better prognosis," Dr Lindqvist said.

Given these findings, he told Medscape Medical News, women should not overexpose themselves to sun, but underexposure may be even more dangerous than people think.

"We know in our population, there are three big lifestyle factors [that endanger health]: smoking, being overweight, and inactivity," he said. "Now we know there is a fourth — avoiding sun exposure."


The National Institutes of Health published this in 2014: Avoidance of sun exposure is a risk factor for all-cause mortality: results from the Melanoma in Southern Sweden cohort.


RESULTS:
There were 2545 deaths amongst the 29,518 women who responded to the initial questionnaire. We found that all-cause mortality was inversely related to sun exposure habits. The mortality rate amongst avoiders of sun exposure was approximately twofold higher compared with the highest sun exposure group, resulting in excess mortality with a population attributable risk of 3%.

Of course the Swedish climate and skin may not be similar to your own, but I must say this study goes against a major article of faith in western culture, so much so that I was shocked to see no discussion of it in the western media that I follow.

Dale Hodgins
Posts: 9002
Location: Victoria British Columbia-Canada
673
posted 4 years ago
Suppose we just go with vanity. I have seen some really, really ugly people whose skin is sagging off their faces. Many of them get too much sun.

I sometimes see women in beach apparel, who have gotten so much sun over time, that the top of their boobs look like alligator skin. I like alligators and I like boobs, but this is not a good look for women.

I have the ability to walk through a crowd and fairly consistently pick out those who smoke and those who enjoy regular sunburns. Both practices make people look older than their years. Of course there are other factors. Of the people I know, those who allow themselves to become sunburned, often do it in conjunction with heavy drinking. A sober person might look and think, "I'm starting to burn. I'm going to get out of the sun now."
Dale Hodgins
Posts: 9002
Location: Victoria British Columbia-Canada
673
posted 3 years ago
This is the 150th anniversary of Confederation. I predict extra heavy drinking, combined with sunburn.

The worst burn I've ever seen, was on a guy who slept on the beach after a night of heavy drinking. He just kept right on sleeping as he started to broil.

Do you think we should count inebriated drownings as a fail on the IQ test?
Tyler Miller
Posts: 115
Location: Trapper Creek, AK (3a)
9
posted 3 years ago
I got a little bit of sunburn on the back of my neck this year. Obviously I failed the test, but I hope I'm still considered functional enough to take care of myself with limited supervision.

I need to get a wider brimmed straw hat, and I need one that has a cord to keep it from blowing off the top of my head. Too bad my noggin is so big that hardly any hats fit me. Somewhat unrelated, I've found that long sleeved light-colored shirts are nice for working in the sun, but they draw bugs like crazy. Dark color don't attract as many insects, but they sure are hotter.
Dale Hodgins
Posts: 9002
Location: Victoria British Columbia-Canada
673
posted 3 years ago
I like to wear thick winter shirts, on really hot days. I dip them in water, so that I am effectively wearing a swamp cooler. On milder days I dip thin summer shirts in water. My hat also gets dipped.

I didn't see nearly as many sunburns this year as in times past. We had relatively cool weather. Public drunkenness during festivities was definitely reduced this year. It fell on a Saturday. Perhaps those who started drinking on Friday night, were not so energetic on Saturday. I attended some of the activities near Victoria's waterfront. 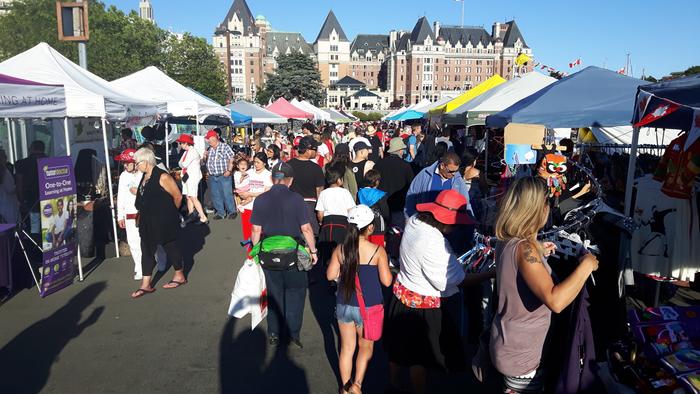 Tyler Miller
Posts: 115
Location: Trapper Creek, AK (3a)
9
posted 3 years ago
Dipping the shirts in water is a good idea. I've tried that before when mountain biking, but I ended up rubbing my nipples raw. Maybe if I just soaked the back? Also, gardening is usually a less vigorous activity.

I often soak a rag and wrap it around my neck. The back of my neck is usually where I get burnt.
Alex Riddles
Posts: 81
Location: Columbia Missouri
11
I like...

posted 3 years ago
I was an anchor baby.  My parents immigrated from Hamilton just before I was born and  I've always thought of Canada as my second country. I couldn't make the trip this year.  But, Canada Day is on my bucket list.