This is the largest brownlands reclamation project ever undertaken in Victoria. 15 years ago, the area was heavily polluted with large amounts of contaminated soil as well as tons of surface debris. When the job first started,  I lead a crew who gathered up all of the old tires,  paint cans and other garbage that had been dumped on the site for years. Several 30 yard garbage bins where filled. Then,  they hauled away thousands of tons of soil which were put through a burn facility to get rid of hydrocarbons.

High end condos replace this garbage dump. All of the water used in this facility,  comes from rainwater captured on site and from their own graywater treatment facility. Each ground-floor unit has a section of the ponds and they have their own raised wooden walkway with a gate. None of the gates were locked in this safe neighborhood. My photos are taken from the public walkway.  Creation of public green space was part of the city's deal with the developers.

A blight on the landscape,  has been transformed into one of the nicest housing developments near the waterfront.
20150821_170854.jpg 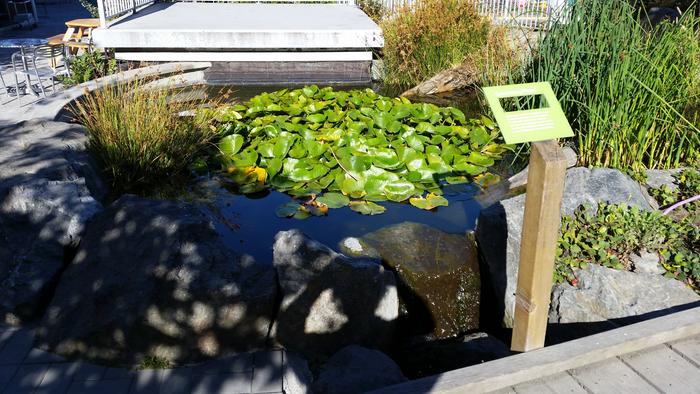 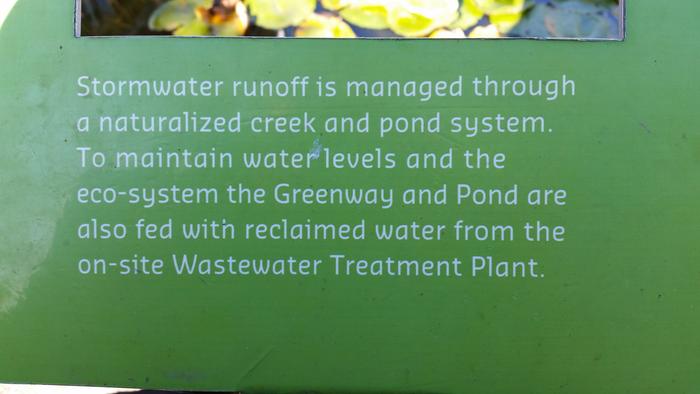 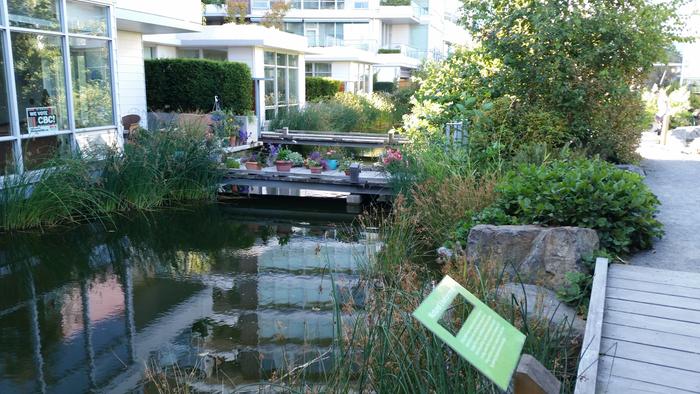 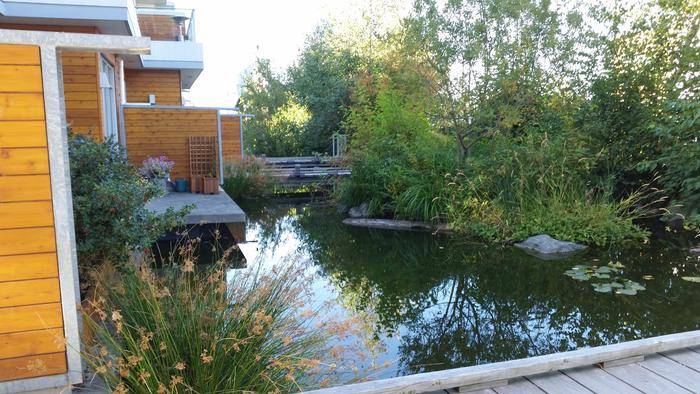 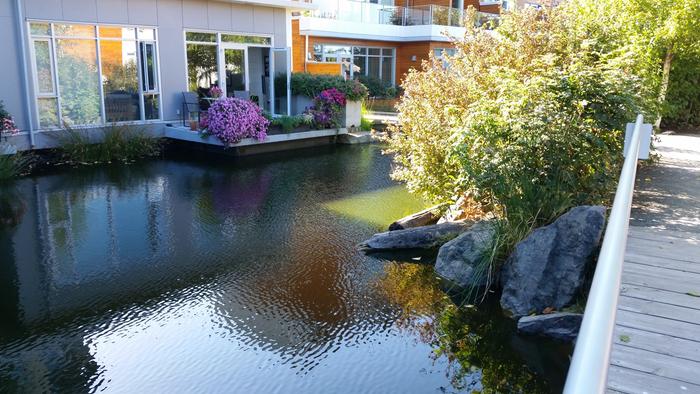 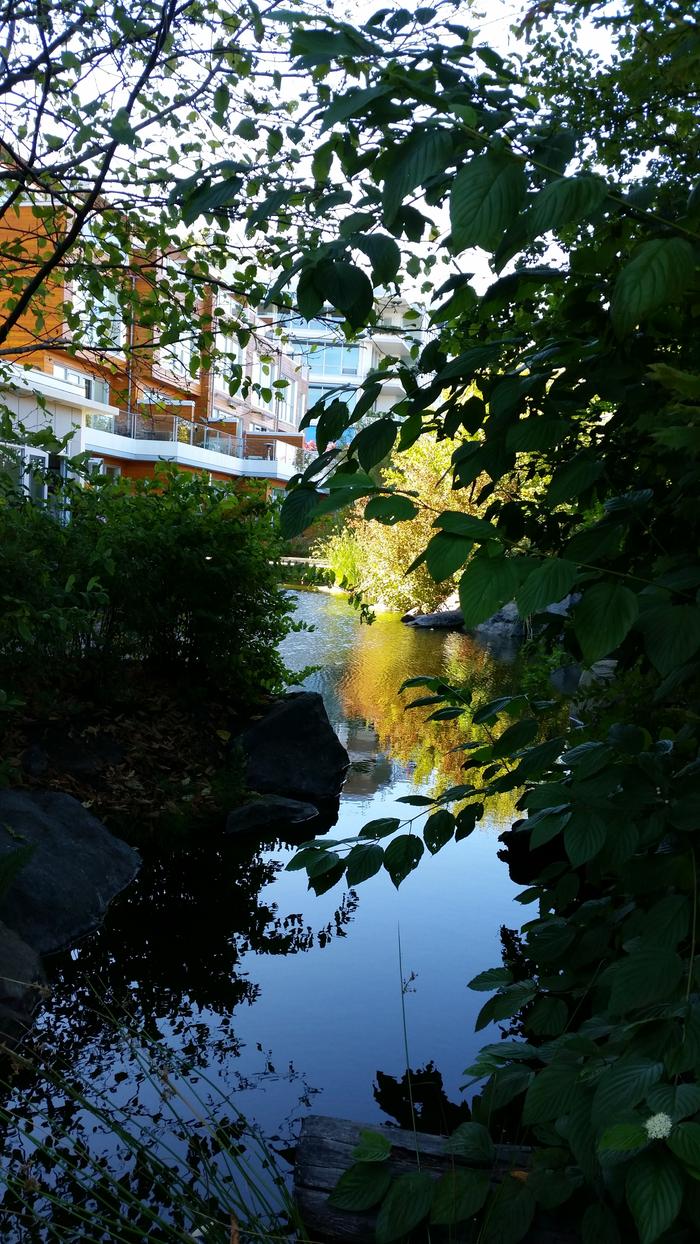 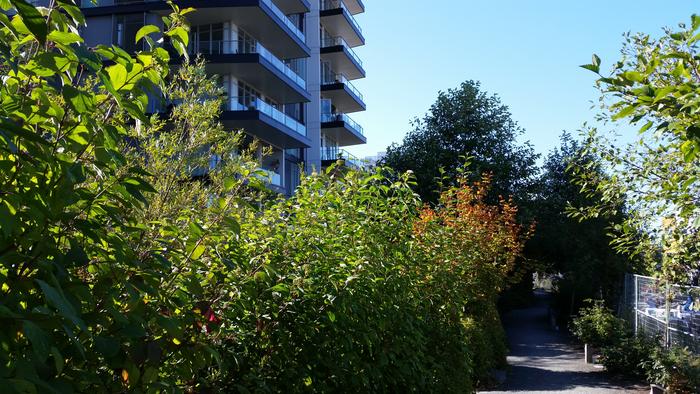 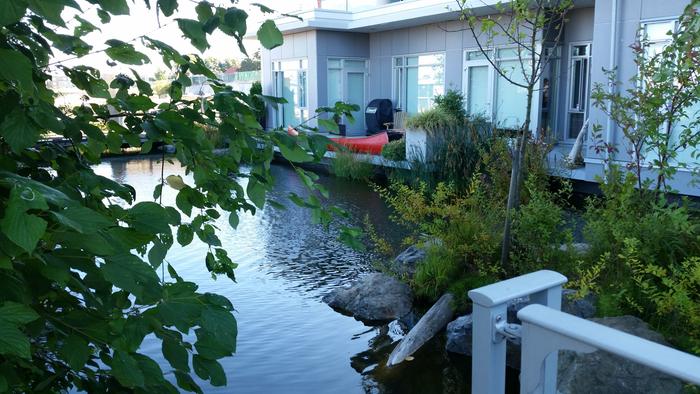 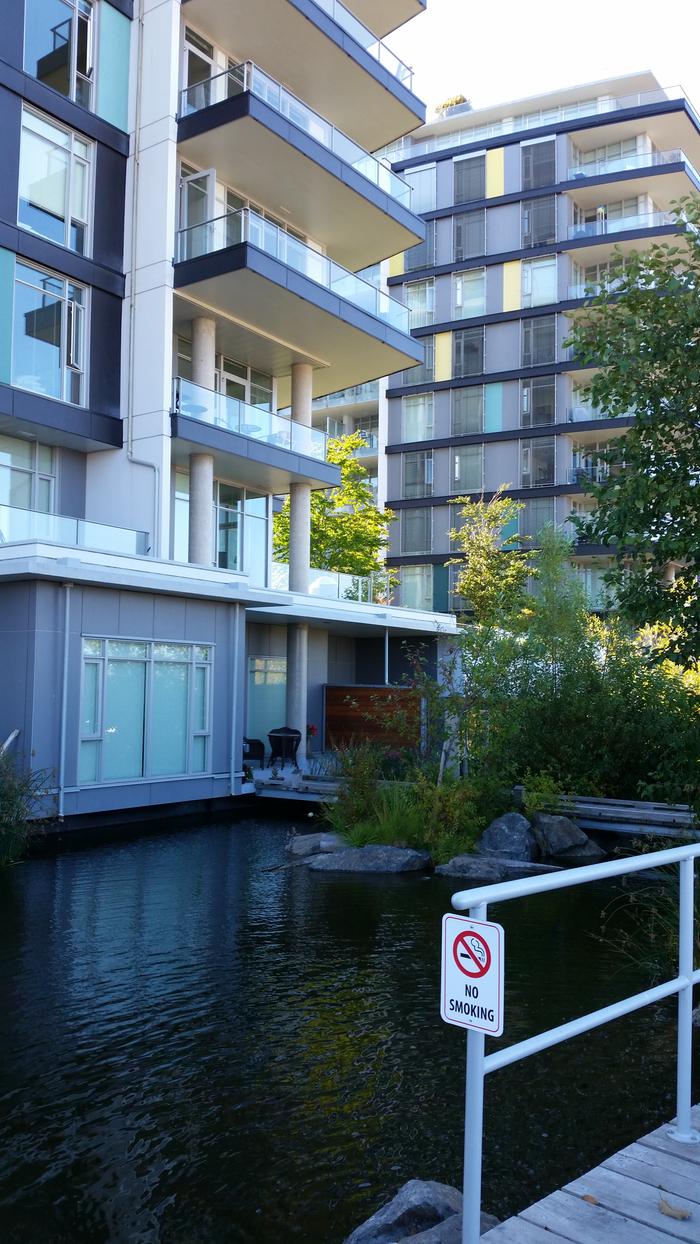 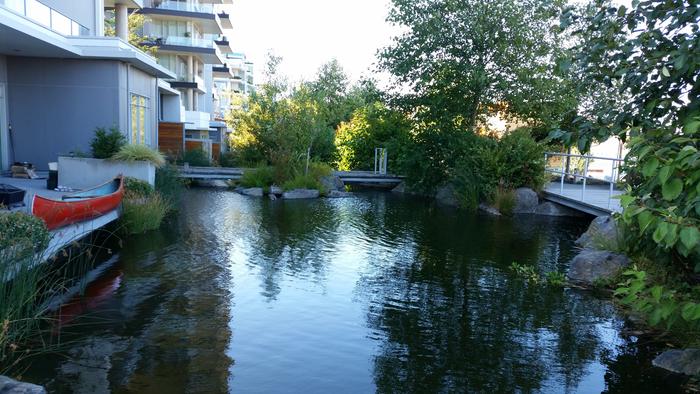 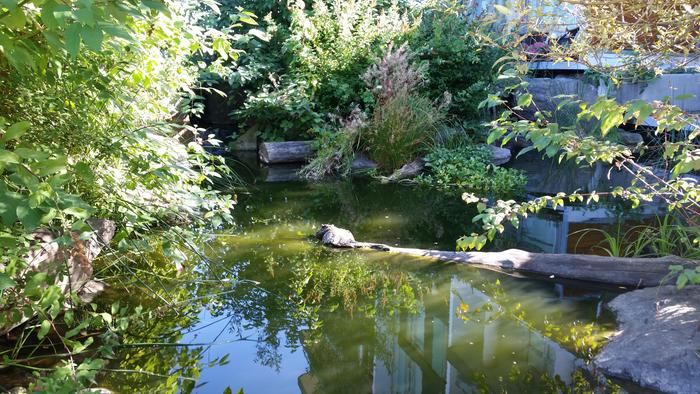 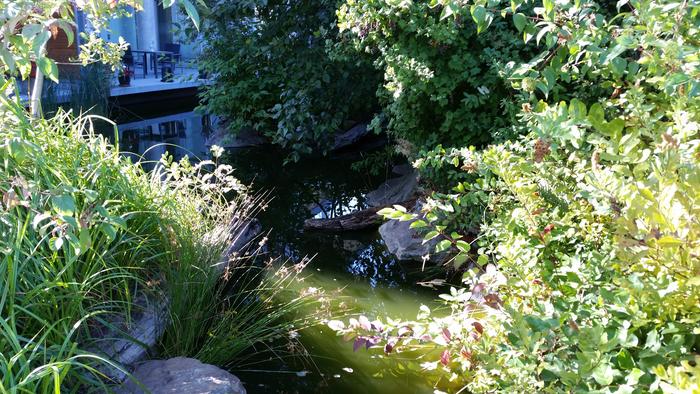 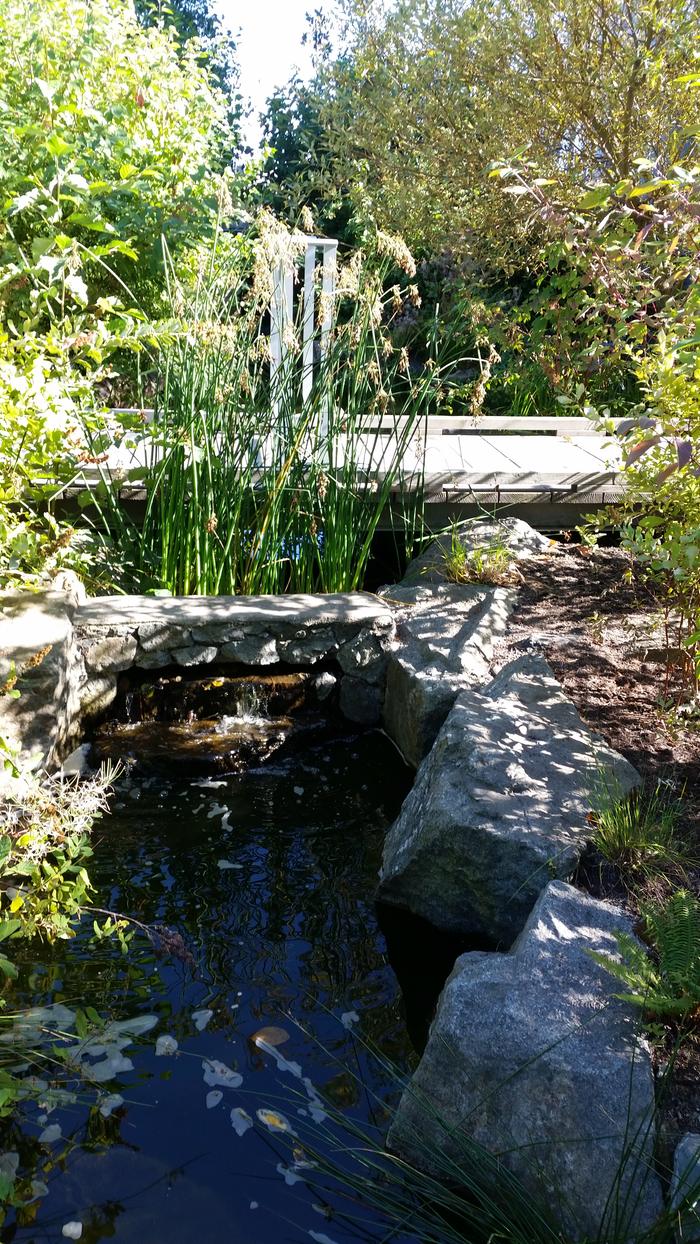 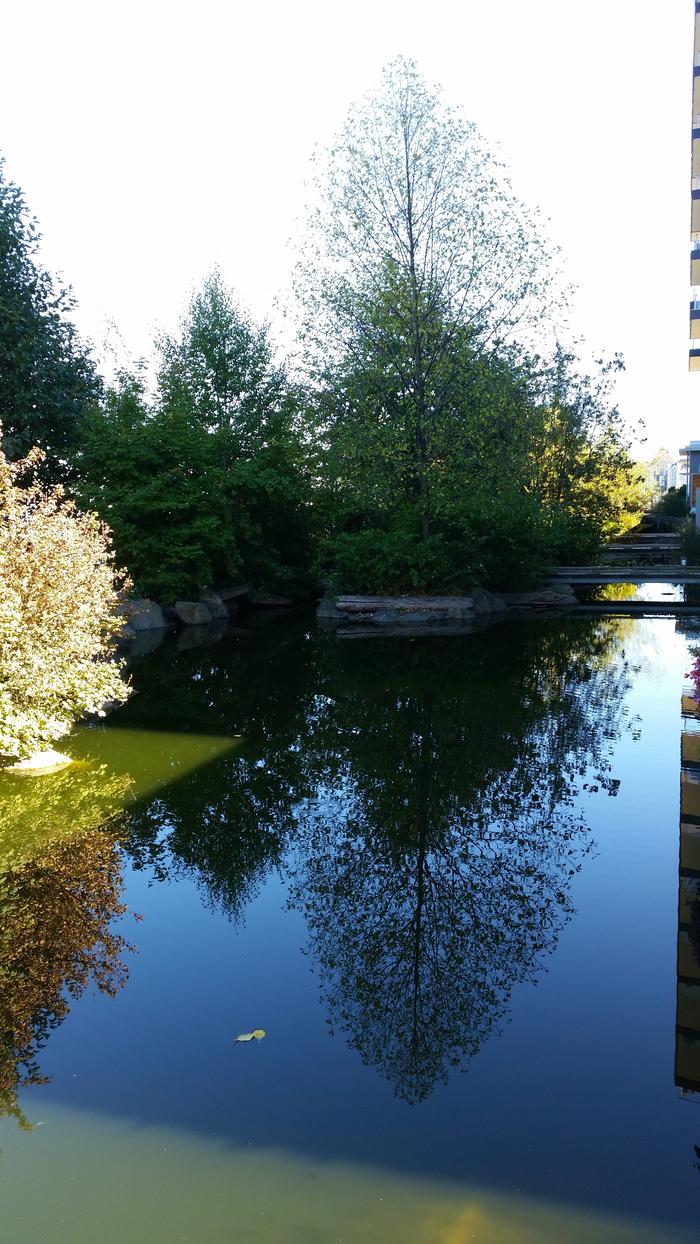 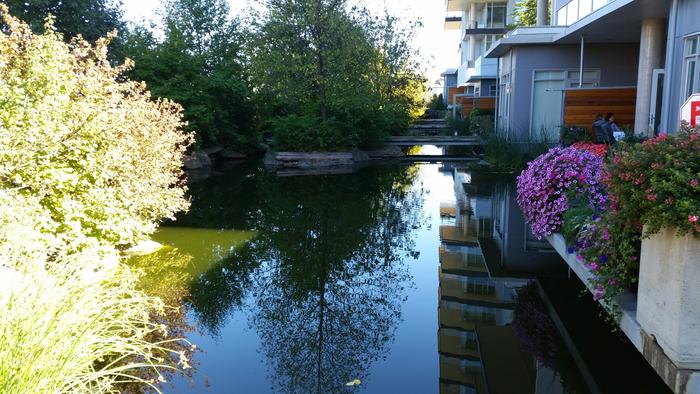 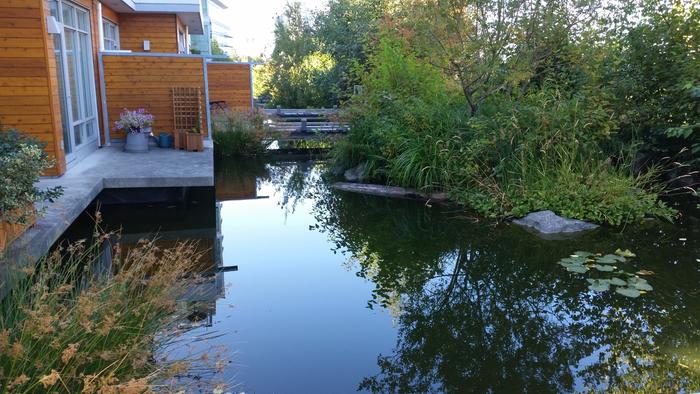 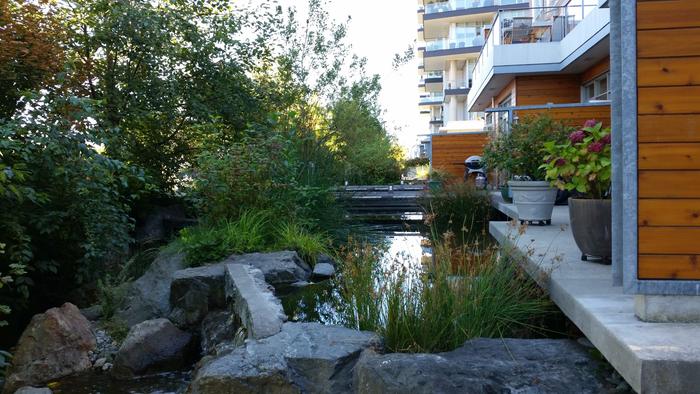 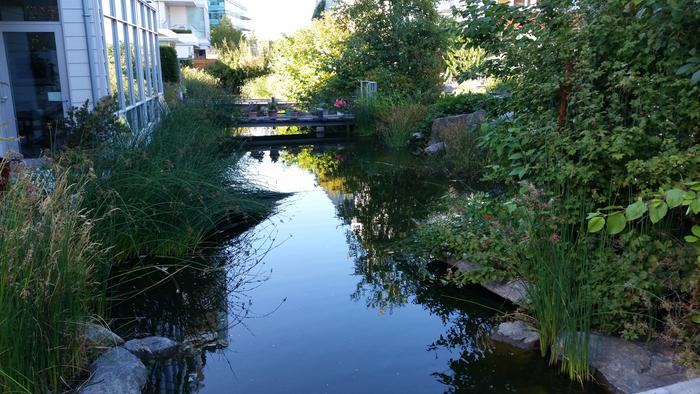 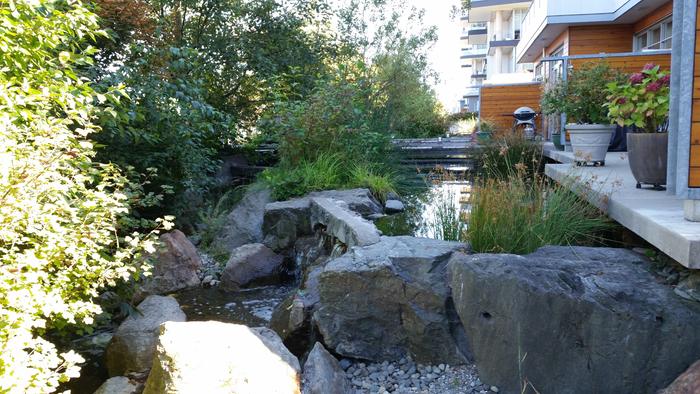 Dale Hodgins
Posts: 9002
Location: Victoria British Columbia-Canada
670
posted 5 years ago
Roof drainage comes down big gutters and then runs into concrete troughs. Water from the open troughs flows through reed beds, before making it to the ponds.
20150821_170215.jpg 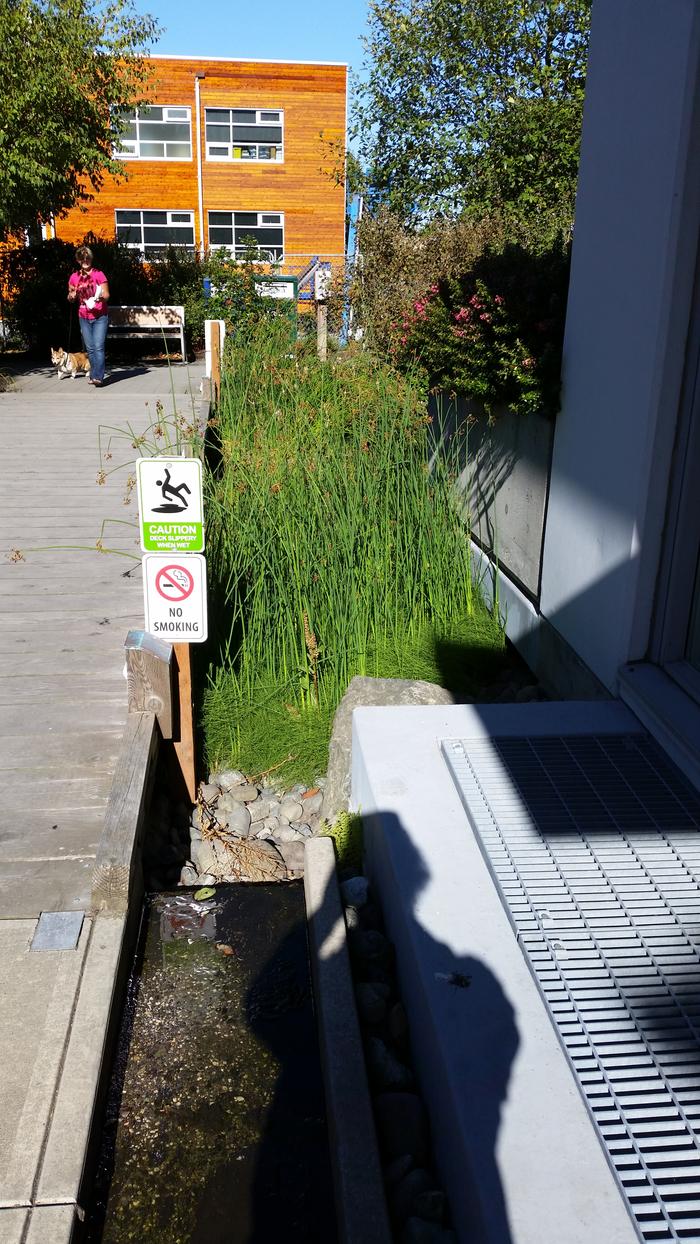 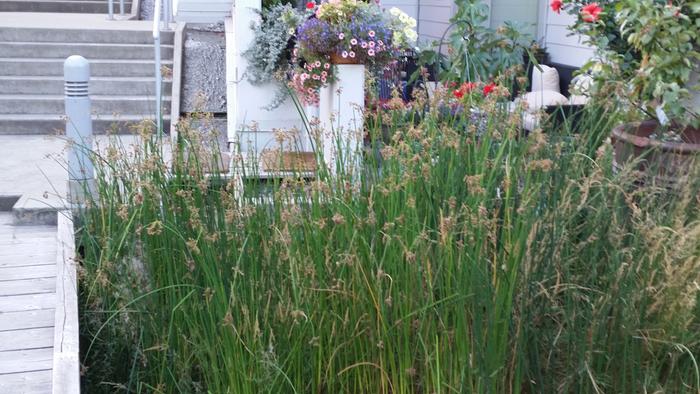 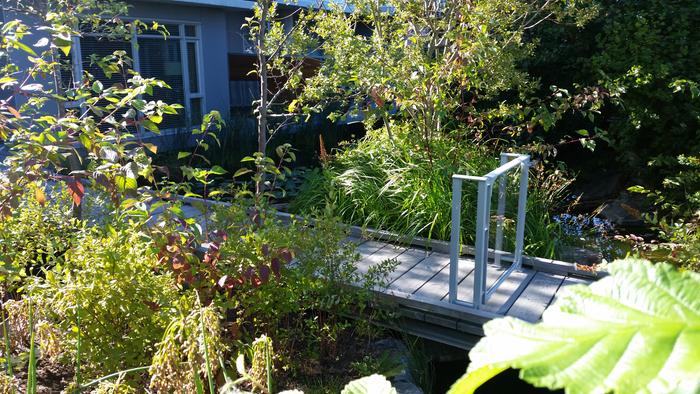 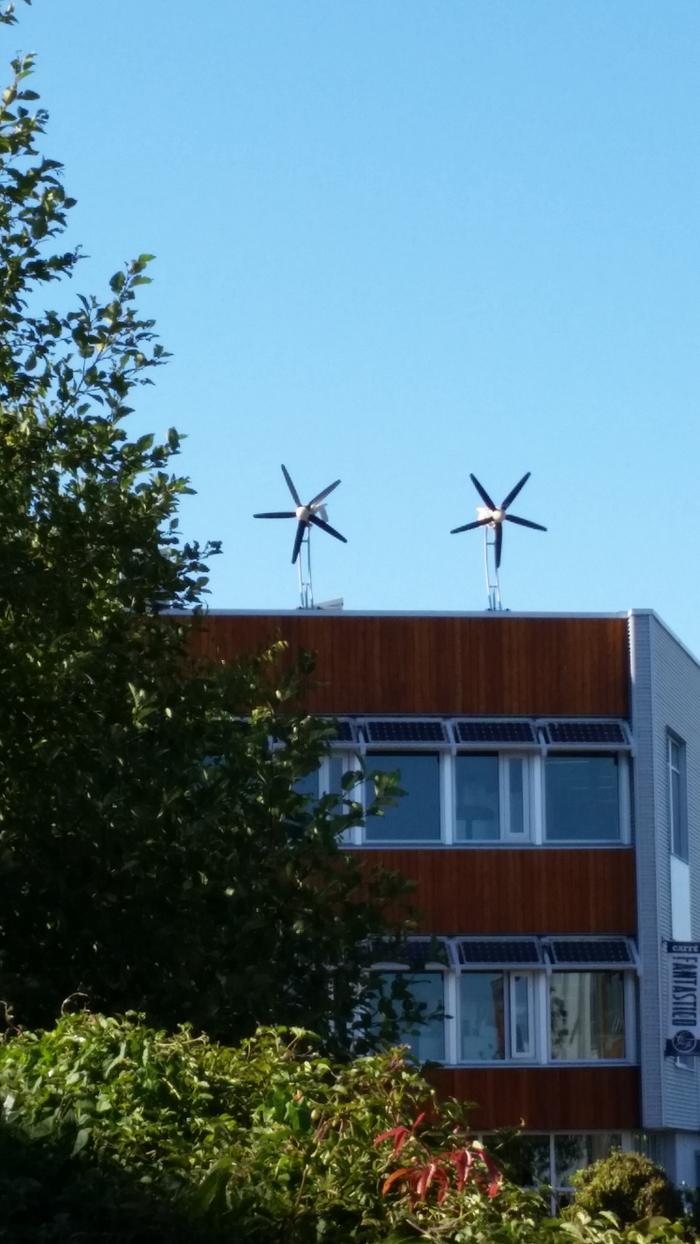 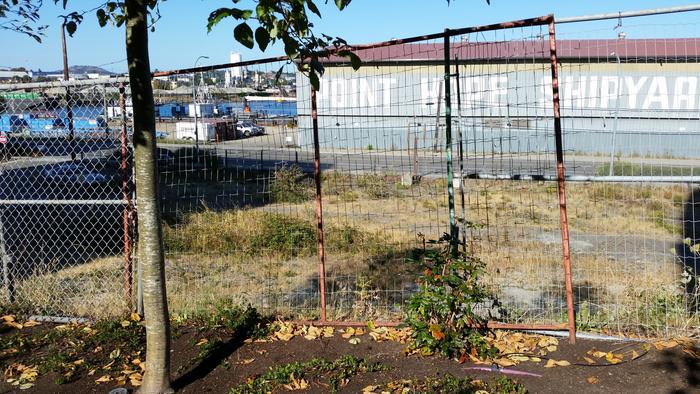 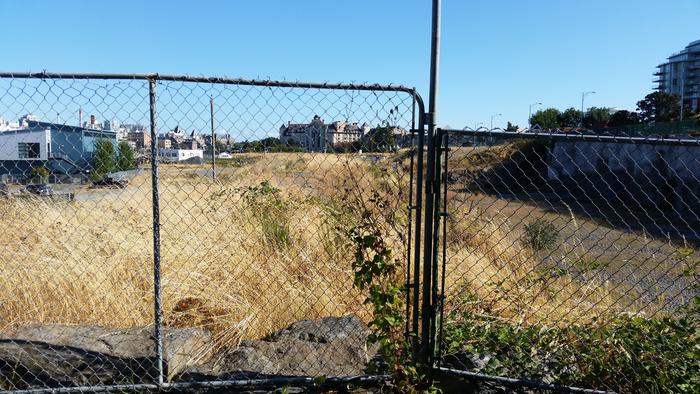 Will Holland
Posts: 300
Location: CT zone 5b
7
posted 5 years ago
Gorgeous!
Bram van Overbeeke
Posts: 47
Location: Marathonas, Greece
1
posted 5 years ago
You say you treat the waste water on site, can I ask if you could post more details on that? I'm currently in the process of doing the same. Though it won't filter waste water, it will just bring the local water quallity up and provide airation. In holland this is called a helofyte-filter. A helofyte being a waterloving plant like a reed or a rush. Basically what we'll do is run the water through a sand filter in an IBC, then a shell bed and then two beds of rushes. The sand will obviously take care of turbidity, the shell will lower the PH so that heavy metals fall out. The rushes then readjust the PH to 7/7.5, extract the leftover heavy metals, a lot of nitrogen and breath out some of the last things like waterbound hormones, hydrocarbons and 'x-icides' which will/should break down easily under UV exposure. Then lastly the water flows through a bed of sweetwater mussels which will fix the phosphate into the mud.

How's your system set up?

posted 5 years ago
What's the story for the last two pictures, the more typical urban pics?

Dale Hodgins
Posts: 9002
Location: Victoria British Columbia-Canada
670
posted 5 years ago
Berry. This is not my system. It belongs to a large housing development. I know that there are big tanks under ground and that toilet water goes to the city sewer. Rain and graywater go to the ponds.

Julia. The last two photos are of similar brownlands that are waiting for development. There's room to fit hundreds more here, without using up any good farmland.
jimmy gallop
Posts: 224
Location: east and dfw texas
3
I like...

Dale Hodgins
Posts: 9002
Location: Victoria British Columbia-Canada
670
posted 5 years ago
I think you'll find that rules vary by state and county.  Even little towns may have their own rulings.

If you make a good case when applying for permission for many things, it is only necessary to convince a few local officials. The federal government doesn't care about my kitchen sink. The Regional District of Nanaimo does.
Dale Hodgins
Posts: 9002
Location: Victoria British Columbia-Canada
670
posted 5 years ago
Across the Gorge waterway, is another group of mixed use buildings that save their rainwater.
20150823_153238.jpg 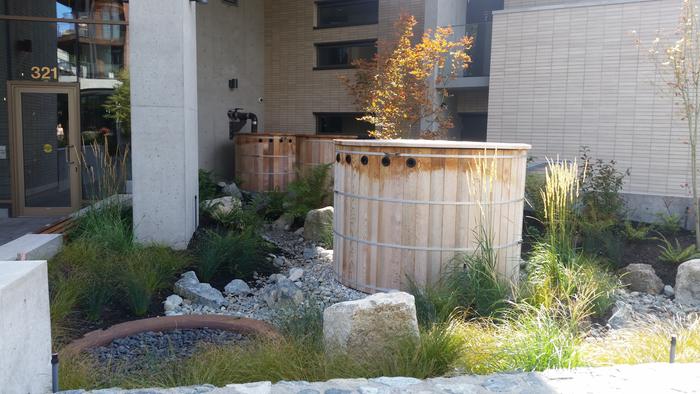 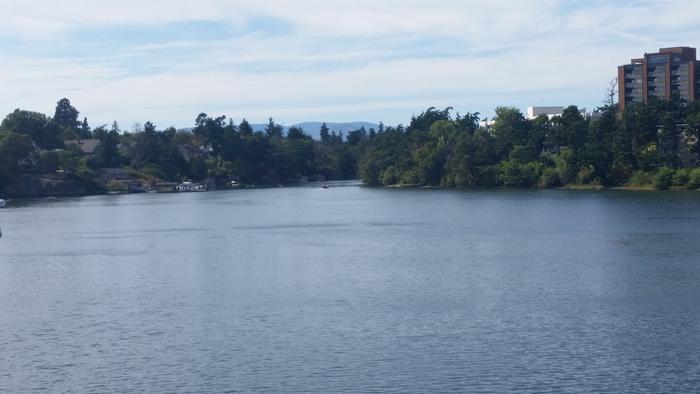 Posts: 3601
Location: woodland, washington
145
posted 5 years ago
so the water isn't being re-used indoor, just for the water feature?

I wish I had heard about this last week. looks like a nice project and I was but a short ride away from Victoria. well, the buildings are horrendous, but the water project is neat.

Dale Hodgins
Posts: 9002
Location: Victoria British Columbia-Canada
670
posted 5 years ago
The buildings are built to a higher standard than most condos. I peeked in the windows and didn't see anything horrendous.

The graywater is only used outside, according to the signs. This development is more than half green space. Although people are packed in tightly, the whole area is very park like. The native riparian plants require little care. They are trimmed away from pathways. Bugs are eaten by predators. No poison is used.

I didn't see any food being grown.

Carla Coleman
Posts: 13
Location: NE Washington State
3
posted 3 years ago
This is a wondrous and beautiful project. Not everyone is able to (or even wants to) live in the country and/or be a farmer. That shouldn't mean they have to live in toxic surroundings. And what a wonderful example to be able to take to my county planning department so they can see it really isn't 'backwards' to want to recycle grey water, LOL.

nancy sutton
pollinator
Posts: 879
Location: Federal Way, WA - Western Washington (Zone 8 - temperate maritime)
72
posted 3 years ago
This speaks to me about the basic strategy of Permaculture ... design, design, design!  It has been 'thought out' to the nth degree, apparently.  What about the windmills on the roof and are those solar panel 'awnings' on the windows?