Another great morning in Montana! https://photos.app.goo.gl/HZYfR4wvSxrmNv1E7

This morning Fred, myself, Logan, and Kyle took the trailer full of glass up to the boneyard and got that offloaded. Here's the trailer, clear of glass https://photos.app.goo.gl/iRB1PSMwgmDBJMFz5

And here's the glass sitting on its stand all loaded https://photos.app.goo.gl/4gr56rKQ95dZJ5pJ6

After lunch I saw this single flower in bloom on the side of the road and it made me smile. https://photos.app.goo.gl/i2HDjFNhSjKwx5xM6

After that, me and Kyle went over to Cooper Cabin and worked on repairing the floor. Here's the section I was working on. https://photos.app.goo.gl/juGxmTLfC9cMwkbx6

Here are some of the many bent nails I accumulated after a frustrating 10 minutes. https://photos.app.goo.gl/BsktWqFxhBK2JvMh8

At the end of that 10 minutes, Kyle enlightened me on the need to have a flat hammer in order to nail correctly. So uhh, yeah, here was the source of my bent nails. https://photos.app.goo.gl/38SvJaSnee2vvsdL7

And here is the finished section of floor. Its rough and I think I could have done a lot better now, but I learned a fair bit making it and It should work just fine: https://photos.app.goo.gl/UysA2DaMCZpNf4Fj8


That's it for tonight, be back tomorrow!

Could you attach your imaged to your thread? Or embed them in some way? I tried using my moderator buttons to embed your picture, but it only did a thumbnail, and it refreshed the thread each time I embedded one, so it took a long time for each picture.

Here's a tutorial on how to attach as well as embed images here on permies: https://permies.com/t/61133/Post-Image-Permies. If you have any questions, please feel free to ask! If you're on mobile, things might be a little different, and I can get you screenshots if you need them.

I hope this helps!

P.S. attaching the images here would probably be a lot better, because other image hosts often stop hosting images. You can see in the second post in this thread someone embedded a bunch of pictures that were hosted on google photos, and google made it so those images no longer show up. Photobucket did a similar thing a few years back, turning all the pictures people had posted into photobucket ads unless those people paid a crazy amount of money. That stinks! But, if you upload the image here on permies, it will stay hosted and uploaded, and not get turned into an ad or a blank image icon!

No problem. I'll make sure the pictures are either embedded or attached to the post in the future. I was just trying to save some time since it can take quite a while to upload pictures.

posted 1 year ago
I totally understand! One thing that's nice about permies is that you can attach them all and then click "submit" and then walk away and it'll upload them all at that time, so you don't have to wait after each picture uploads before uploading the next one.

If upload times are a hassle, you can also resize them before uploading...though resizing things can be a hassle in and of itself. I just tend to upload them all and walk away while the post submits.

Welp. Looks like my post from yesterday didn't actually upload so I guess it's two posts in one today.

Yesterday morning I worked on adjusting the new electrical housing box we got for the sawmill. First I had to pull off the original housing (1 and 2) and any damaged wires. After fixing the wires I began working on cutting a hole in the housing box for the wires to fit through with a return of my nemesis, the Jigsaw(3). To set the box in place to be jigsawed, I had to screw two boards to the workbench, then I nailed the box to those boards with some washers to make sure I didn't bust the plastic of the box. I was more successful this time around, though it was also a cut that was much less precise.

In the evening of that day, the whole Bootcamp went to harvest wood. Seven people were in one truck (Judy) and myself, Dez, and Dan were in another truck (Ranger Doug). However, Ranger Doug only has two-wheel drive and the roads to this harvesting site were still icy in some places. We ended up getting stuck on the ice twice (4). After we had made it out of the ice the truck's engine started putting out smoke (5). So me and Dan ended up hiking a mile to where the rest of the group was at while Dez stayed to see if he could fix up Ranger Doug. Turns out the engine had just overheated and the truck was otherwise fine.

This morning and evening I was working on the electrical box. Much of my time today was spent staring at a shelf, trying to figure out if we had the right nuts or bolts for the additional mountings I was putting in the box haha. But I'm getting ahead of myself. I started out today by adjusting some of the screw holes I made and look! The box fits great now, all four screws in the motor mount and now light peeking through the gasket (6). After that I worked on drilling some extra holes for some switches and wires that have to leave the box (7). And finally, I made a new bracket out of aluminum plate and bent it so that it holds the capacitors inside the box in place (8).

I'll be double checking that this post goes out for sure haha. And I'll leave you all with a picture of the cats all snuggled together.
1-Motor-Wiring.jpg 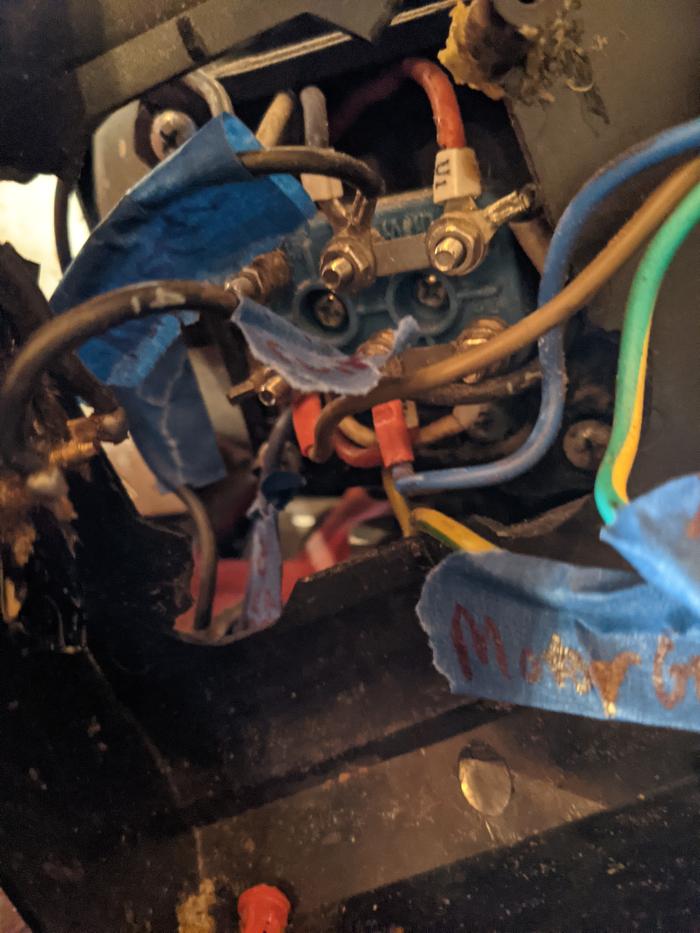 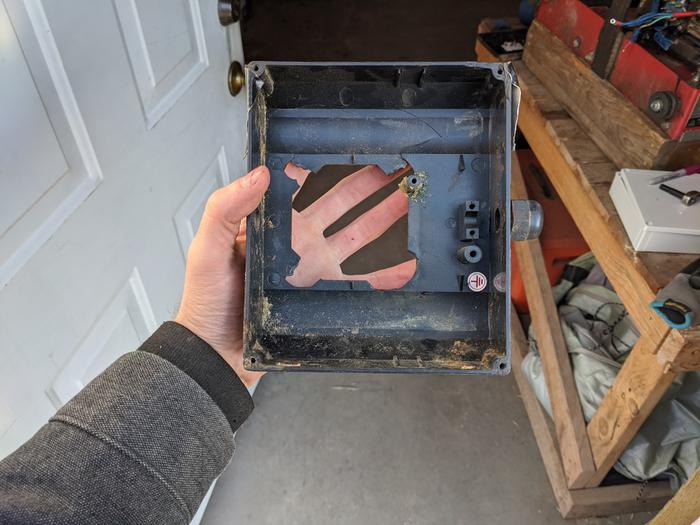 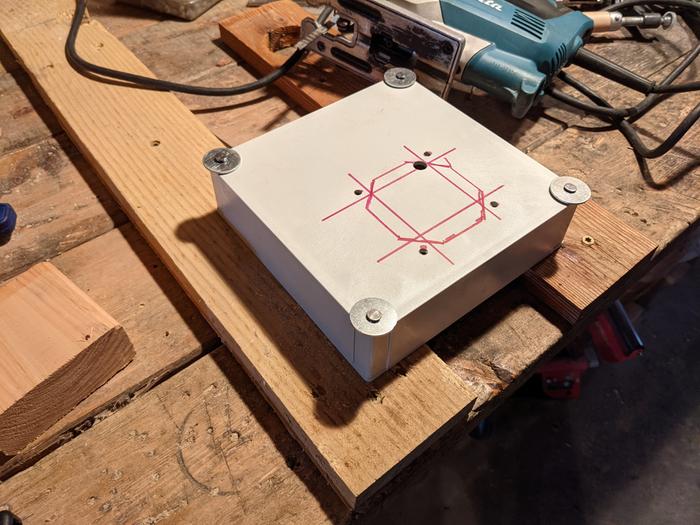 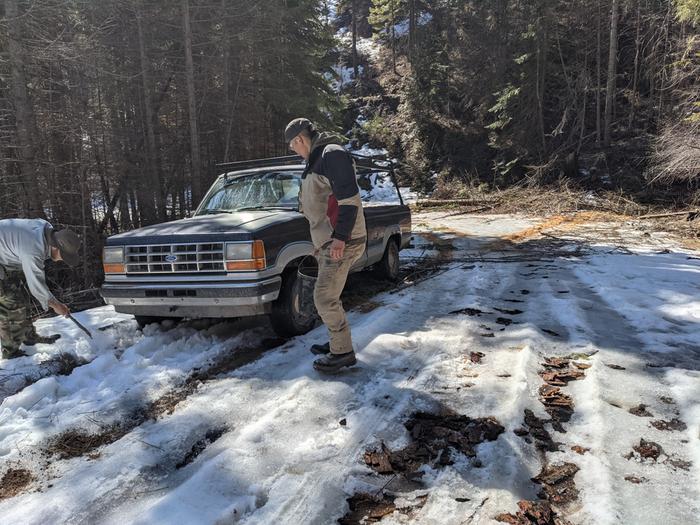 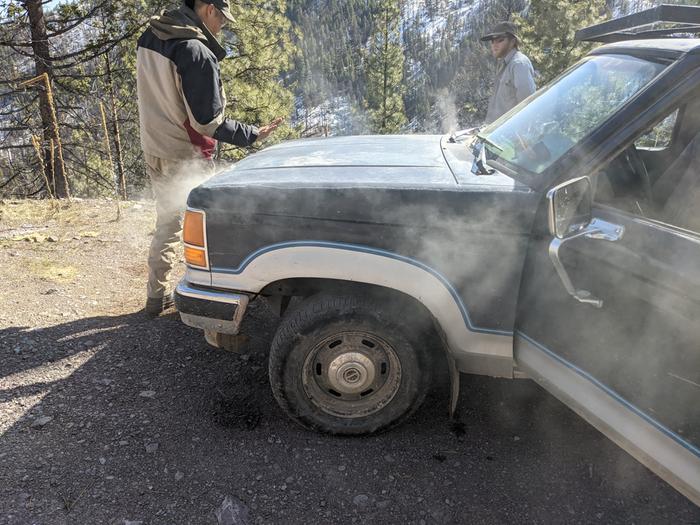 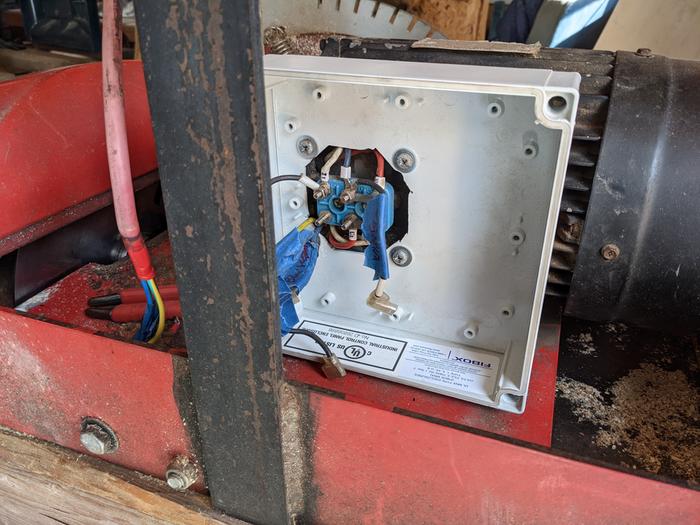 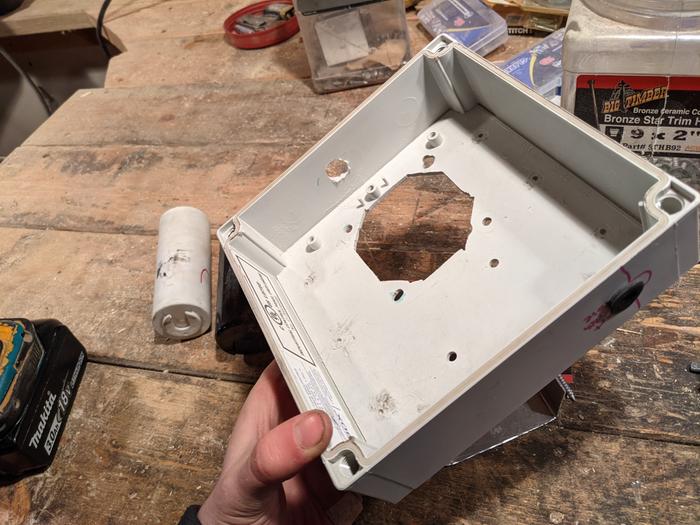 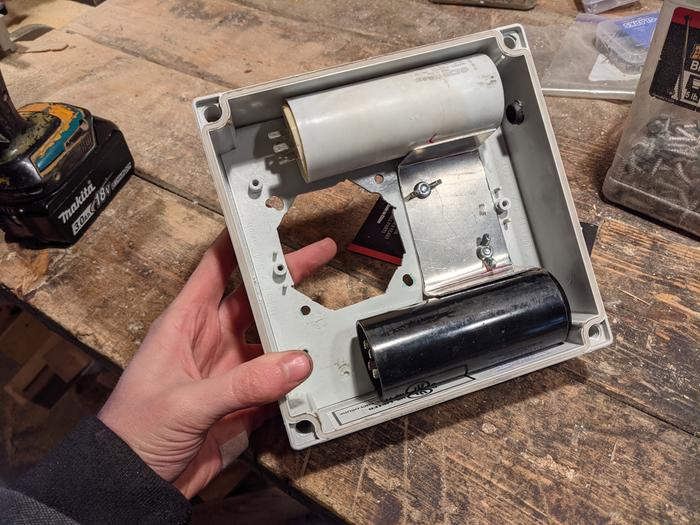 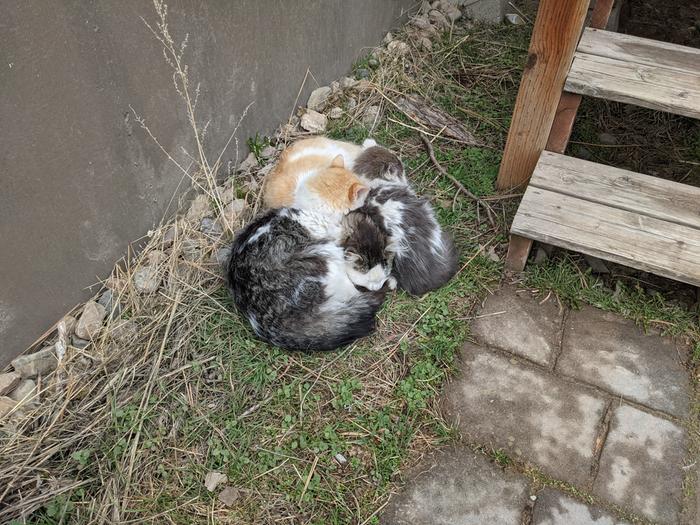