posted 7 years ago
My aunt donna lee died recently. I have now returned from the ... not-funeral.

I have shared bits and bobs over the years about my aunt. One that came up a few times at her not-funeral, is sourdough pancakes, which I wrote about here (first in my sophomore year in college and my prof said "a magazine would be glad to publish this" and I polished it a bit more about ten years ago).

But here is the important thing that I wish to convey: donna lee is super close to her four adult children. I suppose it is a flavor of close that most people in the world think they will have when their children are three or not yet born, but so few ever come close to.

I wonder if people write books about raising children, but their own children turn out to be monsters.

Further, I wonder if donna lee wrote a book about raising children and everybody else in the world read that book, I suspect that only one parent in 10,000 would even come close.

Donna Lee is (was) DRIVEN. She worked hard and she worked a lot. And it was all a sort of dedication to nurturing the people around her, mostly her immediate family. She had her vision for what she thought was good and right and decent, and she would put the work in to move the railroad tracks to that end. The result was that she and her kids came together OFTEN. I think they could not allow three months to pass without seeing each other. It was unthinkable. Letters were sent weekly until they had email and notes could be sent even more often.

The beauty of what they have/had is amazing. The trick is that I cannot think of the words to describe it. And I certainly cannot take a picture of it and show it to you. Video wouldn't work either.

In the world of art we have paintings, sculpture, books, music, plays, dance .... I think we can even count movies and television shows in the world of art. As the centuries pass, we have ways of deciding what has been "the best" for each category. But that requires a way for the masses to come and see each piece and weigh in how they feel. And, of course, some people might like some things more than others - after all, beauty is relative and subjective.

So I offer up the life of my aunt donna lee as a piece of art. It is a rare submission. And if there were a way to take a picture of her life and post it on the internet, I suspect it would go viral. And as the centuries pass, it might possibly be regarded as the mona lisa of this style of art.

posted 7 years ago
Here is the six of clubs from the deck of cards that alexander ojeda and i made a couple of years ago. Not only do I think that "husp" is the most beautiful and important thing to come out of my twisted brain, but .... if you zoom, in on the card and look at the shoreline .... 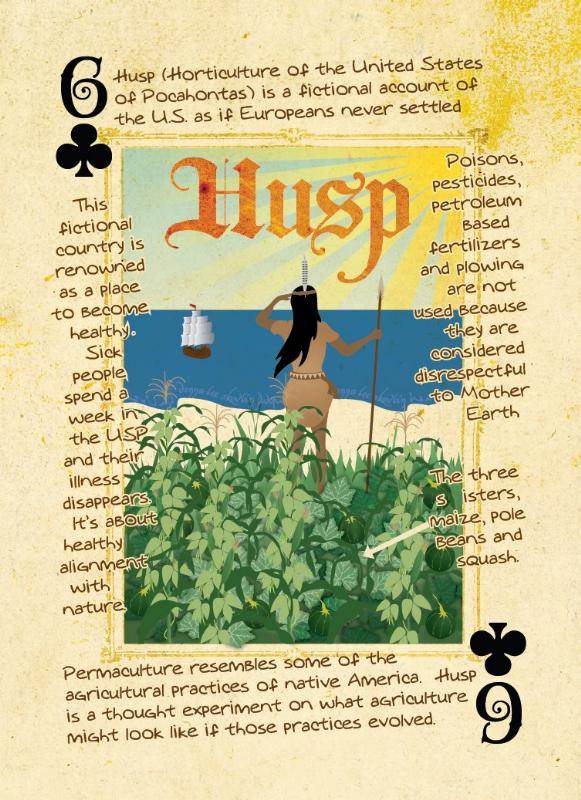 I am still learning the ropes as far as this site goes. Bare with me, folks! Skol!

After seeing Paul's post on Facebook today concerning the life celebration of his aunt, Donna, and after only scanning the Permies forum here at a glance, it has occurred to me that there is perhaps no room for all our "drama" and other issues orbiting rather distantly around the core of what permaculture is all about, and perhaps this is a good thing to some degree, regardless I decided that while I am testing the page/forum/computer tech etc. that I might just as well go ahead and create a new topic where we can shy away from the particulars of our craft in order to allow some room for some more personal stuff, such as was shared by Paul on Facebook earlier. In which case I will repost what concerned me there:

Paul:
"When I was 16 I was rather ... different. I suppose you could say "broken". My aunt donna lee took me in and showed me "family" in a way I had never seen it before. She gave me a mountain and asked for a bucket of dirt in return. I fell short on that bucket. I have enough to say here that could fill six or seven books. She died a few weeks ago. I recently returned from her "celebration of life" (not a funeral or memorial). All sorts of weird feelings. Today I present the six of clubs from the deck of cards that alexander ojeda and i made a couple of years ago. Not only do I think that "husp" is the most beautiful and important thing to come out of my twisted brain, but .... if you zoom, in on the card and look at the shoreline ...."

[Image of the six of clubs from the Husp (Horticulture of the United States of Pocahontas) deck of cards that Paul created which references his aunt, Donna]

"See, the thing is that I wrote the above analogy to an oak tree because, while Paul might see his aunt in such a light, it is also good to remind ourselves at certain times in life that we too are literally "enlightened" by those we look up to along our way, and that this enlightenment doesn't just stop. It goes on, literally forever.

By our actions we pass this light onto others. So, maybe it was/is part of her that I and surely many others recognize in you, Paul, that we identify with and find meaningful purpose in.

All I know is that when I 'met' Paul online I instantaneously felt healthy inside and hopeful. Watching Paul in his videos etc. was like staring at a new undiscovered but highly effective medicine. Medicine for a broken heart and a broken soul nearly completely withered away from existence.

After having gone through my own "different" experience, though I am much older than Paul was when his aunt took him in, even though Paul and I are not related, or that we haven't officially met or even texted much, if at all, I intuitively felt "taken in" by the Permies group. I saw a "family" that I could belong to. I saw something healthy to do, productive, hands-on, industrious, a vast community of others to exchange with in time... the permaculture lifestyle would resonate deep within me right at the time when I needed this most (not all that long ago).

Now, chances are that I am not the only one who would find a second chance at life, and something to look forward to that was earthy and good; wholesome. So, while we sometimes look up to others, and look back at our shared past with them in honour of their life and memory, we tend to forget that their light shone on and for us also, and we were infected by that light so that we too would then pass on this "torch" to others, maybe without even realizing it.

"You know, a mighty oak tree gets blown down by seasonal winds, is swiftly slammed onto our earth with all the acorns scattered about, everywhere... and we do our best to harvest them all, but some escape the clutches of man and root right where they lay, unseen at first. In turn these grow into their own might, only to perpetuate the cycle all over again, endlessly. She was no doubt one of these acorns, one of these mighty oaks. But so are you.

We all come from somewhere.

I am slow when it comes to joining new groups of folk (once bitten, twice shy - eviljesusfreaks; long story), but for me it is as though Paul & co. already HAVE taken me in... simply because of living the way that you all do, and by embodying the values (the light) that you all have within you. And maybe that is enough for me, and others. Maybe we never even meet up in real life, maybe we never have a conversation or ever even exchange emails, and maybe I never figure out how to contribute to the forums because I am so retarded when it comes to registering and figuring out stuff like that - but - the bottom line here is that it doesn't matter if all that other stuff happens or not. It is nice that we have it all set up online so we can exchange our ideas and all that stuff but, really, it is only the cherry on top of the sundae. What matters here are the choices we make that allow us to become the people we are in the first place so that we can help others find themselves when they lose touch with their identity, purpose, and core values in life. While it is nice to be a part of our clan, and all that goes with it, it is even nicer and much more valuable to just KNOW that our clan even exists in the first place. So, thanks to your aunt for leading by example so that you might become the man you are today, inspiring others to do the same. And thanks to you too, Paul, and to all who continue to sow their good seed in our good earth so that one day someone might stumble upon such a place where the might of oak trees covers the land as far as the eye can see.

There is no death, only a change of worlds. - Algonquin proverb. "

While some things can be and are known, most things are unknown.

paul wheaton wrote:
So I offer up the life of my aunt donna lee as a piece of art.