posted 6 years ago
Some days, going to the garage and estate sales isn't worth the gasoline. This? Not one of those days.

Arrived at an estate sale out in the country. Old boy (the departed) had a house and several outbuildings full of stuff. His kin were selling it off in a terrible hurry, with nothing priced and very little pulled out for display. Just wander around, rummage, look, and find someone to ask for a price. Raining lightly and blowing a 20mph wind. Not much signage for the sale (I had found a bulletin board notice about it) and not too many people there. A disorganized damp chilly mess, in truth.

My budget at these affairs is low. The fancy shop tools, lathes, radial arm saws, routers, bandsaws, power tools, chainsaws, tillers, tractors -- I usually don't even look at that stuff. Nope, I stay low-tech: gardening stuff, buckets, tubs, hand tools, shovels, rakes, that sort of thing. Garden hose fittings. Anything I can use for gardening or construction, if it's cheap enough. Plus I am always keeping my eye out for "they don't make it any more" homestead tools -- low-tech machines for growing, preparing, and preserving food. I mostly can't afford the few solid genuine functional antiques, but sometimes people don't know or care what they have.

Quickly bought myself a number of cheap hoes, shovels, and digging implements. Then I scored a tower of buckets and flower pots for my container garden. Wandered into the house, through the house, and onto the back porch, where the stuff was piled deep and confusingly. Saw a thing.

What caught my eye was that it was a large heavy cast iron thing with gears and a crank handle. Sort of like an ice cream maker but smaller and much heavier, set on a heavy slab of oak almost two inches thick. What it seemed to be was some sort of ancient press, 120 years old if it was a day.

I fiddled with it. I examined it. Unbroken, no visible cracks in the cast iron, gearing all seemed to move and work, not very rusty, lots of embossing in the cast iron. Definitely some sort of press. Seemed to me that it might be useful for pressing apples or grapes on a small-batch scale. But way too heavy to have been designed for that work. Still, I've got apple trees coming on, and grape ambitions. I've known for awhile I'll want some sort of juice press, and it seems an unlikely ambition with my current budget. So I gotta ask the lady, preparing myself for the inevitable disappointment.

Found the lady. Asked her if she knew what it was. "Oh, yes, that's a sausage press." Then another customer dragged her away before I could ask the price. I went back and looked. Yup, I can see how you could affix a feed tube for sausage casings. That makes sense. I'm thinking "I don't even eat meat, what do I want with a sausage press?" But then I remembered the apples and the grapes.

Found the lady again. "How much you want for that sausage press?"

She looks at me. She thinks. Pauses for way too long. Then: "How about seven?"

Now, in my mind I was figuring this thing was worth a couple hundred bucks. I was prepared -- not because of value but because of the thin feel of my wallet -- to do twenty bucks, maybe 40. My first thought when she said "seven" was that she meant $700, and that she was one of these people with a ridiculously inflated sense of the value of "antiques".

And then I caught myself. This sale was fast and dirty. The most expensive price I had heard mentioned by then was $500 for a roadworthy ATV trailer. Could it be? I said "Sure, I can do 7 bucks." She didn't flinch, so I reached into my wallet, stripped out a five and two ones, and tried not to be hasty about shoving it into her hand. Then I repaired with all deliberate speed back to the truck with my prize. 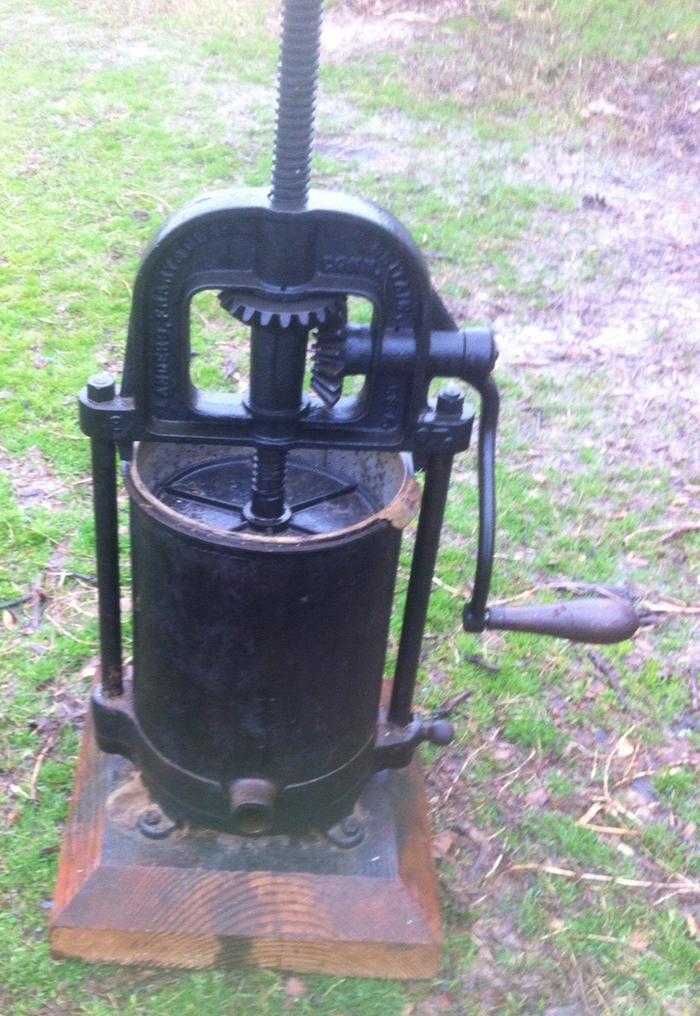 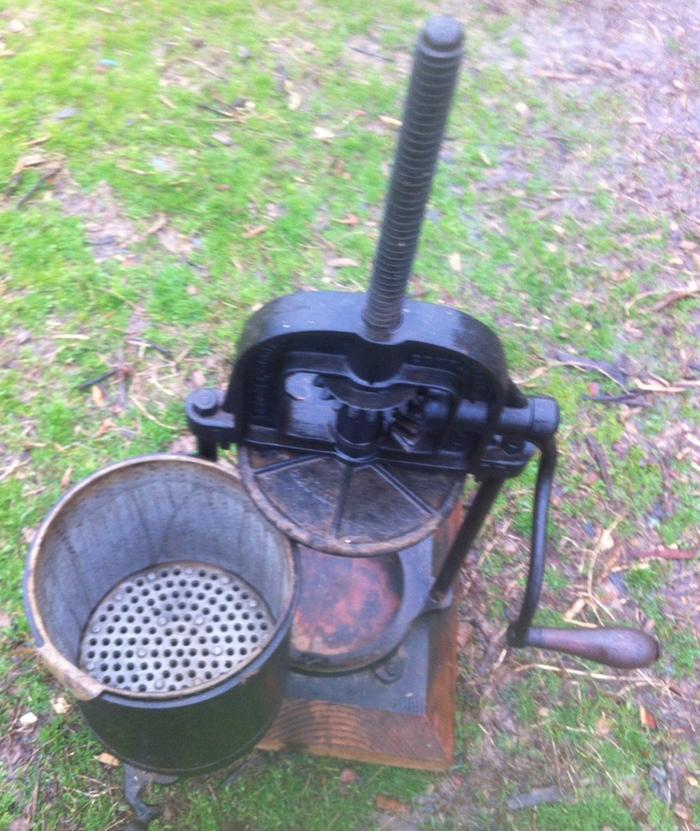 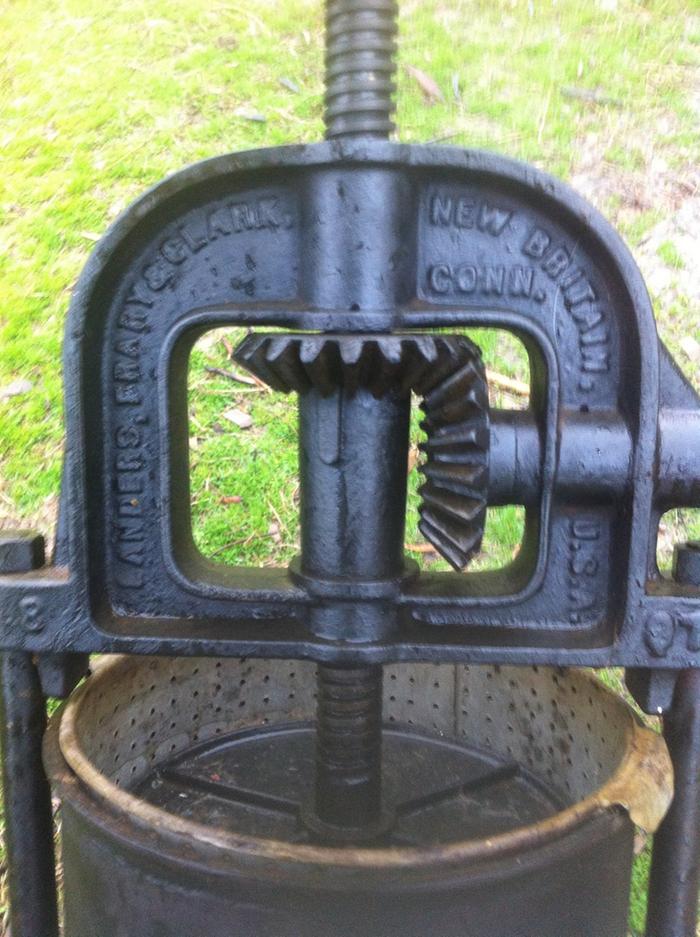 (If you right click on these images and open in a new tab, you can view them in a bigger size that way.)

I apologize for the poor pictures. It was still raining and the light was bad when I took them. But as you will have no doubt deduced from the self-congratulatory tone of this post, I think I bought a real treasure today!

Well, in addition to making sausages, this sort of device seems to have been marketed as an all-purpose food press. Apparently "back in the day" people did a lot of pressing stuff, and this sort of thing was an essential utility for the well-appointed home. You see devices like this mentioned doing duty as apple and grape presses, jelly presses, cheese presses, and even lard presses (apparently for pressing the hot lard out of the cracklins when rendering). Apparently these old sausage presses are also really handy for pressing honey out of comb. I don't have apples or grapes yet, nor make cheese, nor render lard, and though I really want a hive I don't have one of those yet either. But what I do have is buttloads of persimmons, and my primary way of preserving these is to freeze the pulp. Extracting the pulp from the seeds and skins is currently an arduous process: I put the fruit in a mesh bag and squeeze until my fingers fall off and the pulp drips off my elbows. I do believe this press could make short work of my mesh bags!

And how old is my "new" sausage press?

That's an interesting question. It's old as hell. It's very possibly the oldest thing I own, with the exception of a couple of family heirloom trinkets. It could possibly date all the way back to the Civil War era. According to this website, the company that made it only used the "LANDERS, FRARY & CLARK" brand between 1862 (when Landers bought Frary and Clark) and the 1890s sometime (when they started using the "Universal" brand on all their stuff). What's more, they were selling sausage presses before 1870. So I would date it sometime between the 1860s and the 1890s:


In 1862 the small but prosperous company...acquired the firm of Frary, Clark & Company, of Meriden Connecticut. The company name changed to Landers, Frary & Clark, which it retained for the next full century of its existence.

Probably the most important item introduced around this period was a household scale, "the first product designed particularly for the American housewife," White explained in his speech.

In 1870, George Landers, having turned fifty-seven, decided to retire from active management, but to stay on as vice-president and director. His son was now secretary of the company.

In the 1890s the trade name "Universal" was adopted for the company's products.

It's not perfect. The bucket-sieve inside is not in perfect shape (it looks galvanized and OK, but I saw suggestions that these were sold with a shiny tin coating, which if true has mostly worn or corroded away since.) My bucket also has two ear/tabs at the top for convenience in removing; one of mine's ears is torn and bent slightly, not affecting function. And this sausage press does not have all its original accessories. There appears to have been two different sizes of press plates (I'm unclear on how they differed) of which I only have one. There may or may not have been an additional plate under the sieve-bucket; more research is needed. And there was definitely some sort of brass or tin filler tube that fit inside the output port in the cast iron press bucket; I don't have that, although a replacement would be easy to improvise. But, as Johnny Cash says in that song about the flag, "she's in good shape, for the shape she's in."

Wish I had one

posted 6 years ago
I love the setting. Your auction is almost verbatim what Charles Long calls ideal in How To Survive Without A Salary-secluded, bad weather, poorly advertised, and on a weekday!

(I think you'd really enjoy HTSWAS, too, Dan, if you've never read it.)

Anyhow, congratulations! I believe that will be a useful tool for sure!
Dan Boone
gardener

posted 6 years ago
Mike, that does sound like my sort of book!

Adventures in Insomniac YouTube Theatre: I was looking at videos (mostly under the "Enterprise" later brand name) to learn about accessories and attachments. (More on that later when I am not thumb-typing.) What I picked up unexpectedly was several more uses for this press, including:

Dustin Boyer
Posts: 1
posted 5 years ago
Hello Dan. I picked up this exact press this weekend in Missouri at an antique store just north of Osceola. My brother has one he bought at an auction several years ago for $150. Although his differs from ours just a bit, (his gears, crank and press rotate where ours the "tank" I believe swivels out from underneath the press if I'm looking at your pictures correctly) I was happy to find it for $55. You got a great bargain. I only have one question for you. Does yours have 2 small nubs on the outside of the output hole? I didn't see the large cast iron ring on yours that actually holds the stuffer tubes on. I've found these tubes in 3 different sizes (3/8",1/2" & 3/4") and have seen themade in plastic, aluminum and stainless. Mine didn't come with any tubes, but I have a few stores locally that sell them. I wasn't aware they were used for juicing, which is really cool. We use my brothers to make homemade brats, and breakfast links. I didn't see that keeper ring in your photos, and mine was also missing. I'm in the process of finding one, and of I can't buy it I'll make it. My wood handle was also REALLY dry rotted, so I'm going to have my brother spin me a new oak one on his lathe I believe. Let me know if yours has those "nubs" I was telling you about. Thanks!
Pete Page
Posts: 1
posted 1 year ago
I just purchased an 8qt sausage press like yours for $25. It’s a pretty cool piece! Thanks for the research you did!