Josh T-Hansen
Posts: 143
Location: Zone 5 Brimfield, MA
1
posted 10 years ago
I recently made 10 cups of acorn flour from 15.5 pounds of acorns.  At this scale it took a bit of time but I will do it again next year.  I think the yield could have been bigger if I had used more of the larger acorns which are supposedly less bitter (see picture) however, many smaller acorns were used because they fell on the driveway and could be swept into a pile for easy gathering.

I am mainly posting this because when I researched how to do this I saw people on youtube using a nutcracker as shown in the picture.  The pliers worked a lot better and I was able to rapid fire through many acorns at a time while comfortably sitting in a chair.  crack drop, crack drop...

After coarse grinding, 5 washes of boiling water removed the tannins.  I read that leaving the coarse acorn in a sack in a river also works, but I wonder if that would remove the skin that is on the nut, which floated off when I drained the formerly boiling water. 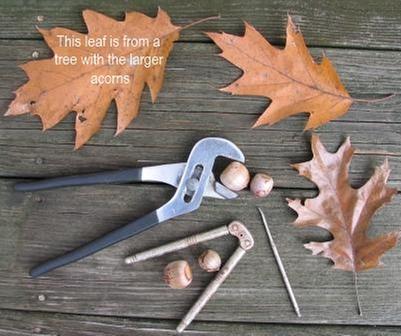 Posts: 1
posted 10 years ago
We gathered a few pounds of acorns earlier this month, shelled whole and boiled to blanch the tannins to no avail. I'm curious to try coarse chopping first before boiling to see if that makes a difference. I got the impression that the bitterness can never be fully removed, that the flavor would need to become an acquired taste?

Also, how long will the flour keep once it is processed?
Josh T-Hansen
Posts: 143
Location: Zone 5 Brimfield, MA
1
posted 10 years ago
I ground the acorns in a food processor before washing 5-6 times, and then after it was dried I ground it a little finer.  There may be a very slight bitterness left but I can't taste it when it is in bread or pancakes etc.  Many people have tried the bread (half acorn/half whole wheat) and loved it.  I think acorns can vary greatly in tannins, but grind before you blanch and give it another try.

In an airtight jar this flour has lasted over a month, but it was in the freezer or fridge for most of that time.  I'm guessing well dried flour could last over a year in the freezer but I'm not sure

Joel Hollingsworth
pollinator
Posts: 2103
Location: Oakland, CA
9
posted 10 years ago
I believe that treating with lye can remove all bitterness. Still takes some washing to remove any excess lye.

Compare Kalamata olives, where the bitterness is only removed by changing liquid, to Lindsay olives (the mainstream black ones that come in a can and taste like almost nothing), which are treated with lye.

Posts: 144
posted 10 years ago
If you can find them White Oaks and Chestnut Oaks not only have the largest acorns but the least bitter (so I am told, I've only tried red and white oaks) Some white oaks are supposed to be so free of tannins to be edible raw, but I have not yet found such a tree.. (though I continue to look..)

We are low on acorns this year thanks to the drought.. so no experimenting with them until next year for me..

To love the world is to want to know it. To know the world we must accept it. To accept it we use reason to understand it. Never should we shun reason or condemn it.

3 nice points in this video,
The acorns with grubs float and those without don't
Acorns can be cold leached by just changing the water twice a day
The weevil grubs are edible...and it is explained how to easily harvest them


His website also explains the difference between cold and hot leaching of the tannins.  www.eattheweeds.com

Delilah Gill
Posts: 35
Location: Southern Georgia
1
posted 10 years ago
The overcup oak produces the largest acorns and has the least tannins, but is a very slow grower. They can be ordered through the State Forestry in some states.
Lana White
Posts: 13
posted 8 years ago
What I've found easiest is to divide the acorns into two and dry in a 200 degree oven for a short while, then coarse grind them, then leech them. The drying makes the hand grinder work easier.

I leave some coarsely ground acorns for a nut in bread and grind the rest of it fine. I prefer it all fine, but some of my friends ask for "acorn nuts".

I too prefer to use a regular pliars to crack the shell. We have more small nuts here that the nutcracker doesn't work on. I don't see much difference in taste between larger and smaller nuts, but it's hard to tell. Once you have cracked the shell, you can just peel it off.

Alder Burns
pollinator
Posts: 1604
Location: northern California
217
posted 8 years ago
Most of the local acorns here (Calif. blue and valley oaks) have a thin, pliable shell comparable to that of a chestnut....not really amenable to cracking. I've found simply clipping them in half with a pair of hand pruners, and then into quarters, is the easiest way to open them. See my post under Acorns on this forum to find out what I do then.....I'm attempting to make them a serious staple of my diet, they are so abundant here.....
Jordan Lowery
pollinator
Posts: 1528
Location: zone 7
18
posted 8 years ago
Every year I collect them and store
Them to make flour, I give it to this person i know who makes chocolate acorn muffins with nuts and honey and dried fruit they are awesome. We have a good few weeks left before the good ones start dropping.

It makes a food flat bread for topping with beans, chili, cheese and if you like a spiced meat.