posted 4 years ago
As southern New England recovers from a bout with Gypsy Moth caterpillars that is (according to many here in RI) the worst invasion since 1983, we're forced to ponder a few things:

Why are they here?
How does the invasion spread?
What slows down the wave of defoliation?
How do we deal with this in the future?

Some of the answers to these questions are very straight forward, while others are contentious... there are many thoughts about what to do in both the present and future, and not all of them are good (from a permacultural perspective).

Why are they here?

Well, the nature of the beast is that some guy (http://www.fs.fed.us/ne/morgantown/4557/gmoth/trouvelot/) in the Boston, MA area released some moths accidentally in the late 1860s.  His start-up plan was noble; make a better 'silkworm.'  Unfortunately, this did not work, and the only thing this guy was able to start was a major forest pandemic for the subsequent years.  See: https://en.wikipedia.org/wiki/Lymantria_dispar_dispar#/media/File:Gypsy_moth_spread_1900-2007.gif

How does the invasion spread?

Like any other insect, gypsy moths and their caterpillars can move on their own legs/wings.  No surprise there.  What many people might not think of is that they also look for vectors to increase their spread.  One such helper is the wind; caterpillars can spin fine threads and wait for the wind to take them to greener trees.  A byproduct of this spinning of strands is that the little guys hang from the skies (trees) like paratroopers, and can easily grab onto passing animals, people, and vehicles.  This also acts as a vector for their spread, and the results can be seen clearly as we travel the roads of RI and CT; it is readily apparent that the busier the road, the more likely the trees are bare.  Take a look at the attached photos; one shows a main road, another a side road, and the third shows a dead-end rd.  These photos were all taken this past week (end of June).  Notice a difference?  Of course there are many other factors that affect their spread, but human action is certainly a big part of many of those.  For instance, several states in this region have banned the transport of out-of-state firewood and timber products (unless of course you have a license to do so).  Another example I was quite surprised by was when I opened up a cardboard mailer and found a pupa nestled in a fold of the packaging.  Maybe it was an attempt by some evil entomologist to spread these critters, and if so, consider it foiled.

What slows down the wave of defoliation?

There are many natural factors that reduce populations (https://en.wikipedia.org/wiki/Gypsy_moths_in_the_United_States#Factors_that_affect_gypsy_moth_populations & http://msue.anr.msu.edu/uploads/files/e2700.pdf), including predators and pathogens, but something we've noticed is that forested areas with a greater diversity of tree species tend to be better off than those areas that have a prevalent species.  Even oaks, when mixed in with many diverse hard and softwoods, are not as defoliated as a lone oak in a forest of maples, and are far less damaged than an oak forest.  This may be because the more diverse forests harbor a broader range of predators, or even that the diverse wood will force the caterpillars into the open or on the ground more often as they try to find suitable food.  Whatever the reason, biodiversity seems to be a good non-chemical means of slowing their advance.
But lets assume for a moment that not everyone has the awesome, biodiverse forest that dreams are made of... terrible, I know.  People around here have been treating the invasion with many different strategies, getting different results, and impacting the biosphere in different ways.
The most commercial effort involves the generalized broadcasting of insecticides that are supposed to target the caterpillars.  Trees treated in this manner tend to look great to the landowner, don't suffer the defoliation, and go about their business as if those gypsy moths were just someone else's bad dream.  The problem with broadcast spraying is of course the collateral damage.  Rather than going into this in depth here, it's best to just do your own research as there are many chemicals, many studies, and many (sometimes different) results.  Loving bees, this is not something I choose to do.  On a personal note, I also avoid BT, as there are mixed reports on its impact on humans, and I like a properly-functioning gut...
Driving around, many landscape trees can be seen with big burlap bands, tape, aluminum foil, etc. wrapped around the trunks of trees and shrubs (what's funny is when someone's ornamental yard trees are carefully wrapped, but the bigger canopy trees nearby offer no resistance to a caterpillar climbing, then dropping into the ornamental from above... getting trapped on the wrong side of the wrap).  The wrapping can work as long as each is inspected and maintained regularly.  We've found success with aluminum foil and grease (crisco, blended with nasty things to keep the deer away); the grease is an excellent trap for any who stray onto it.  It's amazing the 'traffic jams' that will pile up under the bands, but there is danger in the hoards advancing up the trunk by bridging the grease of the wrap on the backs of their captured comrades.  A solution we only recently came by is the utilization of the propane vapor torch (500000BTU/hr) to help ease the passage of the caterpillars (and pupae) from this life to the next... less messy than a shoe, and the bio-char is good fertilizer for the soil surrounding the trees they were on; win/win.

How do we deal with this in the future?

We can safely bet that the gypsy moth isn't going away anytime soon, so we will need to address this insect as a part of our greater ecosystem.  Of course, nature will find a balance, so the various plant species that are least affected by the moth will do well in forests over the years until the moth has less and less food, and the populations balance out.  That said, we can also engineer our forests to include more diversity, and in so doing, establish trees that will replace those lost on account of gypsy moths.  Cultivating biodiversity is likely the option that will see the forests and the moths reach an equilibrium sooner. 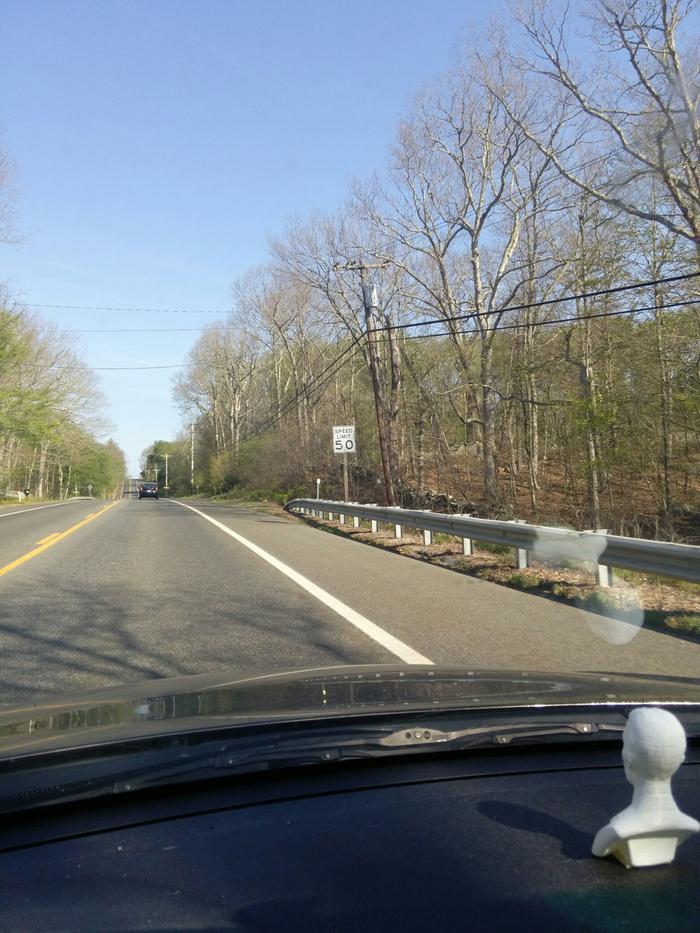 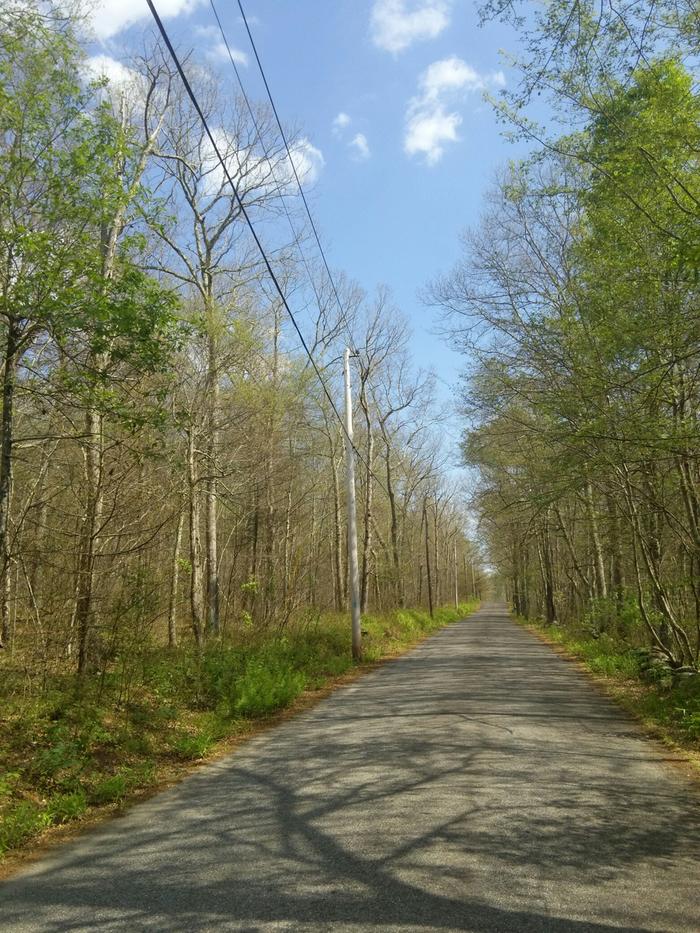 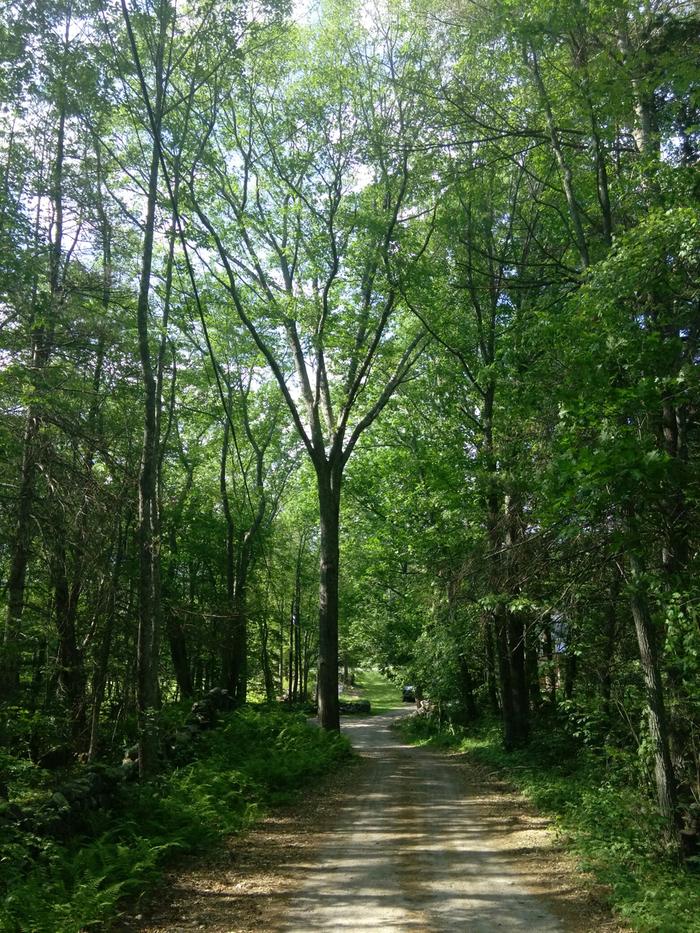 Your first photo looks like Rt. 101 from Foster to Scituate.
I'm in Cranston and the moths have seemed to have avoided us here in the Phenix Ave. area

posted 4 years ago
You're good with your western RI locations, Jim; indeed it is Rt. 101.

I'm glad the caterpillar destruction has missed your area.  Right now the hoards are winding down (pupating), and the woods are beginning to look some some kind of fairy realm with all the moths flitting about. Quite surreal, and rather pretty to watch... the birds and woodland critters are certainly not wanting for food right now, that's for sure!
Greg Coffey
Posts: 17
Location: Rhode Island
7
I like...

posted 4 years ago
NASA just recently got in on the documentation of the problem with some satellite imagery: 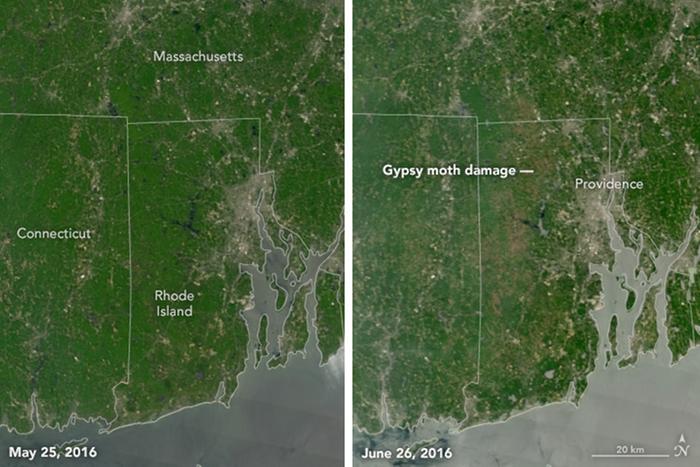 posted 4 years ago
Wow, those are pictures that really are worth a thousand words. I really wasn't understanding how severe the damage was you were discussing. That looks like calling it a natural disaster would be reasonable.