Ronaldo Montoya
Posts: 121
1
posted 3 years ago
Hi, i have a big pot with a lot of plants of alloe vera. This big pot is in a flat i just rented. It seems that there were a parent plant and around it grown its children and now the pot is full of alloe vera.  I decided to transplant two of the small child plants to another pot. I followed some videos i found in youtube.
When i transplanted the child , they had small roots , i transplanted them but i didnt irrigate them , because in the youtube video i saw it said that is not a good idea to irrigate the plants inmediatly after the transplantation and its better to wait some days.

The problem is that after 4 days of transplating (without irrigation) the plant began to became brown instead of green and the plants began to look bad, they dont look vigorous, so i decided to irrigate them, i irrigate them two days ago but the plants still look awful, they look brown and it seems they are dying , do anybody have an idea of whats going on?  Any idea?

Tobias Ber
Posts: 525
Location: Northern Germany (Zone 8a)
25
posted 3 years ago
hey... did you move the transplants to another place?
they need some time to adapt to sun and turn brown, when they do not have the time to slowly adapt.

posted 3 years ago
Don't give up on them.  They are tough little suckers.  They may rally and come back.

1.  Place them in a semi-shaded location.  My aloe vera nursery is under a big Aprium tree.  They get very limited sunlight there.  Aloe vera don't like a super hot and sunny location in general.  People think of them as a arid loving, sun loving plant, but they are really an understory plant.

2.  Water them, but don't over water them.  I think you made a mistake by not giving them some water -- particularly if they are in a small pot.  Once you heat those roots up, the top of the plant goes into shock.  Small pots get so hot, particularly if the pot itself is in the sun.

You'll need to baby them and give them a little drink daily.  If you've got a sandy cactus mix, it doesn't hold much moisture, so a daily drink may be necessary, particularly, as I said, if they are in tiny pots.

You may want to bury the pot up the rim, so that the roots don't get so hot and your planting soil doesn't dry out so quickly.  Once the plant has established itself, just pull the pot out of the ground.

posted 3 years ago
they can last for months without water even if they look crispy they can still come back. Pour water over the centre form the top, it finds its way in thru the "leaves". In future if you do this make sure to wet the roots before you plant and water from day 1. I put the newly separated baby aloes in pure sand and water every day. They are in full sun. Maybe part shade is better, I never tried but mine seem to do well and it's hot and dry here.

John Elliott
pollinator
Posts: 2392
88
posted 3 years ago
I will second the replies that say not to give up, give it time.  I had an ugly old plant that I left out in the winter weather, and by March when it started to warm up, I figured it was dead, the freezes had killed it.  I was in no hurry to reuse the pot, so it has just been sitting out in a corner of the garden, and damn if it doesn't have a little sucker that popped up out of the roots!  It's come back from the dead.

I suppose I should have consulted Miracle Max from 'The Princess Bride' and he would have been able to tell me that my aloe wasn't really dead, it was only mostly dead.
Ronaldo Montoya
Posts: 121
1
posted 3 years ago
It has passed 10 days and the plant still look brown, i have irrigated twice but it didnt get any better.

Any idea?
Here is a pic of the plant.
I planted 2 little aloe vera in a big pot as you can see. 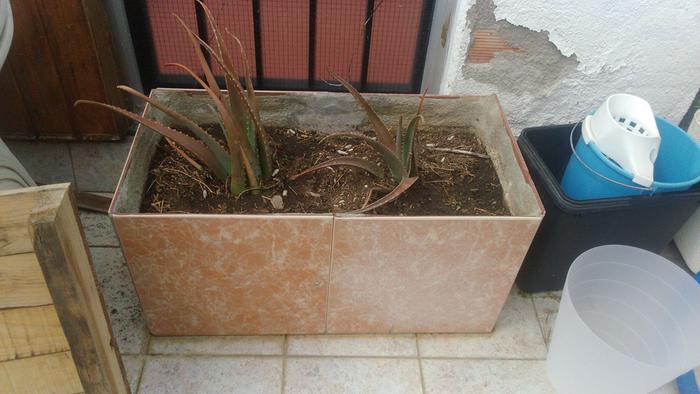 posted 3 years ago
Those aloes look fine. put them in full sun and give them a cup of water once a week.
If you continue to water them every day you will kill them.

Ronaldo Montoya wrote:It has passed 10 days and the plant still look brown, i have irrigated twice but it didnt get any better.

Any idea?
Here is a pic of the plant.
I planted 2 little aloe vera in a big pot as you can see.


I think maybe there are many types of aloe...mine look brownish like that after they've been out doors awhile after a winter inside with indirect light.  I have them in a mostly shady spot outside and they are growing out of the brown look.  I've never put them in direct sun though ...mind don't like it.   They are getting a lot of rain lately and seem to be thriving.

Henry Jabel wrote:Looks like too much direct sunlight take them out of the sun for a few days and they should turn green again.

I agree.  My aloes do best with only partial sun, only a few hours a day.  In the winter, they live under the lemon tree in the greenhouse, where they get next to no sun, and when they come out in the spring (to a shaded location) they look fine.
Marco Banks
gardener

posted 3 years ago
Ditto on the partial sun.  I grow mine in almost complete shade under a nectoplum and several apricot trees.  They thrive there.  I grow aloe vera like ginger --- dappled sunlight, lots of mulch, and I give them a generous drink about once a week.

Alexander John
Posts: 1
posted 3 weeks ago
This really helped me bring my aloe vera plant to life with DIY
https://www.meethomer.com/diy-walkthroughs/how-to-bring-your-dying-aloe-vera-plant-back-to-life