rachael hamblin
Posts: 129
posted 13 years ago
There are sugar ants living in my bedroom.  They've been coming in from under the windowsill since about January.  There is nothing, to my knowledge, in here for them to eat, and they don't seem to be after anything in particular.  Mostly they seem to wander aimlessly about and back and forth along the edge of the windowsill.  They have, however, decided to take up residence in the potted soil of the house plants on my sill...what they're doing in there, I have no idea.  They don't bite so its not really a problem but I am getting kind of tired of the scurry of ants every time I open my laptop.  Does anyone know of any ways to deter ants that doesn't involve killing them?  Or any ideas what might be attracting them?  Or ideas what on Earth they might be up to in my plants?  The plants are still quite happy so apparently they're not hurting them...
Anonymous
Posts: 0
4
posted 13 years ago
Try baby powder, sublime sulphur, bay leaves or yeast, especially combinations of the any or all of the listed. Sublime sulphur and baby powder sprinkled at entry points should work. Also try putting regular large doses of maple syrup outside well away from the house to keep the ants foraging the other directions with encouraging success. Ants are smart about efficiency though so if you forget to keep this up they will soon come to find that bottle of maple syrup in your cupboard along with a lot of other stuff you were hoping they wouldn't find out about.
paul wheaton
master steward

posted 13 years ago
Not exactly the same, but the story does focus mostly on sugar ants:  http://www.richsoil.com/antsandaphids/ 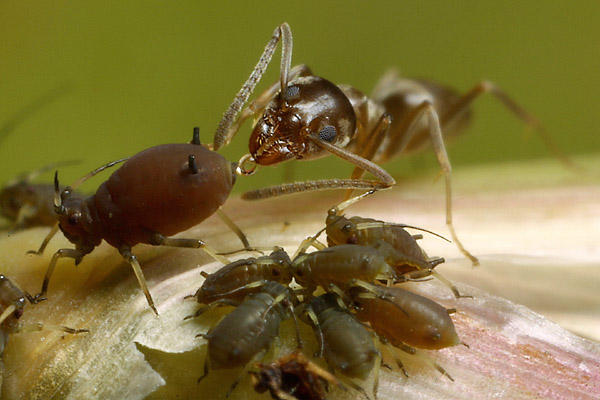 rachael hamblin
Posts: 129
posted 13 years ago
What is sublime sulphur and where would I get it?  I'd like to give the baby powder and sublime sulphur combination a try.  I have also heard that growing mint deters ants, and cayenne and oil on the holes has helped a bit.  I did promise them if they left I'd dump some sugar in the compost, maybe I should try that and see if they abandon the house for the sugar outside...beats trying to caulk the holes repeatedly with toothpaste (what I've resorted to).
paul wheaton
master steward

posted 13 years ago
For the last week I've seen some sugar ants cruising my kitchen and bathroom.

Yesterday, my son spilled something on the floor and this morning there was a bunch of sugar ants in the kithchen!  I would guess about 150.  Tiny ants.  I put down some food grade diatomaceous earth and did nothing else.  An hour later I see about five ants still moving.  I suspect in another hour there won't be one ant alive where I can see it.

rachael hamblin
Posts: 129
posted 13 years ago
So diatomaceous earth kills ants?  What if you don't put it on them but just use it to block holes?  I don't want to kill them, just deter them.

Although, since moving a mint plant to my window sill a few days ago, I haven't seen so many ants....though as I write this I've spotted one.  Still, I'm hopeful that it's somehow discouraging them.  Much better than the hundred or so earlier this week.
paul wheaton
master steward

Yes'm.  The shape of the DE particle kills critters with an exoskeleton.


What if you don't put it on them but just use it to block holes?

Then they die by touching it.  They have to walk on it a bit before it hurts them.

posted 13 years ago
Update on these ants ...

I think what is happening is that we are depleting the ants slowly.  The scouts keep dying and they keep sending out more scouts.

I suspect that in a few weeks the colony will relocate or they'll just all be dead.

rachael hamblin
Posts: 129
posted 13 years ago
I've heard that when a group of ants die, the queen just lays more eggs and there's even more ants...
It may be that since few or no scouts are coming back from your kitchen, they're starting to stop going there?

Update on my ants:  I've given up and am just crossing my fingers that they don't hurt my jade plant.
paul wheaton
master steward

posted 13 years ago
They have to feed the babies something.  If I take away their food and I'm killing their food scouts ...  I think I'm gonna win this one.

rachael hamblin
Posts: 129
posted 13 years ago
I bet your kitchen is only one of their sources of food though, or there'd be a lot more ants than 4 or 5 a day.  Good luck though.
paul wheaton
master steward

posted 13 years ago
For many days there were zero ants.  And then the boy dribbled sugar on the floor and yesterday morning there were about a dozen ants out there licking the floor.

I put down DE and about five minutes later there was only one ant left.  An hour later, not a living ant could be found.

In the afternoon, all the DE from everywhere was cleaned up and the floor was cleaned.  This morning - no ants anywhere.

In other news:  in my bathroom .... I never put DE in my bathroom, but there were some ants exploring in there.  In one corner I noticed some ant sized dots ...  on closer inspection, I noticed that these were little, dead ants covered in some web-like stuff.  A spider ate them!

One day, I was ... uh ... sitting ... in the bathroom and I saw a live ant not too far from the pile of dead ants.  So I helped the live ant find its way over there.  Out pops a daddy-long-legs, grabs the ant and starts wrapping it in web stuff.

Susan Hoke
Posts: 36
Location: Western NC
posted 13 years ago
We've had a problem with ants in the kitchen. I don't consider ants a bad insect. I don't want to kill them, just deter them. I read that putting coffee grounds around the foundation of the house will keep them out. I tried that last year & it worked! Well I stopped doing it over the Winter & didn't get enough coffee grounds out before the ants found their way in.

Anyway, I had also in the past kept my honey jar in a small bowl filled with cinnamon. This always kept the ants out of the honey. So I sprinkled some cinnamon around the baseboards & trashcan. Guess what, no ants!

"Weeds are flowers too, once you get to know them."

— Eeyore, from A. A. Milne's Winnie the Pooh

I put down DE and about five minutes later there was only one ant left.   An hour later, not a living ant could be found.

In the afternoon, all the DE from everywhere was cleaned up and the floor was cleaned.  This morning - no ants anywhere.

I think diatomaceous earth works when the ant walks thru it and picks it up on its body. When it returns to the nest, any ant who is touched by it become effected and eventually dies due to the exoskeleton deteriorating. DE is fossilized microscopic creatures - and very sharp for insects to walk over. So when one ant gets into, they share it with all their nest mates.

Glad to know there are more gentle ways to deter insects! If unwanted insects are in my house singly, I do walk them outdoors. But when appearing larger numbers, have used DE effectively for ants, fleas, and roaches. Boric acid is also a good non-toxic-to-humans approach to getting rid of ants and roaches.

"Participation is what is going to save the Human Race." Pete Seeger

posted 13 years ago
I would like to take one tiny bit of this info and shift it a wee bit ...

Boric acid is a naturally occurring substance.  While it has low toxicity, it is toxic.  I think I would far prefer using DE over boric acid any day.

I wouldn't want to use boric acid on anything I would be touching a lot, like putting it on a floor or carpet where I could be walking bare foot.

I wouldn't want to use boric acid on anything I would be touching a lot, like putting it on a floor or carpet where I could be walking bare foot.

I agree. I guess I left out an important fact - it is toxic to humans and animals if ingested!

When I was renting, had a landlord who would schedule the pest control company to come once a month and spray this white filmy poison all over my kitchen floor. Definitely not good for my kitties. I would wait until the guy would leave and then spent several hours scouring my floor and cabinets to get rid of the stuff. Finally convinced that landlord to skip my apartment... the boric acid was a welcome relief from the white filmy stinky goo from the pest control company.

"Participation is what is going to save the Human Race." Pete Seeger

Posts: 175
posted 11 years ago
I normally do not have ants except that they get in the cat's food and the dog food.

Doggies and cats do not like to compete with ants for their food.

I ordered a pack of diotomaceous earth and make a bait out of ant infested cat food and d.e.  put a lose lid over it and let the ants have at it.

Possums raid my front porch at night for left over cat food.  They eat the left over food, ants, d.e. and all.  They really don't mind eating live ants either.

Ants are good to have around because they are scavengers--the cleaner uppers.  In fact if you have them its probably a good sign that you need to upgrade your cleaning habits--or find better ways to store your pet food.

In fact I notice an add at the bottom of this page for controlling termites with ants.

Peter DeJay
Posts: 104
Location: Southern Oregon
posted 10 years ago
I agree that ants are helpful creatures, but I also don't like them in the house. I think one reason they come inside is for water. One thing that works inside the home, as it sounds like was partially discovered with the mint plant, is ants hate peppermint. I use essential oil of peppermint along their scent trail and it totally overpowers their trail. I think it will kill them if you get it on them, but if you sprinkle a few drops where they are coming in they will no longer go that way.