I am senior engineering student at Clemson University working on my Capstone design project. My team and I have been given the task of designing a Kiln that will turn a 55-gallon drum full of waste wood from a farm into charcoal for the purpose of creating a material called biochar. We are currently at the design phase where we need to determine what materials we will use to build the kiln. We need to insulate the kiln as much as possible as we also need to harness the heat energy from the kiln and convert that energy into usable electricity. The kiln will need to operate at temperatures up to 600 degrees Celsius. One huge constraint we have for our design is cost, so are there any materials out there that we could design such a kiln while operating at an economically viable rate? We are currently considering firebrick, but have noticed how expensive this material can be. Are there any suggestions that you might offer us? This design will eventually be made public knowledge in hopes of all local farmers being able to produce their own biochar to fertilize their soil at a low cost.

posted 3 years ago
I've been using a method similar to this .

Seems to be working just fine.


Maybe of some use.

John Wolfe
Posts: 4
posted 3 years ago
Appreciate the links! I wish that the trench burn idea is all that I had to propose to the farm we're working with, but unfortunately they want a much more involved design. Definitely some helpful information in those videos though! Thanks.
William Bronson
gardener

posted 3 years ago
Are you planning a tlud or a retort?
Is the 55 gallon drum part of the design,or just the volume each batch needs to be?
I have been working with Cement All from RapidSet.
It is a calcium aluminate cement available from Home Depot for about $20.00 per 50 lbs.
I make a concrete with it using Perkiness aggregate.
I add Rock wool insulation(brand name Roxul) fibers to the water for crack resistance.
Rock wool will resist any temperature you might generate,but it doesn't stand up to direct flame.


I'm not sure how well steel will deal with the conditions in a tlud if insulated,and thus unable to shed heat .

Check out the James Hookway Retort on YouTube.
His design is insulated,basically a retort wrapped around a steel "L"  rocket stove.
Loading/unloading the retort part seemed awkward from what I recall.

Good luck and keep us posted in your progress, we love this stuff 'round here!

posted 3 years ago
There is a specific biochar sub-forum here:

My initial thoughts are that your brief includes a lot of contradictory and incompatible user needs.

You need to prioritise these and work out what can and should be sacrificed. For example, I suggest that extracting electricity from such a device is going to be prohibitivly expensive and complex. Heating water, or cooking on the other hand might be straight forward.

John Wolfe
Posts: 4
posted 3 years ago
Thanks for the advice! This link goes into detail about what is expected of us in our design (http://thehappyberry.com/BioCharProject.pdf). The guy who wants this does not have anything set in stone besides that he wants some type of way to harness the energy from the kiln.

We are unsure if the TLUD or the retort would be better for our situation. We are still very early in the design process, so a lot of unknowns are still plaguing us. Also Mr. Cox, we do understand how much easier it would be to directly heat something, but I'm afraid it would not be that practical to simply heat something on his farm. I will attach other helpful information on our project if this interests you!

This is a drawing of what the man we are working with envisioned this thing to look like.
http://thehappyberry.com/BioCharDrawingNov2016.pdf

We are looking to meet a $5000 budget so it doesn't have to be dirt cheap. This is a long-term investment for his farm.
Filename: BiocharEnvironmentalStewardship.pdf
File size: 2 megabytes

posted 3 years ago
Looking at the farmers diagram,some things occurs to me:
A Thermoelectric Generator could be simpler and/or cheaper than a steam engine.

The charcoal slurry for the tractor ,I've heard of it as a  fuel for diesels.
A charcoal gasifier could be simpler,but I'm not sure it would work on a diesel engine.

A bicycle powered charcoal grinder seems unlikely to keep up with the volume generated.

Heat driven refrigeration might be a way of using the heat without turning it into electricity.
Distilled water could be marketed as "wood fired" and artisanal.

The gas from one retort can feed the fire that heats another retort,the gasses from which would feed another etc.
The point at which the flow of gasses turns from largely water vapor to something flammable is marked by a temperature change. This makes automating the diversion of gasses away from or towards a firebox relatively simple.


Eating Bindweed
Eating Buckwheat Greens
Paul explains why I spend time here,better than I could myself.

What is the payback rate? The cost per kilo watt hour (kWh) from Blue Ridge
Electric coop is 0.12 cents per kWh. The farm uses approximately 50 kWh per day
so 33 kWh would be over half the daily usage. This would be equivalent to $3.96 per
day and assuming 180 days a year it would be $712.80 per year. The payback
period on the steam generator would be 3.17 years. If the system is run 150 days it
would be $594 per year or the payback period is 3.8 years. If these number are
correct this would make the investment in the steam generator feasible.

These figures are faulty.

They assume zero labour costs on the farm - ie that prunings can be converted to saleable electricity with no time invested. This is not a realistic reflection of reality - even if the farmer does the work personally, without billing the hours, there is an opportunity cost associated with that lost time. He can't use that time for repairing fences, pruning bushes, marketing etc... which are are all far more valuable than the quoted figures. From direct personal experience, dealing with woody prunings - especially when they need to be carefully trimmed by hand to fit some small burner size - is far more time consuming than you would think. Expect at least an hour to trim stems to tightly pack a 55 gal drum. After the 20th drum I'd be hunting for an alternative.

On top of that you need collect all these stems in from the fields to a central location - labour costs, vehicles etc...

A shredder would process these stems down to chips fairly quickly to pack in a drum; but if you are shredding them then you can totally forgo the biochar making process. Simply shredding them in the field and distributing them around the plants would be far more time and energy efficient.


Time considerations - It takes about 20 to 30 minutes to load 55 gallon drum
with branches.

maybe - I'd quibble with that a bit, but it would depend on your feed stock.


What would be the typical run time for a single barrel from load up to cool
down?... so the system could reloaded. 24 hours?
It takes about 3 months man hours working 6 days a week to do the pruning. And
currently takes about 10 day man hours to haul branches to the nearest woods. This
might increase as we would be taking them all to one spot.

How about a proposal that reduced the man hours needed to haul branches away, instead of increasing them? A method of making large batches of biochar on site instead of hauling branches a considerable distance, then needing to haul biochar back again?


If the project is feasible
perhaps a second kiln would need to be added or that may mean running virtually
every day for 6.25 months using a six day week from November to May.

Sounds to me like it is not feasible as currently envisaged.


We talk in permaculture about the problem being the solution. Personally I see your solution as being a problem - more labour costs, capital expense, complex moving parts to maintain, and very minimal cash flow in return. It is making life harder not easier. 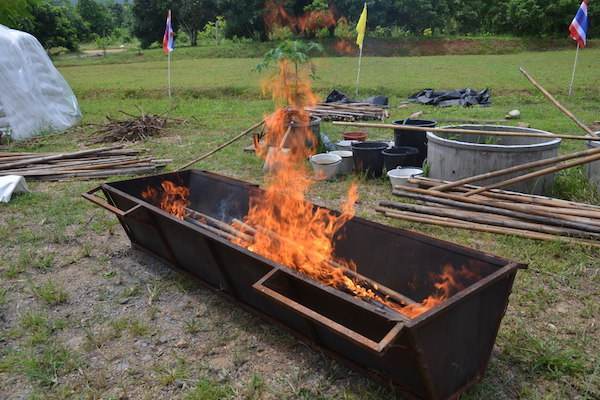 As far as using the char goes afterwards; I would simply scoop it directly from the trough with buckets and throw it down on top of the soils around the plants. Over a number of year normal soil distrurbance, leaf fall, animal activity etc will work it into the soil.