insipidtoast McCoy
Posts: 38
posted 10 years ago
Would someone please clarify the following for me?

At about 34:30 in the food forest DVD Geoff Lawton says, regarding Casuarina sp., "Fixes phosphate with a fungal relationship."

Phosphate can't be "fixed" since there is no gas form of phosphorous present in the atmosphere. Does he mean that Casuarina cunninghamiana is a dynamic accumulator?

I have not found a single scholarly article or any information from a credible source suggesting that Casuarina sp. are especially adapted to accumulate phosphorous from soils.
Burra Maluca
Mother Tree

Here's the link, followed by a diagram and a few quotes... 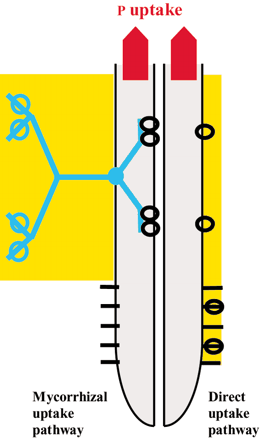 Diagrammatic representation (not to scale) of direct and mycorrhizal uptake pathways into plant roots. In the direct pathway, high-affinity plant P transporters (black circles) located in the epidermis and root hairs are involved in uptake of orthophosphate from the soil solution directly into plant cells. If the rate of uptake exceeds the rate of diffusion of P in the soil solution, the concentration of P is reduced leading to 1- to 2-mm zones of depletion (narrow yellow band) close to the root surfaces, which limit the rate of uptake. The mycorrhizal pathway involves uptake of P from the soil solution by AM fungal transporters (blue circles) located in external hyphae. P is then translocated rapidly over considerable distances (1-15 cm) and is delivered to fungus-plant interfaces in the root cortex. Plant P transporters located at these interfaces (black circles) absorb P into root cortical cells.


It seems that there's a fair bit truth behind what Lawton is saying, but his terminology isn't perfect.  'Supply' rather than 'fix' makes a big difference to a scientist, but probably not so much to a gardener.  Also, it seems that maybe the emphasis should be more on the fungus, not the plant.  Though maybe not all plants have the right sort of fungus associated with them.

I do think that permaculture sometimes gets ignored by scientists because the exact stuff that's said doesn't hold up to scrutiny, but if they can get behind the words and figure out the truth behind them, it's often spot on.

It reminds me a bit of the great long discussion about Rocket Stoves - those that know them say they are more efficient and use an eighth of the fuel, those that know science say that it's impossible to be that efficient.  Eventually it worked out that they *do* use about an eighth, but the use of the word 'efficient' was switched to 'effective'.

A lot of people like 'debunking' science.  I'm the opposite - I like, er, 're-bunking' or 'finding the grain of truth' behind apparently un-scientific stuff.

And here's another link, for those of us that don't like anything that looks too much like a scientific paper...

I think the phosphate-Casuarina link may be difficult to find directly as it is mediated by fungi (Glomus spp., etc.).  But Glomus-etc. is known to make phosphorous available, and Casuarina is a known host of Glomus-etc. Not sure what the pounds/acre figures are for that relationship.

Posts: 856
Location: South Puget Sound, Salish Sea, Cascadia, North America
15
posted 10 years ago
If I recollect... Phosphate (free floating soluble PO4) tends to bond to iron and aluminum compounds, and in humic complexes and become lost to foraging plants, and that Fungi are better at foraging, both in pulling phosphorus out of woody pools, where fungi are uniquely suited to forage, and in pulling phosphorus off of mineral surfaces (if present in your parent material).  The fungal symbiont thereby becomes an extension of the plant root systems (illustrated above) and increases both the realized foraging area and the sources available for phosphorus capture.

So fungi keeps the juggling going, by reaching in and pulling new Phosphorus that had fallen into deep storage, and bringing it into the relatively rapid cycling of fine organic matter pools.

Scientists invent funky new words to describe their concepts all the time. I think the idea that there are fixed definitions and uses of words in ecological science may be inaccurate and unnecessarily precise.

I think a person can express their position without having to take a baseball bat to somebody else.   Those that are not capable of doing that, need to move on.

And if people wish to question the way I manage this site, that really needs to be taken up in the tinkering forum.

"Phosphate fixation and the response of maize to fertilizer phosphate in Kenyan soils"
https://library.wur.nl/isric/fulltext/isricu_i16437_001.pdf

4.1 CONCEPT OF P FIXATION IN LITERATURE
Since, in soil fertility and soil chemistry, the concept 'phosphate fixation' has been approached in different ways, the term phosphate fixation has been given diverse meanings and is therefore an ambiguous term.
In soil fertility, P fixation is generally interpreted as the process in which easily-soluble fertilizer phosphates are transformed into such insoluble forms that their uptake by plants is hindered or even blocked. Slight increases of available P, low recoveries of fertilizer P and small initial and rapidly-declining residual yield responses are characteristic phenomena for the occurrence of fertilizer P fixation in a soil.
In soil chemistry, P fixation has often been interpreted as the process in which P present in liquid form is almost irreversibly adsorbed by or precipitated on solid soil constituents (Sanchez and Uehara, 1980). Part of the precipitated and adsorbed P dissolves and is desor-bed, respectively, when the soil solution is depleted of P or when it is displaced by a solution that is free of P or otherwise differs in ionic composition. This portion of the soil P is readily available to plants and is designated by terms such as extractable P, exchangeable P, reversible P, labile P and available P. The other part of the soil P will dissolve or be desorbed only at a very slow rate, and it is assumed that this part is not readily available to plants. This rather insoluble part is designated by terms such as non-extractable P, non-exchangeable P, irreversible P, non-labile P, unavailable P, stable P, occluded P and fixed P.