Shalom Eigenheimer
Posts: 61
Location: Down the road and around the bend, Southern Ohio, Zone 6a/6b
4
posted 3 years ago
Shelf? Polypore? New to this and trying to learn.

Fungus growing up snag at the border of where I intend to redevelop an old path, currently a deer trail.

Is it turkey tail?

Shalom Eigenheimer
Posts: 61
Location: Down the road and around the bend, Southern Ohio, Zone 6a/6b
4
posted 3 years ago
The top has a sort of velvety feel to it.

There is a stem but it is embedded in the wood. The tree-side of the cap is compacted and clings to the bark and moss.

posted 3 years ago
Hi, I'm not an expert, but you could check it against the specs of a mossy maze polypore, but I'm not certain that it fits all the criteria. Definitely doesn't look like TT to me. The underside of a TT is in the attached photo, more like little pores instead of teeth. http://www.mushroomexpert.com/index.html has a lot of good information that might help you id it. Good luck
Turkey-tail-underside.jpg 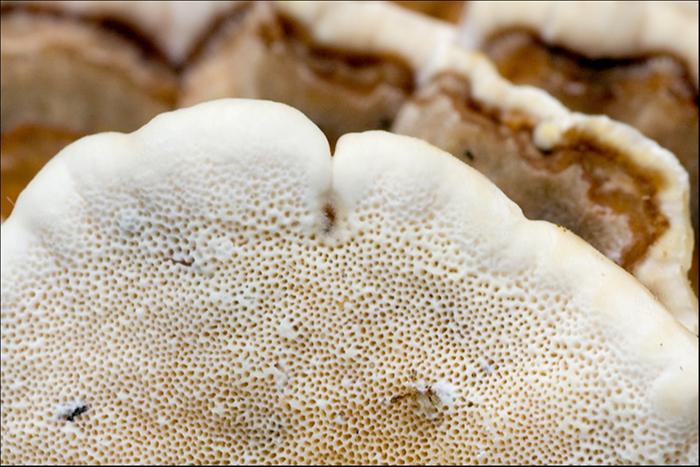 
Like the "turkey tail," Trametes versicolor, this little polypore is densely hairy, and feels fuzzy if you rub it with the pad of your thumb. Unlike the true turkey tail, however, Trametes villosa is zoned with shades of gray and buff--and its pore surface is composed of fairly large pores (for a Trametes)  1-3 pores per millimeter, By maturity the pores often become angular and irregular, or nearly tooth-like and reminiscent of the "dentate" pores of Trichaptum biforme. The large, angular pores help to separate Trametes villosa from Trametes hirsuta, which is often white and gray but has tiny (3 or more per mm) pores that do not become tooth-like.