Ken W Wilson
pollinator
Posts: 1159
Location: Nevada, Mo 64772
99
posted 3 years ago
CWD has been found in deer around 50 miles from where I live and about 80 miles from where I usually hunt.  The infection rate in Missouri is pretty low. I believe about 1 in 1800 if I understood correctly. I believe almost all the testing was done in the highest risk areas of MO.  I know it's a much higher rate in some other states.  It's a scary disease. I was wondering if people in the more infected areas are still hunting and eating deer? Are you getting them tested? Is the test accurate?

It seems like if it could have infected people, it would have by now.  I guess the latest tests on monkeys show they can be infected.
Tj Jefferson
pollinator
Posts: 1327
Location: Virginia USDA 7a/b
314
I like...

posted 3 years ago
It has changed the way I butcher deer. I butcher head down, with the last cut being the neck. I do not use the brain. The blade used on the neck is carefully cleaned. I do not violate the spine except to split the hind quarters/sacrum with a downward cut after the CSF is drained.

The precaution is probably overkill but yeah, why risk it. This precludes making "chops" and I lose some meat close to the spine, but it all goes in the garden anyhow. I use Paul's hated wood chipper and make it into bone meal that gets integrated in mulch.

posted 3 years ago
As I mentioned in another topic, we have only seen one though the biologist didn't think it had wasting disease.  So far we are still eating venison.  We don't use any organ meat and most meat is taken off the bone.


It’s caused not by a virus or bacterium, but a deformed protein called a prion.

When ingested, prions force normal proteins in the animal’s body to become deformed as well. Over the course of months, prions can gradually wreck the animal’s nervous system, ultimately killing it.

This year is the 50th anniversary of the discovery of chronic wasting disease.  ...

So far, there have not been any documented cases in which people got sick from eating meat from sick animals. “That doesn’t mean it won’t happen,” Dr. Zabel warned.

Edited: To correct "Article Photo' with two I found on the internet!  The article has a better photo than these. 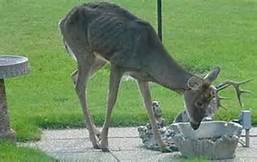 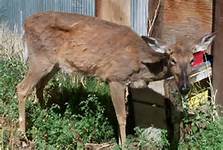 posted 3 years ago
When you say Chronic Wasting Disease, I'm assuming that you are referring to hemorrhagic disease. We have had several severe rounds of that here in Virginia in the past two decades.

As venison is one of our staple foods, I have certainly been concerned. However, I have seen this disease at it's highest outbreaks and beyond with no human effects that I can report. I am in a very active hunting area and we usually take an average of four deer annually ourselves.

We live close to our towns water reservoir and the outbreak of (either 2002 or 2005, can't recall which) was the worst I have seen it; dead deer floating in and all around the town's reservoir. The fever sends them in search of water, but that's where they expire. The neighborhood stench was awful.

This information from the Dept. of Game and Inland Fisheries website may explain better than I: link here

posted 3 years ago
You are absolutely correct. Two separate diseases. The Dept. of Game and Inland Fisheries website has a page on it as well (link). As someone who does not eat organ meat, I hope this will not be something of concern for myself, but I will pass caution to others who may. Thank you for pointing out the difference.

posted 2 years ago
Most states fish and game departments offer testing to hunters so they can find out if their harvested deer is infected. This offered tests also helps the state fish and game determine the spread of the disease. Here in Arkansas the test is free.

Ken W Wilson
pollinator
Posts: 1159
Location: Nevada, Mo 64772
99
posted 2 years ago
In Missouri, I think you have to be in a county where the disease has already been found. I’m 1-2 counties away depending on where I hunt. I’m going to double check that. There are places you can mail samples for around 40.00.

I usually use a commercial processor because I don’t have a grinder or know how to make summer sausage.  They don’t keep the burger or summer sausage meat seperate from other animals. This must increase the risk of contaminated meat tremendously. I think next year I’ll be prepared to process them myself, especially if any infected animals are found closer.

I’ve read that some areas have 40 percent infection rates and they aren’t doing much testing. It seems like if people could get it, they would have by now, also cows and coyotes don’t seem to get it. Still, it’s such a horrible disease, it seems like taking some precautions are worthwhile.
Tom Worley
Posts: 51
Location: Ozark Border
15
I like...

posted 2 years ago
If you're in Missouri and within one of the mandatory testing counties, the state will pay for testing.  If you're outside the mandatory testing counties you can still have your deer tested, just on your own dime.  Contact your local Missouri Department of Conservation office and they'll provide instructions on how to take a sample and where to send it.

It's a pretty scary disease, but still extremely rare in the state.  As TJ said you're golden so long as brain tissue and spinal fluid isn't contaminating your meat.  There are a few extra precautions, but it shouldn't stop you from eating venison.
Jen Rose
Posts: 17
2
posted 2 years ago
It’s easy to perpetuate fear surrounding disease

Don’t settle for reading articles in a magazine or even Wikipedia. As I just dug up, even the ‘facts’ derived from published studies are presented in misleading ways. Read the publications themselves.

CWD in cervids stays amongst cervids. No point in cherry picking your meat cuts. The disease spreads through the entire body including meat. Carnivores ingest contaminated meat and miscellaneous and actually might aid in spreading the disease through inoculated matter in feces. No record or evidence suggests eating meat or body parts can transmit to non cervids.   Except!  Here’s the hullabaloo. In an isolated controlled lab attempt, a squirrel monkey was infected via oral transmission. Follow up studies on primates more closely related to humans showed a species barrier to the disease.  Thats about as scary and dangerous as it gets. It doesn’t even spread laterally to cows and goats. And deer CWD doesn’t spread to elk!

Other species have been infected, yes, but by invasive inorganic injection into the brain. Which will never happen in nature.

Nor can handling a dead bat give you rabies. Unless of course it’s within minutes of death and you intentionally inject the fresh saliva into your blood stream.

Nor is every ordinary puncture wound at risk of developing tetanus.  Your body isn’t magically inoculated with the bacteria.  The bacteria must be on the puncturing material itself and a host of special conditions in the wound must follow for it to flourish.

Don’t play into scare tactics. Educate yourself on the reality, transmission, and lifecycle of a disease by reading the actual case study evidence.