This is a video from the maker Naomi Wu. She was recently featured on the cover of Make: Magazine. In this video she takes a walk in an electronics market in Shenzhen. She walks funny because she wears shoes with very tall heels (and she's got a very big boob job too and I guess one would walk funny all set up like that). She got in trouble not too long ago because she doxed some guy from Make. Doxing is when you publish private info about someone on the web. She did it in a YouTube video by displaying that info in screens she had embedded in her boots.

Shenzhen has the greatest electronics markets in the world, in fact most electronics come from there.  It's an amazing city, a growing megalopolis as far removed from permaculture as I can imagine. I have trouble wrapping my head around the idea of a megalopolis... the population density of New Brunswick is around 10.5 people per km. I often get the impression from people that they think humans are somewhat outside nature and what they do is un-natural. How can that be possible? Shenzhen is nature at work and it's beautiful too. At least in my eyes.

Of course the story has a dark side. The growing city has displaced millions of peasants and gobbled up lots of land. In this article from The Guardian there is this image with the caption:
"Children play among the wreckage of houses in Xian village, a slum area in downtown Guangzhou. Photograph: Tyrone Siu/Reuters" 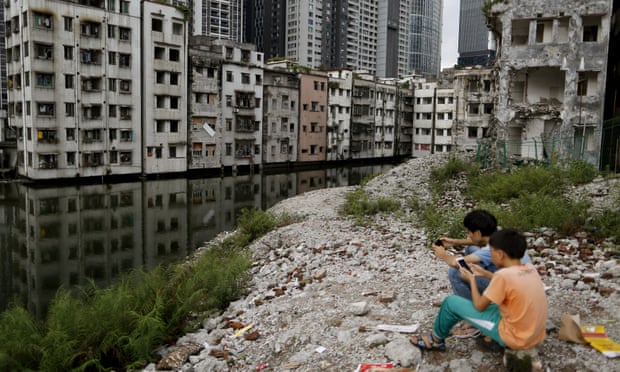 It's funny (sad depending on your temperament) that the photo shows two boys "playing", on their phones. Growing up in my time was often boring but now I fear it's 100x worse. I wonder what life is like in the slums of Guangzhou.

Naomi Wu also has videos about automatic cooking robots and automated convenience stores. The world is a strange place.