posted 2 years ago
This is the question my husband posed as we were surveying our sainfoin field. We have many, many fire ant hills. Walmart also has contender peach trees for $13. I happen to know contender peaches grow well here, I already have several doing well in the swales and kraters.

So, the experiment has begun. I picked an ant hill close to a water source simply so we didn't have to wait for rain to kill the ants.

I am killing the ants with cheap coffee ala the suggestion I received in a different thread from Bryant Redhawk.

So I am impatient, it's a downfall. I dug the hole, planted the tree, spread the coffee around and set the water.

A smarter person probably would have tried to kill the ants with the coffee first.

I'm interested to see what the coffee does to my tree.
IMG_5687.JPG 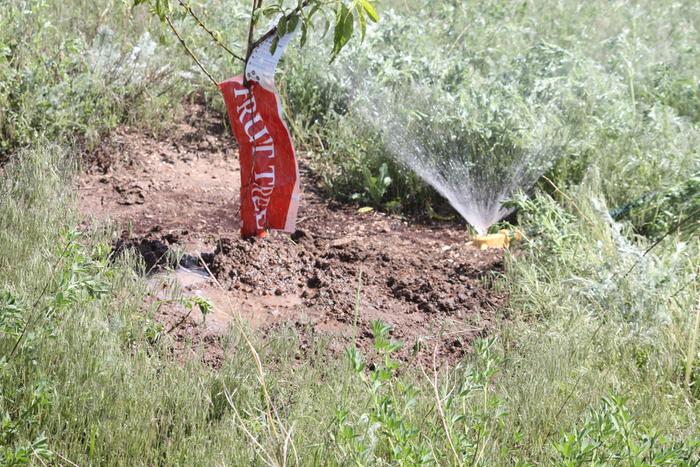 posted 2 years ago
So I know the ants kill everything around the hill because they dig up all the roots. In this way I figure they absolutely have to die. Would provide really great aerated soil though.

I am guessing an ant hill would be pretty nutrition filled.

Downside, tree planting at the whim of ants.

posted 2 years ago
I do have several other $13 walmart trees I can use as the control group.

Here is an older thread about the same concept. I need to remember this next winter.  There's still a couple trees needed in my backyard.
Miles Flansburg
pollinator
Posts: 4665
Location: Zones 2-4 Wyoming and 4-5 Colorado
462
I like...

posted 2 years ago
Looking forward to seeing how this experiment turns out elle! Keep us up to date.

posted 2 years ago
The initial experiment we did with cheap, fresh coffee grounds was on three fire ant hills, the hills were covered as well as a 3 foot circle distance.
Results were: after one watering, some ants were still present but the numbers were significantly reduced, determined by how many responded to a nest disturbance.
At the end of one week (with three rain events in four days) no ants were found to emerge from a nest disturbance, The nest was then dug up and no ants were found alive in the nest or immediate area.
The experiment was repeated on three more hills, the grounds were watered once a day for three days, at the end of the week, there were no ants alive in any of these mounds, thus proving the method was valid for removal of fire ants.

The soil nitrogen levels went up 20 percent, the P levels went up 1.5 %, the soil had earth worms come into these areas where as before there were none within 2m of a mound.

Elle, I would recommend using the coffee grounds prior to planting, not only to prevent being swarmed by fire ants but also to allow the acids found in coffee to become used up in chemical reactions with the minerals in the soil.
By doing this, there should be more mineral compounds for the microorganisms to access and break down, plus if you add fungi, they will survive at a higher rate and that means more fungi around your tree roots.

Nutrition in an ant hill would be dependent upon their food sources (fire ants eat mostly other insects) and how much resources were left behind.

Since earth worms will come to gobble up the bacteria and other organisms coffee grounds bring to the party, there will be castings made available to the tree roots.