Part one of a two-part podcast by Paul Wheaton and Julia Winter, a permies follower and Pediatrician by day who is visiting Wheaton Labs to participate in the Schmoozaroo. Paul and Julia will be discussing the movie Gracie's Backyard and how difficult it is to actually be around Paul in person.

They start with a short discussion of what Wheaton Labs was like in the very early days and the progress that has been made since the start of Paul's dream of World Domination and working community and how it compares to the vision of the Kickstarter documentary "Gracie's Backyard".

"Gracie's Backyard" is a documentary about Richard Perkin's Ridgedale Permaculture Farm in Sweden, by  filmmaker  Olivier Asselin, who also created the film "The Permaculture Orchard:  Beyond Organic".  The discussion starts with an overview of some of Paul's three pages of notes, including growing things in rows, the advantages of no till, Paul's vision of ideal food systems and an exploration of some of the people who inhabit and work on the Ridgedale farm.

The discussion takes a sharp turn into comparing Missoula and Portland and the social environments and goes into  depth about the World Naked Bike Ride in Portland before they bring it back around to the farmland and environment found at Ridgedale Permaculture Farm, including the animals, processes used to manage the livestock, interns and how many people are on the farm and the roles they fulfil.

After an interlude to digress about what can be done during winter and the challenges a farm faces the discussion returns to the market garden processes at Ridgedale and some observations about processes that are of a concern in the farm setup and moving on to egg safety, No dig/no till farming, gnarly carrots and makeup.

To be continued in part 2.

Help support the empire and get all of the podcasts in a bundle here in the digital market at permies.

This podcast was made possible thanks to:

I feel I have decent insight in both Paul Wheatons permaculture perspective and Richard Perkins perspective as I have listened to all the podcasts and been the Navigator on the permaculture roadtrip - the symphonies of seeds and soil tour of 2012 - with Paul Wheaton, Jocelyn Campell and Captain Badknock. Also I have been an intern at Ridgedale Permaculture farm in 2016.

Firstly: There was a discussion about how old this site could be at the time of the filming and four, five, six and ten years was mentioned. The correct age is 2.5 years. What you see in the film is the result of 2.5 years, and that is nothing short of mindblowing.

Secondly: I believe I heard Paul Wheaton say his place is better than Ridgedale. What is better, I ask then. Ethically?

In order to be sustainable it also needs to be economically sustainable and I know of no place in the world where they have a better balance of ecological and economical sustainabillity, when you look at the bigger picture and say "ok, people are going to eat chicken anyway so why not produce it better than anywhere else and pay down our mortgage on the farm in five years". The broilers and the egg layers contribute heavily to the improvement of pastures with their scratching and deposits of manure from the industrial feed they get. When Paul says "better" I believe he means better according to his ethical values. But in the real world farmers has bills to pay in order to keep their farm, and Ridgedale Permaculture Farm is a fantastic example on how you can create a white collar income from permaculture farming. The ethics are still there, but the reality of economy is taken into account by using the Holostic Managment decision framework of context. One way Ridgedale could be labelled better ethically than Wheoton Labs would be the impact possible through farmers seeing it can be done. No farmers will look to Wheaton Labs in at least twenty years, that's a site for homesteaders.

Another aspect is the contribution to forward velocity and momentum that comes when people see the result so clearly. I think it is a honorable route Paul Wheaton has chosen, but I do believe his goals could be reached faster by being pragmatic in the beginning in regards of giving the people what they recognize, want and expect from a permaculture site while also working on the long term goals. Bread and circus.

I have to leave the office now, it's camping time. But first I want to share the link to the Diego Footer podcast where he interviews Richard Perkins. Building a Profitable Permaculture Farm with Richard Perkins of Ridgedale Permaculture (V225). That podcast is awesome. Now when googling for the link I found this recently published podcast as well, I haven't heard it but I bet it's awesome: https://www.youtube.com/watch?v=FJpWyKr49mA

Other than that I want to share the design overview from Ridgedale, where the bottom one is a 3d rendition - hint of how it is expected to look in the future: 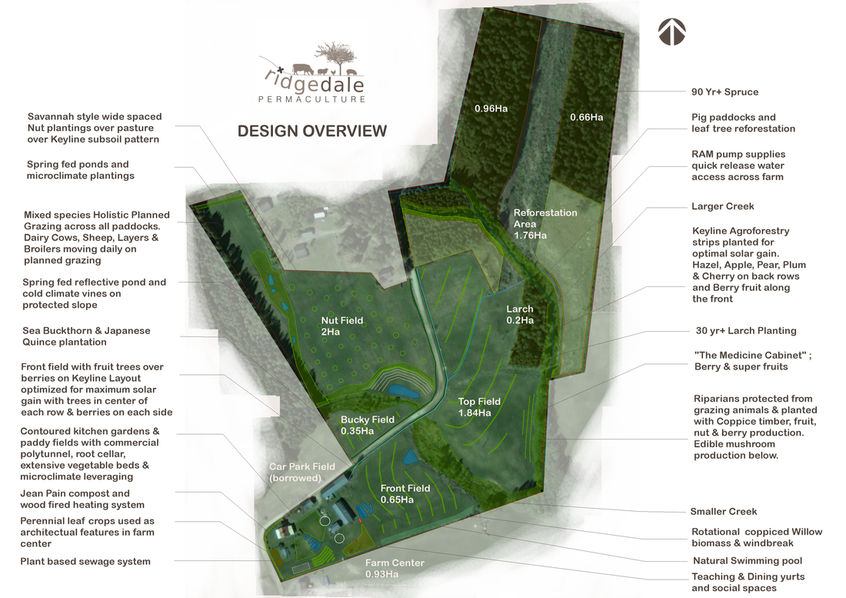 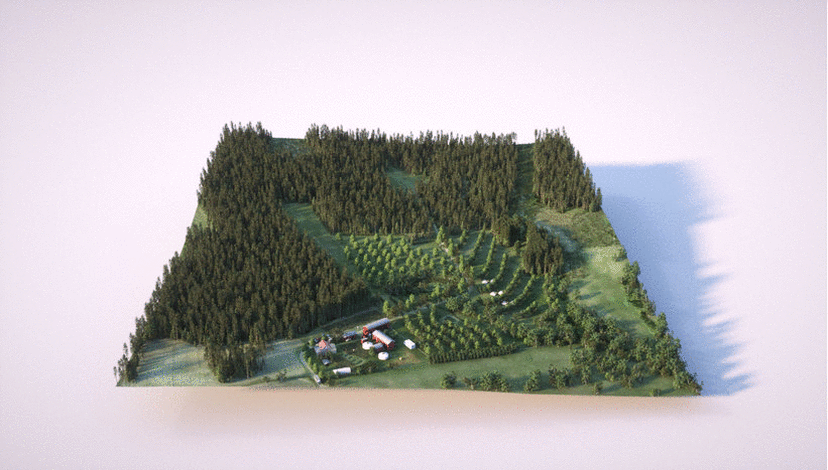 posted 1 year ago
The full movie is now available in the digital market: