What's wrong with my daughter's Orcas Pear and my Orcas prune? Black/brown spots on leaves

posted 2 years ago
Last year, we planted both an Orcas Prune and an Orcas Pear. The pear was specially planted as my daughters birthday tree (I planted an apple on my son's first birthday, and the orcas pear on my daughter's first birthday). But, the trees look sad, especially the Orcas prune. The orcas pear has only grown may 8 inches this year, and it really has never looked too healthy. I REALLY don't want my daughter's tree to die!


I've amended the pear with coffee grounds, prenatal vitamins, duck bedding, comfery leaves, meat and yogurt scraps burred two feet away, as well as bone meal and oyster mushroom slurry. The strawberries and comfery are doing great. The green onions aren't doing the best, but they're hanging on. The area is VERY deeply mulched with woodchips, which had sat for 6-8 months before I planted. The woodchips were there to smother some salmonberries that were growing there previously. This meant the Here's the tree when we planted. 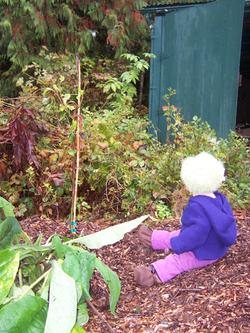 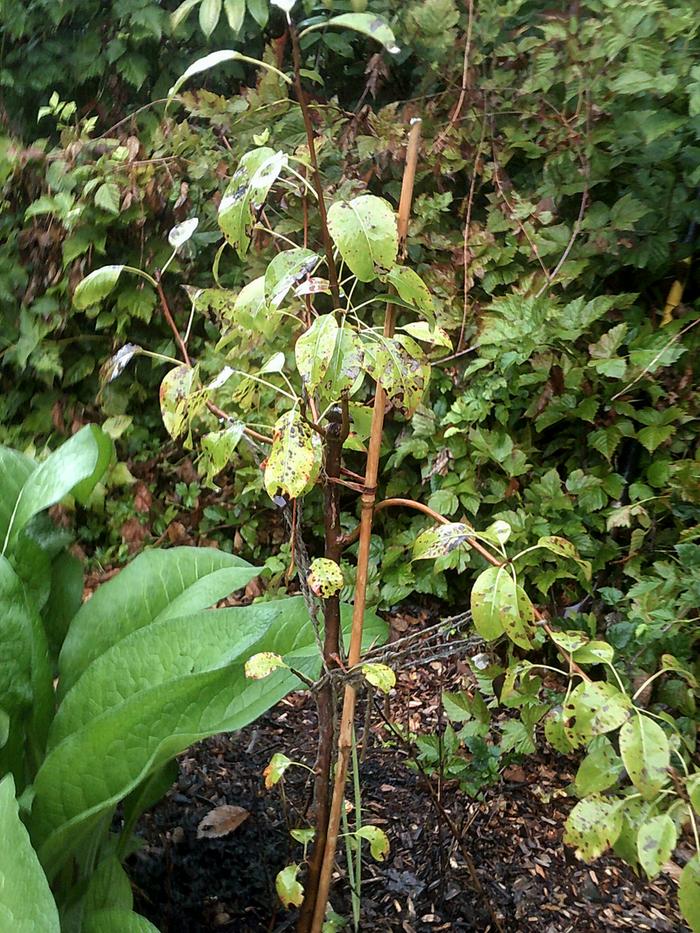 And here's a close up of the sad-looking leaves: 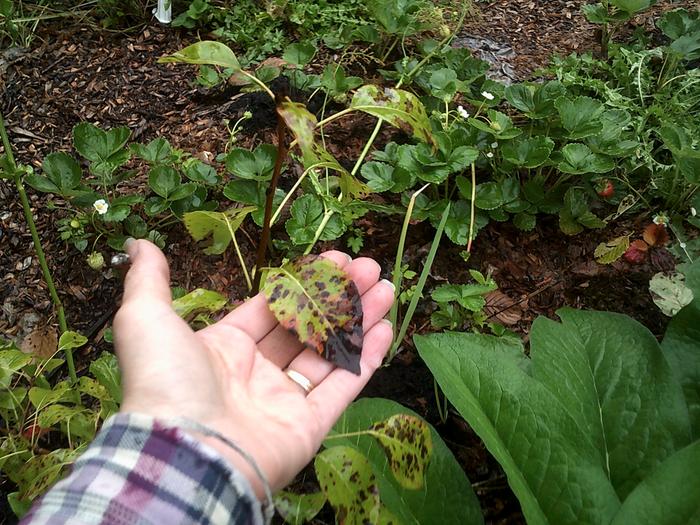 The prune tree is in MUCH worse shape, I think. It's leaves are now transparent and mostly brown, with holes where some of the brown/black spots were. I amended the prune with meat scraps, oyster mushrooms, bone meal, and duck bedding. Everything other than the prune tree is flourishing. There's wild and domestic strawberries and sweet cicily, and they all really healthy. This area did used to have an apple tree that died there, due to getting knocked over by the snow. I planted the prune about a foot from the apple, and figured there wouldn't be any problems since they're two separate families of fruit trees. 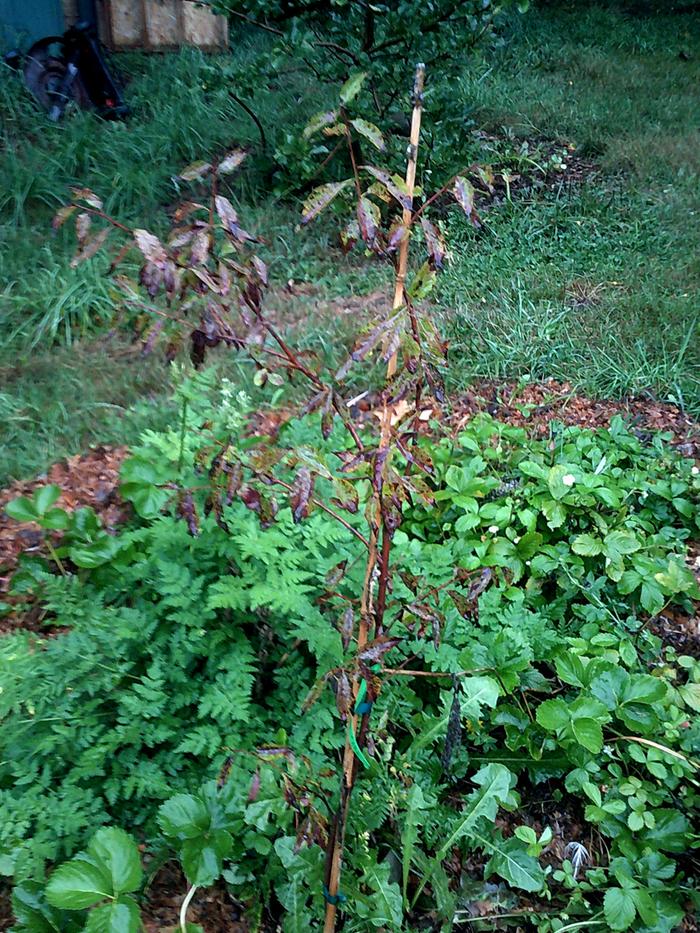 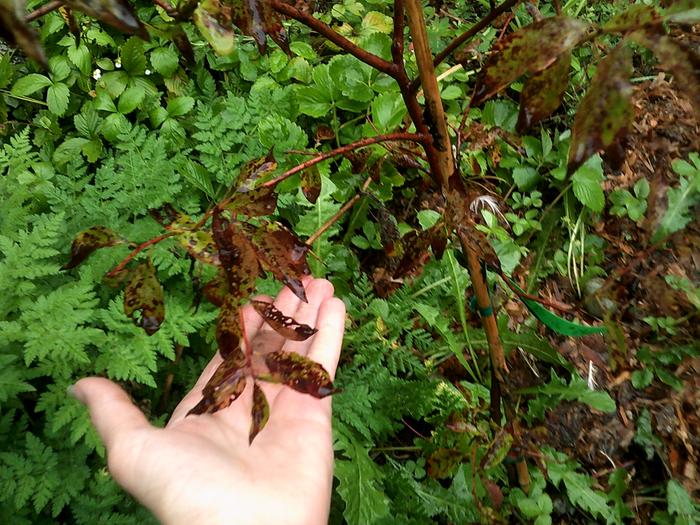 Anyone know what's wrong with the pear and prune? Is it the same thing? The other tree I ordered from the same nursery was a Sochi tea tree, and died over the winter. I figured at the time that it was due to the cold, but maybe it was related to what's going on with the prune and plum?

posted 2 years ago
Hey Nicole I think what you have there is a fungal infection called scab. It unfortunately likes cool wet conditions such as the pacific northwest :( It does tend to overwinter on dead infected leaves laying about on the ground. One good way to lower the chance of infection next year is to rake away the leaves this fall and burn them to kill the fungal spores.

posted 2 years ago
I'm not sure if it work on this particular disease, but people around here spray their trees with copper in the fall and winter to avoid certain fungal things on their fruit trees. I don't because it costs money, doesn't seem very natural, and I've heard that it can deaden the fungi in the soil around the tree (since its function is to be anti fungal in its topical application, this makes sense).

A more natural thing that I've heard of but never tried is to spray the foliage itself with compost tea in season, because supposedly the microbes in the compost tea will eat the microbes that are causing the problems on the tree. I'm not sure if it works, but it's something to tree in future years, especially until the tree is mature. As I mentioned in my other post, once established and not stressed from being young, pear trees in western Washington seem to fend off these diseases a lot better. They still get affected on some leaves but don't get completely overwhelmed by them.

posted 2 years ago
It appears to be either scab or black spot (nearly identical fungal diseases) the best (for non-chemical treatment) thing to use is a good compost tea sprayed all over the tree and soil beneath and surrounding the trees, this will help break the cycle via a protective coating.
As has been mentioned by James Freyr, you will want to gather up all infected leaves, take them away and burn them completely.
Adding more mycorrhizae around the root systems will also help as will using sea water (mineralization of the soil) to water with once a month for a few months.

I would also remove as much of the mulch from around the trees as is practical and dispose of that by fire too, it will harbor the fungi over the winter.

Judy Jackson
Posts: 19
2
posted 2 years ago
Would there be an advantage to adding neem oil into this process, which supposedly will trigger an immune response from the tree itself?