posted 2 years ago
I am having trouble finding non-limestone rock in my area.  The river rock and pea gravel is all limestone or has traces of it.  I cannot get any lava rock or expanded shale/clay unless i drive 4 hours.

I did find a place that has black granite.  I can get a supersack for about $170.  Much more than i will ever use but the only other choice is lava rock from the big box stores.

Is black granite a good option?  BTW I live in North Central Alabama.

posted 2 years ago
I have never used black granite and cannot answer the question on that one. A good place to find that out would likely be an aquaponics dedicated forum like backyardaquaponics.com. Run the gravel through the gambit for PH neutral testing before purchase. Vinegar test and all.

I have, however, used lava rock from the big box stores. It worked wonderfully. There are some insane amounts of minerals in lava rock that breaks down over time to feed the plants. Which is why volcanic soil is so awesome for gardening.

What I did in my old system in a 12" or so deep bed was put the bottom 2/3rd in lava rock. Then the top 1/3 in hydroton rejects I got for cheap on Amazon. It worked great as a anchor for heavy plants with the lava rock down deep and as something I could push my hands through easily for planting up top.

The downside was when pulling large plants out the roots were latched onto the rough lava rock and I had to push them back through to the bottom... which was easy. Cleaning out the bed in 5 years will be harder as well. And the lava rock came in massively large size... which meant more water was being pulled into the bed on each cycle. AKA more water level drop in the sump tank on cycles.


A few months ago after the move I found that there is a new vender on Amazon with much cheaper and near perfect hydroton that was the same price as the rejects. It has been working great. I still like the characteristics of the rejects more. They had chipped surfaces and got wet/settled faster.

I would love to have beds filled with small lava rock about the same size as the hydroton pellets. Easier to dig/plant.


It is indeed a learning curve... but... like learning to read... is well worth it. Even if you are not perfect at it at first. It takes time. 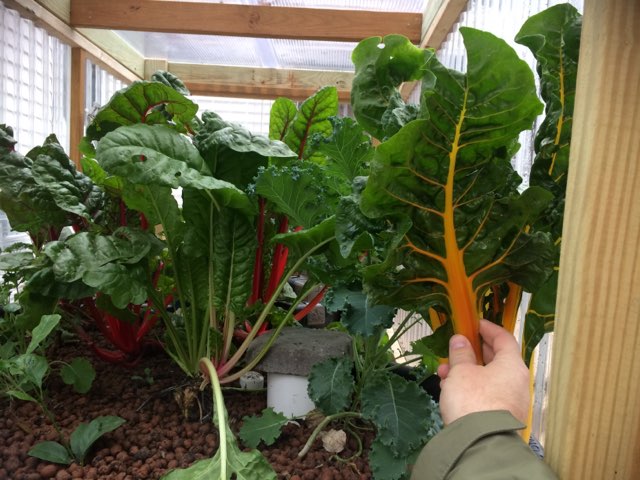 posted 2 years ago
I asked my husband (who keeps fish but doesn't do too much serious aquaponics), and he was only worried about the PH. It doesn't look like it's too hard for fish, so it should be good on that aspect.

I did some more digging

If you can get appropriately sized granite pebbles for cheap, it should be just fine for AP. The only types of rocks I usually warn against are stuff like limestone/marble that will mess with pH. Otherwise, I use the cheapest gravel I can get, around here that is the 1/2" (and smaller) brown river rock which is mostly quartz based rounded pebbles. Granite costs more down here in FL.

So I ran a ton of 12 x 12 granite samples up to Boulder Colorado to a man that had an XRF gun, looks like a hand held radar gun, spits out a list of heavy metals present in what you point it at. Yikes, lead, arsenic, cadmium, chromium, lots of uranium, and dozens more heavy metals. Everything except beryllium. Finding beryllium was the Holy Grail but my budget was limited to a hundred scans so we didn't find that one.

Amounts varied of course from small trace amounts to ore quality, as much as 1% of some heavy metals, much more for common metals like lead.

But, are there heavy metals in other volcanic rocks like lava rocks? It looks like natural lava rock is dangerous, but not man-made. Here's a quote from a saltwater fish tank forum

The reason natural lava rock is so dangerous is that it may contain heavy metals that can leach into your tank. Am I right?


in principle yes BUT .... it isn't heavy metal which is that dangerous in the long therm ... it is sulfur/sodium-sulfur and something like that; materials which solve in sea water very fast and poison the water and ALL animals.

I'm thinking that the granite might be better than the lava rock as it's denser and less prone to dissolving...

posted 2 years ago
Yes. Heavy metals can be found in all garden soils. Typically being found in higher concentrations in areas near old hwys, old orchards, or old buildings with lead based paints (etc)

"In general, plants do not absorb lead into their tissues" is one of the quotes from the read. There is a good bit of info. in there.

One of the main things to do... according to the article... is to thoroughly wash your food before consumption. Along with several other practices.

Luckily, in Aquaponics, the leafy greens and such Never have any dirt/splash on them. Greens from Aquaponics are 10x easier to clean than lettuce from soil.

Some of the trace elements found in volcanic rock are going to be heavy metals. They are in a ratio found in balance with what is natural in nature... from what I have found in past searches.

I just did some searching around and could not find the break-down tests. They are out there somewhere. I read up on all of this thoroughly before using lava rock in my system.

posted 2 years ago
Thank you for the advice and feedback.

posted 2 years ago
I think I found the big thread I had in mind!

It is titled "Is red scoria safe as a growbed media?" In Australia they usually refer to red lava rock as scoria.


I don't have time to read through the article at this time.
Marty Mitchell
pollinator
Posts: 506
Location: Elizabeth City, North Carolina - Zone 8a - Humid
83
I like...

posted 2 years ago
Thanks.  I am finding that nobody carries lava rock in quantities.  I may have to break up the size of my setup and do 1/2 at a time.