Hello from Skye
fàilte! Skye would indeed seem a challenging place to do gardening - wet, boggy, never warm in summer... A bit of shelter would seem a necessity for most plants.
I've lived in Scotland for some 15 years, have visited Skye a few times, so I can imagine what your conditions are like.
I guess I'll go reading your blog for a bit now.
show more
4 days ago
introductions

Tomatoes - help me find a taste explosion
Interesting subject! I'll certainly follow some of the recommendations being made here.

Michael, I can send you some seeds of 'Friesje', a very tasty tomato that I got from a German who got pleasantly surprised by it. I grew it for the first time this year, and I've already sent quite a few people seeds, because in my opinion this tomato is a hidden gem. Not only is the taste good, I'm also still harvesting daily from my two plants, while other tomato plants have withered away due to the weather and late blight. The tomato is a large type of cherry tomato, originally from East Friesland, which is a part of Germany, and it's also for sale there - the link includes a picture: https://www.dreschflegel-shop.de/fruchtgemuese-und-obst/tomaten/stabtomaten/salattomaten/1953/salattomate-friesje?c=103.
show more
1 month ago
gardening for beginners

Bicycle riding in the UK / Ireland
The Pennines - border area between England and Scotland - are beautiful, and easy to reach from Newcastle (North Shields), so that's an area I can definitely recommend. It's fairly empty, not many cars, and I've always found drivers in the UK very courteous.
You'll find many single track roads in the countryside. Cars will have to stay behind you if they haven't got a good view ahead of them to safely overtake you. In my experience drivers have always been very patient. You'll have to accept being on the same road as cars, as separate bicycle lanes are nearly non-existent. But then there are so few cars, the situation can't be compared to that in The Netherlands.
What I would recommend for Britain is getting a rear view mirror. Not many cyclists in flat Netherlands use one, but especially going downhill at high speed, when you want to keep your eyes on the road in front of you, you'll still want to be aware of traffic coming from behind. And of course your brakes need to be good in the hills!

Cycling with full camping gear is really tough in the hills. Whenever I saw fully packed cyclists in Scotland, having an arduous time, I tried to make out their brand of bicycle. It was usually a Dutch brand, so I knew; 'silly Dutch people'. The scenic roads you'll want to be cycling are never flat, the bigger roads will be, but they're busy roads, and not the reason you came over.
So I would try to organise your stay in a way that would allow for day trips with your bike, unpacked, instead of planning it so that you would be fully packed most of the time, because that would be really tough.
show more
2 months ago
uk and ireland

fall sown parsnips and carrots?
Probably the best approach is very climate dependent, so would differ a lot, dependent on the region where you are. I'm in zone 8, and my autumn sown carrots or parsnips would just grow during winter and bolt when summer comes. In zone 6 it'll be different; a youtube vlogger from Nova Scotia I follow sows his parsnips in November and he says they come up after winter.
I should be better with spring sowing, but then my main problem becomes another climate feature: drought. Tiny seeds have a problem germinating during the very dry springtime we have here. In autumn and winter the soil always remains moist and germination is very successful, but in spring direct sowing becomes very hard. My heavy clay soil doesn't help either. This winter was very wet, and I thought I could postpone sowing parsnips until February. Wrong; a month later still almost nothing had come up.
I knew about Bill Mollison's method of using a plank, had never tried it, but this seemed an ideal moment to give it a try. I used a small plank from a wrecked pallet, and immediately noticed the soil underneath remained moist for days on end without me having to water. Some three weeks later I saw small seedlings appearing and I could remove the plank. That's the day the picture shows, more seedlings have surfaced since, and I now need to thin. So, depending on your climate and soil, an old plank can indeed be a big help with germination.
show more
6 months ago
gardening for beginners 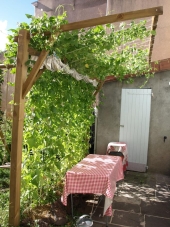 Fast growing climbing plant for sun protection
Another suggestion might be Chocolate Vine (Akebia), which also gives tasty fruit - provided you have at least 2 genetically different plants for pollination. The variety Akebia quinata turned out to be winter-green outside at my place, in a sheltered position. I've also got an Akebia pentaphylla, which isn't entirely winter-green here, but has been in leaf again since the end of March, which is way earlier than most bushes and trees at my place. So Chocolate Vine will already provide shade in spring. It's a fast grower once established, but that might go for all climbers; they need a few years to establish themselves. If you want something for this year pole beans would indeed be a good suggestion.
show more
7 months ago
plants 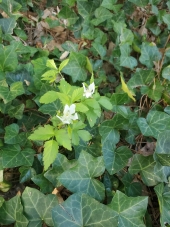 Plant ID?
I agree with Jay Angler. Possibly something like this: http://www.foragingpictures.com/plants/Blackberry/h0010.htm.
show more
7 months ago
gardening for beginners 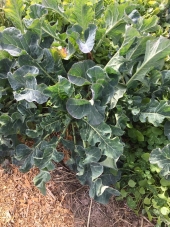 Saving Brassica seed
That last thing's Hugo Morvan said is very true. Textbooks will warn against regression from inbreeding, but natural selection should favour the strong.

You're growing Mizuna. What I find with Mizuna is that it self-seeds very happily, comparable to chard. I've let it go to flower and laid the wilted plants at different places. Sometimes the leaf structure of the offspring is a bit different, but it's all unmistakably Mizuna. It came up with me having done almost nothing; gardening couldn't be easier. But Mizuna is Brassica rapa, so the species name is rapa, meaning that it isn't compatible with, say, sprouts, because that's a Brassica oleracea. Maybe there were few other Brassica rapa plants in the vicinity. Not all Brassicas can cross with each other, they need to belong to the same species, and the species name is written behind 'Brassica'. Watching the species name probably makes this a lot easier to understand.
show more
7 months ago
seeds and breeding

Saving Brassica seed
For a few years I'm now saving my own Brussels sprouts seeds, and the resulting plants have been good so far. My Tuscany kale plants haven't always been true to type; didn't consistently grow into a palm shape, but still tasted great and like they should.

The Brassicas aren't the easiest plant family to save seeds from if you're particular. Within each species all members can cross with each other. This means that, for example, broccoli, Brussels sprouts, cauliflower and collards can all cross with each other, as they're all Brassica oleracea.
Brassicas require insects for pollination, and are often self-incompatible, meaning they require another plant, with a slightly different genetic make-up, for successful reproduction. So you cannot just cage one plant to get around the cross-pollinating problem... Also it's not a good idea to save seeds from just one plant, because of lack of genetic diversity that way - you don't want to create a genetic bottleneck. But you can always introduce different seed again somewhere down the line.

So the textbook will say Brassicas are tricky for the seed saver, but you can ask yourself how distraught you will be when your results won't exactly turn out as planned. Possibly you won't be scared by the idea of a broccoli possibly having crossed with a cauliflower... If you're not a professional catering for a market, you might have a different interpretation of the 'risks'.
show more
7 months ago
seeds and breeding

What Fruits and Vegetables Can Be Used to Sweeten Things?
The lighter the colour, the sweeter the beet, I've always found, and within the same variety already a large difference can appear.

But the veggies that immediately came to my mind are Stevia, which I'm not growing myself, but it's supposed to be really sweet, and it's around at plant nurseries where I live, and I'm also thinking of Glycyrrhiza glabra, for which I don't know an English name - Google suggests liquorice, so maybe that, I know it's an ingredient in liquorice sweets. Also that I see at nurseries where I live, not commonly, just like Stevia isn't common, but it's available here for the more devoted gardener.
show more
7 months ago
cooking
Mulching around leeks?
Sowing small seeds in the dry period, when the sun is blasting every day and also the wind does its bit, doesn't work for me. I intend to try Bill Mollisons method of using a plank over the soil until the seeds have germinated. For seeds that need to be direct-seeded like carrots and parsnips, that is. Most seeds I'm starting up in pots indoors. I suppose for beans using mulch would work fine when direct-seeding.
show more
8 months ago
plants