posted 1 year ago
Hi everyone.

So, I'd been growing parsnips for years in a conventional spring sown garden, and found I had poor germination with spring sown seed. One year I found some leftover seed in early fall and tossed it into a perennial bed in clay soils, figuring what would it hurt.

Fast forward to spring and the parsnips from that seeding came up far more successfully than they ever have from spring sowings in the garden. I'm now several years into sowing this way (actually, letting the plants self sow), and it's got me wondering if carrots, which are in the same general family if I remember correctly, might have a similar successful response. Has anyone else tried fall/out of season sowing for carrots or other root crops like beets? What has you experience been like?

Thanks in advance!
Carol Denton
pollinator
Posts: 102
Location: Central Arkansas zone 7b
50
I like...

posted 1 year ago
I recently watched a youtube from Hoss Tools where he harvested some fall planted carrots. They were planted thickly and allowed grow without any thinning. He pulled a large bunch out of the ground and there were various sizes to be used for different recipes. He made it look so easy. I love that idea because thinning tiny things is hard!
Henry Jabel
pollinator
Posts: 340
Location: Worcestershire, England
73
4
I like...

posted 1 year ago
Yes I have been doing this for a few years and it works great, broadbeans and beetroot are good too. We don't usually get a very cold winter (just wet and overcast) so most of the time the beans survive well and are flowering and producing beans way before the current years crop.

Also it avoids most of the problems with slugs if they are out in force after a wet mild winter and some things taste sweeter after a frost.

posted 1 year ago
I'll have to try that. My issue is getting enough carrots to come up to thin in the first place. I've tried seeding with radishes or mesclun mix--which in theory are supposed to serve as nurse crops to keep the soil loose so the carrots come up easily--with no better luck. It's been frustrating, because carrots and parsnips are not just flavors I love and find versatile for cooking, but they can store in the ground with nothing more than a thick leaf or straw mulch.

posted 1 year ago
If you are on clay adding some sand to soil (about 2 inches/5cm ) and incoorperating that in has made a huge difference in my heavy clay garden. Also carrot and parsnips I now sow as soon as I get the seed because they dont have a great viability if they are left too long. Hope that works for you!
Catherine Carney
Posts: 80
Location: Ohio, United States
39
I like...

posted 1 year ago
Aha! So it might be a seed viability issue, given that purchased seed is harvested and stored the year before. I wonder about the effects of cold stratification on carrot/parsnip viability as well.

Clays are challenging, and I don't think there's sand enough in the world to do much to help here. Not to mention cob and adobe are clay plus sand plus straw that's been shaped and allowed to dry (oversimplified, I know).

I'm finding that adding lots of mulch and compost (courtesy of the poultry and sheep), making raised beds, and planting deep rooted crops and trees has gone a long way to improving tilth and drainage. While it will never be a deep loam, it's come a long way from the brick clays (literally--the farmhouse down the road was built from bricks made on sight and I can make pottery with my clays) that were here initially.

Susan Wakeman
pollinator
Posts: 187
Location: Lake Geneva, Switzerland, Europe
33
posted 1 year ago
Parsnips and carrots are both umbellifers and will flower after the winter. That's what I found with autumn sown parsnips.
These flowers are great for beneficial insects, so I make sure to leave some every year. This also provides me with fresh parsnip seeds. Carrots hybridization too easily with their wild cousin, Queen Anne's Lace.

J Grouwstra
pollinator
Posts: 129
Location: Fryslân, Netherlands
53
posted 1 year ago
Probably the best approach is very climate dependent, so would differ a lot, dependent on the region where you are. I'm in zone 8, and my autumn sown carrots or parsnips would just grow during winter and bolt when summer comes. In zone 6 it'll be different; a youtube vlogger from Nova Scotia I follow sows his parsnips in November and he says they come up after winter.
I should be better with spring sowing, but then my main problem becomes another climate feature: drought. Tiny seeds have a problem germinating during the very dry springtime we have here. In autumn and winter the soil always remains moist and germination is very successful, but in spring direct sowing becomes very hard. My heavy clay soil doesn't help either. This winter was very wet, and I thought I could postpone sowing parsnips until February. Wrong; a month later still almost nothing had come up.
I knew about Bill Mollison's method of using a plank, had never tried it, but this seemed an ideal moment to give it a try. I used a small plank from a wrecked pallet, and immediately noticed the soil underneath remained moist for days on end without me having to water. Some three weeks later I saw small seedlings appearing and I could remove the plank. That's the day the picture shows, more seedlings have surfaced since, and I now need to thin. So, depending on your climate and soil, an old plank can indeed be a big help with germination.
plankje.jpg 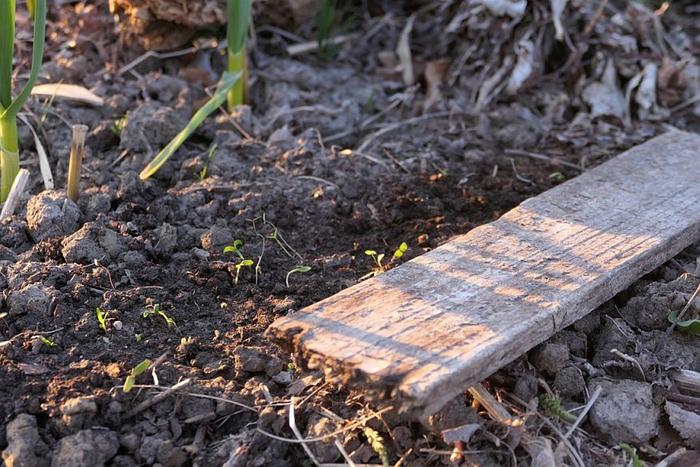 Susan Wakeman
pollinator
Posts: 187
Location: Lake Geneva, Switzerland, Europe
33
posted 1 year ago
I sow my parsnips with radish. By the time the radish are pulled, the parsnips are big enough to be mulched.

Emilie McVey
Posts: 79
Location: central Pennsylvania
10
2
posted 1 year ago
I recently watched a short video on sowing carrots with a great germination rate.  Unfortunately I don't remember who it was

But, here's what I remember from his instructions :  soak the carrot seed for 24 hours.  Then, mix corn starch with cold water, bring to a boil,  and thicken. As I recall,  he made enough to fill a gallon bag. Drain the soaked carrot seed, put in the gallon back. Add the COOLED corn starch-thickened water. Zip the bag closed, and knead the seeds around in the bag until they're pretty well distributed throughout the gelled water. Take the bag out to the prepared garden bed, snip a very small hole in the corner of the bag, and gently squeeze the seeds, like toothpaste,  in rows in the garden.  Because the seeds had soaked so long, they were up in just a few days. I'm trying that method next year!

posted 1 year ago
What a great tip! Thank you Emilie! I'll be trying it next spring.
Jesse Glessner
Posts: 122
Location: Indiana
21
posted 1 year ago
Carrots in particular need to have the seeds damp constantly for them to germinate. I like seed tapes so purchased one bag and made my own by using thin toilet paper folded to a strip about 1/2" to 3/4" wide, made some flour paste and too the end off of a Q-tip to dip paste in small spots about 2" apart then dropped 2-3 carrot seeds onto the spots, let dry, then laid out in "V" row. I then applied Seed Starter over the tapes and that seems to hold moisture very well.

Something else you might try on hard-to-start seeds is to soak them overnight in a 50/50 mixture of distilled water & hydrogen peroxide. Liquids soften the hull and the hydrogen gives the germ some added oomph to growing. This method worked very well with Gourd seeds.

Angelika Maier
pollinator
Posts: 1433
Location: cool climate, Blue Mountains, Australia
22
posted 1 year ago
Parsnip seeds are super short lived and you have to collect your own. For carrots they do need a long time to come up and need watering meanwhile and yes they hate weed competition. If you sow in autumn then in my climate it is better to sow early otherwise everything only runs to seed in spring.

I knew about Bill Mollison's method of using a plank, had never tried it, but this seemed an ideal moment to give it a try. I used a small plank from a wrecked pallet, and immediately noticed the soil underneath remained moist for days on end without me having to water. Some three weeks later I saw small seedlings appearing and I could remove the plank. That's the day the picture shows, more seedlings have surfaced since, and I now need to thin. So, depending on your climate and soil, an old plank can indeed be a big help with germination.

Loving the thread. The above is giving a whole new meaning to "planking". I like this one much better.

I've never even tried parsnips, though I remember my mother telling me she had eaten them as a child. Apparently she didn't like them as we were never served them at the dinner table. I didn't even know about turnips until I was grown with children and a girlfriend had one cut into sticks and served with salt. I love them that way, but they decidedly DO NOT like me. Then years later and another marriage, my in-laws served them in lieu of mashed potatoes at the holidays. Served that way was far less harsh to my innards than eating them raw.

When we finally move to live with my youngest on some acreage, maybe I can include a row of parsnips and turnips to the kitchen garden. Maybe I can introduce them to my grandbabies who are growing up far too fast for my tastes.

“Peace is not absence of conflict, it is the ability to handle conflict by peaceful means.” —Ronald Reagan

posted 1 year ago
I'm not a huge turnip fan but I grow them for my sheep: I grow a garden row of them specifically for my woollies for fall treats and broadcast turnip seed along with oats as a nurse crop in my pastures to give new pasture mixes some protection.

Parsnips are a favorite here for people and critters, and they have the added bonus of actually growing well in my brick clays. Not to mention their value as a nectar and pollen source for beneficial insects.

One ways I serve all of these things is as a roasted root vegetable mix (usually potatoes, parsnips, and carrots, with things like sweet potatoes, brussels sprouts, or turnips for variety. Cube your veggies, put them in a parchment paper lined shallow pan, sprinkle with seasonings of choice (salt, garlic powder, and black pepper here), cover tightly with aluminum foil and bake at 350 for 30-45 minutes....