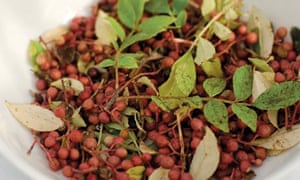 Seeds of course, but my trees are young and this is my first seed harvest.  I would love to take this chance to taste the seeds, if they ever mature.

What about cuttings?  The place where I got them propagated by cutting.  What kind of cutting would be right for this tree?  It's a good time of year for softwood cuttings, so I'll be giving that a go.  But I would also like to discover what the most successful method would be so I can try that as well.

posted 4 years ago
Ooh, I looked online for seeds of a hardy Zanthoxylum species last year, but couldn't find them anywhere. So then I planted some seeds from some spice I bought here, presumably grown in a neighboring country, so they're probably not as hardy as some I've heard of. No germination at all, though I may have done something wrong. Well, I'll be curious if you get any results.

posted 4 years ago
I read that they carry diseases that affect citrus so seeds exported for culinary use have been treated. I tried to germinate some too with zero success.
r ranson
master steward & author

cesca beamish wrote:I read that they carry diseases that affect citrus so seeds exported for culinary use have been treated. I tried to germinate some too with zero success.

plants for the future says


Propagation
Seed - best sown in a greenhouse as soon as it is ripe in the autumn. Stored seed may requires up to 3 months cold stratification, though scarification may also help[113]. Sow stored seed in a cold frame as early in the year as possible. Germination should take place in late spring, though it might take another 12 months. Prick out the seedlings into individual pots when they are large enough to handle and grow them on in a cold frame for their first winter. Plant them out in early summer. Cuttings of half-ripe wood, July/August in a frame. Root cuttings, 3cm long, planted horizontally in pots in a greenhouse. Good percentage[78]. Suckers, removed in late winter and planted into their permanent positions[113].

It seems like a lot of tree seeds want to be sewn fresh.

We took some softwood, semi-hardwood and leave cuttings today.  Looking forward to seeing if any grow.

Lance Kleckner
Posts: 123
Location: West Iowa
2
posted 4 years ago
if anything like the native prickly ash, suckers will be a good opportunity to increase them.   I don't have experience with this species yet, got my first plant this year, though already sprout seems to be coming up near the base, so looks like it may sucker like the prickly ashes that grow here.

Root cuttings would seem easier than stem for this genus.

posted 4 years ago
These are what my Szechuan peppers look like right now.  I know the fruit(?) isn't red yet, but they were popping open and tossing out their seeds, so I thought I had better pick some.

Do I eat the seed part?

Now to experiment with growing the seeds.  I'm a bit worried about growing them in the greenhouse as the temperature fluctuates quite drastically during the day in the winter.  Cold at night, hot during the day.

Of the cuttings I took, a couple seems to have taken.  I think the weather was too hot for them, so I'll have to give it another go this fall.
szechuan-peppers-fresh-from-the-tree.jpg

It's been a poor year for them with a massively nasty winter and a sudden heat wave and drought.  I was worried about them in August as I thought they looked so sad and droopy but still I didn't water them. They are looking much better now.

None of the cuttings I took last year survived.  I haven't managed to grow any from seed yet either.  going to keep trying.
szechuan-pepper-harvest.jpg 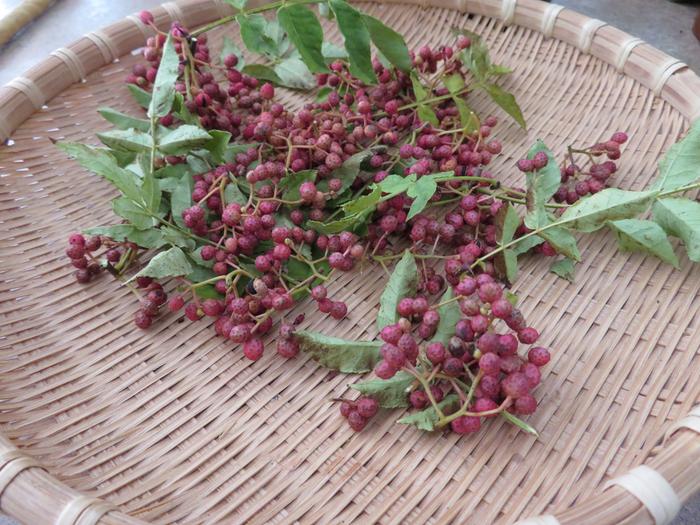 J Grouwstra
pollinator
Posts: 128
Location: Fryslân, Netherlands
53
posted 2 years ago
I planted a Szechuan pepper tree last year, but I'm still unsure about what to expect. So I'd like to ask some questions here. It's not a Zanthoxylum simulans I've got, it's a Zanthoxylum bungeanum, but that's not a huge difference in botanical characteristics, I believe.

Firstly; is it really infertile on its own, like that Plants for a Future site says, meaning that I would need at least two plants, a male and a female, to get fruit? I've heard a report of the contrary, and also I would expect the nursery where I got the plant to tell me if there was a need for cross pollination.

Then... at what stage could I expect at least flowers? At the start of this year my plant was still small, it only consisted of two branches, but it grew well, it's now some four feet high, with many branches: 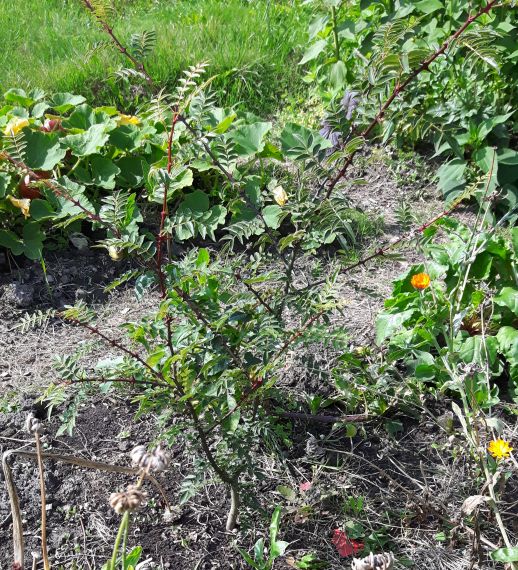 Any other experiences people may have with Zanthoxylum and would like to share I would be interested in as well, like how fast does it grow, how do you prune, do you find it a useful plant?
J Grouwstra
pollinator
Posts: 128
Location: Fryslân, Netherlands
53
posted 1 year ago
I'm getting closer to learning more about my Szechuan pepper tree. The season starts late for this species, and it looked first like there still wouldn't be any bloom this year: 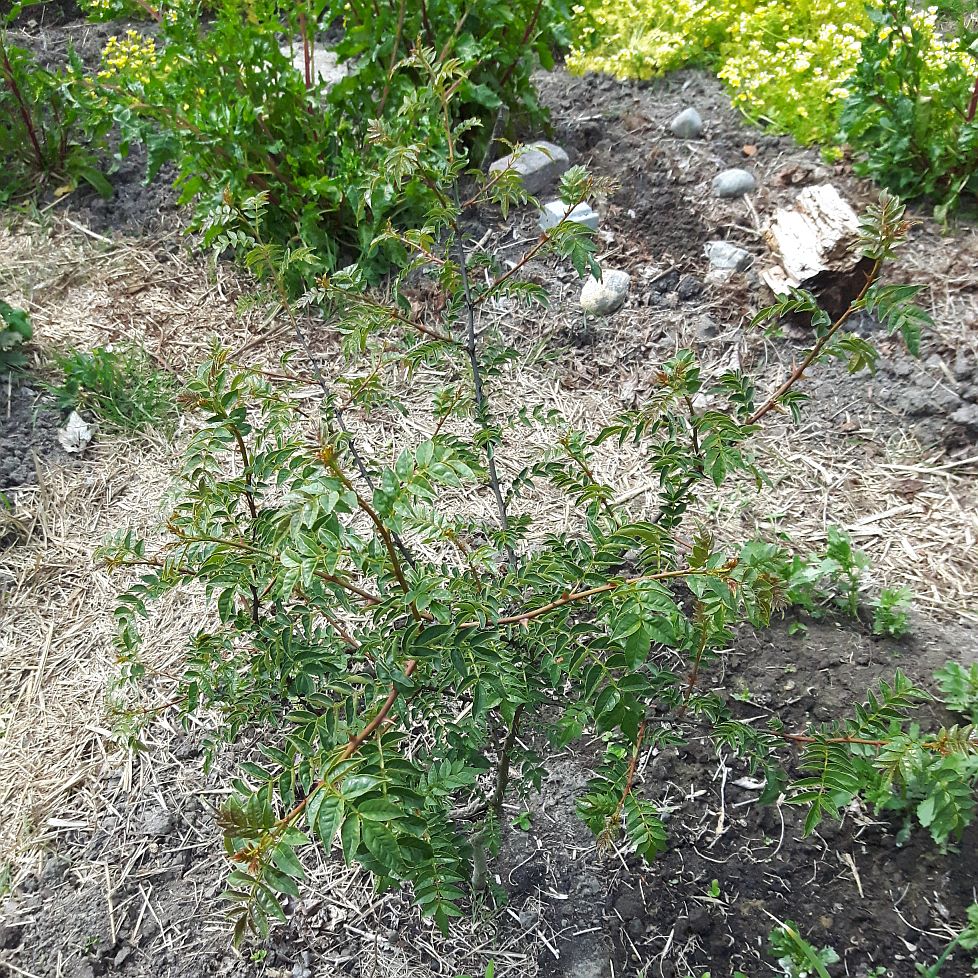 But if I'm taking a very hard look: 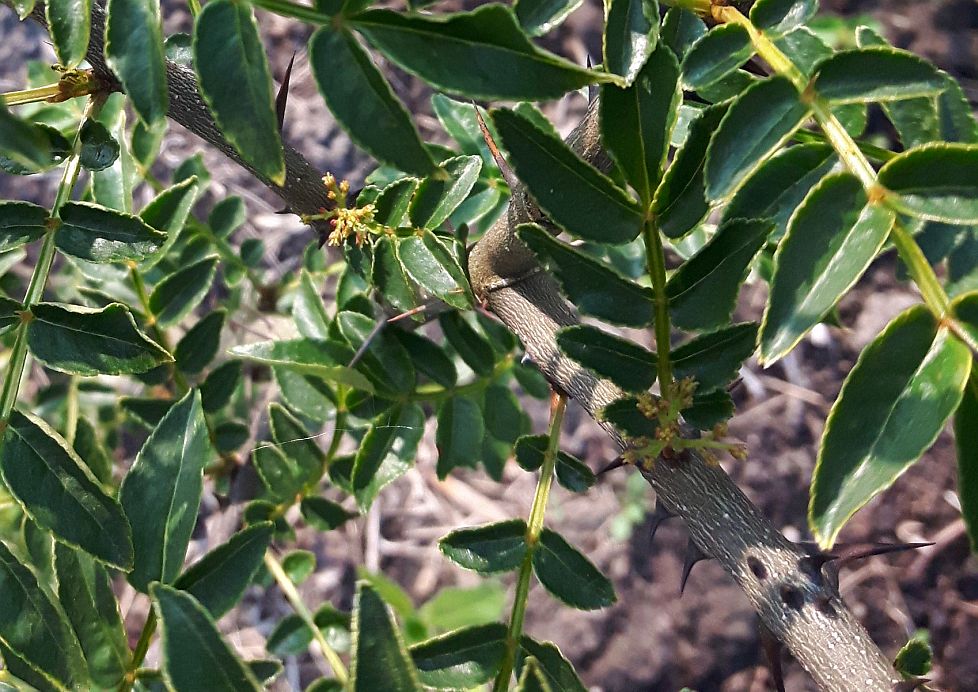 That was not easy to spot! I assume it'll continue development and get bigger. The nursery where I got the tree is assuring me it's self-pollinating, so could I get some pepper this year?