posted 1 month ago
We have a 5-6 year old rhubarb plant that produced a very tall flower stock, covered with seeds, each within a triangular casing.
I am going to collect seeds from it, but surprisingly it's hard to find information on collecting and storing rhubarb seed, as most online material seems to focus on division/propagation.

With that said, here's a few of the questions I'm wondering about:
1. Do I keep the seed in the casing or remove it once it is dry?
2. How true to the parent does rhubarb seed tend to be?
3. How long does rhubarb seed store for under good conditions?
4. Is there anything special (such as stratification or scarification) that needs to be done to the seeds before replanting?

I will upload a picture of it once weather permits.

Posts: 5682
Location: Cache Valley, zone 4b, Irrigated, 9" rain in badlands.
2256
posted 1 month ago
The rhubarb seeds that I have seen in seed packets are still encased in their triangular wings. I just planted them without any special treatment.

Logan Byrd wrote:
1. Do I keep the seed in the casing or remove it once it is dry?
Yes you can leave them in
2. How true to the parent does rhubarb seed tend to be?
Not very, but that's ok you will get hundreds of seeds and can pick the plants you like
3. How long does rhubarb seed store for under good conditions?
no idea I'm afraid
4. Is there anything special (such as stratification or scarification) that needs to be done to the seeds before replanting?
No they grow very easily 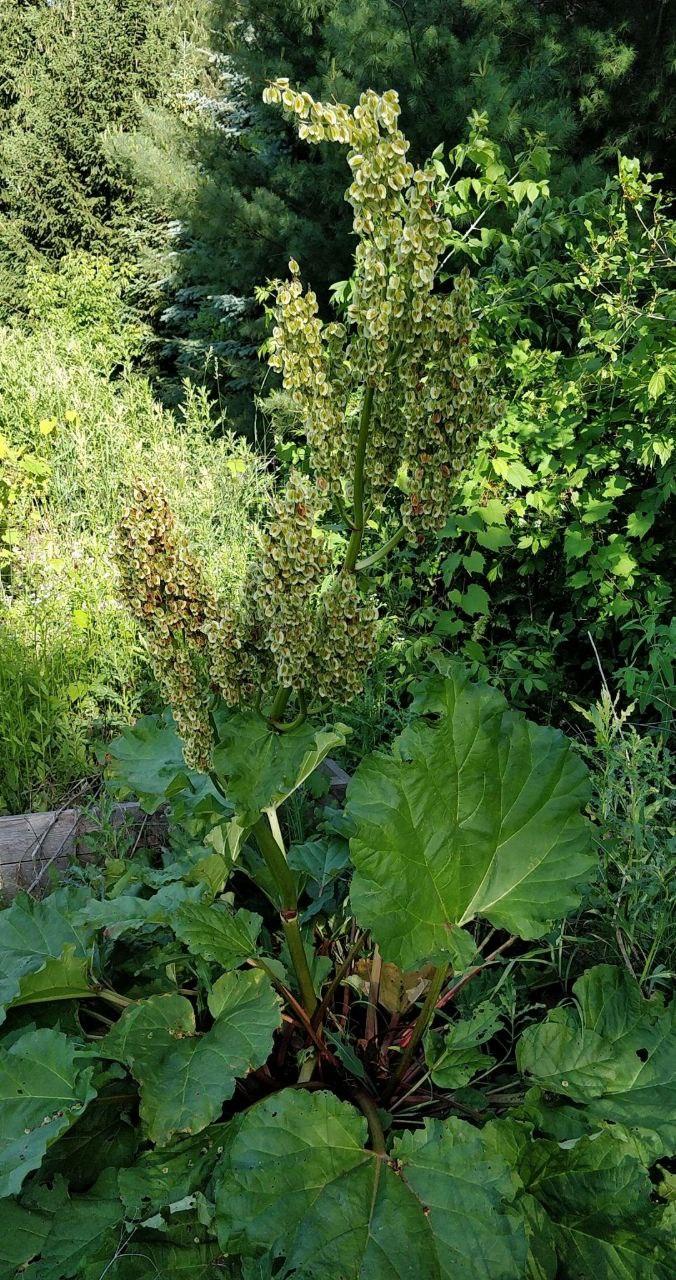 posted 1 month ago
It's nearly ready to take over the world! Rhubarb really does have impressive flowers/seadheads.

posted 1 month ago
I am also thinking of saving rhubarb seeds this year, mine are starting to dry but don't seem quite ready yet
DSC_1639-(4).JPG

posted 1 month ago
Decided to harvest my seeds today. They were starting to fall off the stalks on their own. I think I'll save them until next spring for planting.
rhubarbseed.JPG 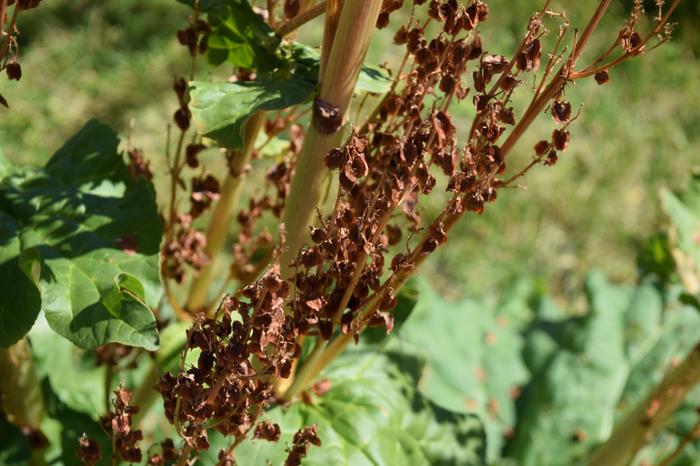 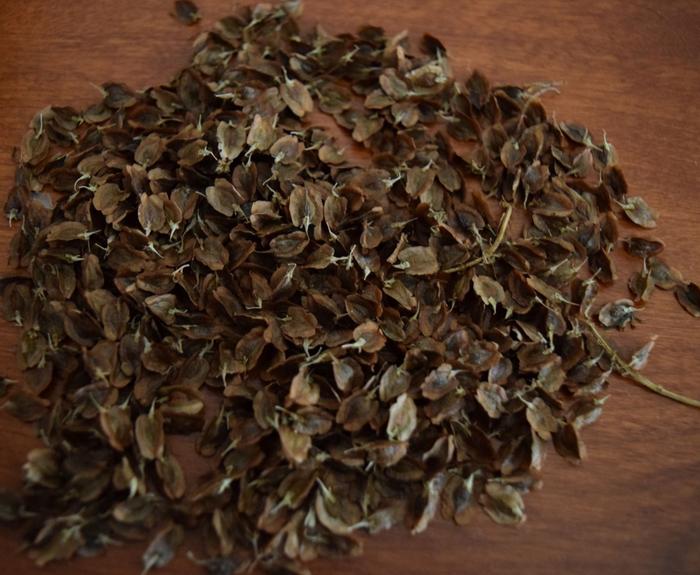 Posts: 5682
Location: Cache Valley, zone 4b, Irrigated, 9" rain in badlands.
2256
posted 1 month ago
I recommend mimicking rhubarb's natural life cycle of germinating with the fall monsoonal rains. For me that would mean planting just before rain is expected in late August or early September.

posted 1 month ago
If I remember in the fall, I'll give that a try
Hugo Morvan
gardener

posted 1 month ago
I’ve had them fall off by themselves. None popped up neither in spring nor in fall. I’ve seeded them in small pots, big pots. Nothing, nada.
I’ve got three kinds, one old heirloom. None worked.
I’ve been swapping seeds and got some super old rhubarb seed. Bingo! 7 plants grow nicely now. From those i might be able to attract viable seeds and make people happy on seed swaps.
But i don’t need more rhubarb because they divide quite easily in autumn. Get a piece of root and a shoot in the ground. Or just split whole plant in four large bits with a sharp shovel.
The shoot dies back in winter where i am. And i kept them in pots inside away from the frost, but planted into their forever place this spring, they all lived. Next year they’ll be big and i can start making people happy with the stalks.
Hope the seeds work for you!

Michelle Heath
pollinator
Posts: 280
Location: WV
56
posted 1 month ago
I've been growing rhubarb from seed for a few years now but have always purchased seed since I wanted to try new varieties.  Germination was generally in about a week but that was indoors with a great deal of pampering in early spring.  The older variety I brought from my grandmother's garden (could be Mary Washington) gets divided every few years.

My reasoning for growing from seed is that I get more bang for my buck.  Yes seedlings take extra care and an extra year to harvest versus divions, but much cheaper than divisions.  I hope to purchase a variety called "Canada/Canadian Red that I've heard great things about but by the time I think about ordering it's sold out or the shipping is outrageous.
Vera Stewart
pollinator
Posts: 361
Location: 7b at 1050 feet, precipitation average 13 inches, irrigated, Okanagan Valley
91
I like...

posted 1 month ago
I'm hoping that if I can get seeds started later this year/next spring, I'll be able to get some red stalked plants going. At the moment I only have green. I've read somewhere that one in twenty or so seedlings will be red.
Skandi Rogers
pollinator
Posts: 1888
Location: Denmark 57N
478
I like...

Vera Stewart wrote:I'm hoping that if I can get seeds started later this year/next spring, I'll be able to get some red stalked plants going. At the moment I only have green. I've read somewhere that one in twenty or so seedlings will be red.

I sowed "Victoria" seeds this year I had about 30 babies all were red, though some were redder than others...

posted 1 month ago
How crazy! I have "Victoria" as well!
J Grouwstra
pollinator
Posts: 130
Location: Fryslân, Netherlands
54
posted 1 month ago
I've grown a couple of varieties from seed, Victoria being one of them. Victoria is quick to establish, probably that's the reason why this variety is often sold as seed. The other rhubarb I started from seed is Näsåker, a much less common variety with a Swedish origin.
Growing those two varieties from seed gave two quite different experiences.
I started both in spring. Victoria grew quickly, and already gave large plants the second year, while Näsåker was still small in its second year. It made me doubt whether Näsåker would come to anything, while Victoria already looked amazing. But in the third year Victoria began to bolt a lot, with the edible stalks becoming thinner and thinner, and Näsåker was now really beginning to size up, without bolting. Right now and the plants should be in their fourth of fifth year, I'm appreciating Näsåker much better than I do Victoria. All my Victoria plants continue to bolt, and give me thin stalks, while none of the Näsåker rhubarb has bolted on me yet, and the stalks are such that, when I'm harvesting, I'm looking for the thinnest ones; they're very big. They have a pleasant red colour as well.
The only thing that the Victoria has up on the Näsåker is that it's earlier. After a mild winter it can be quite a bit earlier, when there's a late cold snap there's not much difference.

My guess is that a slow growing, slow to establish rhubarb will also be slow to bolt, and that a faster growing rhubarb will also bolt faster. That usually goes for veg: what grows fast, will be quick to make flowers.
So if it seems to take a bit long to get your rhubarb established; that might actually turn out to be a plus. Good luck!

posted 1 month ago
Funnily enough hearing that victoria gives thin stems is excellent news for me, as buyers don't want thick stems! I have some Rhubarb that I brought with me from my previous house, it's not to happy here but it grows and produces very thick stems, half a stem is enough for a pie. I have no idea what type it is, it came with the other house, it's half red half green, the bigger the stem the more green it is.
It also flowers (or tries to) every year, which tells me I am doing a good job with it.