The Vegetarian Myth: Food, Justice and Sustainability by Lierre Keith 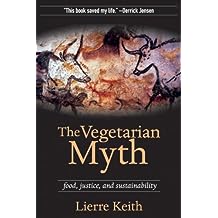 Lierre Keith believed in the plant-based diet and spent twenty years as a vegan. But in The Vegetarian Myth, she argues that we’ve been led astray—not by our longings for a just and sustainable world, but by our ignorance. The truth is that agriculture is a relentless assault against the planet, and more of the same won’t save us. In service to annual grains, humans have devastated prairies and forests, driven countless species extinct, altered the climate, and destroyed the topsoil—the basis of life itself. Keith argues that if we are to save this planet, our food must be an act of profound and abiding repair: it must come from inside living communities, not be imposed across them. Part memoir, part nutritional primer, and part political manifesto, The Vegetarian Myth will challenge everything you thought you knew about food politics.

Lierre Keith was vegan for almost 20 years. She explores why she was vegan, and what led her to give it up.

From her point of view, there are moral, political and nutritional reasons for vegetarianism and veganism. Apparently she believed in all of them, and in this book explores them and what she has come to see as the fallacies inherent in each of them. The book is full of her pain and her outrage. She wanted to do no harm to any living creature. She wanted to save the earth, and thought veganism was a contribution she was willing to make. She dedicated herself to it, and thereby permanently sacrificed her health.

She shares her discoveries of how vegan and vegetarianism negatively impact diversity and the flora and fauna of vast former bioregions as annual agriculture despoils the soils, and usurps the habitat of millions of animals who would otherwise live in community in the former rainforests, prairies, forests, marshes, grasslands, savannas and veldts.

Passionate enough to sacrifice herself for the benefit of other creatures, she is passionate in her re-entry into what she sees as the complete circle of life, where all eat and are eaten.

My opinion about annual agriculture matches her conclusions, but I think she would reach a wider readership if she had held back on the passion in her book. Just the same, a curious person, whether omnivore or no, could learn from the meticulously documented research she presents, the research that convinced her.

I'm reading this book now, and I'm a huge fan of Lierre Keith. It's really impressive, how dedicated she was to do the right thing - regarding her veganism, environmentalism, etc. I love her conclusions too. Anyone who cares about anything should read this book... besides, it's just well written, and can be read just like any other literature. There is so much drama in her struggle against slugs, or when she ate tuna for the first time after many years... I think it could be made into a feature film.

posted 1 year ago
I'm part way through the audiobook version of this, and am enjoying it so far. I do agree with the other comments; the over blown emotive language is a bit off putting in places. However, so far it is tackling ethical issues associated with the whole food supply system, and dealing head on with the collateral damage of vegetarian and vegan diets caused by land use changes and ecosystem harm. She is drawing heavily on the influence of permaculture as a grounding for a writing.

I think she is hoping to persuade vegetarians of the hypocrisy in their positions - "Meat is murder" while ignoring that industrial modern agriculture is draining rivers and causing widespread collateral environmental damage is being hammered home in the section I'm listening to at the moment. I do hope that she reaches the audience that she is hoping for, but I suspect that they will not be receptive to her message in the first place. As an omnivore-permie the message resonates with me strongly, but it is already well within the range of ideas I'm comfortable and familiar with. I have personally written on these issues before in my own niche (exploitative beekeeping practices and the industrial almond industry, supplying vegan almond milk).

I'm looking forward to the rest of this, and would recommend it.

Apparently, this is a very controversial book. At least reading through the reviews on Amazon, it seems people either loved it or hated it. But then, the subject does tend to push some hot buttons. I read it as part of a research project, and am really glad I did.

It's an emotionally honest book. It offers a front row seat to the author's journey of going from vegan to gardener and the struggle of what that meant. Basically, that if animal products aren't used in the commercial production of food (as organic fertilizers and soil amendments), then petroleum products are (as chemical fertilizers and 'cides).

It's a well researched book. This gal did her homework, and was willing to examine her ideas about diet and growing food. And in that, it gives the reader an opportunity to examine the mainstream beliefs about how our food is produced.

Well written and definitely worth reading.