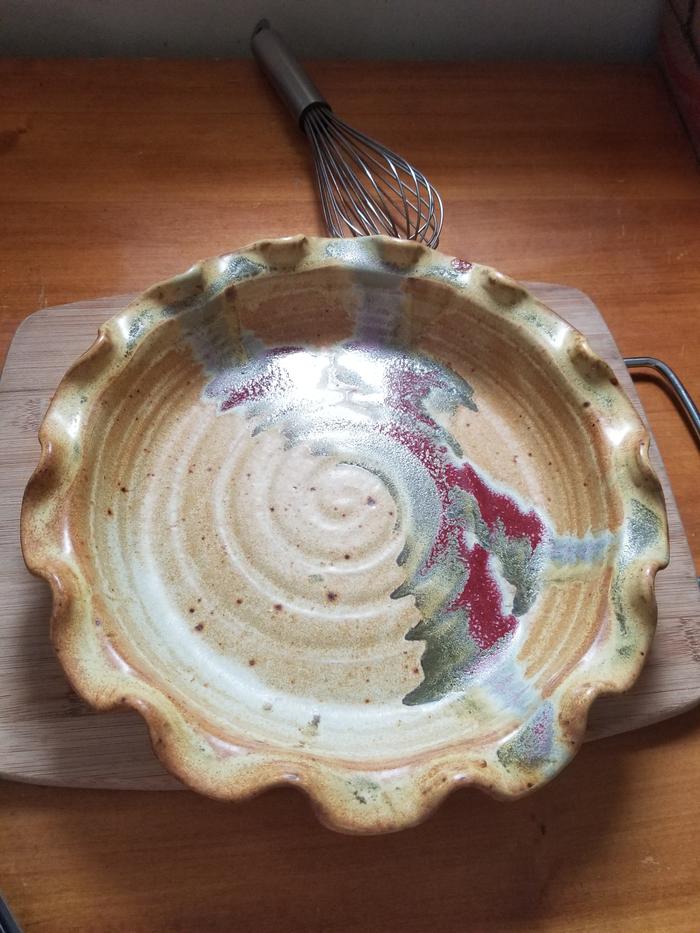 A hand-crafted clay stoneware pie plate coated in lead-free glaze. Available in 4 different color sets. The above image is from the Brown Ash set, though they also have Red Splash, Blue Splash, and Purple. A recipe book is included with the purchase. The company crafts many other stoneware baking and serving dishes, as well as a few decorative items.

I am very particular about my bakeware. In the past, I have tried all sorts of pans for any number of uses. Terracotta turned out to be a true failure in my past. Because of that, I have been slow to try stoneware as a baking surface. This company caught my eye a few months ago and I just really liked the look of the dishes. Talking to my wife, I noted that I thought they would be really nice to own and I might have to give them a try at some point.

When our anniversary arrived, she had bought as a gift for me. Two days later I had what I needed and made an apple pie. Since it was a test run, I bought a store crust (normally I make my own) to test it with. Where former test runs of other dishes usually stuck or had poor browning, etc, this one turned out perfect. It didn't stick at all and was perfectly browned everywhere. It cooked evenly and I had none of the issues I have had with other pans in the past. It is deeper than some of my former dishes as well, which means I will be able to broaden the pie options a bit.

I've gone from leery of stoneware bake dishes to eager to own more. I'll almost certainly pick up another pie plate (or two), as well as a number of other dishes the company makes. I wish I'd bought this years ago!