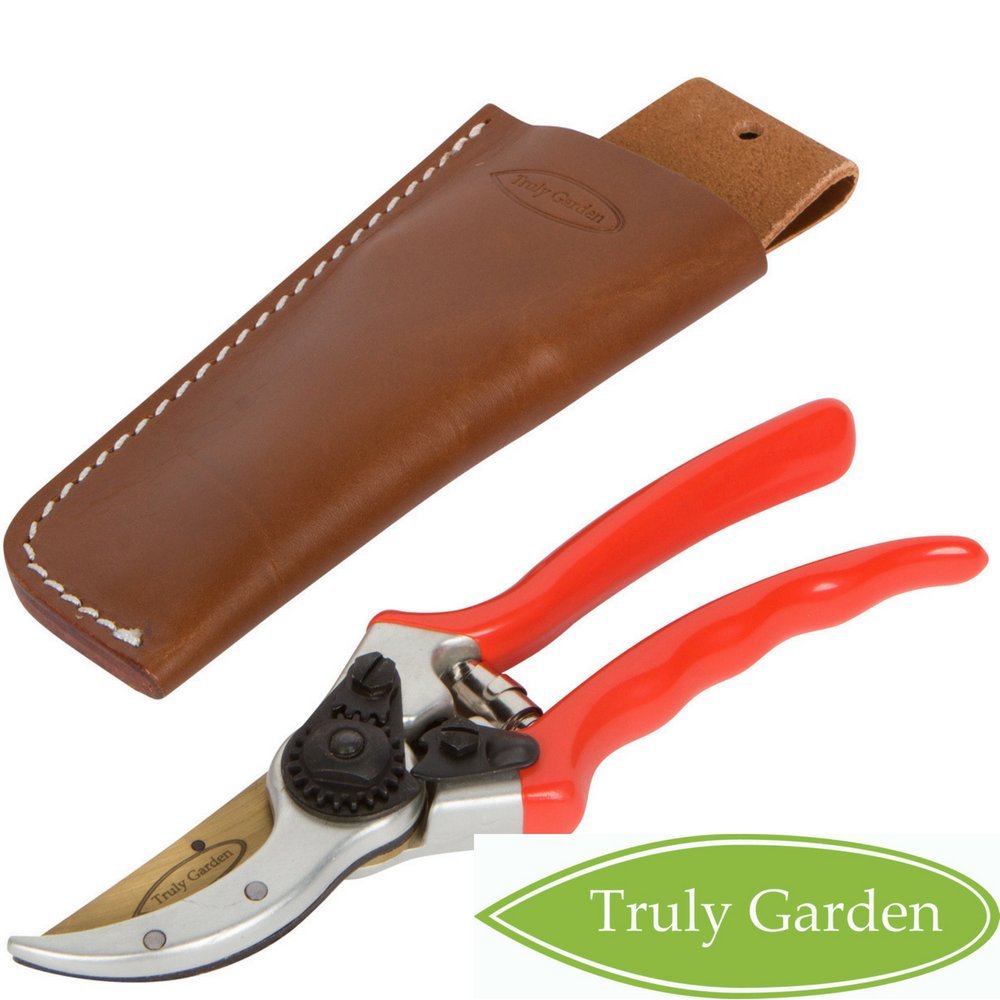 These are pruning shears made by the creator of the Hori Hori garden knife and Rechargable Headlamp. They come with their own leather sheath. Here's the descriptiong from the amazon page:

RAZOR SHARP: Truly Garden Bypass Pruning Shears are a heavy-duty garden tool ideal for cutting up to 3/4-inch thick branches and flowers. Can also be used as flower cutter, wood cutting scissors or garden trimmer.
QUALITY PRUNING SHEARS: Made of quality blade coated with titanium to protect from rust.
ERGONOMIC: Handle is made of Aluminum. Designed and coated to have a comfortable grip that allows you to be in control.
PERFECT GIFT FOR GARDENERS Truly Garden Bypass Pruning Shears come with a genuine leather sheath for safety. The leather case attaches to your belt so you can carry it safely with your hands free.
MADE BY TRULY GARDEN: Truly Garden is proud of our 5-Star Seller Rating and offer a 100% SATISFACTION GUARANTEE and 5 YEAR WARRANTY on this product.

posted 2 years ago
I give these pruning shears and sheath 9.7 out of 10 acorns.  These are truly fabulous pruning shears and they do come very sharp. They cut just as well as my felco pruners, and are currently $15 less expensive, and come with a leather sheath. The sheath itself is very nice, made from durable material. I kind of wish it had a clip I could use to clip onto my pants or pocket, rather than having to put it through my belt loop. But, as the pruning shears are snug inside the sheath, they would likely pop the sheath off of my pants if there was a clip instead of a loop (in fact, I have another sheath that has a clip on it, and put these shears in it. Quite a few times the whole thing popped off my pants, so the belt loop is probably a wise choice!).

As I said, these pruning shears are sharp, and they cut through things that my fiskar's pruners won't cut, and they cut just as well--if not better--than my felcos (my felco's are probably a bit dull at the moment, so it's a difficult comparison). I have small hands ("small" gardening gloves are often too big for me), and usually use the felco's for small hands, but the Truly Garden pruning shears work just as well for me, and they actually make it a bit easier to use two hands to cut through thicker/tougher wood. (I tend to use my pruning shears to cut larger pieces of wood than they are supposed to, as I have them on hand and a walk to the house is a bit too far.) These pruning shears also work great for my husband, who has larger hands.

The only slight downside to these pruning shears is that the locking mechanism is a bit hard to lock. It's stiff, and I have to push a bit to lock the shears. Perhaps a bit of oil would help make them easier to lock. This really isn't too big of a problem, though, as I often don't lock them, anyways, as I store them in their spiffy sheath!

I like that the blade is larger than on my flecos--this allows me to cut up comfery and other mulches quickly and easily. Pruning shears are my go-to tool for just about everything from cutting up mulches, to pruning back blackberries, to cutting salmonberries and pruning tree limbs. These shears work wonderfully at all of these tasks!

All in all, these are FANTASTIC pruning shears, and you get a big bang for you buck with these. If you're trying to decide between felcos or Truly Garden for pruning shears, I would chose Truly Garden. You get the sheath as well as shears that are comparable to felcos, for almost half the price.