posted 3 years ago
This is a thread about my kids' Tree Fort House (made largely forCommunity badge bit "Brand a Location").

A few weeks back, my kids and I went to a copiced maple on my property. I was going to cut down one of the trunks to make a stool out of it... and then my kids decided that they wanted it as a tree house. I certainly couldn't cut down a trunk then! 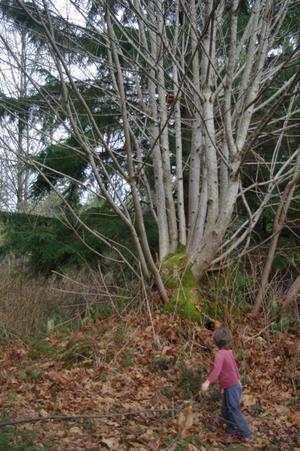 My son decided to name it "Tree Fort House," and both kids love scrambling around in it. We've added a few planks of wood to increase the walking area, and I get to hover down below it whenever my daughter is in it (she needs help up and down, and at the ripe old age of 2, isn't very stable up there).

When I bought a woodburner with my Christmas money, my son decided I should make a sign for his Tree Fort House, and so I did! 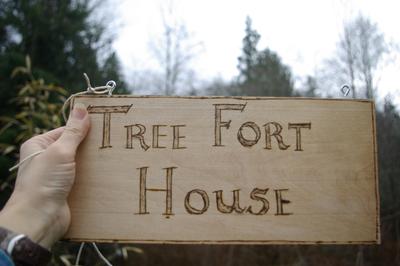 He wanted it to hang, rather than being on a signpost, and so we put in little eyehooks and brought some twine. My son gleefully ran to install his sign at his Tree Fort House 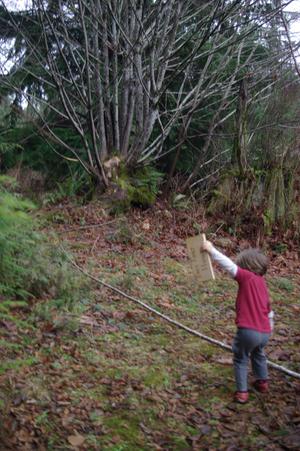 With it hung, both kids went straight to climbing up and playing! 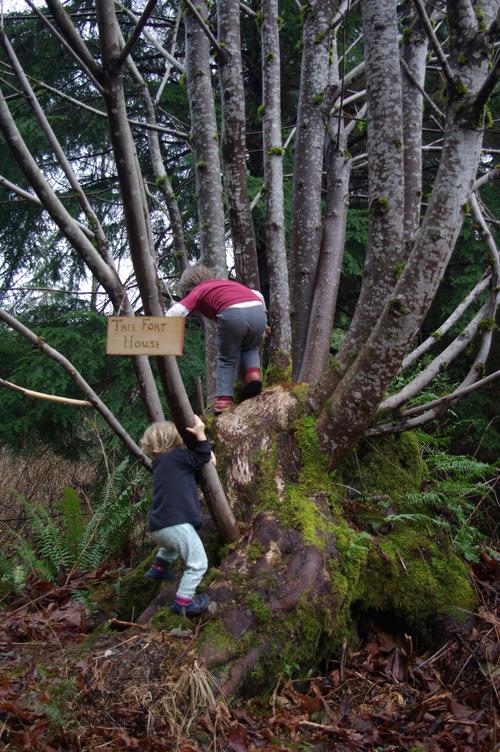 posted 3 years ago
Give them some rope and could make a bunch of hand holds and railings!
So much fun, a great tree for kids!

posted 3 years ago
We have always had tree forts growing up.

My cousin built one just behind our current house made out of saplings, but was all weather and had bunk beds and everything. It was great fun to spend the night there as kids.

In my book review on "You Alone in the Maine Woods", I talked about building survival shelters and going out into the woods and spending the night, quite the feat when it was down below zero in the middle of winter and you are just a kid, but it built a huge sense of confidence within me.

For my own family, we have gone out and built a tree bough survival shelter, kindled a fire and made hot cocoa from water from a nearby stream.

My parents (the kids grandparents) have a 2 story, tree fort that has stairs, windows, doors, window screens, kitchenette, etc inside it.

Without question; no matter what form a tree fort takes, they are the best! 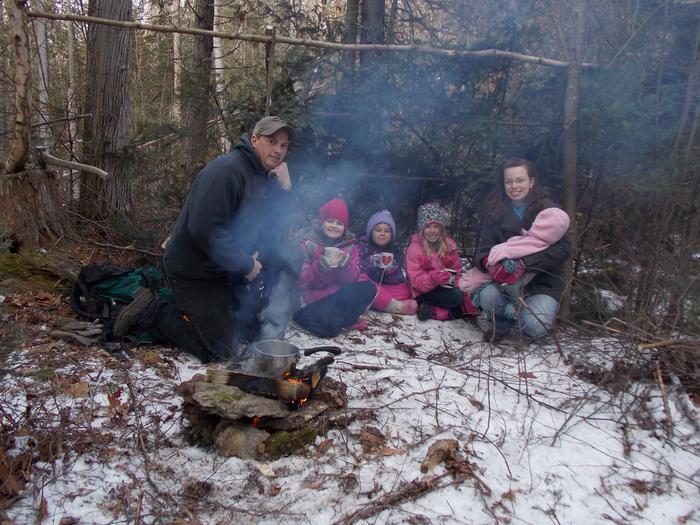 posted 3 years ago
Oh boy! That looks like they are having fun. I had two large apple trees in my backyard that I used to climb all the time as a kid, sometimes just to pick and eat apples. Other times, these trees were my fort, spaceship, hide away, or some other imaginary place depending on what games we were playing.  We also had a huge maple tree taller than our three story house to which my father attached a rope swing up about 30 feet. That swing could swing clear over into our neighbor's yard. Those were the days!

I hope these little guys continue to have fun with their Tree Fort House. Post more pics if they make any modifications. I would love to see them.
Nicole Alderman
steward

posted 3 years ago
Update! We got our first improvements for Tree Fort House!

We got a bucket (I asked my husband to buy a metal bucket on his way home...instead he got a plastic red one, since red is my son's favorite color). I went up and predrilled a hole in the tree (with the fiskars non-electic hand drill) and then screwed in the hook (previous owner had a bunch of these already installed in our garage, so I unscrewed from the garage, and put it in the tree instead.). We actually installed it last night...but it got too dark, so we came out again to play today!

My son loves it! My daughter was a bit to unstable to go up in the snow-covered tree, but loves putting things in the bucket for her brother. 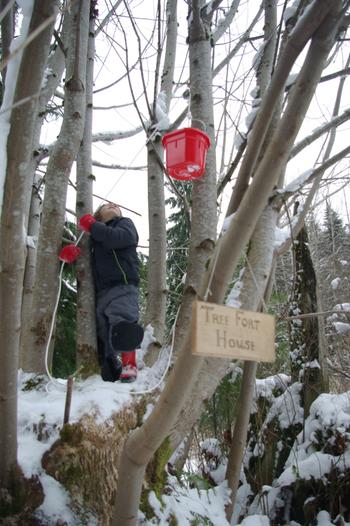 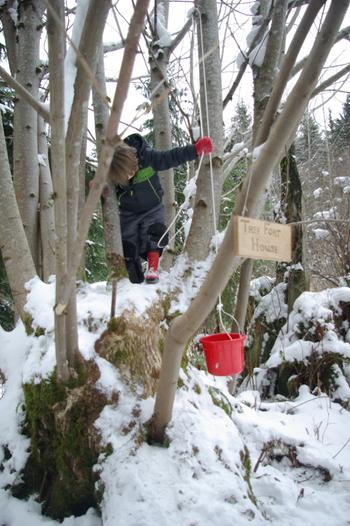 A few feet from Tree Fort House is what we call Huckleberry Book Nook. It's a little nook sheltered between a hemlock tree and two cedar stumps that are sprouting tons of huckleberries. 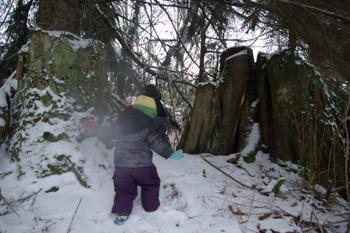 I named it hucklberry nook...but my kids didn't know what a nook is, so my son called it "Huckleberry Book" and my daughter "Book Nook." She's claimed this area as her "house" while my son has Tree Fort House as his house. She saw his sign, and so wanted one of her own. So, I made one with my woodburner! 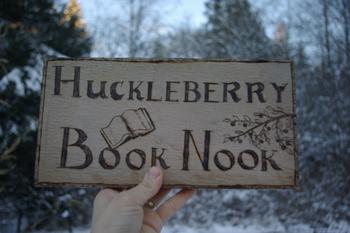 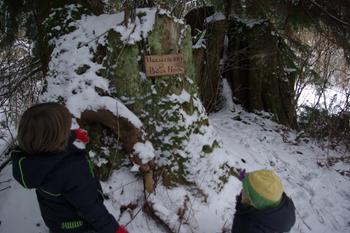 They had me keep moving the sign around, but I think they're happy with the placement now! 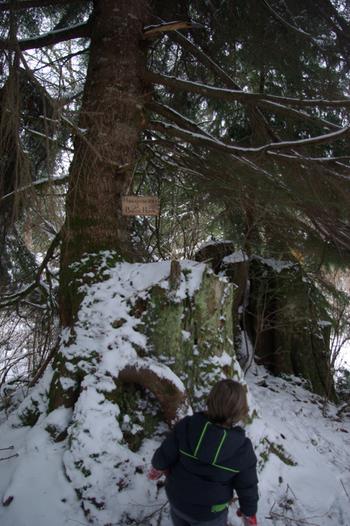 We also discovered that the small hill between the two makes a great place to sled! 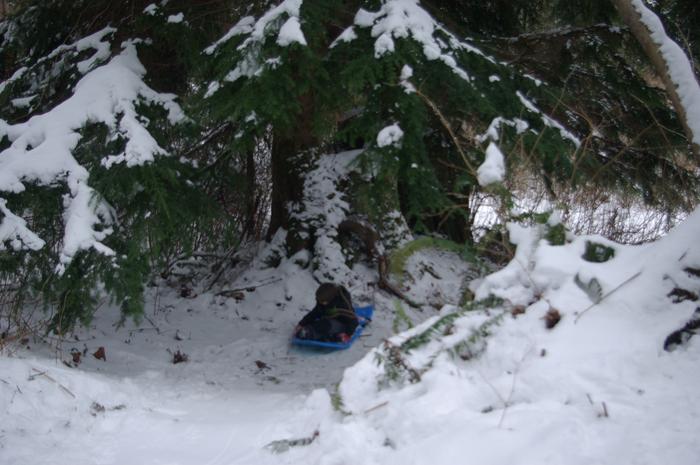 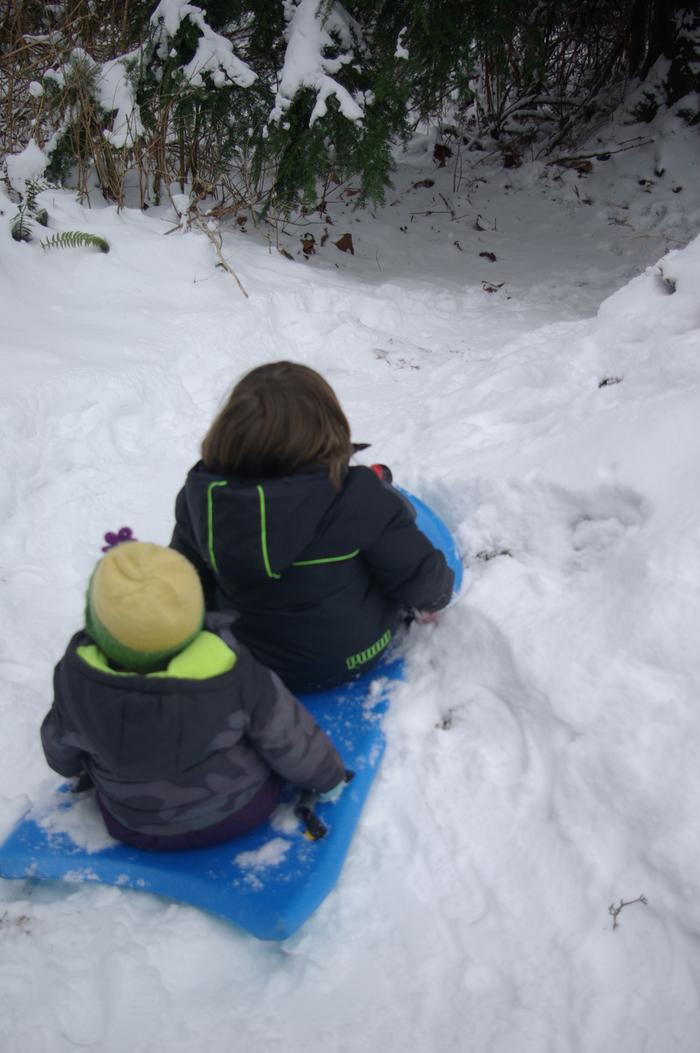 They had me keep moving the sign around, but I think they're happy with the placement now!

posted 3 years ago
Finally got some more work done on the Tree Fort House! Yesterday I got out the woodburner to burn the edges of the ladder rungs, only to have the kids want me to make designs on them instead. So, now the rungs have little hearts and stars and hot air baloons and a rainbow! I installled them with lag bolts, and discovered when drilling that the sap was flowing! Drilled a second hole and stuck a straw in it, and we collected the dribbles with a cup (my camera's autofocus malfunctioned, thus the blurry picture).

Now my daughter can climb up by herself. She also likes to sit on the rungs!
IMGP0969.JPG 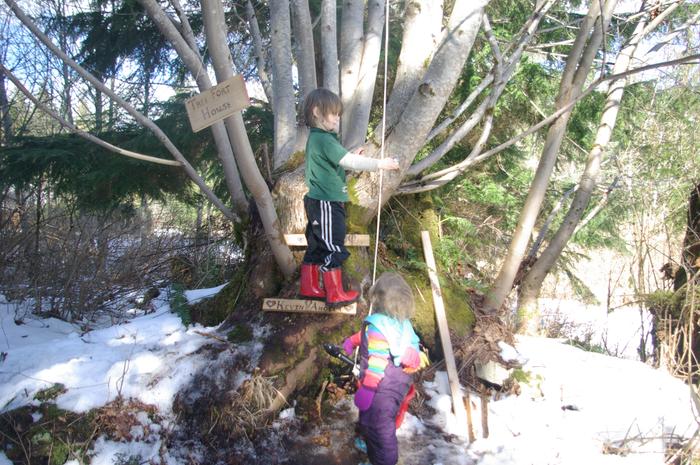 posted 2 years ago
I almost forgot to share these pictures! Last month we added a tree fort essential: a tin can phone!

posted 1 year ago
My kids still love their Tree Fort House. They are scared of bears in the woods, so they always make me come with them when we go there. So, I busy myself making things for their house.

My daughter has decided that she "lives in nature land" and that Tree Fort House is her house. She then puts in orders for things (which I, of course, end up making) and then my son delivers them in the bucket and says, "Ding Dong, Doorbell!"

This has been actually pretty fun for me, because as a kid, I always wanted to make a broom or fishing poll, etc, out of ferns and sticks....and it never worked. Now that I'm adult, and have learned some stuff thanks to the Textile badges, I can actually make them things!

First I finally realized my dream of making a broom!

And also a basket! (I made it out of trailing blackberry vines that I rubbed across a rock to de-thorn)

You can tell this picture is from a few months ago, because I picked salmonberries, and those sure aren't around any more!

A month later, the blackberry vine basket was still holding up, though no longer a bright green. But, the broom made of Western Hemlock branches lost all it's needles. This--of course--required me to make ANOTHER broom. This time I used Western RedCedar branches to make the bristles. Like with the other broom, I used blackberry vine to tie it together.

I also tried my hand at making a doll....and well, it sort of worked. I think I need to watch some tutorials on how to do this, haha!

She also commissioned a bracelet...so I made one out of blackberry vines!

Of course, they've been having fun playing, too! My son found this bendy branch and used it to inch his way down from the fort. The branch was never the same afterward, but it sure was fun!

Lexie Smith
Posts: 67
9
posted 1 week ago
This sure brings back wonderful memories! We had a grove of sweet gum trees that were all young enough to be really flexible but strong enough to jump up and down on and build with and we spent countless hours imagining it different places and themes. It would be a village or neighborhood one day and a rocket ship searching space the next and so much fun that the obligatory lumps, bumps and contusions were worth it.