Help from a supercapacitor.

posted 3 years ago
I have always had trouble getting much out of lead batteries quickly until I ran into one of these.  Thanks to the boom box industry they have become quite reasonable.  Using rip saws and starting motors is always a problem with cheap inverters.  This 300 f cap will start my rip saw on this 12 year old battery all day long.  I like having portable silent power to run around the farm.  I just plug it in to a solar panel when not in use.  The little blue box is the cap.  I have about $200 into this one, but it beats burning gas.
IMG_20180102_221549763.jpg 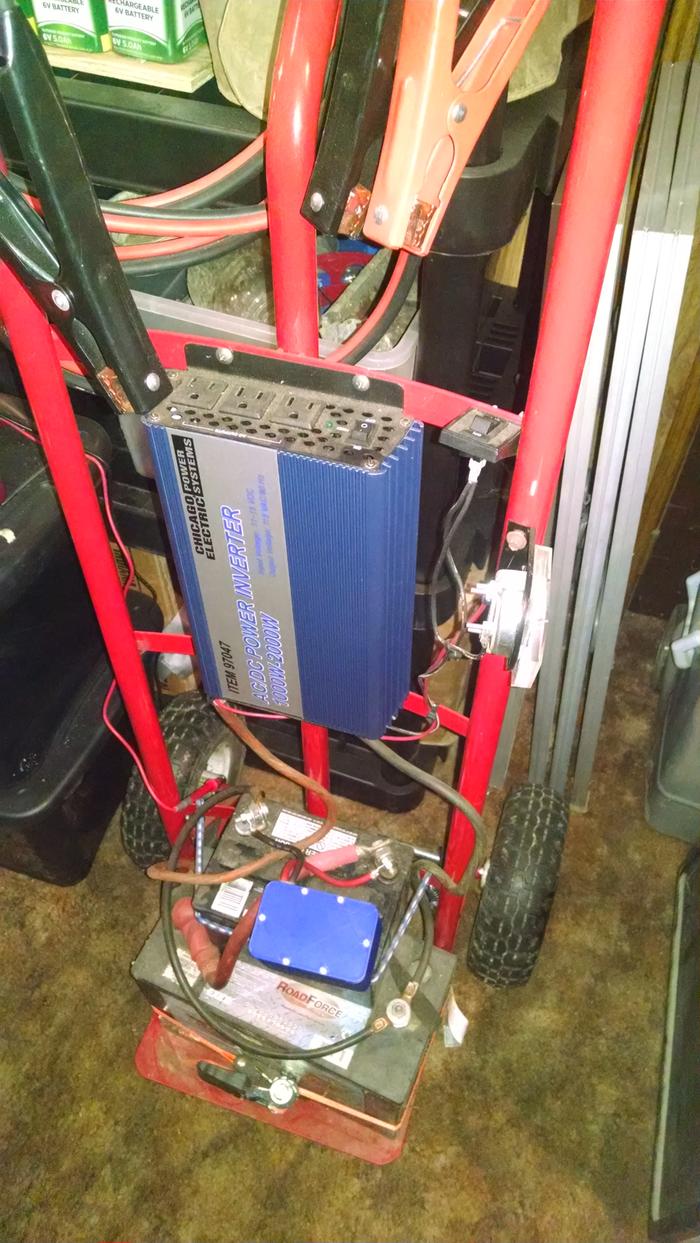 bob day
pollinator
Posts: 790
Location: Central Virginia USA
76
posted 3 years ago
glad you posted, did you see Tesla just bought Maxwell, a super Capacitor  company and evidently Musk was thinking about researching them a long time ago (guess he got distracted with Pay Pal and all)

posted 3 years ago
Hi Bob.  I'm not real good at keeping up with the news so I didn't here that.  I think with the graphene technology we are at the beginning of a whole new world for energy storage.  Once we figure this out the world will no longer need to fight over energy sources. I have been using these for quite a few years. I got them from a guy in Tennessee that no longer makes them.  I gave $120 for the cap.  I started building my own for $28 for a 30 f at 16.2v.  One of my friends is an electrical engineer and gets the individual cap 2.7v for me in bulk.  6 of them in series give me 16.6v.  You may be right about the f rating, but I have no way of proving it with my meters.  When I was young a 1 f wouldn't fit in my bedroom.  Its amazing what you can do with one atom thick layers.  If you get one remember they charge as fast as they discharge.  They can shock you even at 16.2v, DC hurts.  Do not over voltage them or the go pop, but not much smoke. I use 100 ft of 14 ga to charge it before I hook it to a system.  The one shown will start my car without a battery.   I also use the little system to jump start the old tractor.

posted 3 years ago
Elon Musk doesn't get really get distracted, I think. I would guess that it's more of a priority thing. He probably couldn't make proper use of current supercapacitor technology without getting TESLA's infrastructure to the point it's at now.

Watching him in an interview is really telling. He pauses regularly, but it's not a verbal placeholder; it's like his linguistic faculties are playing catch-up to the workings of his mind. Or he's just in the habit of checking that his brain is loaded before he goes and shoots off his mouth.

In the short- to medium-term, supercapacitors have great potential to speed charging, especially in intermittent, hard-charge scenarios like regenerative braking, where excess charge could then be transferred at a slower rate to a battery bank.

A thought I had eons ago, not an original one, by the way, led to my original discovery of the existence of supercapacitors. I thought that if one could store the energy in a bolt of lightning, we would have no shortage of electricity.

So imagine tall buildings around the world equipped with city-powering supercapacitor arrays collecting electricity from the atmosphere. Imagine lightning rods on barns providing electricity for a month after each thunderstorm.

And imagine recharging your electric car through plates set in the ground while you sit in line at the drive-thru, waiting for your breakfast sandwich and coffee.

bob day
pollinator
Posts: 790
Location: Central Virginia USA
76
posted 3 years ago
Obviously Musk's current investment is not an idle curiosity, Maxwell not only does super caps, but has some LIion battery technology that may make LI bats lighter and more efficient and easier to make. Either way he's bound to get his money's worth.
Mike Lang
Posts: 25
3
posted 3 years ago
Just because we're talking about super capacitors, here a video from July 2018 on their production: