posted 10 years ago
I just watched the most recent video by these guys on augmented reality technology, and I enjoy how they make tech things so easy to understand.

And just in time for Halloween, here is Common Craft's (older) video on identifying zombies:

Another good one is Electing a US President. Just don't watch their video on CFLs...

brett watson
Posts: 100
Location: Northern California Zone 8b
1
posted 10 years ago
Just showed this to my class as a PSA

posted 10 years ago
Welcome Matthew! Wow, it really feels like chatting with someone who I'd shake hands with now. Thank you for changing your name.

posted 10 years ago
Here's another type of Halloween fun--a pumpkin trebuchet. As an agri-tourism thing, it could almost be posted in the Farm Income forum, too.

Matthew Fallon
Posts: 308
Location: long island, ny Z-7a
3
posted 10 years ago
they sure can pack a punch, i'll see your trebuchet and raise you an air cannon~

posted 10 years ago
It's not often that you see a pumpkin blast a hole straight through a boat and car!

posted 4 years ago
Love this idea (we made a thread just for it at https://permies.com/t/25058/zombie-attacks-gardening, though here is the photo): 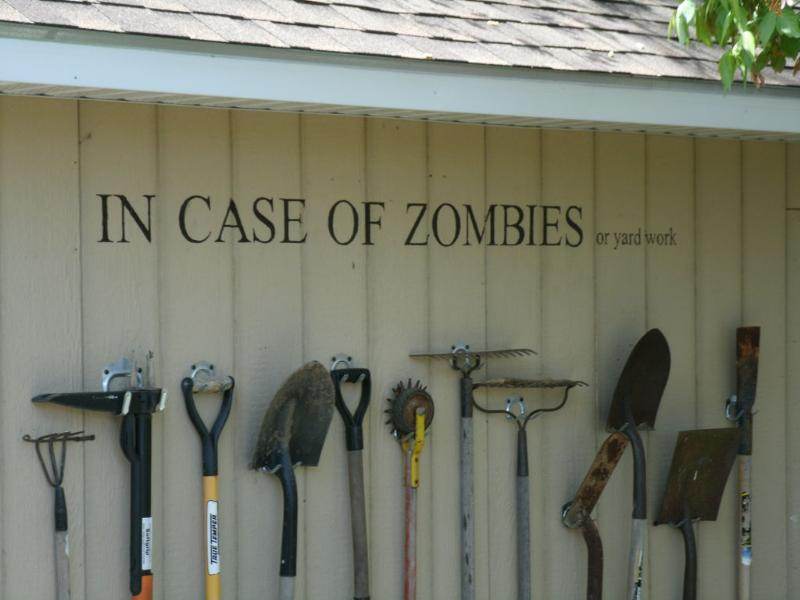 Are you thinking about zombies for Halloween?

Edward Lye
Posts: 160
4
3
posted 1 year ago
That's how I hang my tools only i't off the window grill with large S-hooks and the tools are mostly horizontal.
R Sumner
Posts: 20
5
posted 1 year ago
Well, clearly that guy didn't know what he was talking about (I mean, it's a pass-fail situation and where did he end up?)

For one thing, the preferred term is "undead" -- a zombi is the product of a particular cultural ritual, and don't behave at all as presented. Watch the appropriation!

Also that brain diagram was very misleading. As I keep telling the kids at the park; your primary target is the brain stem. The top and front of the brain are just bad ballast to most viral- or fungal-based undead. High-caliber bullets are good fun and all, but aim for the base of the skull or lower jaw, and expect a hundred shamblers to home in on the sound of the shot (PRO TIP: A Carpenter's hammer to the mastoid process will generally do the trick for organic undead. Hammers are quiet and don't need sharpening.)

And that's another thing: what type of undead? What's animating them? That's really the first question you need to ask (once you and your family are safe in your hidden Oehler bunker: Costco sounds like a slow and dreary death by attrition to me.)

For instance, ask author James S.A Corey (either one): what good will any of the attacks described in the film do against ancient alien nanotech revenants? (If you are very lucky, you will get an extremely detailed and entertaining short story about precisely how each might make the situation far, far worse.) Even viral-based shamblers sometimes have fast agile cousins: sometimes in the same horde. You can expect strange and even coordinated group behavior from fungal infections. And magical undead can be extremely varied and nearly unstoppable by conventional means (Jim Butcher would have us aim for the spellcaster or supporting instruments, but even that just leaves the construct angry and uncontrolled).

But there is good news! Permaculture gardeners have several natural advantages in many life-and-death situations, metaphorical and actual. And not just due to their generally excellent options for improvised pole weapons! Did you know many types of undead are compostable, given the correct techniques? It's actually quite simple given the correct knowledge and preparation.

If you'd like to learn more about composting, and how to handle yourself in the event of an undead outbreak, please exchange your True Name, online contact information, and a psychic conduit to your everlasting soul for my downloadable ebook [include link].