Nathan Watson
Posts: 78
22
posted 3 years ago
Living in Southern Oregon, I get to watch logging operations happen and what I've found is few people realize just how much biomass is wasted. They take the biggest logs and everything else is pushes into giant piles with bulldozers, doused with diesel, and lit on fire. Unless they're doing an unnecessary clear cut, I don't blame the timber companies for burning waste that has no market and cleaning up after themselves. The real question is, why is there no market for this? And what could be done to change that?

We burn huge amounts of biomass in the forest to get rid of it. Then we dig up coal out of the ground to fuel the power grid. Apparently, using logging slash just isn't an economical alternative to coal. Nobody wants to invest in this and it's too far to the nearest existing power plants where this could be burned for carbon neutral fuel.

Even if there isn't a way to burn this slash, or at least not all of it, we could be burying it under the ocean.

Finding new uses for logging waste would not only reduce global warming, it would also revive a struggling industry. We could be responsibly thing our forests, reducing fire danger, and creating new jobs all at the same time.

The sheer volume of co2 captured by wild plants and trees is staggering and far exceeds the energy harnessed by humans. Every year when it's summer in the Northern Hemisphere, global co2 levels actually drop significantly, then goes back up as biomass rots in the winter. If we harvested enough biomass out of the forests, the long term increase in co2 could actually be reversed.

A great place to start with this would be the forests around Paradise CA, and all the other powder keg forests waiting to go up in a fireball. We could create new forestry jobs at the same time.

What are your thoughts on this?

posted 3 years ago
In Maine, we take that logging slash and burn it to produce steam and turn that into electricity for the grid.

On the landing the delimber operator sorts out the logs, studwood, boltwood, pulpwood and firewood, then the loader operator runs the tops and slash through the woodchipper. Granted a truckload of it does not pay much, but its waste wood, and adds up eventually.

I still feel it is a mistake forest-wise. The slash should be left dispersed through the woods where it can rot down and add topsoil, not be burned either at the landing, or at a facility to make electricity. The latter looks a lot better, but the rule in Maine is, "Anything 2" in diameter or less, located within 2 feet of the ground, rots in 2 years time". I can put up with my forest looking messy for a few years if it gains me topsoil. I farm on topsoil after all!

My preferred method is to leave my slash out in the woods (cable skidder with hand felling by chainsaw), and keep driving over the debris to break it down with my skidder. This works really well as the pile ages, because as the wood dries, it gets brittle, and with a 33,000 pound skidder driving over the slash, shatters the debris where rot will take place in just a few years. What I end up with is acres of hugels.

For me, who logs to clear forest into field, time is also my friend because in just a few years time, what would be massive stumps, with clods of soil, becomes tiny stumps that are easily pushed out of the ground by smaller equipment. Stumps rot from the bottom up, NOT the top down.
Travis Johnson
pollinator
Posts: 4958
1182
I like...

posted 3 years ago
As a side note, the waste of these biomass electricity generation plants are used on my farm too.

I no longer use the ash because of recent changes to what it is mixed with, but have used ash from the plants as lime alternative. However, they use lime in their scrubbers to rid the plant of emmissions, and so I can buy that waste cheap. Mag lime from the nearest mine in New Brunswicj Canada is $110 per ton, but I can buy Mill Lime for $22 a ton because it had another purpose to the plant. All this helps my acidic soil get closer to 6.5 for PH levels.

posted 3 years ago
I agree with leaving the slash on the forest floor.  Low piles or a layer touching the soil are not a fire hazard and rot quickly.  Geoff Lawton advocates making sure the wood actually touches the surface of the soil or existing debris layer, avoiding branches sticking up into the air as this inhibits rot. I wish I could remember in which video he discusses this. But he says "the forest grows on the bones of the forest" and a healthy forest has a layer of sticks and other tree debris on the ground.  His method of creating food forests emulates this process in high speed by planting trees to pollard for this mulch material, at a ratio of 90% support trees to 10% productive trees at the beginning. This quickly returns carbon to the soil by fungal action.

It would take a great deal of energy to sink wood debris in the ocean, which seems counterproductive to me.

posted 3 years ago
This situation is very location specific. If you had a power station nearby capable of taking woodchips, then there would be a commercial incentive for the loggers to invest in the chipping equipment and lorries etc... But if such a place is too far from where they are working the fuel and labour costs end up outweighing the profit from selling chips.

On the other hand, this probably means that there is a business opportunity in your area for someone to setup a small scale biomass generator and sell electricity to the grid, based on cheap feedstocks from the loggers.

posted 3 years ago
We actually have a biomass generating plant well within 100 miles. Unfortunately they pay so little most people burn slash. They will only take logs anyway, the slash gets burned. I want the slash and tops.

It's funny this morning I was putting up my ruminations on how todo massive biochar. Not necessarily the right answer in Oregon, but it pains me to see this stuff flaring off with no upside. I figure totally back of the envelope we could be profitable enough at $50/yard to have this enterprise be a full time job for a lot of people. I don't think we would have trouble selling it at that price by the truckload. And we would remove two waste stream items (maybe three).

posted 3 years ago
Hey TJ,  both of those links lead to the same article, I'm guessing one should go a post if yours on massive biochar.
Im looking forward to reading your thoughts on the subject.
I would love to see the slash converted to char, soak up some  lagoon manure and feed the next layer of forest.
The description of forest growing on the bones of forest reminds me of coral reefs.

posted 3 years ago
Well thats embarassing. I probably was going to link to this post from the other one! Changed it!

posted 3 years ago
I am a world away. I am in SE Alabama.  Few people heat with wood nowadays, but on occasion, my "Ex Uncle-in-law" (Owned a logging company.)  would be approached by someone asking to cut firewood from their slashpile. He would always refer them to the property owner and a couple of times, the owner told him to NOT clean up so people could cut firewood.  You don't HAVE to push it all up and burn it if you are going to use a dozier to replant the property. But it does look like shit for a couple of years until the new trees start covering it all up..  My rambling point is,  CUT FIREWOOD. Hell, some of the wood would be good for someone with a portable sawmill..

Jeff Welder wrote:I am a world away. I am in SE Alabama.  Few people heat with wood nowadays, but on occasion, my "Ex Uncle-in-law" (Owned a logging company.)  would be approached by someone asking to cut firewood from their slashpile. He would always refer them to the property owner and a couple of times, the owner told him to NOT clean up so people could cut firewood.  You don't HAVE to push it all up and burn it if you are going to use a dozier to replant the property. But it does look like shit for a couple of years until the new trees start covering it all up..  My rambling point is,  CUT FIREWOOD. Hell, some of the wood would be good for someone with a portable sawmill..

And yet, for some reason firewood is never encouraged at all. There's no big environmental push to move to firewood as a heating source. The establishment ignores firewood as if it weresome obsolete technology from the past. My guess is because it can't be controlled and regulated by government like electricity, nor is there an opportunity for big corporations to create an oligopoly and force out small business as they have with the fossil fuels we use for heating such as natural gas and fuel oil. They really don't like this idea of people having independence when it comes to how we heat our homes. Good points and I completely forgot about firewood in my first post!
Travis Johnson
pollinator
Posts: 4958
1182
I like...

posted 3 years ago
Firewood is just too much work. Period.

People today just do not have the time to devote to it like a generation ago. With blended families, kids have to go here, or there, and time is spent in a car traveling to and fro, or a job requires overtime. It is far better to work longer hours at your job and buy more natural gas, propane or oil then to work several weekends producing firewood.

I am not saying that is right, nor what I do (I burn firewood still), it is just how people today think.
Travis Johnson
pollinator
Posts: 4958
1182
I like...

Jeff Welder wrote:Hell, some of the wood would be good for someone with a portable sawmill..

Last year I logged 1600 cords off my woodlot, and yes some of that was chipped and went into producing electricity. The logs, pulpwood, firewood, boltwood and studwood were sorted out first of course, but even then I was able to saw 7,000 board feet of lumber out of what remained. That is enough lumber for those that do not know, to build half of an averaged size home, and that was from remainders of only 1600 cords of wood. 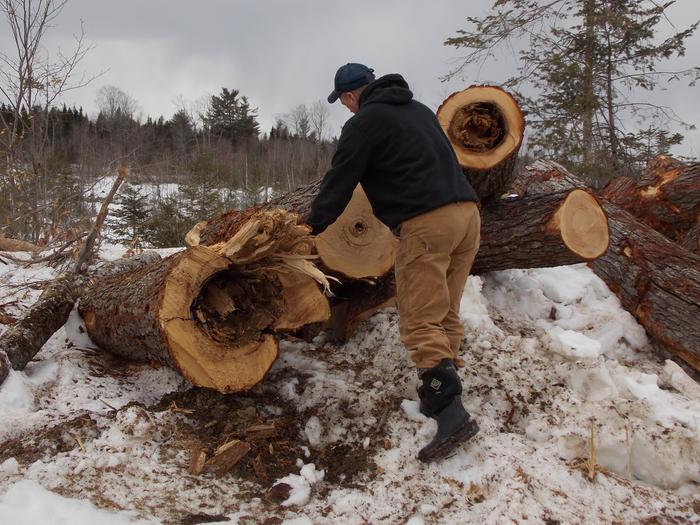