do street lights affect a plants growth and health?

Judith Browning
Posts: 7967
Location: Ozarks zone 7 alluvial,black,deep clay/loam with few rocks, wonderful creek bottom!
1718
3
posted 1 year ago
Our newest garden is half under the light of a street light....lit up like a full moon every night.  I'm wondering if this has any detrimental effect on the plants?
The gardens out back are in the dark but fruit trees and this garden are out nearer the street.

Until recently, we've always lived way back with no yard lights at all.  It would get dark and stay that way until the sun came up

So it depends on the wavelengths. HPS and a few others are used to grow plants.

One article I read also noted how artificial lighting affects the ecosystem by stimulating prey and predator numbers.

In our rural areas, artificial lighting attracts thousands of insects, which attracts frogs, that then attract snakes and nocturnal birds.

posted 1 year ago
A popular date activity in Okinawa is to go see the lit up chrysanthemum fields. Hundreds of light bulbs strung across the fields make for a romantic setting.
There is even a love song about it:


Chrysanthemums are used for funerals in Japan, so in demand year round. Okinawan farmers take advantage of their warm winters and use light bulbs to mimic long days and delay flowering until winter, when demand is highest. The practice is called denshougiku 電照菊（でんしょうぎく); directly translated to electric light chrysanthemums.

I think the light source has to be pretty close and bright, like that of grow lights, but, depending on your street light's brightness and wavelength, it could affect any processes in your plants that are controlled by day length changes. This could mean strawberries produce for longer or, like the chrysanthemums, delay flowering in plants that flower when day length shortens.

I am not proficient in which processes and which plants exactly are affected by day length. Some aren't affected at all. I know some processes are also controlled by temperature changes, so any effect of the street light may be overridden by temperature.  I'll let someone more knowledgeable comment further, and leave you with pictures taken on my and my now husband's date to the chrysanthemum fields. 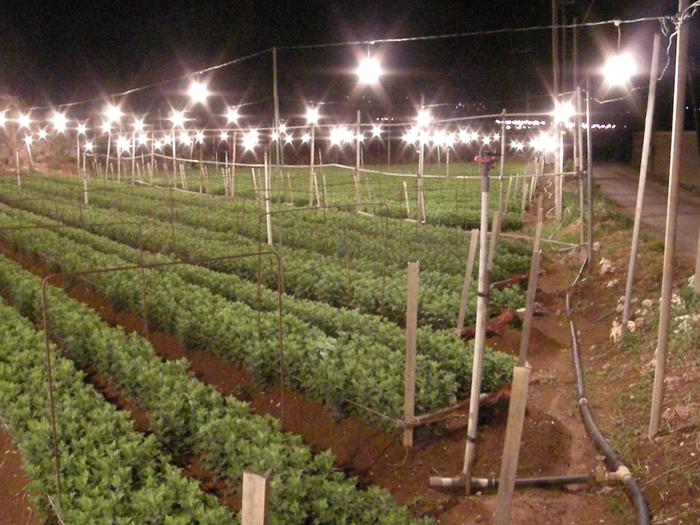 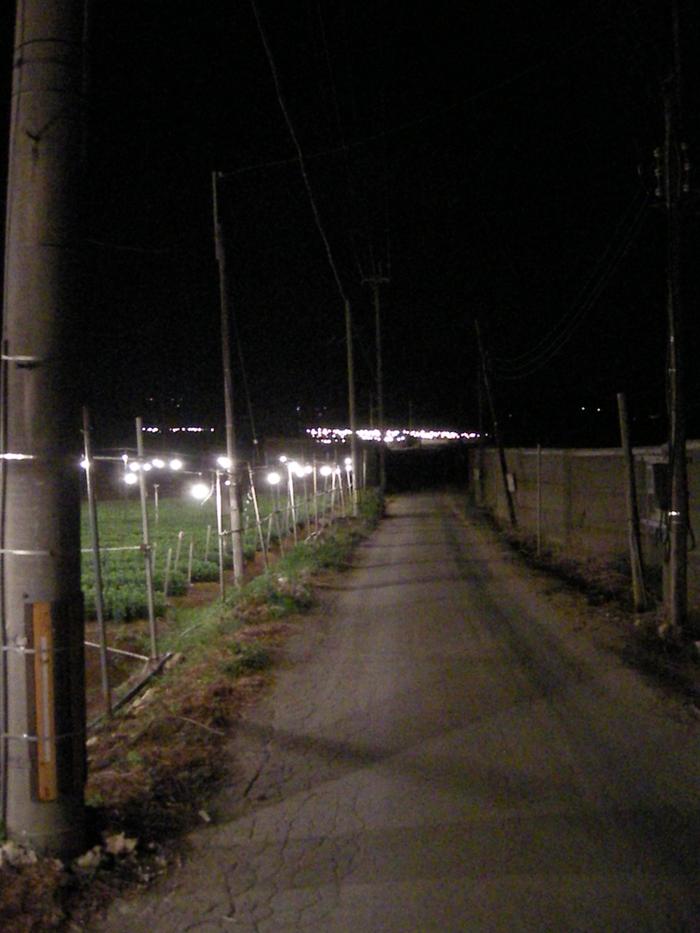 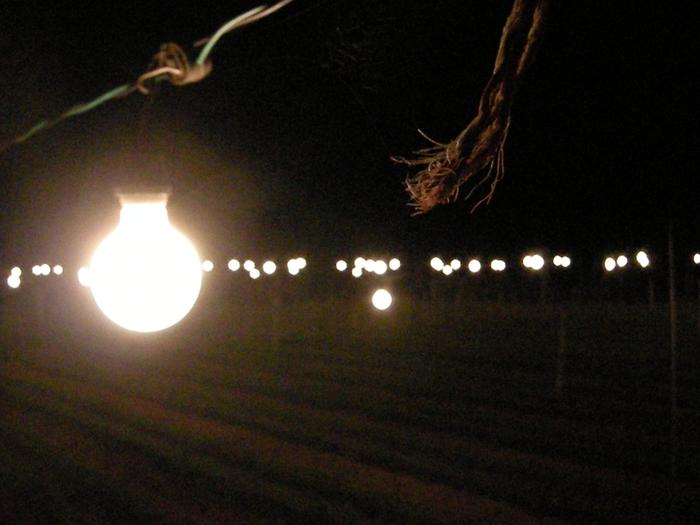 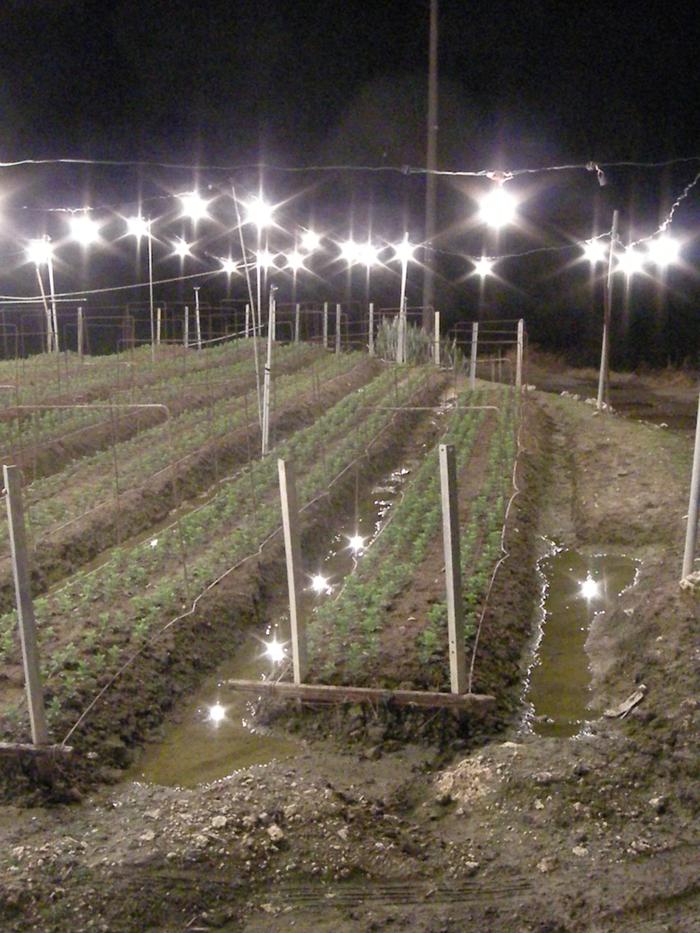 posted 1 year ago
Amy, that's just crazy-cool! Thank you for sharing it - I've sent the video link along to my cousin and his wife, who just moved to Okinawa, last month. I'm sure they'll be very happy to see it, when they wake up.

F Agricola wrote:
In our rural areas, artificial lighting attracts thousands of insects, which attracts frogs, that then attract snakes and nocturnal birds.

I think this is likely to be the most significant effect of artificial street lighting, although perhaps attenuated where there are many street lights.

I live in a rural area where the power utility offers very cheap always-on after dark security lights (mercury vapor? sodium? not sure) that come on at dusk.  There are three on this property that were set up by people no longer alive when the utilities were installed in 1971 or so.  Two of them illuminate parts of my garden.  I can't see any sign that the light intensity is enough to make a difference, any more than the bright full moon does.  But there surely are a lot of insects swarming those lights at certain times!  And though I have not taken a census, I'm morally confident that has affected the population of critters that eat insects.

Intuitively I suspect that the lights are overall detrimental to insect populations, which probably puts a stress on the local ecosystem that I'd prefer was not there.  But it's a very local stress, and if it's drawing in insects and insect predators alike from a broader area (which it is) I would *guess* that the net affect on my garden is a slight benefit, because having those insect predators around is better than not having them.  But really, I'm just guessing.

It was traditional seasonal Aboriginal food.

Over the last few decades they have migrated as far north as Sydney - about 900km. One year they were such a problem that in Sydney they affected nighttime sporting events because of the big floodlights.

Recent research has shown that this moth navigates by visual and magnetic queues:

So, with the growth in electricity lines, telecommunication network towers and lighting expansion for new suburbs and roads, the poor moth is getting confused.

This has very serious impacts on the animals in the Alps, particularly the extremely cute and endangered Pigmy Possum.

So, it seems our species has even greater impacts than expected - lighting, magnetic fields, etc. Maybe we should all wear tin foil hats to protect us from those 'rays'!


"We're all just walking each other home." -Ram Dass
"Be a lamp, or a lifeboat, or a ladder."-Rumi

Dan Allen
pollinator
Posts: 246
101
posted 1 year ago
Streetlights in Florida interfere with the leaf drop on deciduous trees. Sycamores and maples will hang onto their leaves through the winter wherever their limbs are near a street light. It's kind of odd and makes me think leaf drop is more in response to daylength than temperature.