Slugs as compost tea --- the bouquet of fertility?

posted 11 months ago
I have several buckets of slugs drowned in water (when the moon was in Cancer) to use as a biodynamic slug repellent. The project got away from me though, and I opened them four months after I should have used them.

I held my breath while dumping the contents, which I assumed to be useless, fearing the most revolting of stenches. An accidental whiff turned out to smell very much like comfrey fertilizer, which to me smells a lot like horse manure, chicken manure tea, or properly composted humanure.

Is there a smell to fertility? Can you tell if a fertilizer is good, or has gone anaerobic, just by smell?

Looking inside the bucket, there had obviously been a lot of enzymatic or microbiotic activity in the brew. See the beautiful stalactites of what seems to be an iron rich compound trailing down from where the corpses floated and decomposed. Slugs are, after all, little digesters of everything from poop to vegetation.

Maybe I should fertilize a patch of soil with this for a month or so, then send the soil to be tested, and compare it to nearby (upslope) soil for a baseline. I wouldn't know how else to assay the nutrient value of a compost tea.  If slugs could be used as such, that would be some fiiine permaculture function stacking (ESPECIALLY if it also worked as a slug repellent): kill slugs+ make fertilizer+ repel slugs!!!

Or maybe this is among the wackier of my notions.. 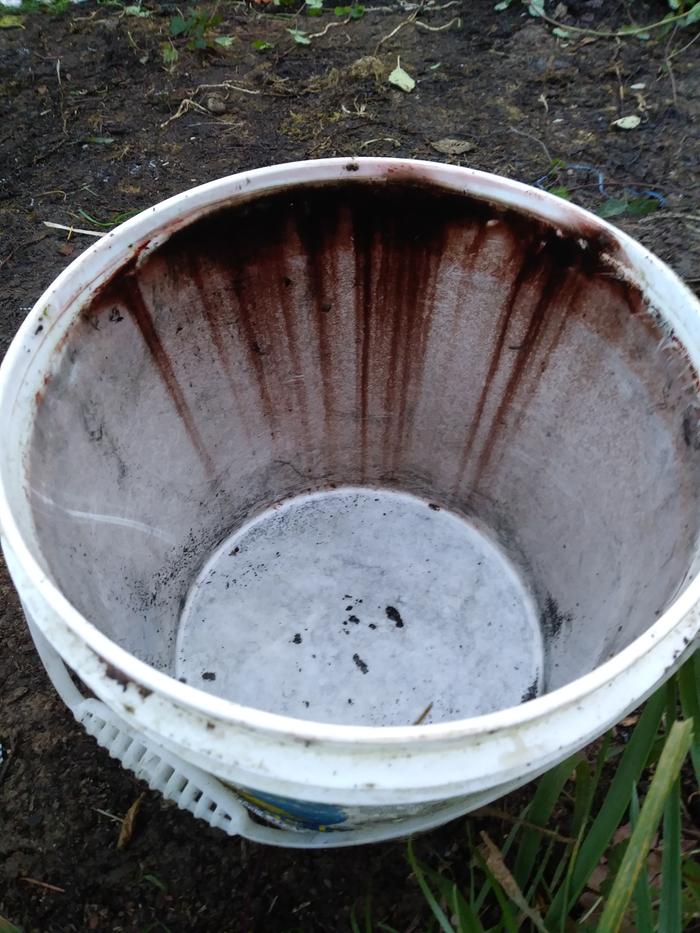 posted 11 months ago
hau Fredy,  you have made some good questions to go with your slug project outcome, I give you Kudos on that.

So, odor is indeed a good indicator of suitability and it can be extrapolated to include fertility. If it has a revolting or repulsing odor it probably is not something to add to your soil.
Most fertile soil will reveal a complex odor profile with many layers of smell. If you have ever smelled the soil from a swamp, you know what not good smells like. (putrid is a mild word but fairly accurate in description of swamp muck)

I'm not sure the residue in that bucket is iron, that would take chemical testing to identify with certainty.

I would definitely like to see you experiment with this stuff on a small patch of soil.
Take really concise notes and photos from before the first application and at weekly intervals for about 3 months after you have completed your applications so you can determine the staying power of your slug solution.
Notes and photos of the soil conditioning (crumble) would tell a nice story too.
I think you might be onto something really good here and it needs the documentation that a good researcher would do.

It would be absolutely awesome if you took this project up and kept us all posted with updates in this thread.

posted 11 months ago
Thanks Bryant, hope you wouldn't mind giving a little direction on research methods.

I have about 9 gallons of Summer Sluggoo, and it's winter so there will be a lot of rain and less opportunity to make any more. We still have slugs but they're smaller and will probably have different compositions and stomach contents. I guess a Summer, Winter and control patch will be necessary, each a couple of square feet in sandy loam, covered by burlap to prevent excessive leaching from rainfall. I can take notes and pictures as suggested, but should I grow anything in the soil...if anything will grow much this late in fall?

I'm simultaneously reading Dr. Ingham's "Compost Tea Manual" and it's got me thinking that Sluggoo could benefit from a bubbler...and how FREEasy it would be in summer to make it from comfrey, nettles and slugs. Might have to take her courses at last to do the research properly and read the microbiological slides.

This would be a great time of year to get a feel for how this works, to know how hard to hit it by summertime.

posted 11 months ago
hau Fredy, I like to do test plots of 4 ft. sq. minimum, this gives enough space for 4 areas for sampling with a plug sampler (tube that gives you a core sample).
I agree that getting air into your Sluggoo is a good idea, the air will have deposited many bacteria and spores of fungi on the surface (if it is left exposed to air) which will benefit and multiply when aerated well, adding some complex sugar (molasses) would also be something to trial.

If you want to grow foods, go for it, a cover (something like a row cover) will allow greens to grow, if you are in high snow country you might need a cover called a snow blanket to keep enough heat in.

Good luck, ask your questions, we have lots of well informed folks that will help, including me.

posted 11 months ago
Ok Redhawk, 4 sq ft or more it is! I'll get a plug sampler too.

Eric Fisher's compost tea book is in the mail and I'm still figuring out a bubbler design to make or buy. The original Summer Sluggoo was in sealed, gasketed bakery buckets, which don't breathe at all if sealed properly (though gas pressure from inside can sometimes open small leaks). That's why I expected it to be rank and foul, totally anaerobic.

Little snow here, though last Feb was an exception (20"!). I'm thinking of a cold frame from windows I have lying around so that only water from the soil percolates in; the copious direct rainfall might skew the results. I might plant some test kale because 1) it seems to grow all winter and might especially so in a cold frame, 2) i have tons of seed, 3) slugs love kale seedlings, eating last winter's to the roots, so if they don't it might well be the Sluggoo. The other option is Spanish black radish seeds.

posted 11 months ago
I like your thinking Fredy, and would also follow The good Dr’s advice. The smell you describe in comparing it to horse/chicken manure is one I have come to associate with high nitrogen content. It would make sense because slugs are basically fat and protein sacks, and proteins are nitrogen based (correct Dr?). I would also agree with your idea of aerating their sludge. I feed them to my birds before they ultimately go into tea or on soil as bird bedding mulch, but I would bet their gut contents are similarly beneficial to worm castings directly in a tea.

Julie Wolf
Posts: 38
Location: Tahuya Washington
2
posted 4 months ago
OMG! You are in Mason County WA? Me too!!!  North Mason Co (Belfair/Tahuya). A close by permie person - oh my! AND I am researching DIY NemoSlug (slug killing nemotodes). Your Slug tea would grow these specific nematodes, if they are indeed present native in our soils.
Did you work out an aerator? Did you test your soil microbes under microscope (Elaine Ingham style?)  We want to buy an aerator (havnt even done any research on it yet) and start inoculating our biochar with compost tea.
I like your idea of adding slugs to the comfrey/nettle aerobic tea. Lets talk!

Do you know about slug-killing nemotodes and if they are native in the USA/PNW, Mason Co even better! - what do you think based on your tests??

I want to learn more about slug-killing nemotodes,  if they are native in the USA soil and how to  grow your own (a cost saving vs buying NemoSlug even if I could find it - which I can not). Here is the thread I started on it - with the How to DIY video link.
https://permies.com/t/142460/DIY-Slug-Killing-Nemotodes

Want to connect? Purple-Moose me (aka PM me).

posted 4 months ago
You are correct about the nitrogen/protein connection Ben.

posted 2 months ago
Though I did not conduct proper experiments per the the scientific method, I am cautiously optimistic about the efficacy of Sluggoo as a deterrent.

I am even more optimistic about it as a fertilizer. See the attached picture, where a bucket of Sluggoo left out in the sun grew algae on the side with exposure, and in so doing the algae clearly consumed most of the nitrogen in the bucket, because it had very little odor.

For test group and control group, I planted about 10 each of sugar snap peas, and a dozen each of celery starts.( 30 goldenberries have also been sprayed about an equal number of times, but starting in July. ) The test group was sprayed with Sluggoo 12 times since May. This far in the season, none have been eaten by slugs, although they were kept in a shopping cart to deter slug browsing and only recently planted. None have been eaten by slugs, which on other celery and pea plants have wrought devastation.

Sluggoo has a persistence what you may have laminated the cart and kept them away, so I will update with Sluggoo activity on planted veg. I have found the tackiness of Sluggoo to be a very helpful adhesive for other slug deterrents, like ash and eggshell powder. Combined, I have seen them deter slugs for a couple of days, after which there is very light evidence of browse. A renewed application has prevented this on goldenberries. In most cases, used casually, it has decreased browse on young squash, but not prevented it. I should have laminated the pattypan squash in it this summer!

Watering is at the roots, so as not to disturb the coating on the plants.

A couple of the peas exhibited a reddish coloration where the leaf meets the stem, consistent with the color you see in the bucket there, for a couple days after an application. The color was IN the leaf.

Trials are ongoing, and hopefully more rigorous, especially when slug season comes with the rains.
20200731_183855.jpg 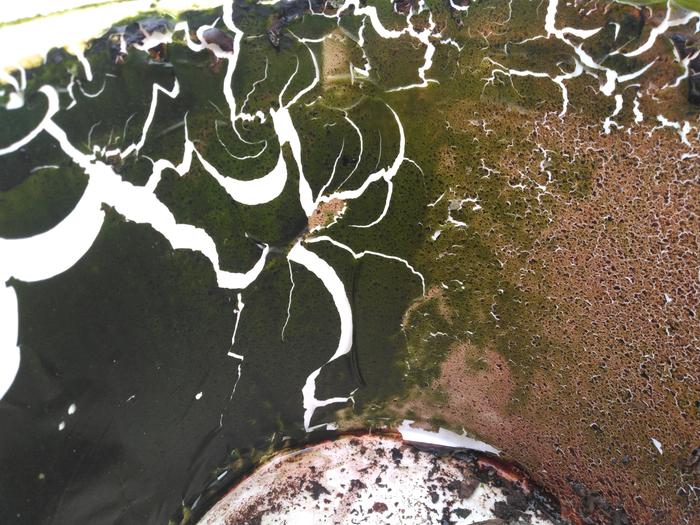 We are overrun with slugs after a very wet June and July. It's insane. They are destroying stuff.

I keep feeding them to my goldfish, but after a dozen they are saying "please pass the Pepto" (in Morse code with their fins).