posted 3 months ago
I have a hillside pitched at 45 degrees. It's covered in trees (maple, cascara, alder, evergreen huckleberries, salmonberry, hazels, holly, swordferns, the odd fir) and scrub brush and gets lots of blackberry vines every year. Last winter an unusually heavy snow load contributed to the collapse of a 20" tree, which left a crater in the sand. I've planted the hill with some stone pine and oak, a couple chestnuts who've done surprisingly well. I haven't removed any trees but I just noticed that erosion is proceeding apace: probably 10 cu ft of sand just disappeared, leaving a formerly flat ledge sloping downward.

Bigleaf maple is an unusual tree for such conditions, in my experience. They have shallow and spreading roots and grow in wetter areas, which makes me wonder if they're the only thing holding the hillside in place...or whether there's clay somewhere under all that sand that's providing for their high water needs. Even odder, they're growing from the midpoint of the hill up.

Because the hill is west-facing and the sun in the afternoon is behind the trees across the street, it doesn't get a lot of light. It will get more when I clear and replant the other sandy hill above it. I could clear many of the trees off (and once I've established my own trees, plan to), but that would worsen the erosion AND the moisture loss. It's challenging to access with water though I suppose I could run a hose and drip systems down to it. Adding organic matter/woodchips to it would be very hard given the steep angle...I could lower a wheelbarrow by rope, then tie it off to a tree.

It would be great to cover crop it to build soil before planting trees, but the competition is too stiff and thinning existing foliage would be too hard. Plus, what likes dry summers on a bed of sand and only an hour of direct sun per day?

I will plant it heavily with Bocking 14 comfrey, which I hope can do well on sand. Fast establishing, drought resistant, takes crowding, deep roots, provides nutrient-rich mulch. I think there's still an unlimited source nearby.

I'm thinking that each tree, planted in material that looks to be 90% sand and 10% organic material, needs top-dressing with 1" of compost, then woodchip mulch, maybe some rotted alder sawdust, then a dose of compost tea. Interspersed with comfrey, I only need a drought-resistant, shade tolerant groundcover that will establish and remain on sand. Thoughts?
Eric Thompson
pollinator
Posts: 451
Location: Bothell, WA - USA
45
I like...

posted 3 months ago
45 degree slopes are very difficult to maintain good access.  I generally consider that too steep to cut a road into, but a walking path on contour can be done with hand tools.  Everything on the slope will be more susceptible to collapse, but that adds some barriers to erosion onto the hill also.  Any time you can straighten a fallen tree along contour into a "shelf" it will trap sediment and organic matter and hold more moisture.

Be careful about clearing too much tree growth -- California is full of sandy hills that were cleared of trees once and lost the mulch and shade to support regrowth.
Bryant RedHawk
gardener

posted 3 months ago
If you are wanting to limit erosion but have use of that slope, you might want to investigate building terraces up the slope.
Terraces have been in use on steep slopes (andes mountains for example) for well over 2 thousand years, they are a lot of work to install but then they limit erosion and give easier access along with growing areas.
The alternative is to leave the slope to nature and live with what she provides.

Jack Edmondson
pollinator
Posts: 288
Location: Central Texas zone 8a, 800 chill hours 28 blessed inches of rain
24
posted 3 months ago
In those conditions in the Pacific NW, I would try willow.  Willow will cling to very steep banks and anchor in sand.  It can stand shade and will soak up moisture moderating the chances of mud slides common in the area.  If you had more time for something to establish bamboo would be a better choice, but needs a few years to establish a root net to be effective.
Fredy Perlman
pollinator
Posts: 261
Location: Mason Cty, WA
29
I like...

posted 3 months ago
Do you suppose it is worth the effort, in organic matter benefits, to rake up the leaves along the hillside into piles, then weight them down with branches so they breaks it down in a given spot, say around the base of a transplanted tree? that would also, I think, buffer erosion in the same area. any excess could be raked up into bigger chickenwire cylinders and allowed to break down into leaf mold , added as needed.

Eric, funny you should say that about using fallen trees/limbs as shelves. I've already used them for that purpose and for marking out where I've planted. Limbs and fallen young maples are abundant for the purpose so I was trying to put them somewhere. Little yellow ribbons tied on each tree and shelves of stacked limbs a couple feet in front of the trees on contour have made the hillside more navigable. The massive amount of mapleleaf mulch (rich in micro- and macro-nutrients!)  will probably slough down into those shelves and build OM, retaining moisture. And lol, our area is full of microCalifornias, where extensive tree growth was removed, causing flooding and erosion...there's a tragicomic story about it just a couple doors down! Perpetrated by Californians.

And Redhawk, because the whole thing is sand, hand terracing would be feasible -- unwanted plants can almost be pulled up by hand, and soil can be moved around into formations. I should read about that original technology of terracing, which was probably not done on sand...but again, how likely is sand to move violently and suddenly, rather than gradually? Mudslides you hear about, but sandslides?

I've since found out Bocking 14 can grow 6 foot roots! Though a running comfrey might mat better (but also get away). No one has any thoughts on netting the soil together with comfrey?

And Jack, I planted bamboo (Phyllostachys vivax and -rubromarginata) at the crest of the sandy hill two years ago, hoping it would fill the area between the hill and the driveway, but also be constrained from escape by both. I've since learned that if you don't water it in summer and provide amendments of OM, it won't expand and may even die. Both plants have sent up many new shoots since I circled them with drip lines. I've also been told they can be trained with urigation to follow particular courses, but it's clear it will be S L O W. Mature bamboos are expensive, so I'm hoping to propagate from the ones I have when they've recovered from my learning curve. I have some willow I could propagate from on the property...it would grow on steeply sloped sand? What is have is growing in silty clay loam. Worth a shot I guess: between the oaks (co-planted with seaberries to fix nitrogen for them), comfrey, willows and bamboo, and the occasional chestnut, a terraced hillside just might work out.

posted 3 months ago
Guess I  halforgot my Edible Forest Gardens, here summarized on the topic of terracing:

I am not going to laser level or a frame this...it's on pure sand. I feel like any certainty of contour I'd have would change in six months. I think a check log terrace combined with tree boxes  (like one sees on suburban streets, but inset the sandy hillside, with a planted tree that has been composted, cardboard, and mulched over) would work best.

I learned that chestnuts really like these conditions and retain sandy slopes well , so I will be using a few more large grafts up the hill, with a second, lower line of defense of overplanted oaks, expecting an oak mortality rate of 10 to 25% in the first two years, and of those 10 to 25% more dying up to seven years.

Over time, these terraces might, through sand subsiding, become flatter areas over developing root crowns. I'm sure planting other layers besides the canopy will be important for this, especially because as my trees mature, existing canopy trees must be removed to allow for light and resource access.

Here's hoping I'll have an encouraging update with pics in five years! ;)

posted 3 months ago
hau Fredy, In pure sand such as what you are describing, any organic matter you can spread on the surface will be very helpful. Adding some aerated compost tea so it can soak down through the mulch layer will get many good things (microorganisms, humus, and moisture which will carry nutrients deeper).
I like your plan, if you run into any "unknowns" let me know and I'll try to be of help.

posted 3 months ago
While planting, I figured out that I lose at least a pickup truckbed worth of soil every year, it runs off the hillside and collects at the bottom of the hill, where you have to power through it to ascend the driveway. the loss is very gradual, but you can see the channels where it flows out. there is still a lot of fungal activity where there is leaf litter. See pic.

these are the boxes I'm making (before and after covering with compost and urigate fertilizer), out of small shower and maples cut in sections, hammered into rough contour with maple stakes about 2.5 feet long. I'm also taking advantage of stumps in the hillside to stack up check logs and pieces of deadfall as barriers to outward flow.
1122191446.jpg 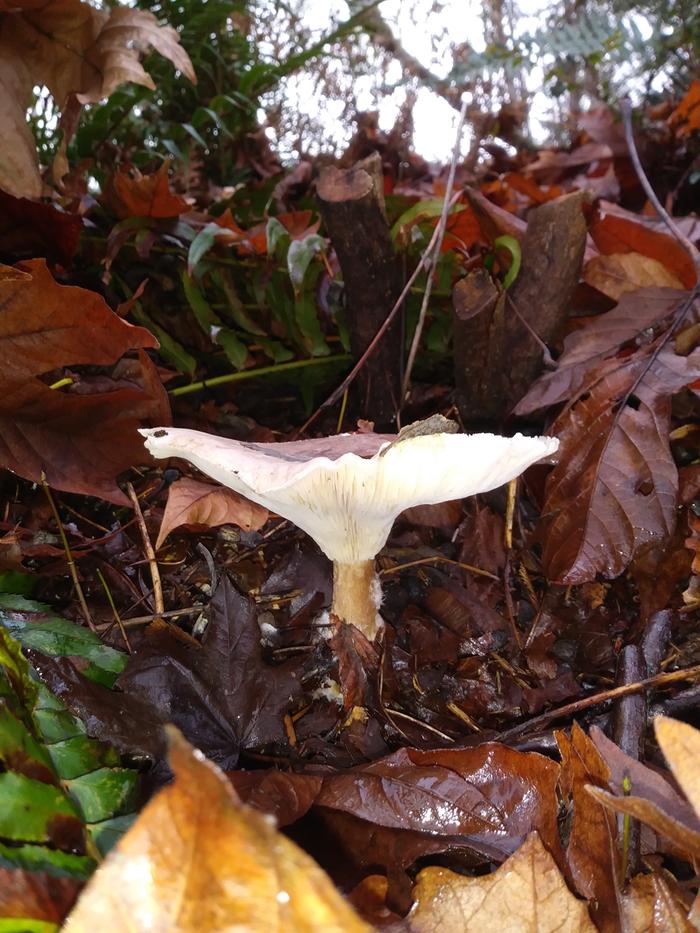 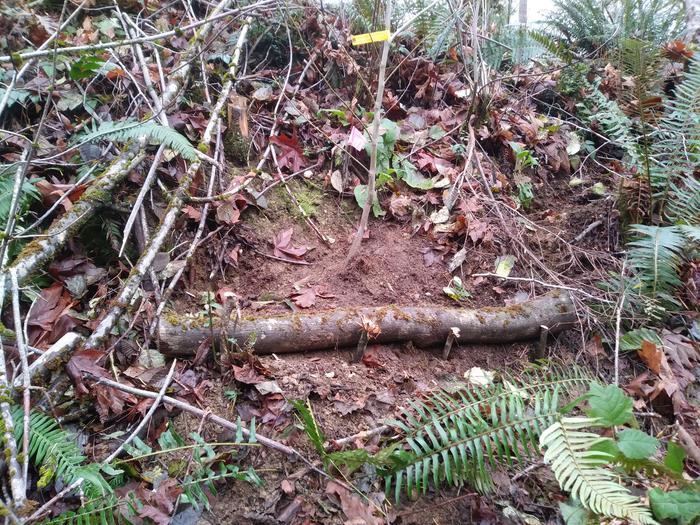 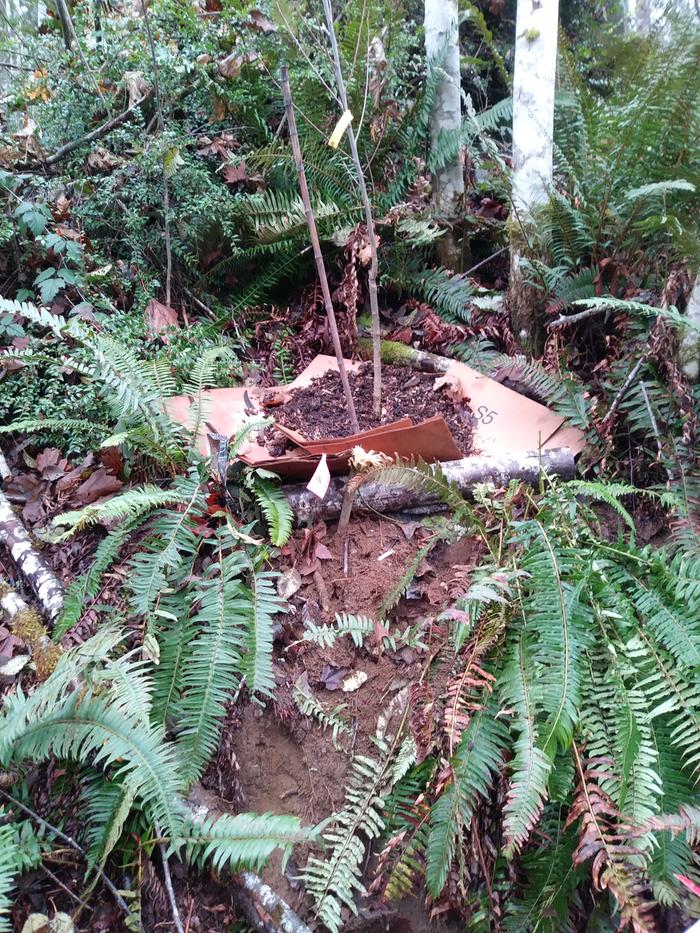