Advice for people new to mud

posted 10 months ago
I am currently driving a 2 WD pretty heavy truck, with an automatic transmission, and I have yet to figure out how to drive it in muddy conditions.

We have a thread here about Winter advice for people new to winter but this is less a winter issue, and more a mud issue. I am used to driving in sand and dry loose dirt, and having a manual transmission, but the slick sticky mud in this part of the country is very different for me. I am also running a heavy 2WD tractor that I have never quite gotten stuck yet, but it's been iffy a few times. I HAVE gotten the truck stuck, first time was on my second day in Missouri. Soil here tends to be a clay mix, not full clay, but enough to make it a mess, with topsoil and rocks mixed in.

When I am going up a slope, do I need to slow down or speed up, shift to a lower gear or stay in drive? I suspect I need to be not stepping on the accelerator and changing the speed in mid-slope, results have not been good when I do that, I lose traction immediately. Worst issues with the tractor have been turning to go uphill, once either drive wheel loses traction, it gets bad.

Advice would be GREATLY appreciated! How am I supposed to be doing this?

posted 10 months ago
If you do get stuck, shift into a lower gear, keep it slow & easy on the gas, turn off any music or extra sounds - you want to hear exactly what your tires and engine are doing. Ugh... bbiab

posted 10 months ago
Hi Pearl;
Lets start with the tractor and uphill slopes.  Low and slow is always better with a tractor. They can flip and they can fatally hurt folks!
We like you to much so, DON'T LET THAT HAPPEN!
I assume your tractor has independent brakes for each rear wheel ?  They usually have a flipper piece on the pedals to lock them together for normal use. Flip that up  and each brake can be independently applied.   As you go uphill if a wheel starts to slip apply its brake  enough to keep it from spinning. The other wheel will receive more power as a result, hopefully keeping you moving up.
Another thing is sometimes a bucket full of heavy stuff helps.
Or backing up rather than driving up,this way your wheels are pulling rather than pushing.

Now about your truck.  My first suggestion, you won't be able to afford and there are the emotional attachments to that vehicle as well.  ... Here goes,   trade it in on a 4 wd gas engine truck.  No not new.
As that isn't an option...
How you approach a clay road in a pickup depends on how scary the road is if you slide off.  Around here if you slide off its down the mountain or/and  into the river. So low and slow and you may very well get stuck.
If you know the road and there is nothing too scary, then use a higher gear ,roll in at a good clip and gently maintain your speed ... the throttle is not your friend in this maneuver.
Of course at the same time that heavy diesel motor up front will be doing its best to drag the front end this way and that... Pretend your Mario Andretti  and go with it... you may even need to give it throttle. 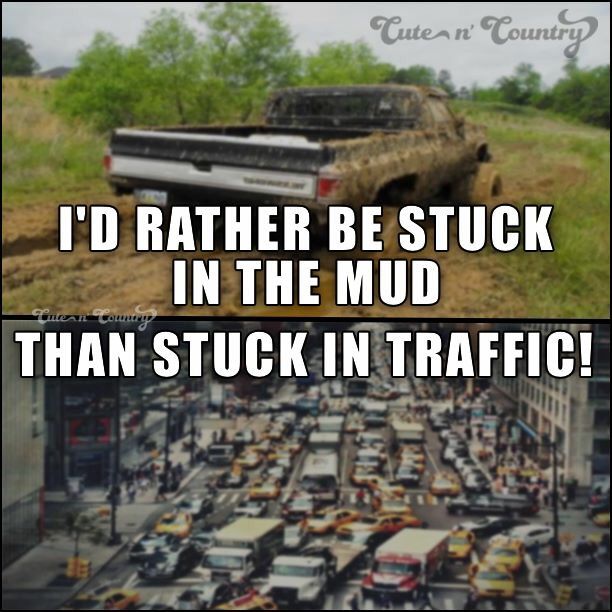 posted 10 months ago
Thomas Rubino: you are correct, I cannot afford a new truck, used or otherwise. Wish I could. 4 WD would help a lot of things I do. My other truck is an 87 Dodge 2WD with a gas engine, and I paid $600 for it, that's the kind of budget I have. No one is going sell anything 4WD that is mostly reliable for any price I can afford. The 96 Ford diesel is a VERY reliable truck, that I have no issues with running it 500 miles if I need to, my dad took great care of it, it's a good beastie. My dodge is awesome, but not currently reliable.

Backing the tractor up hill is an excellent idea!!
And yes, I put a LOT of paranoid energy into not letting the tractor get unstable. That means, though, I'm going 90 degrees up the slope, rather than the diagonals that might lower the angle of slope, but increase risk. I'll leave my tractor down in the pasture till it dries out than risk it rolling. I totaled a truck by rolling it once, that feeling of loss of control and it going over still gives me nightmares. I was hurt very badly in another wreck, but that one gives me the most nightmares. It's not that steep of a slope, and normally it's not a problem, but every so often I don't like what's going on and don't know what I'm doing wrong, as I don't know what's correct to be doing.

Last time I had a serious mud issue, it was a road that came up off a low water crossing, so I had no time to get my speed up, and I had 40 or so landscaping blocks in the back. The sides were not drop off, backwards was though. I sped up the instant I got off that low water crossing, and was doing ok till I had mud under one wheel and rock under the other, and it started fishtailing. I held it, and got up it, but I trashed that road. I called the owners and offered to come back and fix it, they have a Kubota I can run easily. Felt terrible about trashing the road, it's a dirt access to only two houses.

So hitting it with as much speed as I could was my best option there? I was really fearing going backwards, that was the dangerous direction, I didn't dare slow or stop. If I had started rolling/sliding backwards, I was planning to go off the road and hit a tree to stop. That was the safest choice I could come up with. The people who live on that road do it all the time, I tried to ask them how to do it correctly, and they just looked at me, they don't think about it, and couldn't articulate how to do it right. At this point, when I go back there, I leave my truck up top, and call them, they come get me. There has to be a way to learn this stuff. Most people around here don't seem to have problems, I'm missing something, I have no clue what.

posted 10 months ago
Sorry for disappearing, mid post. (Puppies!)
Thomas, thank you for bringing it home! The only other thing I can add is, avoid the situation, if at all possible. Take a different route, even if it's longer. Do the errands or chores another day, if possible. If it's not possible to avoid it, and slow isn't going to get you up the incline, ya gotta go mad max...

posted 10 months ago
I totally avoid going out in any weather, but I need the skill to cope if I need to. I schedule my world around the weather. I have had to have my truck towed out once, and I learned that my tractor will tow it out once. But I'm planning to be here the rest of my life, need the skill. Although I have towed other people out of mud, the Ford is a hauler, it pulls trailers etc, my parents towed a 5thwheel for years with it, and I was with it when it hauled 12 tons of tile 1000 miles, so it'll gear down and drag things out easily. Provided it has traction.

posted 10 months ago
Pearl; A crappy option is tire chains at the bottom idle up the hill and remove them.
I know putting them on sucks and even better... at the top they will be a gooey nasty mess OH JOY... But you will make it up the hill .

posted 10 months ago
I second the chains idea. 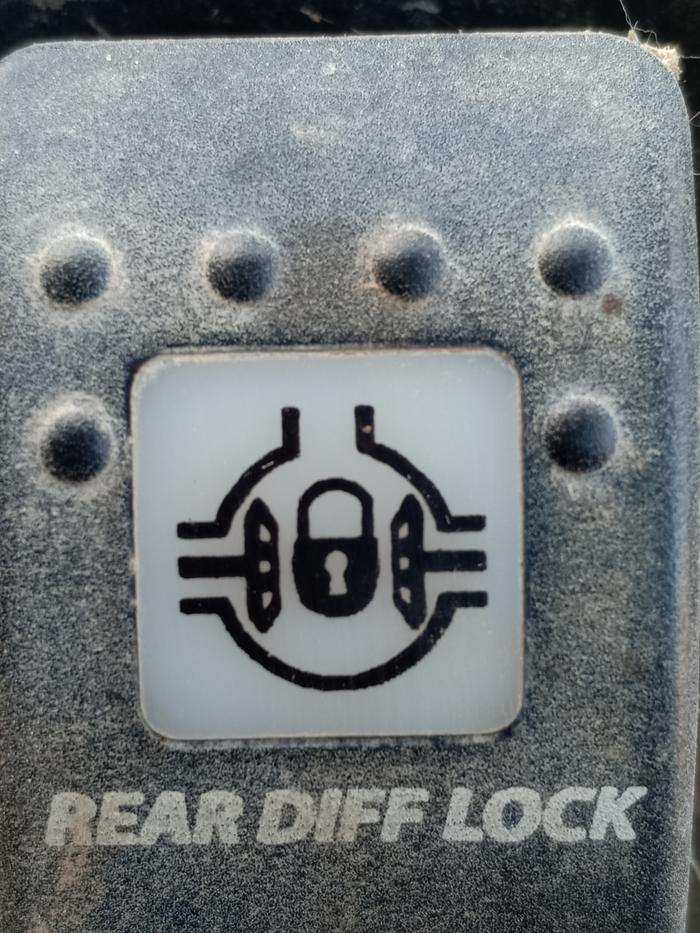 posted 10 months ago
I think I do have a differential lock, I know my last tractor had it... I'll have to look. My tractor is a 1969 International Harvester with personality. Including one side back brake that cuts out, so I keep the pedals hooked together to make it stop on command... So diff lock makes it so the wheels saty together all the time? Is ok to run with it on, or do I just use it as needed? (I wasn't taught to run tractors either.)

I have tire cables, I was not wise when I didn't move all the weird tire chains that my dad had, due to the weight and unwieldiness. I need to find some solid chains. I have the cables. There is a tractor in town that lives at a tractor shop, it moves the broken ones around, it has permanent chains on it. I hate to think what that would do to my soil, I hate what the tractor does already to my soft soil.

posted 10 months ago
Diff lock is only to get unstuck.  Most will not stay in on their own ,you have to hold down the pedal.
If it stayed locked in , turning corners would be a bitch and you would tear up more ground.
Oh and your differential would not last very long either!

Yes Yes on getting real chains.  Those cable ones are for cars on the interstate not pickups on muddy back roads. Worth a try but they might not be enough.
But as we say at the race track... Run what you brung!

EDIT)  Chains for your tractor would be nice but very expensive!    Start with the pickup.

posted 10 months ago
It should stay in diff lock until you touch the brakes without having to keep the pedal down.
Stab the brakes to release the lock.
Also steering is rather limited when it's locked but I've used it in marginal conditions just to get me through...
R Scott
pollinator
Posts: 3647
Location: Kansas Zone 6a
115
posted 10 months ago
Tire chains will definitely work.  Cables are for ice, not snow or mud, but will definitely help.  They should live under your seat or in the toolbox.

You might be able to find a pair of good mud tires, you only need new ones for the rear, for not too much.  Look on Craigslist or Facebook marketplace or a small tire shop that sells used tires.  Lots of times someone will wreck one tire and replace all four (you need to on some 4wd) so you can get two or three like new tires for cheap. Maybe even on rims so you don't have to get the tires remounted.