posted 8 months ago
This is straw mixed with aged and new manure, we'll add a layer of compost on that. It will decay for a month or so, then we plant potatoes in there.
Will that work? Has someone got experience?
The farmer wants to make another one of these, will it be good to grow the three sisters in them? The three sisters i think about are corn, patisson, which are some kind of courgettes or pumpkins and some bean. that climbs and binds the corn together so it won't blow over.
potato-mountain-1.jpg 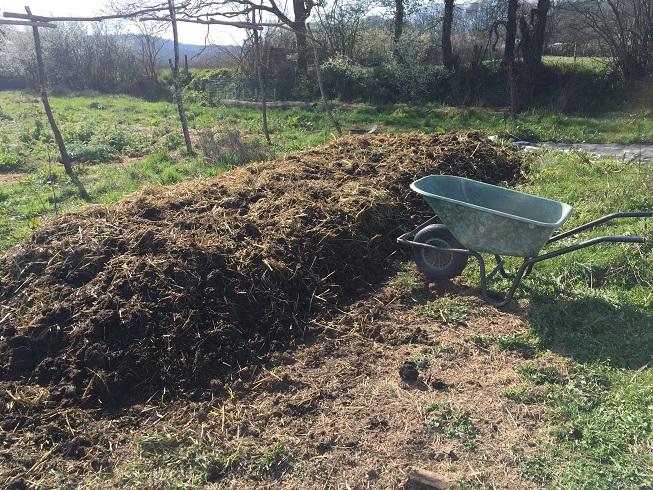 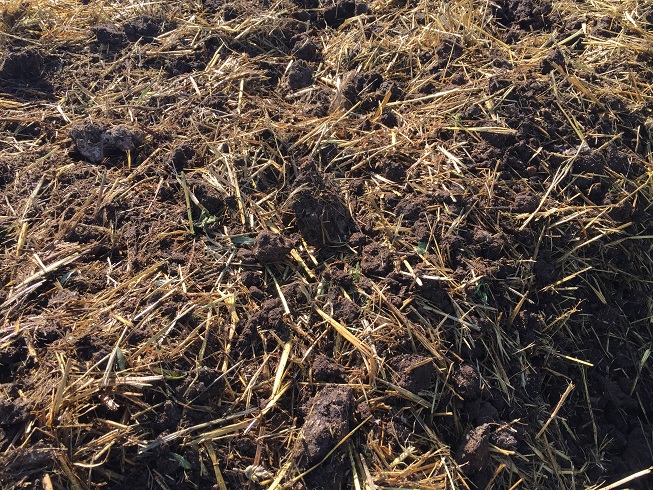 posted 8 months ago
Potatoes when they are first planted do not want to be in water logged environment for long periods of time. The only thing I would worry about is all of that organic matter in that pile will hold on to water for a long period of time. If you plant them and have a wet period of time, the potatoes might rot before they have a chance to sprout.
Also if there is to much fresh manure in that pile it could to hot for your plants as well.


Just some things to look out for I am sure other more knowledgeable than I will chime in.

You don't need a reason to help people

posted 8 months ago
I planted my potatoes yesterday... by dropping them on top of the ground and covering them with hay. I have grown lots of potatoes in plain sand, in piles of leaves, and in tire towers... I have found in my experiments that the more fertile and damp the medium, the less potatoes you get, and the more they get scabby. The one thing that does help them is spraying the tops with compost sun-tea. I used to have a large water jug sitting on a chair I found in the garbage which had compost and water in it. It sat out in the sun for a week or so until I used the liquid and added more stuff. I used a watering can with a fine showerhead type spout and drenched the tops with the compost tea. When I did that, I never had a problem with leaf diseases.

posted 8 months ago
I did 3 sisters last year and it didn't work for me at all.  I planted everything at the same time, and I think it was to early because the corn didn't sprout, so I replanted and long story short the bean smothered the corn.  I also think I planted to much in not a large enough area.  So my advice for three sisters is make sure you plant the corn first and it all is up out of the ground before you plant your beans, which is what I should have done, but didn't research it enough.  Good luck to you.

I agree with Kaleb.  I don’t think I would want to grow potatoes or other root crops in such wet environment.

The good news though is that your bed is going to be amazingly fertile for just about any other heavy feeder.  Tomatoes, peppers, squash, etc would grow vigorously in this environment.

Next year though I think that bed would be perfect for anything and continue to be highly fertile for years.  Age all that fresh manure and I think that you will have some near perfect bedding.

Roy Long
pollinator
Posts: 120
Location: North Idaho
59
posted 8 months ago
Potatoes also need oxygen to the roots for good tuber formation.  You won't get potatoes growing deep in the middle of that pile.  I would suggest breaking into rows maybe 16 inches wide and maybe a foot tall, one the plants are growing you can add a bit to the height if you want, but keep the root system not too far from the outside surface of the row to allow enough oxygen penetration into the soil.

As for direct planting into a mulch material, I have seen it work, though I agree it is much more likely to get waterlogged.  I usually go with a decent soil for the potato and then add some compost on top of that.  Then I keep adding as they grow.

In Iceland and whatnot it was common to grow potatoes in old hay and they went nuts, but the hay was not that broken down and did not water log to quite the extent that will. If you were going a less rotted hay I think that giant pile method work great.  With the slightly rotted hay and mix you have there i would suggest the potatoes have a "layer of soil to be in with this material above it.  You could even throw some of this material on the ground in rows and then throw 4 inches of soil on top of it and put in the potatoes.  Throw another four inches soil over the potatoes and then throw more of this mulch on top of that.  Keep building the mulch up over the top of the rows as the plants grow out.  This will hold in plenty of moisture to help the plants have a steady supply.

One of the biggest issues with potatoes are uneven amounts of water supply, too much at one time and then not enough and then back to too much is problematic.  Slightly too much everyday not actually as problematic, or not quite enough throughout the entirety of the season not quite as problematic.  One advantage to using the mulch there is that it will hold water like a sponge, but it could also increase the likely hood of rot problems.  I always make sure to put my potatoes directly into soil even if it is like this year just an 8 inch thick layer of soil between layers of mulches. 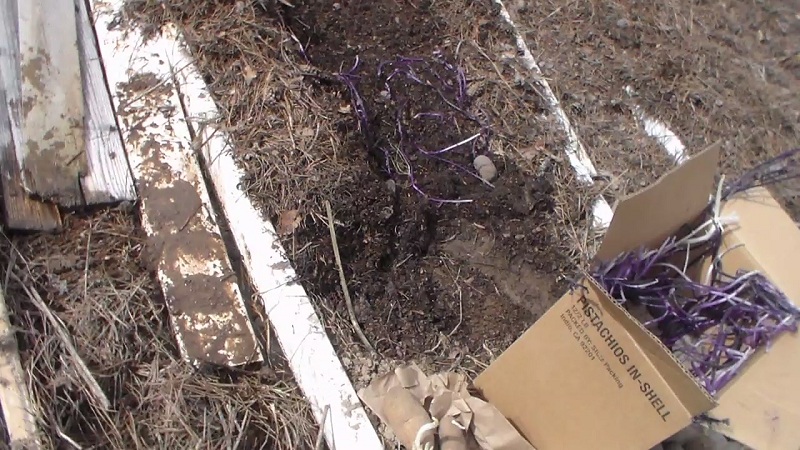 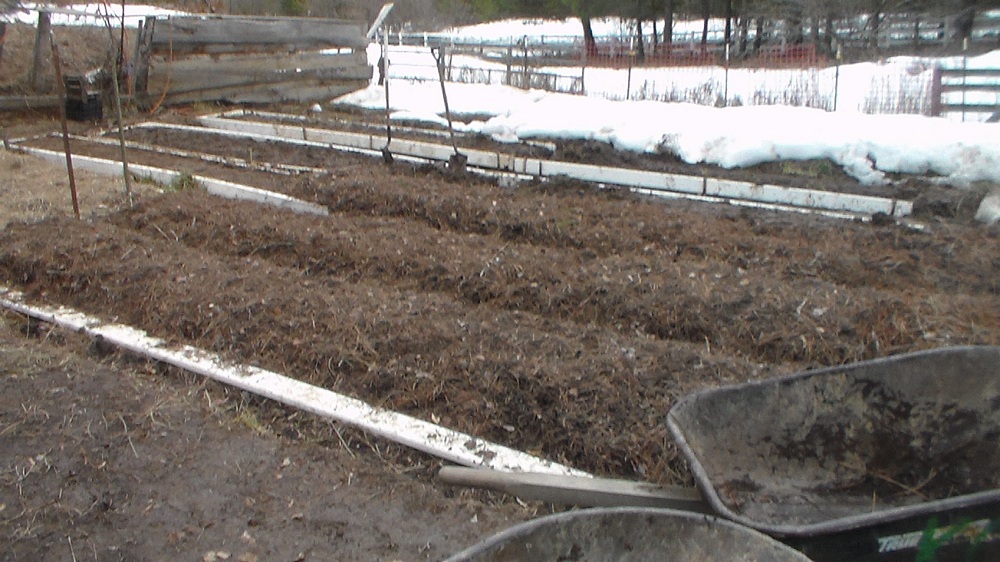 I would have gone with less cover at the moment but we are still getting down into the teens and low 20's at night and still getting a fair bit of snow, so I covered my rows pretty good with mulch to protect from too loww a temperatures.  As the plants get about 10 inches tall or so I will add more mulch to those rows until they are about 18 inches tall or so in the center.
Hugo Morvan
gardener

posted 8 months ago
Thanks for the good answers everybody!

posted 8 months ago
I've never grown potatoes and would like to try sweet potatoes. I'm assuming they are similar in their preferences? What do you all think about planting them in hummus on the edge of an evergreen forest? Or do they need a lot of sun? I don't have access to hay, straw or similar fluffy materials. Lots of branches, brush, clay heavy soil.

William Whitson
Posts: 99
Location: Washington coast
30
posted 8 months ago
You are also likely to have problems giving potatoes such a huge amount of organic matter.  Potatoes evolved in relatively poor soils.  When organic matter is high, you tend to get fungal and bacterial problems.
Eric Hanson
gardener

You would think that potatoes and sweet potatoes are closely related plants, but they are actually have quite different needs, characteristics and growth habits.

Firstly, sweet potatoes grow a vine as opposed to a bush.  Secondly, sweet potatoes just love high heat where potatoes are a cool weather crop.  Potatoes require fairly high soil nutrients, but sweet potatoes can grow on very poor, sandy soil.  A potato plant typically produces 3-5 fist sized spuds where a sweet potato can grow a tuber larger than a football—I have grown them that large before, but when they get that big, you might consider eating paper before eating that potato as it gets really starchy.  Finally (I could go on but I will stop here), while both have their pests, I think everything likes to eat sweet potato vines.  I have planted sweet potatoes several times, but typically the deer get them first.

Sonja, if you want to plant sweet potatoes, they might be the perfect permaculture plant—just protect them from pests.

I love sweet potatoes and 'm somewhat allergic to potatoes, so have to limit them, so the difference makes sense.

I have an area that I think would work well for them. I'm just starting to work on improving the skill there, but I also have a small herd of deer that I'm trying to discourage from considering everything their buffet so I think this year, I'll plant something else.

posted 8 months ago
I would plant squash in it the first year. No sense wasting all that nitrogen. I would also plant a bunch of comfrey roots to be moved in the fall. They should pull right out of that pile, and comfrey loves manure.

posted 2 months ago
Hi, finally i decided to listen to advice from folk here and plant pumpkin, and why then not the three sisters.
It worked ok, despite the summer being extremely dry and hot again. The beans didn't do great, but i've got tons of pumpkins, so thanks for the good advice once more peepz. 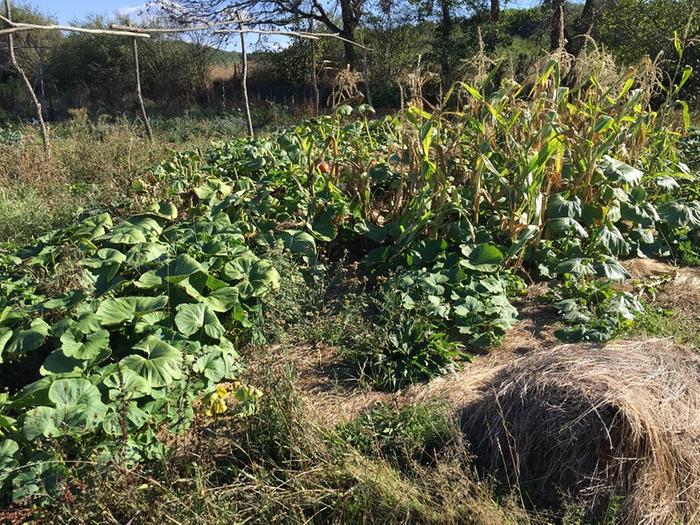