how does a permaculture system lessen fire risks?

Posts: 16
posted 12 years ago
I'm living in southern Portugal at the moment which, like Australia, is one of the greatest areas of fire risk in the world. My question is how does a permaculture system lessen fire risks, if at all. I need to have my facts pretty straight as any who deviate from established planting patterns can come under strong criticism from the locals. One example is I'm putting in a cover crop under some olives, (clover etc) but foresee that the locals may raise their eyebrows. They always clear everything between the trees to lessen the risk of a burn...especially in mid summer.

Obviously a lush, diverse species landscape is going to be more resilient than dry monoculture. But would an established swale system, for example, with its lens of water under the soil, slow the passage of a blaze, or is fire essentially something that happens purely above ground..

posted 12 years ago
Have you seen "the man who planted trees"?

If you have lots of deep, taprooted plants, you will have a lot more moisture in the area.  Plus, lots of ponds on the like so the winter rainwater is kept around all year long.

Susan Monroe
Posts: 1093
Location: Western WA
8
posted 12 years ago
It kind of depends on if you're talking about a localized fire or a firestorm.

A green belt around a house can impede a localized fire, although I'm not sure clover would do much in an olive orchard in that respect.  Bare soil or green matter, neither are actually going to feed a fire.

But the clover may shade the soil enough so the trees aren't stressed for water, which may tip the balance in their favor in case of a local fire.  But that is IF the clover will stay green in the summer's heat, and it may not, as it's mostly a cool-season plant. Additional water is required to keep it green, maybe more than the olives will tolerate. And it doesn't do exceptionally well in heat, even here in the cooler PNW.

Firestorms are a whole other animal.  Firestorms create their own weather, their own winds, and temperatures over 2000F (1093C).  The heat dehydrates everything in its path, and the winds are blowing burning debris miles ahead of the actual fire front.  This is what happened in Australia.  You're not going to prevent it, you're not going to stop it, and the only thing you can do is run or go underground.

As to your question about water under the surface of the soil, I don't think that is going to have much effect on fire damage.  Fires pass relatively quickly, depending on how much there is to burn in a particular area, and the soil reacts much more slowly to changes in temperatures.  Sustained heat will affect deeper levels, but the cooler temperatures from below will also affect the spread of heat from above.

Just an additional thought, and I don't know if it would work with olive harvesting methods.  Iceplants (several kinds), once established, grow quite well with lowered water levels. Many kinds are very juicy, they like heat and full sun. But trampling might kill them off.  As small experiment might be in order.

it sounds as though you have broken a cardinal rule in scientific inquiry! the qestion should be "how does permaculture methods affect fire risk". if you go searching for how it lessens it only you will get totally biased results.

Gwen Lynn
Posts: 736
posted 12 years ago
Ice plants are a succulent that have been around forever. My grandmother used to grow them. They are really easy. Here is a link: http://www.plantoftheweek.org/week260.shtml
ice-plant.jpg 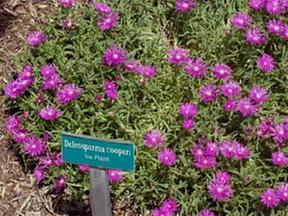 Here are some different kinds:

It stands to reason that the more moisture there is above ground by way of lush green moisture laden plants, the less the risk of fire.

To achieve that, it stands to reason that plants require water to be accessible in the soil.

If your soil at present is parched, and you get your rain in winter, then your plants would benefit from water harvesting and storage.

The best method of storage is in the soil. This will work so long as you have a cover of green plants and trees over that moisture laden soil. This provides cooling and lowers evaporation.

Swales are possibly the best way of getting a lot of water underground quickly. A system of overflows from one swale into the next and so on and eventually into a deep dam can work well.

Bill Mollison at a design course said that swales take 3 to 5 years to transform a landscape to one that is green throughout a summer, to the point of either retarding a bush fire or not supporting one at all.

I would imagine your olive trees would appreciate the extra moisture, but you may be able to moderate this with a planting of perennials herbs and annual vege crops to provide a symbiotic relationship. I am sure others would be able to give you information about this.

Dare to be different. Best of luck.

posted 12 years ago
What "petrus" said.

With "The Man Who Planted Trees" (based on a true story), the taprooted trees raised the water table, laid down a heavier dew every morning, and shared moisture with other plants via mycelium.  More moisture means reduced fire risk.

Having a collection of ponds/swales might not be a bad idea either.