posted 8 years ago
Finally! I have a basket of multi-coloured eggs.

I'm trying to establish a strain of 'rainbow eggers' by introducing Marans and Cream Legbar genes into one of the local Portuguese landraces, the Pedrez, which is barred. I'm aiming at a dual-purpose breed which lays a mixture of different egg colours and goes broody occasionally. And I think I'm finally starting to make a big of headway!

posted 8 years ago
Wow, those are spectacular!

Posts: 3999
Location: Wellington, New Zealand. Temperate, coastal, sandy, windy,
103
posted 8 years ago
Burra, how do you find Marans for temperament and meat?
I made my mum get some for those beautiful dark eggs, but if they laid they were either average brown or hidden, the meat was very dark and nigh-on inedibly tough, the birds were "nuts" and they and all their progeny insist on roosting in the fig tree, rain or shine.
I assume the breed's very close to some wild ancestor? Or maybe Mum just got some extra-out-there chooks

posted 8 years ago
Well at the moment we only have one, single, solitary Maran, a hen. We've tried several times to import the eggs and hatch them out, but only ever managed to successfully hatch one.

This is her (the one on the left!)

She's called Twinkle Toes in honour of her bent toes, which I suspect is due to a vitamin or mineral deficiency in the parent stock. We've had similar problems if our breeding stock don't have access to enough fresh grass, so during the height of summer we generally feed a vitamin supplement if we are trying to hatch eggs, which seems to sort the problem out. Twinkle Toes has quite a reasonable temper, but an example of one isn't much to go on. We used to have Marans when we were in Wales and found that they would generally start off ok, but with time every single cockerel (rooster) turned nasty, and as they were quite big, meaty birds and we had a small child at the time we decided they weren't the best choice as a family bird. We did try to select the gentlest males from a batch, eating them in turn as they turned nasty, but we never got a strain we were happy with. The females were always ok though.

A friend of mine used to keep Marans many years ago in France and she always said they were nasty, without exception. I always found the meat to be excellent. But I think that breeds can vary tremendously and each breeder is going to add their own 'stamp' the birds they breed, and unless a very close eye is kept on breeding for type then that type is going to vary generation by generation. And there's also a very good chance that a lot of cross-breeding has been happening with wilder types with darker meat and not-so-dark eggs, which I suspect is what has happened with your Mum's chooks.

I always used be very concerned with 'purity' in breeds, but over the years I've mellowed a bit on the purity and become more concerned with genetic diversity and suitability for purpose and am far less keen on the idea of never adding new blood to the breeding stock, so long as you keep selecting for the traits you want.

Alison Thomas
pollinator
Posts: 933
Location: France
10
posted 8 years ago
Yes Burra that basket looks good. We have a similar one - greenish Indian Runner duck eggs, beige with a slight speckle Muscovy duck eggs, goose eggs (LOADS), and a lovely array of brown, white and speckled eggs from our 7 hens. I love doing the Egg Talk for our WWOOFers.

We have 3 Marans - all hens - and I have to say that these 3 have the sweetest temperaments you could wish for in a hen. We've never had a cockerel as folk told us that they get aggressive and we have young children. Currently we're keeping the chickens for eggs only so I'm afraid that I can't comment on the meat side of things.
Irene Kightley
pollinator
Posts: 470
Location: South West France
142
I like...

posted 8 years ago
We have a few Marans too. 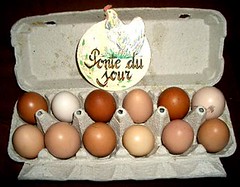 They're very good mothers (The chicks in the photo are adopted eggs raised by a Marans hen) and a bit aggressive when they have chicks - which isn't a bad thing. 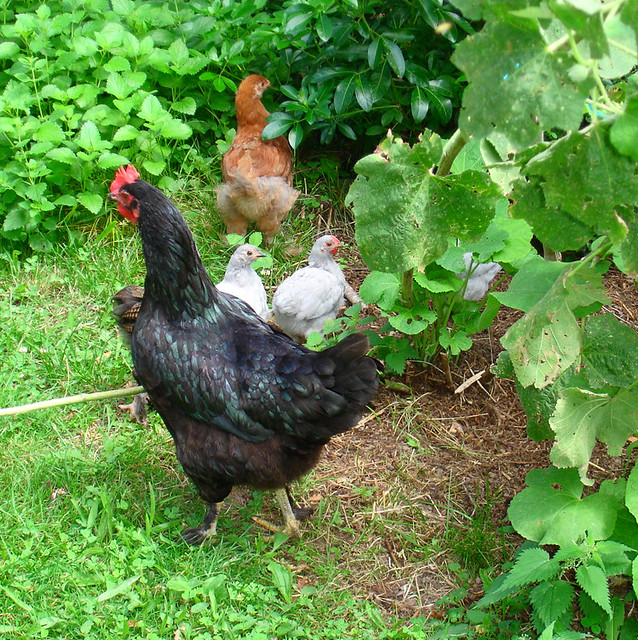 We find the meat a bit hard but we're comparing it to Orpingtons which have really nice meat.

Posts: 3999
Location: Wellington, New Zealand. Temperate, coastal, sandy, windy,
103
posted 8 years ago
By the way, I've realised those chickens I'm thinking of are Welsummers, not Marans. I got myself confused as they are also famous for their very dark brown eggs. Doh. Nothing about all their other...interesting characteristics online though; I think they had some dodgy breeding as Burra suggests.
It's the legbars that have the green eggs, right?
I haven't had any experience raising auricanas, but they lay some way-out eggs. Lilac, concrete grey, powder blue...
I used to have Japanese quail, aka Coturnix. Now their eggs are cute.

posted 8 years ago
The violet chicks in the second photo are Araucanas, eggs which I kept in my backpack for three weeks while I visited Scotland. The birds didn't last long though unfortunately, they were tiny and couldn't run or fly fast enough so the fox got them.

The huge orange chick turned into a handsome Orpington cockerel and he's still around. 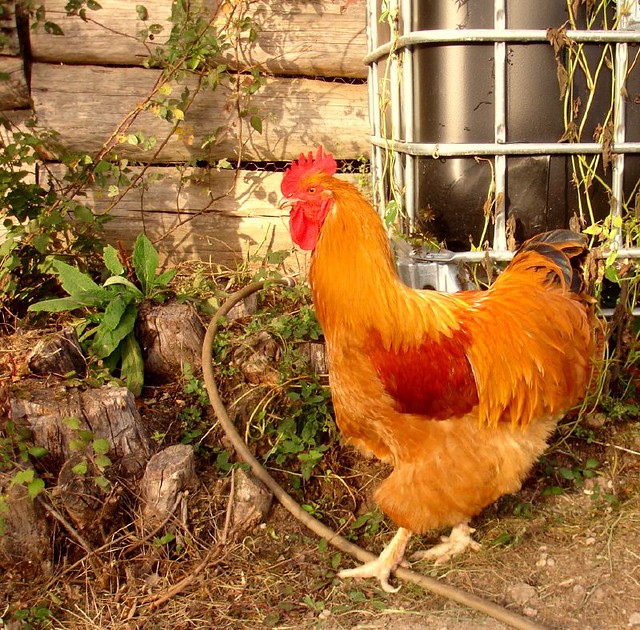 Here are a batch of his offspring 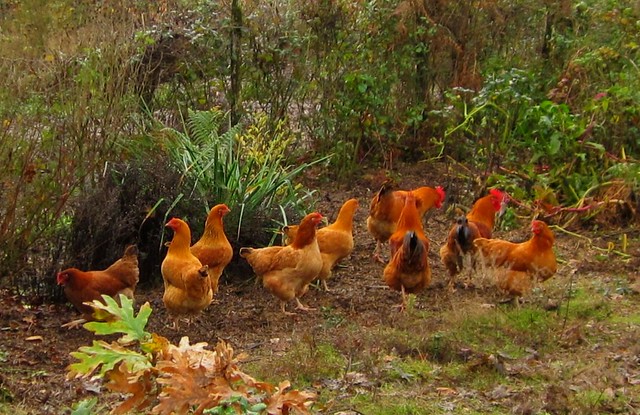 I'd like to have small more delicate chickens but until we fence our place it's just not fair on them as they're free-range and easy prey for the fox.

Alison Thomas
pollinator
Posts: 933
Location: France
10
posted 8 years ago
Irene, how does your beautiful garden survive with so many chooks roaming about (I have in my mind that you have about 50 free-ranging???) The minute I plant seeds or young plants they are scratched out by our 7 - grrrr. This year I was wiser and left the old stems on my plants until the new growth was WAY up and hopefully they won't now get scratched into oblivion.
Irene Kightley
pollinator
Posts: 470
Location: South West France
142
I like...

I'm sure we've discussed this before in the forum but I've looked and can't find a link.

I have a big garden which consists of smallish parcels of growing space for classic veg (and flowers) in clearings between trees, shrubs, climbers etc. The chickens have a lot of space to scratch and make dustbaths and all I do is make it difficult for them to disturb my plants when they are vulnerable, so they go somewhere else.

Here's a link to a collection of photographs which describe the kind of things I do to dissuade them :

Achaeos Salisbury
Posts: 2
Location: Northeasy Oklahoma
posted 8 years ago
You cannot create a breed that lay multiple colors of eggs. There are a number of genes involved and you will soon have no Blue eggs, no white eggs and no dark brown eggs. The green types may hang around and medium to light browns. But if you could eventually lose the green ones as well.
I love my Welsumers and would never pollute their gene pools with mongrelization. Ths is a good breed and those dark and speckled eggs are too valuable to allow the blasphemy of mixing other breeds into their flock.
I also like to have TRUE blue eggs. Green eggs are actually from birds that carry the blue eggs genetics but are polluted with mongrelized genetics. Araucanas I have bought in the past are usually polluted. This year I intend to begin the arduous process of selectively breeding a flock that breeds true for blue egg laying girls. It could take several years.
A truly striking dozen of eggs is one which does not have all the in between colors. Welsumer eggs, next to pure whites and blues causes the "ohhhs" & "ahhhs".

The government is my enemy, murderers of a million Americans. It is well past time to refresh the tree of Liberty.

Bet you I can!

Jeanine Gurley Jacildone
pollinator
Posts: 1459
Location: Midlands, South Carolina Zone 7b/8a
34
posted 8 years ago
I love a basket of different colors of eggs. When I sold eggs the customers always seemed to like it too.