A rain stick for your drain stick

posted 11 months ago
I've given some thought to compost toilets and it seems the social aspect is one of the biggest problems.  People just don't like the idea of not flushing, and scooping sawdust out of a pail and dumping it down the chute seems uncivilized to them.  I also wonder if the absence of a sensory input is bothering them.  There's no sound of flushing which people are used to.

I wonder if a rain stick could be the answer? You know, those cacti sold in new age stores where you turn it upside down and beans plink against reversed cactus spikes to make an artificial rain noise? You can make them out of PVC and give them a convincing faux wood effect.

What I'm picturing is a hopper of some sort mounted to the wall, which feeds a rainstick, which feeds into the toilet drain.  Fill the hopper with stove pellets.  Fashion an elegant flush handle that opens a flap in the hopper and dumps a handful of rain beads down the rainstick to make a flushing noise then deposits the wood pellets on top of the solid waste. It seems like this would solve a few social issues, which are not having a pail of sawdust in the bathroom, soothing people's instinct to flush, rewarding them with a visceral flushing experience, and also adding a design element.  I'm sure it has negatives as well, for example complexity in construction, maybe an issue with scents/gasses rising into the rainstick? 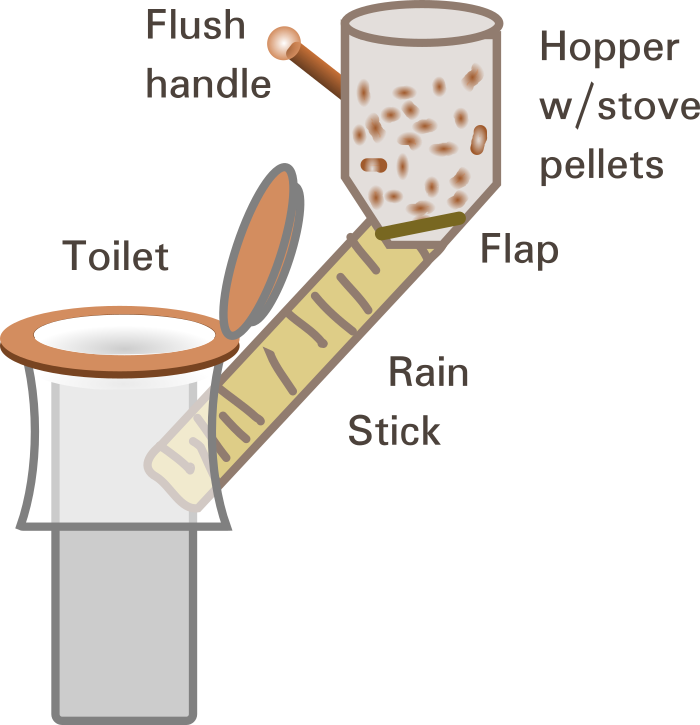 posted 11 months ago
I think this is a fun idea! If the rainstick is a audio cue, it does not really need to be physically attached to the toilet, which could alleviate issue of moisture/clogging.  What I mean is, the sawdust "flusher" could have a rainstick hanging off the side which is agitated by the flusher handle so taht it makes a noise, but serves no other function.

posted 11 months ago
Very cool idea Rob!
Some of the earliest "flush" toilets deposited drug covering over the deposit.
The addition of a rain stick sound is a great innovation.