Repair a Flat on the Rear Tire of a Bicycle - tool.sand.backtire PEP BB

BB tool care - sand badge
posted 2 years ago
This is a badge bit (BB) that is part of the PEP curriculum.  Completing this BB is part of getting the sand badge in tool care.

Sometimes bicycle tires get flats and they need to get repaired.

Here's a video on how to remove the rear wheel of your bike so that you can then repair a flat tire.

From the video description:
"Save yourself an embarrassing moment and learn how to quickly remove your rear wheel."

To get certified for this BB, post the following for a rear tire:

- Before pic of flat tire
- Action pic of repairing a flat rear tire
- After pic of inflated good tire
- Describe what the tire was repaired with
COMMENTS:
Inge Leonora-den Ouden
pollinator
Posts: 2393
Location: Meppel (Drenthe, the Netherlands)
742
I like...

posted 1 year ago
When I have a flat back tire I don't remove the wheel. On my bicycle wheels are difficult to remove at home (or somewhere along the road). In my opinion it isn't needed to remove the wheel to fix the hole in the tire ... 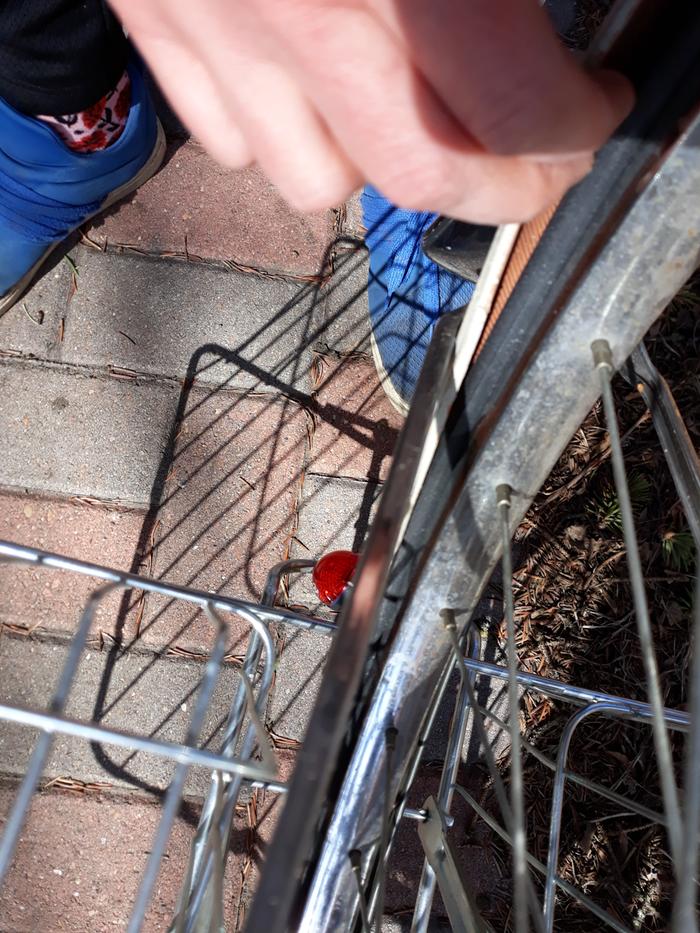 Tools for taking wheel on and off 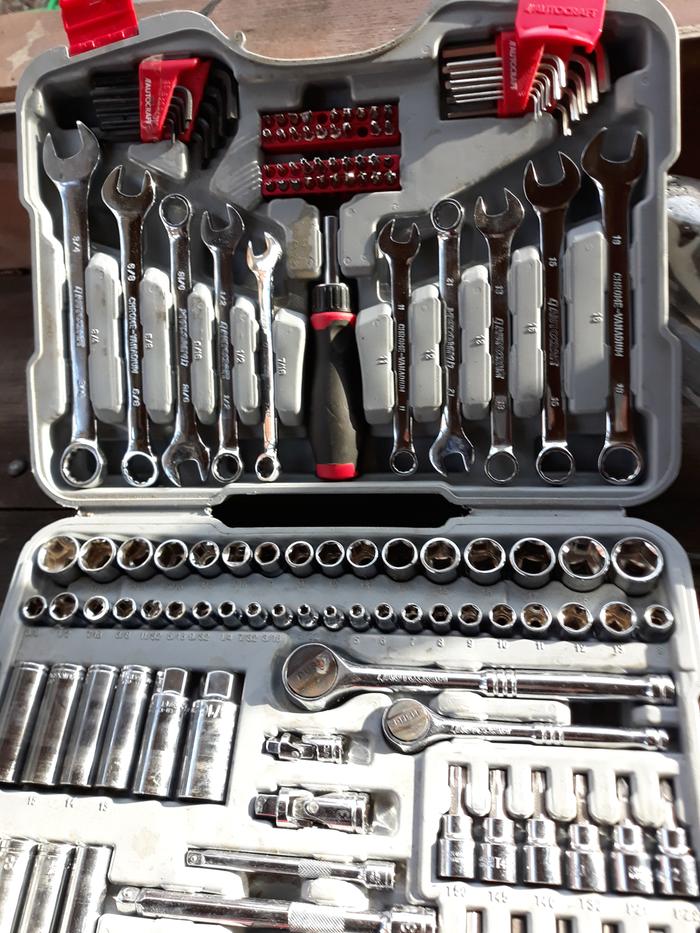 Inner tube was really split open, needs to be replaced.. 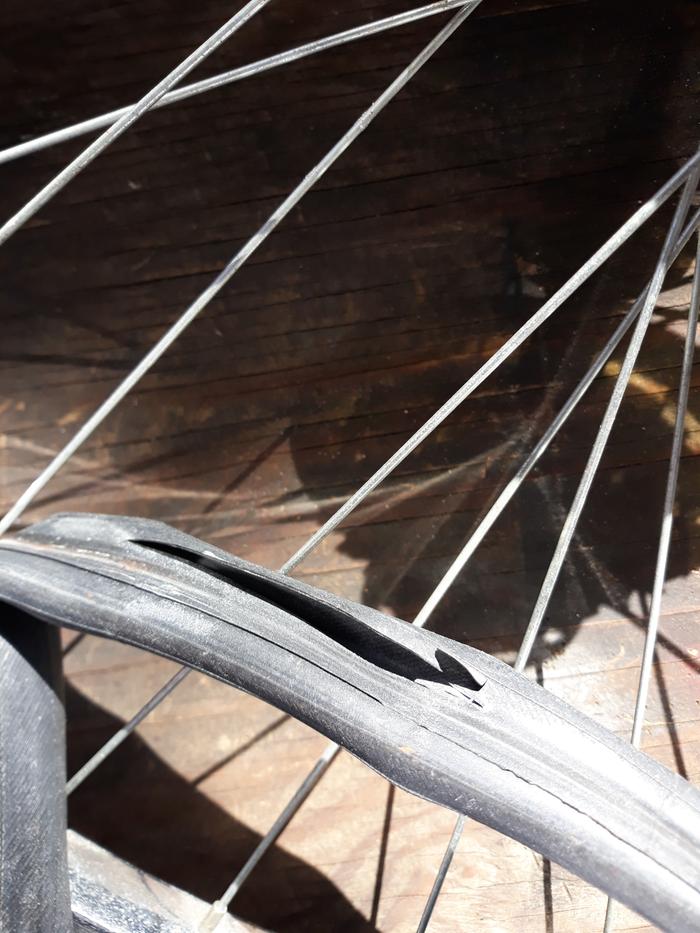 Took the opportunity to clean the gears a bit 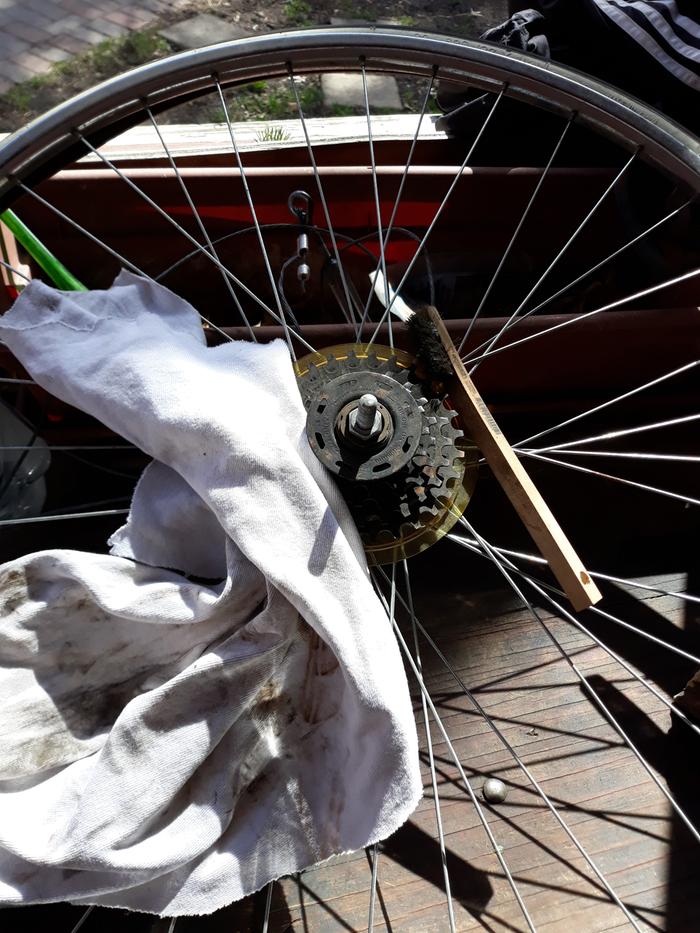 New tube next to rim 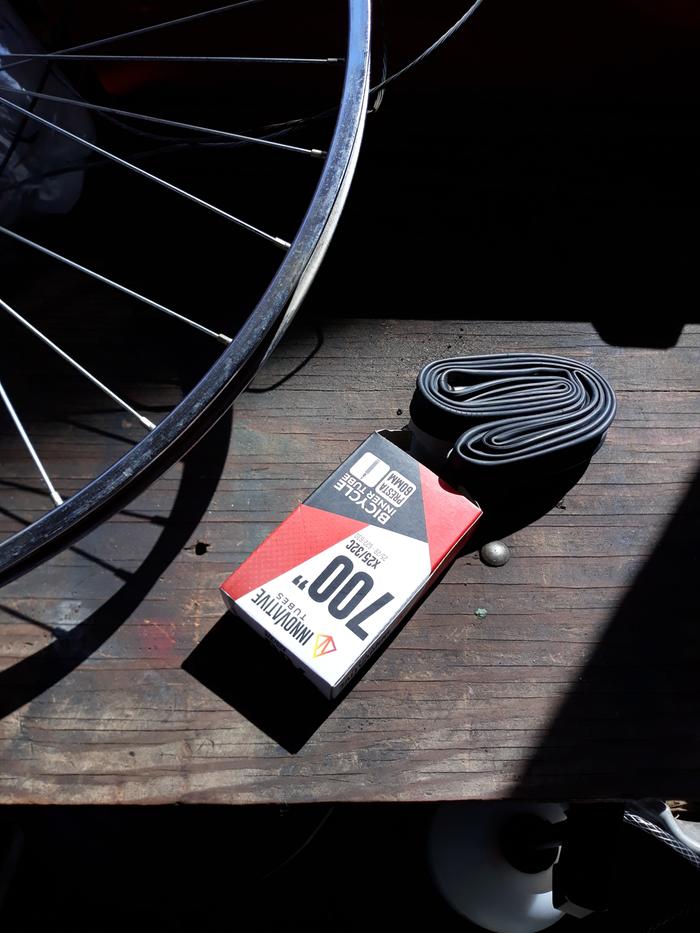 All back together, pumped up and ready to go. 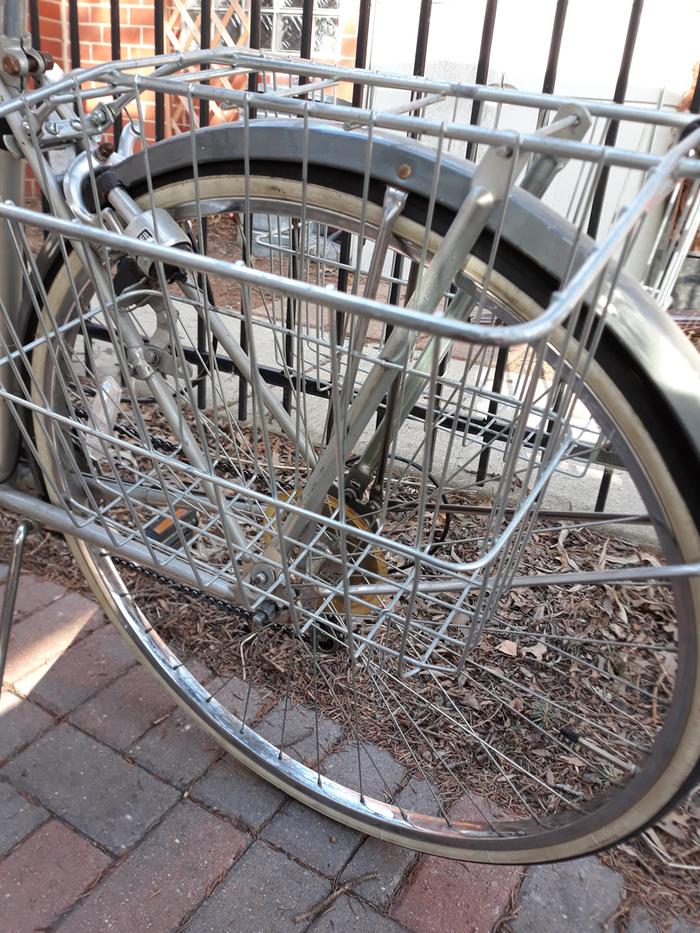 posted 1 year ago
Approved BB submission
I was wondering when I'd get a chance to do this BB...

posted 1 year ago
Approved BB submission
Here is my submission for the Tool Care - Sand - Repair a Flat on the Rear Tire of a Bicycle BB.

My sister and I each have a bike that has been in the shed for a while (I haven't ridden in a decade - my sister rides every summer).  All four tires were flat so I started by filling them to test tube soundness then washed both bikes and degreased the drivetrain.  The rear tire on my bike held air but was apparently overinflated and blew out the bead.  I inspected the rim for damage (none found) and replaced the tube.

A tech trick: inflate the tube with about 10-15 psi then insert it into tire.  Put tire/tube on rim then inflate while making sure the bead seats.  40-65 psi is recommended for my tires.  I inflated to about 50 psi.

To document the completion of the BB, I have provided the following:
- Before pic of flat tire
- Action pic of repairing a flat rear tire
- After pic of inflated good tire
- Describe what the tire was repaired with
1.JPG
2-new-Tube.JPG
3.JPG
4-installing-new-tube.JPG
5-assembling.JPG
6-inflating.JPG
7-done.JPG

Nicole Alderman approved this submission.
Note: I hereby certify that this badge bit is complete!

posted 1 year ago
Does replacing an inner tube count as a "repair", or does this BB require using a patch kit to repair a tube?

Unfortunately I missed the chance to do this one recently. My daily commuter got two flats last week, having not had one in 9 months. 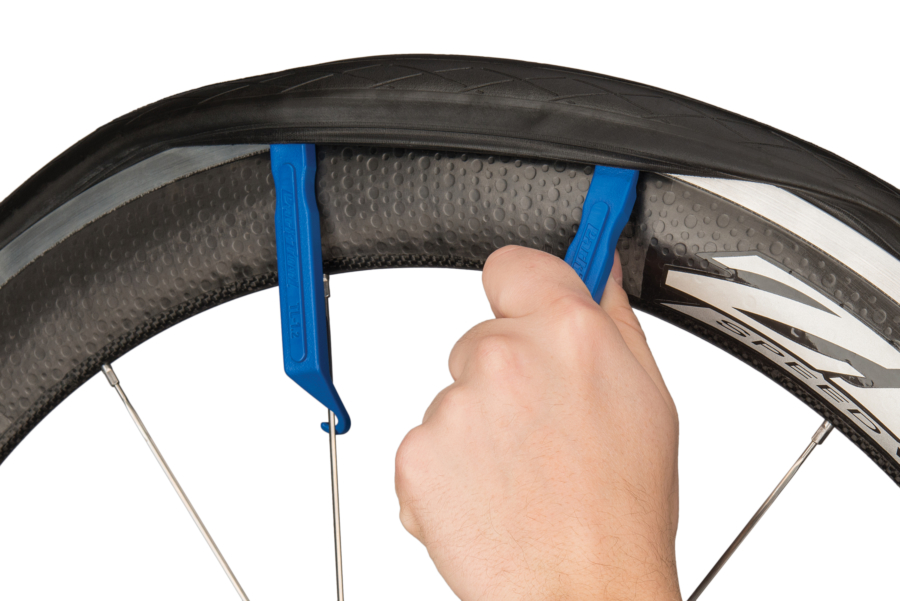 Michael Cox wrote:Does replacing an inner tube count as a "repair", or does this BB require using a patch kit to repair a tube?


Hi Michael,
My tube blew out and I replaced it ( look at post above yours). My BB was approved, so yes replacing the tube counts as a repair.


I purchased these with my new tube and they work great!

I also got this tech trick: inflate the new tube to about 10-15 psi then insert it into tire.  Put tire/tube on rim then inflate while making sure the bead seats and the valve stem is parallel to the spokes.

posted 1 year ago
My opinion is replacing the tube is a better repair than a patch. I would approve it.

posted 11 months ago
Approved BB submission
I was initially intending to post/submit this as an oddball BB but I'm thinking now perhaps the rear tire repair is a better fit.  Most of my flats happen when I'm out on the trails/roads and since I don't do cell phones I don't get to photograph the on site repairs.  :)  This is actually a repair after the trail repair to hopefully prevent another flat.  If this is deemed not applicable for this BB that is fine.  I'm sure I'll get another flat at some point.  (I recently decided to start buying my tubes by the half dozen since I seem to go through them so often.)

The cause of my flat this time was the valve stem getting cut by the metal rim.  This is not the first time I've had the issue.  What seems to happen is that for some reason even though I make sure the stems come out straight from the rim hole they end up shifting to an angle.  (Still scratching my head over that.)  Then since I use my bike for actual work hauling stuff the heavy loads can cause the rim to bear down and cut into the rubber tube right at the base of the valve stem.  In my role of metalsmith educator I'm often telling my students to "pay attention to your edges".  I realize this is probably what I need to be doing here myself.  The edge of the stem hole in the rim was fairly sharp.  It seems to me that if I were to file/sand/polish that edge down then it would be far less able and likely to cut through the tube.

So after I fixed my flat and got back home with my load of groceries I took the tire off again, removed the new tube, reworked the valve stem hole in the rim, and replaced the tube in the tire.  It's been several days so far and all has been well.  I'm honestly not certain this will fix the issue, but I can't see why it wouldn't.

The Lord gave, and the Lord hath taken away; blessed be the name of the Lord. - Job 1:21

This bike has had a slow leak in both the front and back tires for some time. Upon inspection, the tubes were cracking from age. I've had this bike for almost 20 years and I think this is the first time I've changed out the tubes. 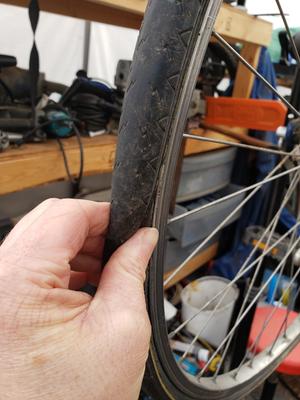 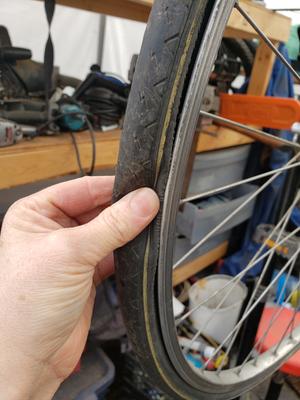 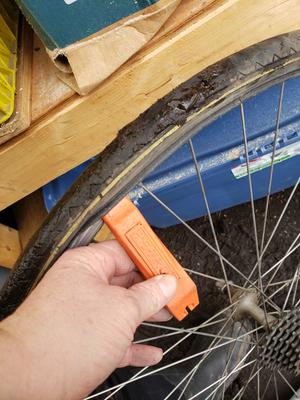 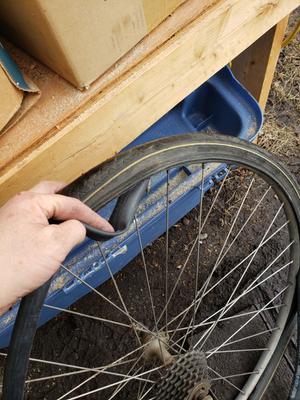 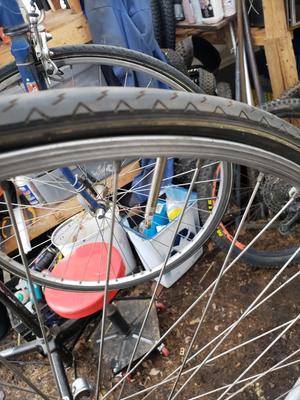 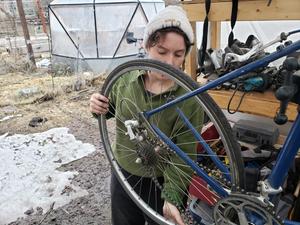 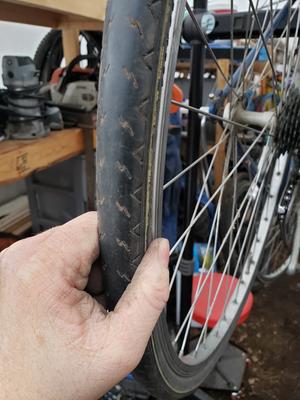 Like my shiny badges? Want your own? Check out Skills to Inherit Property!