BB commerce - sand badge
posted 3 years ago
This is a badge bit (BB) that is part of the PEP curriculum.  Completing this BB is part of getting the sand badge in Commerce

sell your permaculture labor off-site for at least $50


What is permaculture work?
Note, this will probably be expanded on later, however, it needs to be something related to permaculture.


To get certified for this BB, post the following:
- a description of your labour and how it relates to permaculture
- Photos of you doing the work
- Proof that you got paid $50 or more (you can smudge out the personal info, so long as it is identifiable as you)

note:  this could be several different things that all add up to $50 or more.

posted 3 years ago
Approved BB submission
A local farm bought half a dozen sheep off me this winter.  As part of the deal, I would mentor them in sheep care, working with and marketing wool.  The sheep care was included in the price of the sheep, but the wool work was extra and charged an hourly wage.  Like me, they care deeply about minimizing their input on the land, improving the soil health, and finding systems that reduce labour.

I attended their shearing day and taught them to skirt (remove the compost from the good wool), prepare their fibre for the mill.

I also taught how to clean.  Attached is the handout I made for them for that lesson.  The goal is to clean the wool with minimal resources and to create grey water that is safe to use on the garden.

Day one: 2 hours.
Sheering set up.
Skirting and sorting wool.

Day two: 1 hour.
Washing wool - how I do with an emphasis on using as little cleaner as possible (the more soap you use, the more water it takes to rinse it out) 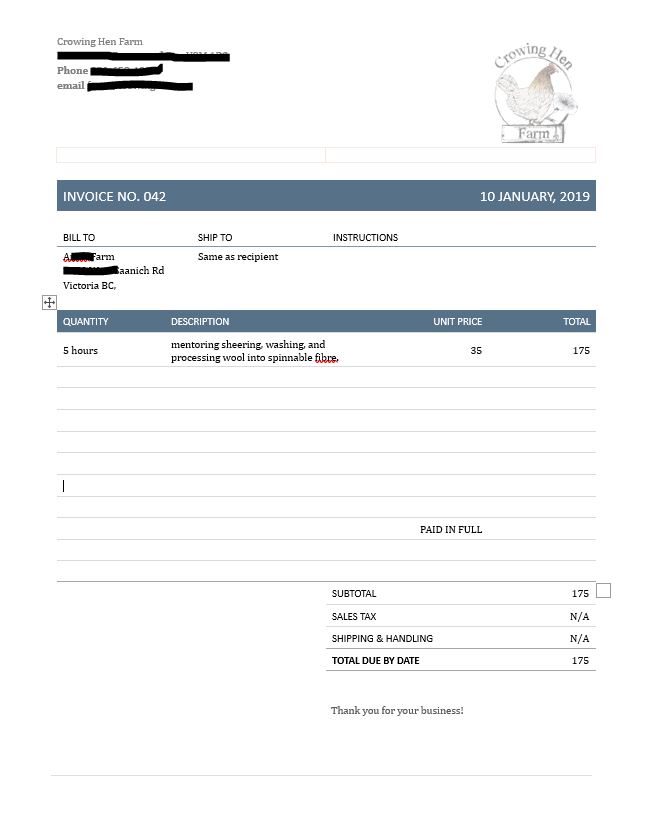 posted 3 years ago
For the teaching part... does creating and selling an online course about permaculture or a permaculture topic count?

Daron Williams wrote:For the teaching part... does creating and selling an online course about permaculture or a permaculture topic count?

Daron Williams wrote:For the teaching part... does creating and selling an online course about permaculture or a permaculture topic count?

Talking with Shawn on the phone about this.   After a bit of discussion, I am making the executive decision that this is to prove to Otis an in-person transaction.    So, no, online stuff does not count for this BB.

posted 2 years ago
Approved BB submission
I taught a class at the local technical college earlier this month on canning applesauce.  It's part of their community outreach and I'm working with the coordinator to bring more homesteading skills to their list of offerings.  This was the first class and it went well.  I was able to do a presentation in one room and then we moved next door to the culinary arts kitchen (humongous commercial kitchen) and we canned up 25 quarts of applesauce.  My focus was to both teach people about safe food preservation but also to show them how quickly they could do it with some special but not expensive gear.  So I think it's permaculture related since I was helping teach people how to preserve their bounty of autumn food in a safe way.  And it was helping build a program to share more homesteading skills with the region.

posted 2 years ago
I was able to sell hugelkultur to some business owners and they have had me do the whole place!  Total sales of maybe $6000-$7000

It began when I noticed they really needed some help landscaping, AND had the "open-minded" kind of vibe that would allow them to consider letting me do "the permaculture".

At first I probably sounded crazy but like I said, they needed help!  And I got permission to use buried wood gardening and eventually, remove the drip irrigation altogether.

The gig was to death-proof these puppies , so I sold them hugelkultur


lined them with black plastic and added plastic bushings on the inside of the drrainage holes.  Blocked off large holes with rectangular scrap lumber (mostly pine) I was able to fit a couple layers of sawed-up scrap planks, and then placed the plants

IT IS permaculture because I don't use or allow use of any bug killer nor weed killer.  I use cardboard under the mulch so the guys agreed to stop using Roundup. as long as no weeds come up.

The stuff never needs to be watered, duh, it's hugels!!  Bigger is definitely better, but small works too. Amazing and such a joy to witness 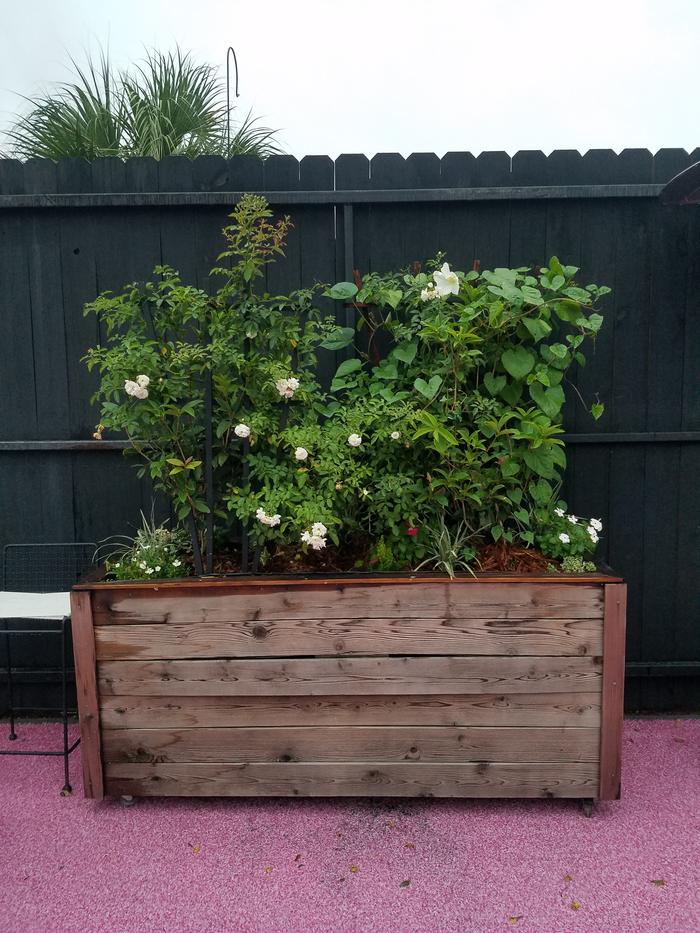 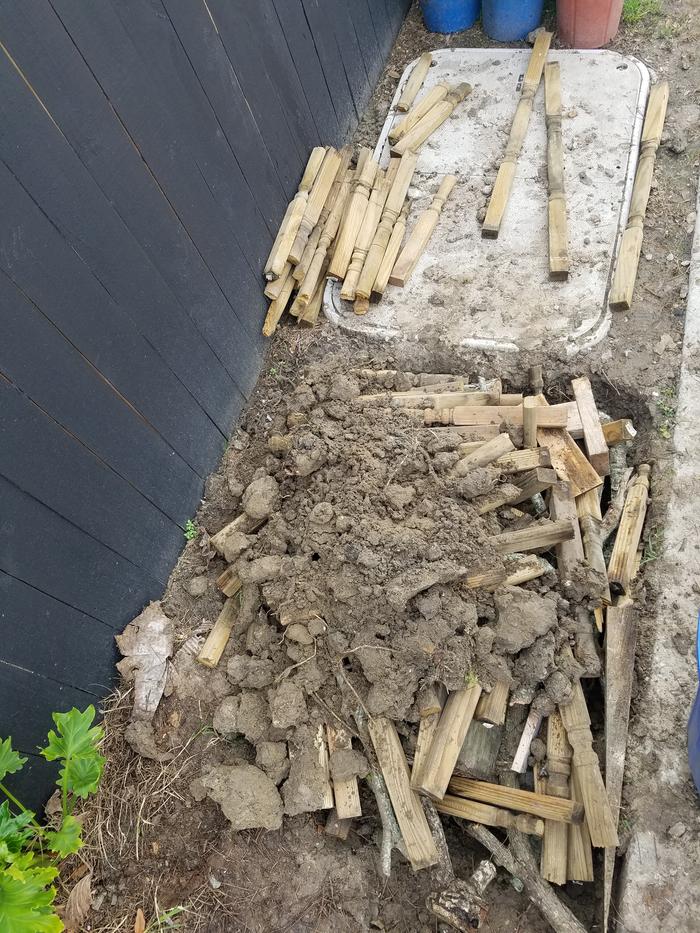 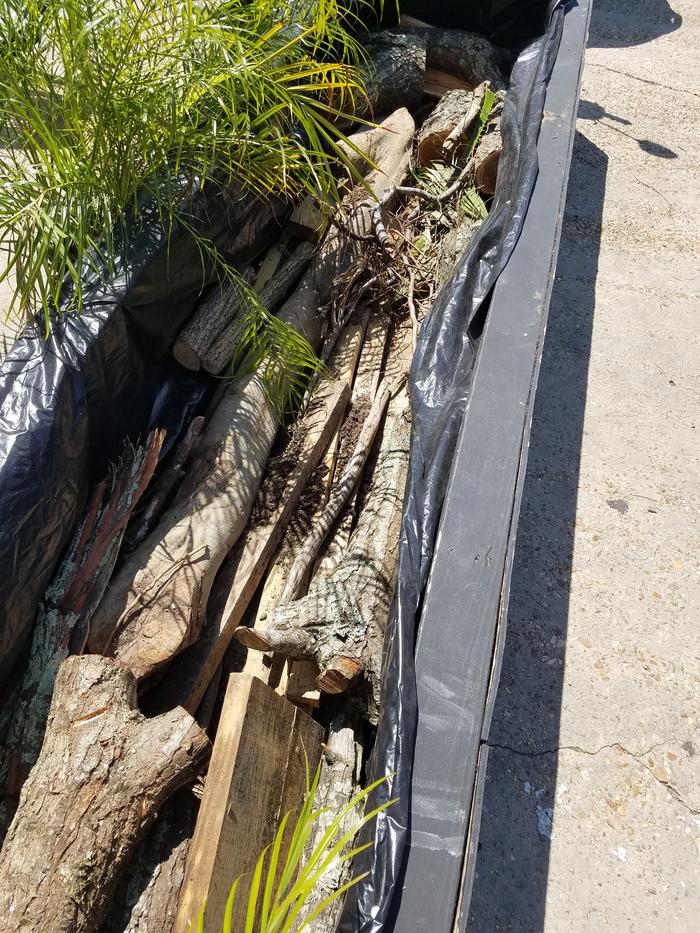 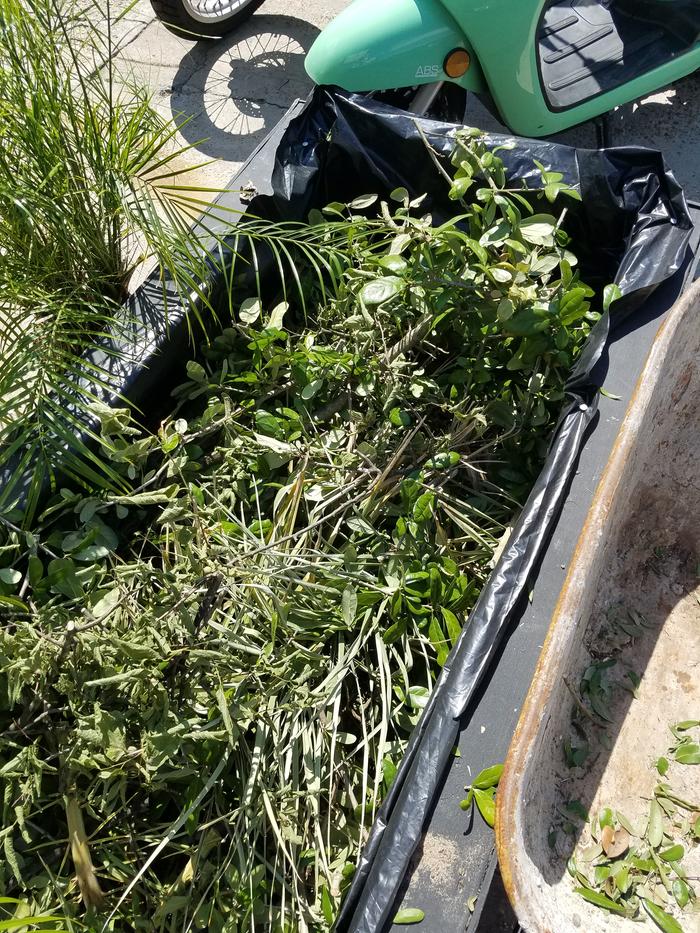 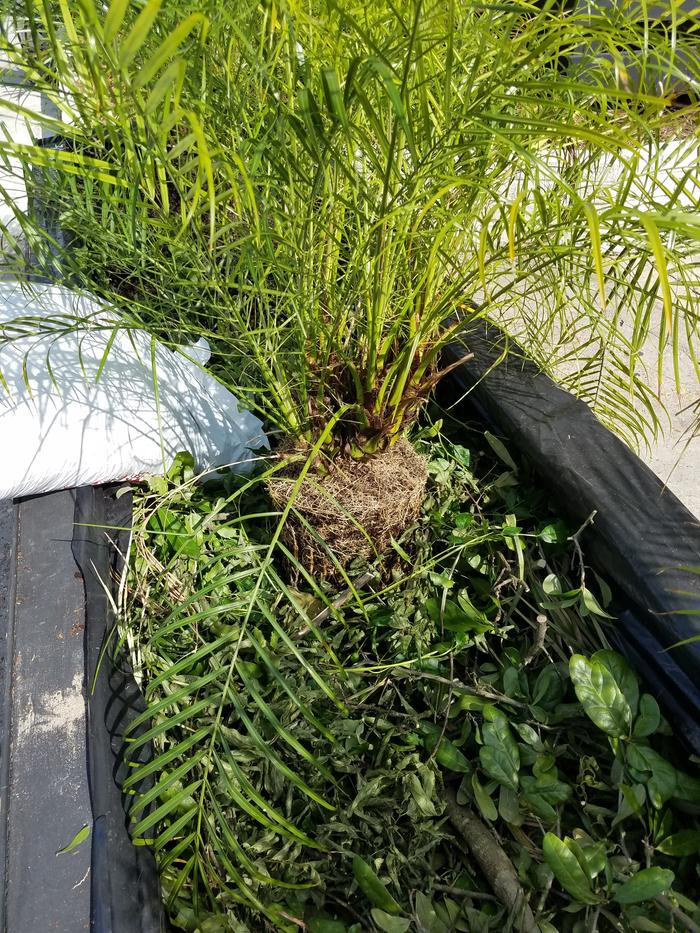 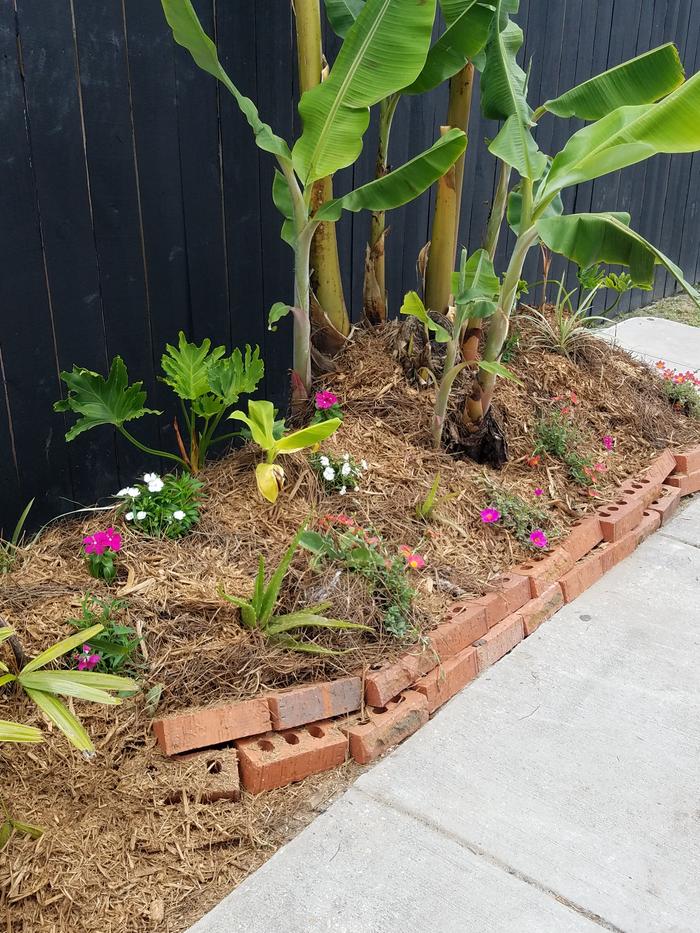 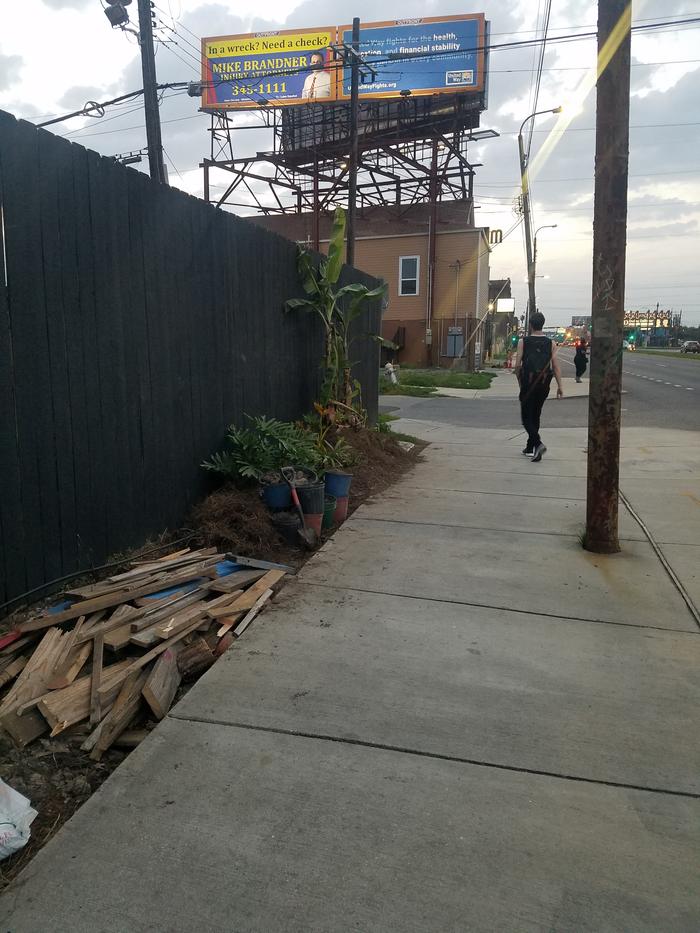 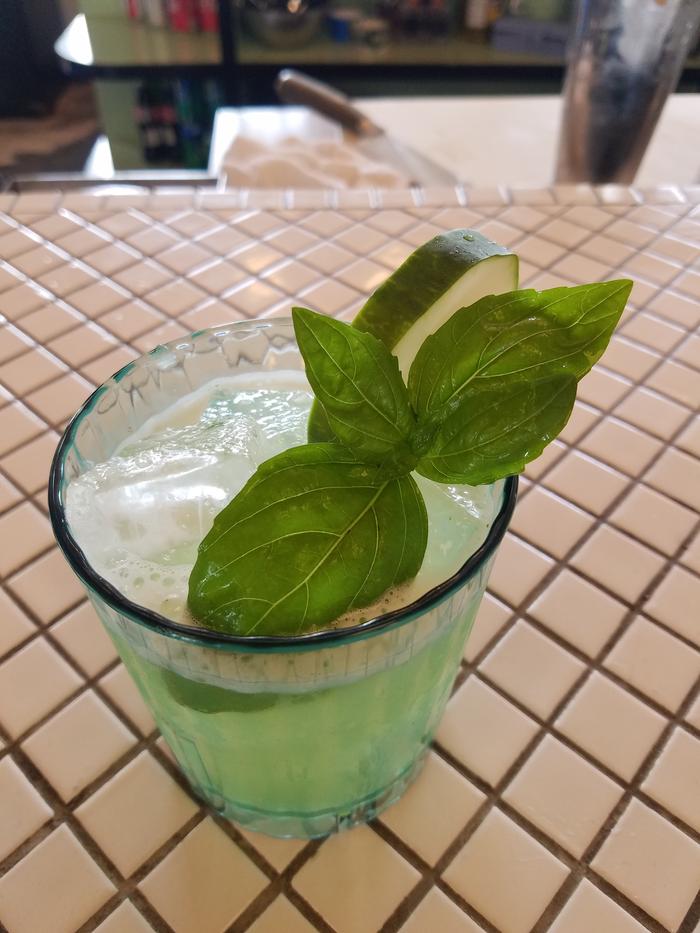 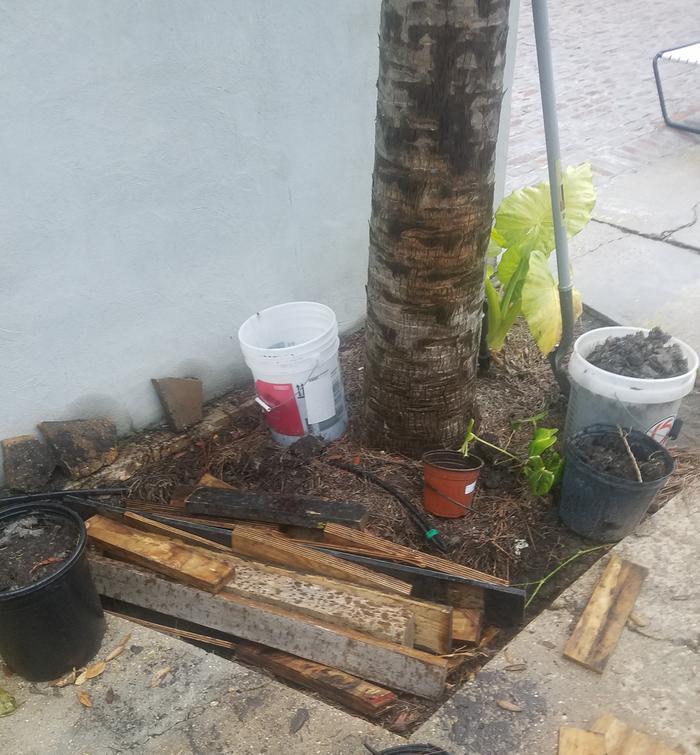 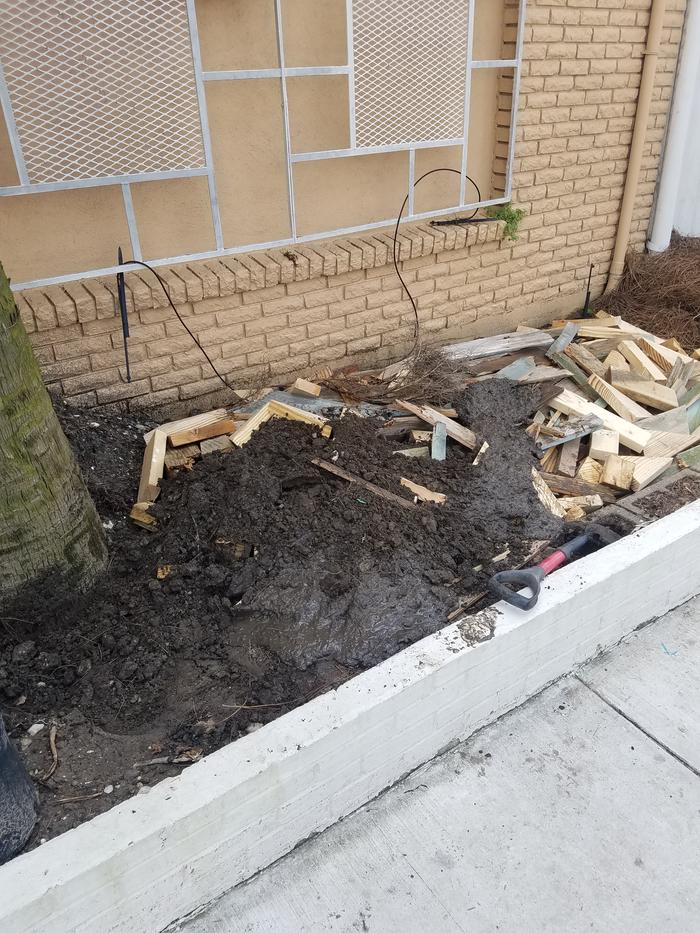 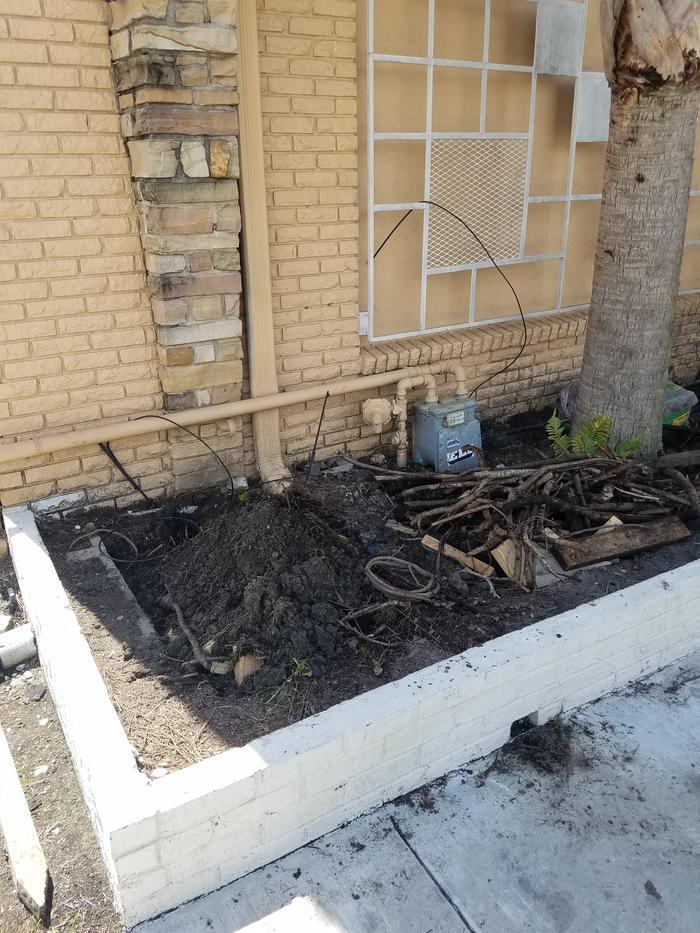 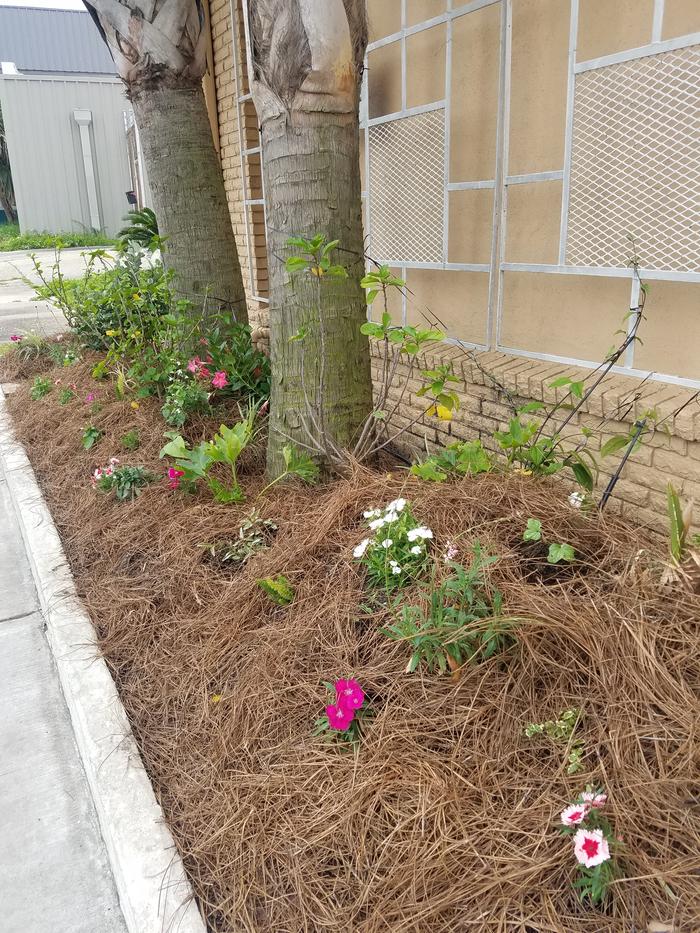 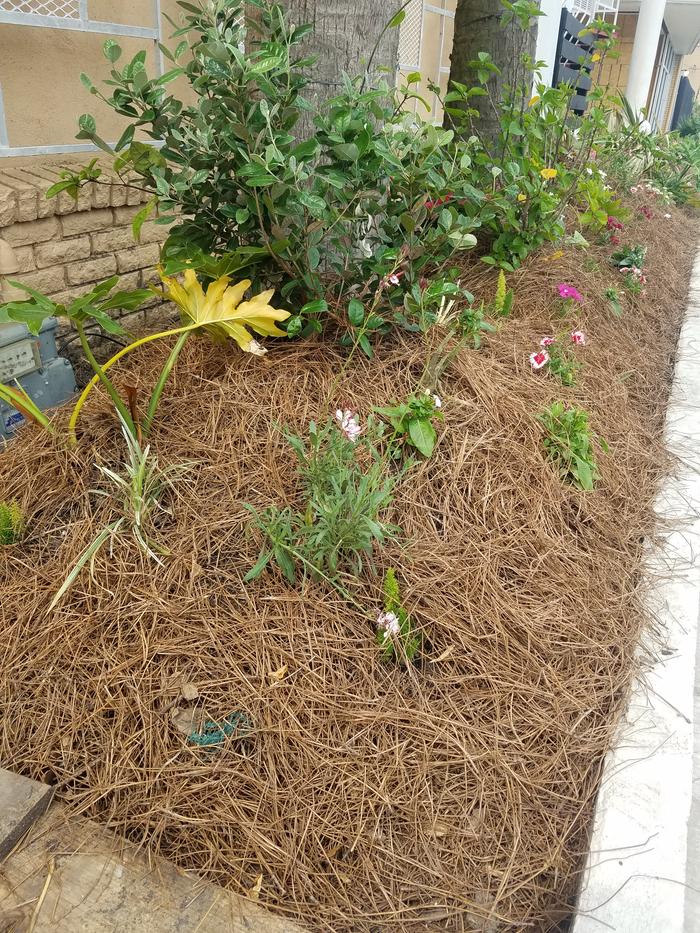 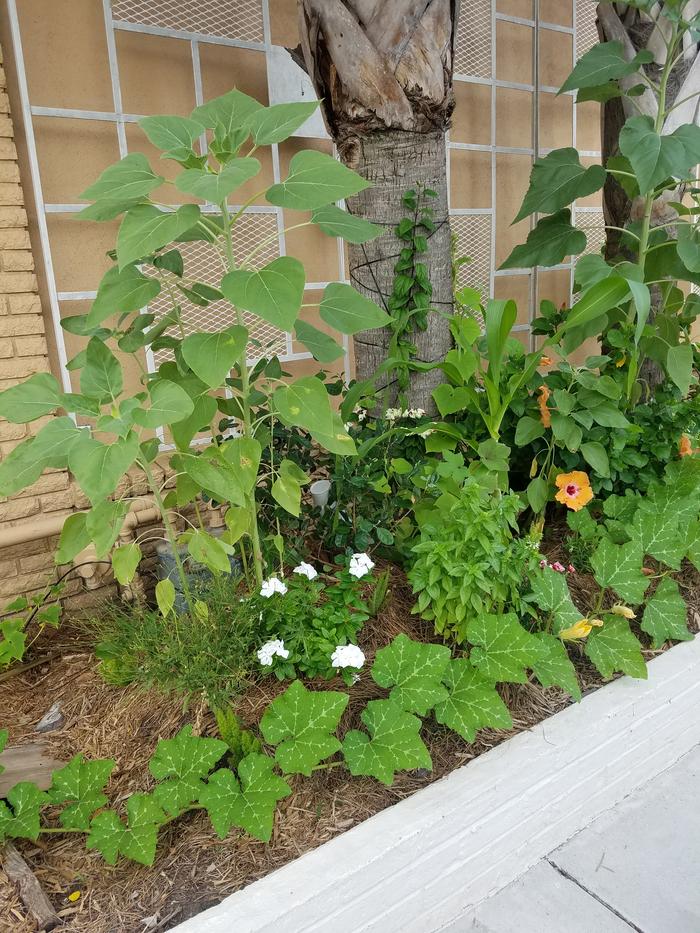 posted 2 years ago
The housekeepers, bar staff, and maintenance guy, as well as many customers, all got to learn about the process while watching the process take shape.  Plus they have enjoyed mint, rosemary, and plenty of green foliage for floral arrangements.  As far as employees, I had 7 different people help me with the work and they also learned a lot.  Prior to my involvement, only 1 person at the company had a notion of permaculture ;)  now they all do plus so many stories as the people and plants connect and interact.

posted 2 years ago
Hi Arella, that's a great project.  Two of the requirements for the BB are:

Can you provide those as well?

posted 2 years ago
Mike asked me to pop in and say something.

I think there is a lot of huge positives in what Arella has accomplished!   And, to be respectful for what we are trying to accomplish and to set precedent for the future, we do need:

- something that suggests that Arella did the work.  Something strong would be strong!   But something flimsy would be "good enough for now."

- something that suggests that Arella got paid.  Something strong would be strong!   But something flimsy would be "good enough for now."

Open to all sorts of wacky things.  Let's see if we can get this wrapped up.

posted 1 year ago
Approved BB submission
I run an "Urban Homesteading School" in my small town. For several years that included Spring and Fall "Bootcamp" weekends with multiple workshops in two tracks over a full weekend. In Mar 2016 I ran three tracks, one of them dedicated to permaculture classes presented by local PC teachers Ron Berezan and Erin Innes.

It's a bit difficult to separate out the amount I earned just from organising the permaculture workshops since my numbers are calculated over the whole weekend. However, the whole weekend netted me about $680 (for over 100 hours of work, so not exactly a great hourly wage!) so if you take 1/3 of that for the PC track that would be well over the $100.

Web page for that specific event, with class descriptions
http://uhspr.ca/classes-and-events/previous-events/spring-2016-bootcamp-food-production-and-more/

Home page for the Urban Homesteading School, with a pic of me
http://uhspr.ca/

posted 1 year ago
Note:  The BB requirements have been updated a bit

posted 1 year ago
Wondering if an equivalent barter would meet this?  IOW, if I do a day's labor on an organic farm and they pay me in produce, does that work?  Or, would I need to have them pay me for the work, and then me pay them for the produce to qualify?

The soul of the sluggard craves and gets nothing.

Julie Hoolie wrote:Wondering if an equivalent barter would meet this?  IOW, if I do a day's labor on an organic farm and they pay me in produce, does that work?

We asked Paul about it, and it seems like if the barter were worth at least $300, we would feel comfortable certifying it. It's really hard to gauge barter value for evaluators.

I have a feeling--but I honestly don't know--that we might have barter-related badge bits in the Straw Commerce badge.


Or, would I need to have them pay me for the work, and then me pay them for the produce to qualify?

I think this would be a lot easier to certify!

posted 1 year ago
barter is awsome.

I suspect for this badge we need a quantifiable number to make sure that it has the same value for everyone.  I like the idea of showing the money exchange even if it is in actuality barter.

K Wagner
Posts: 72
22
posted 1 year ago
Question: If i trade my services for a good that has $50 worth of value, would that count?

posted 1 year ago
Good question!  I know Paul answered this somewhere and it took a bit of digging.  On the Commerce badge page he says in a reply that it has to be for money, no trades or barters.

K Wagner
Posts: 72
22
posted 1 year ago
makes sense. Are there any other badges that involve barter?

posted 1 year ago
None that come to mind.  Maybe something in Community like organizing a work party could be a fit (trading donuts for labor).

Someone flagged this submission as an edge case BB.
BBV price: 0
Note: Great job!  Could you please add on picture satisfying this requirement:   - Photos of you doing the work

posted 4 months ago
I do volunteer work with a community garden, teaching classes to kids, growing plants to sell, tending bees, etc. (the business is run by a friend & fellow vet.) I volunteer in a position that would normally be a paid staff position (I don't need the money and am more than happy to do it. My kids can join to learn and help the other kids there, so occasionally I turn it into a family event). If I could get a cancelled invoice for my services, would that count?
Veterans Employment Basecamp and Organic Garden

posted 4 months ago
I think we'd need to see a check or some proof that they paid you.  If you don't deposit it, that's totally fine.